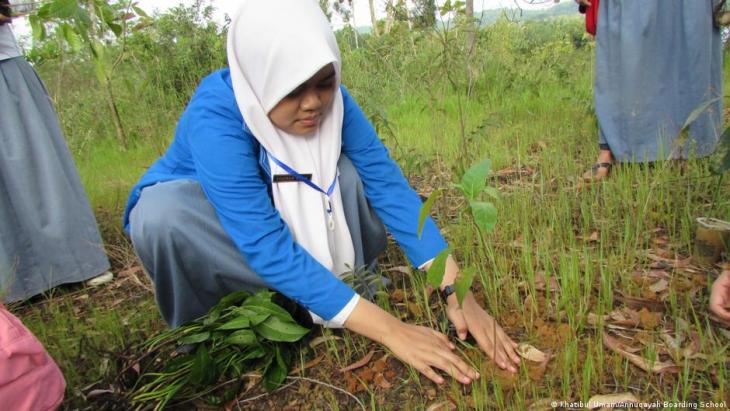 Environmental jihad
Can "green Islam" save Indonesia from climate collapse?

Calls for an environmentally-conscious form of Islam are growing in Indonesia, as climate change poses enormous ecological challenges for the country. Experts say it could change society's approach to climate efforts. Enno Hinz reports

Following the publication of an alarming report by the Intergovernmental Panel on Climate Change, Indonesia is once again at the centre of the global climate debate. As the world's largest exporter of coal and palm oil, the country has a major impact on the global climate crisis.

Yet the island state itself is increasingly affected by extreme weather events. In 2019, a severe drought led to widespread forest fires. In 2020, the country experienced massive flooding due to the heaviest rainfall in decades.

With a population of over 270 million, Indonesia faces enormous social and environmental challenges and some experts see religion as a ray of hope. Calls for an environmentally conscious Islam are growing in Indonesia, the country with the largest Muslim population in the world.

"There is no doubt that the new Islamic environmental awareness is strengthening the entire ecological movement in Indonesia," says Fachruddin Mangunjaya, chairman of the Centre for Islamic Studies at the National University in Jakarta.

A country in an environmental dilemma

Indonesia, with its more than 17,000 islands, is in a quandary. In addition to waste disposal, the two major climate sins of the country — coal-fired power and deforestation — repeatedly make for negative headlines.

Indonesia is not only the world's export champion for thermal coal, but also the largest producer of palm oil, which leads to the deforestation of large areas of forest every year. Coal and palm oil form the backbone of the Indonesian economy, which cannot grow without reliable energy and the export of palm oil. 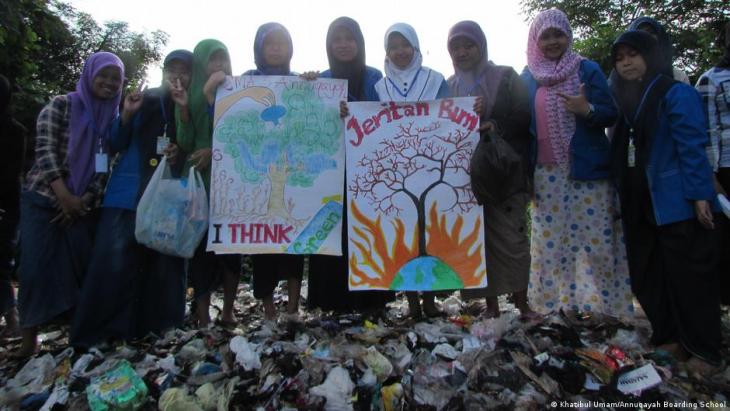 Zero carbon emissions: Indonesian president Joko Widodo called for the participation of Islamic leaders and communities in helping to achieve net-zero emissions by 2060. With a population of over 270 million, Indonesia faces enormous social and environmental challenges and some experts see religion as a ray of hope. Calls for an environmentally conscious Islam are growing in Indonesia, the country with the largest Muslim population in the world

On the other hand, this economic model harms the very people it is supposed to serve: Indonesians. Greenhouse gas emissions from power plants and deforestation are having a significant impact on the health and livelihoods of the rural population.

As a result of climate change, many of Indonesia's remote and poor provinces suffer regular droughts, exacerbating poverty in the country.

Green Islam a reason for hope?

Islam, to which almost 87% of the population in Indonesia feels affiliated, could provide a way out of the dilemma.

"The protection of nature and the environment is one of the commandments of Islam. Therefore, the use of clean energy is also ethically and morally important for Muslims," explains Indonesian anthropologist Ibnu Fikri.

Together with his colleague Freek Colombijn from the Free University in Amsterdam, he has been researching the topic of "Green Islam" in Indonesia – interaction between humans and the environment inspired by Islamic ideas and teachings.

Holding onto that principle, last year, the Ministry of Environment and Forestry signed a partnership agreement with Nahdlatul Ulama (NU), the country's largest Muslim organisation, to improve environmental management and sustainable forestry.

According to Fachruddin, however, that is not enough. The urgency for increased climate awareness has not yet reached the majority of the country's rural population and clerics. A 2020 survey by the Katadata Insight Centre shows that Indonesian citizens place the highest trust in information from religious clerics.

As a result, Fachruddin's institute in Jakarta is working specifically on building bridges between leaders in Muslim society and environmental scientists. "It is important that Islamic clerics not only understand the religious teachings, but also their significance for climate protections, so they can translate their awareness into concrete action," says Fachruddin. So far, he has trained about 1,000 Islamic clerics who practice environmental protection and provide education in various villages across the country – and the number is growing. 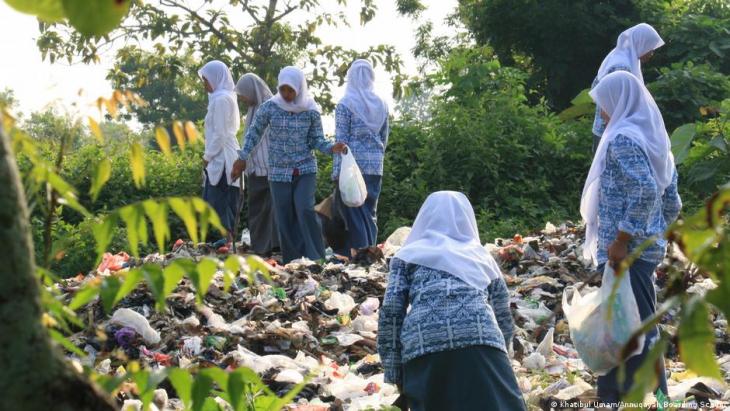 "Green Islam" means the interaction between humans and the environment based on Islamic ideas and teachings: in addition to President Joko Widodo's commitment – in tandem with Islamic leaders and communities – to set a goal of achieving net-zero emissions by 2060, the Ministry of Environment and Forestry signed a partnership agreement in 2021 with Nahdlatul Ulama (NU), the country's largest Muslim organisation, to improve environmental management and sustainable forestry. Some Islamic schools in Indonesia have also begun educating children about climate protection issues

Young people in particular need to be reached and made aware of environmental protection. "We need to think more about our future, so that our students can find answers to pressing environmental issues early on and get involved in their own communities," says Khatibul Umam, who runs an Islamic boarding school (pesantren) on the island of Madura.

Islamic boarding schools are an important part of Indonesia's education system. Umam's boarding school alone has 11,000 students. The school has made the combination of Islam and environmental protection a core concern, supporting several environmental protection projects such as reforestation, sustainable agriculture and recycling, all of which have regional roots and are inspired by Islam.

Although the direction is clear, Umam also knows that Islamic environmental activism in Indonesia is still in its infancy. "The main challenge we face, not only in our schools but in society in general, is to try to make people understand why these projects are significant, not only to us, but to all levels of society and the future generations," said Umam.

Finally, as anthropologist Ibnu Fikri admits, there is no one Islam in Indonesia. "Due to compulsory religion in Indonesia, there is a huge diversity of practitioners of Islam. For some, it's part of their daily routine. Others feel they belong less and are Muslim because they have to choose a religion."

Therefore, it is not only Islam and environmental protection that need to be reconciled in the long-term, but also different social groups.

Many experts say that a comprehensive, whole-of-society approach is needed. Fachruddin sees Indonesia's pluralism as a great opportunity. "We learn a lot from traditions from before Islam. Because of our democratic situation in Indonesia, we respect not only nature and the environment, but all people and their ideas."

Ibnu Fikri also gained this impression in his fieldwork in Indonesian communities. He describes it as "cultural environmental awareness", an interplay of religion, traditions and local practices that encourages people to protect the environment.

Even if there is a long way to go, Islam can still be a strong source of inspiration for many.

With its traditions of neutrality and non-alignment, Indonesia has had to tiptoe around the Ukraine war debate. Pro-Russia sentiment in the region complicates Jakarta's foreign ... END_OF_DOCUMENT_TOKEN_TO_BE_REPLACED

Indonesia has become a primary battleground between democratic and autocratic visions of Islam in the 21st century, with Nahdlatul Ulama pitted against Abdullah bin Bayyah, a ... END_OF_DOCUMENT_TOKEN_TO_BE_REPLACED

Research project "The Global Qur'an", brainchild of Professor of Islamic Studies Johanna Pink and sponsored by the European Research Council, analyses the history and ... END_OF_DOCUMENT_TOKEN_TO_BE_REPLACED

At a time when even some rich democracies are electing con men as their political leaders, the success of Indonesian President Joko Widodo deserves wider acclaim and appreciation ... END_OF_DOCUMENT_TOKEN_TO_BE_REPLACED

On the Indonesian island of Java, one librarian has started a mobile library, lending books to children in exchange for plastic rubbish. The idea is that they will learn to take ... END_OF_DOCUMENT_TOKEN_TO_BE_REPLACED
Author:
Enno Hinz
Date:
Mail:
Send via mail

END_OF_DOCUMENT_TOKEN_TO_BE_REPLACED
Social media
and networks
Subscribe to our
newsletter