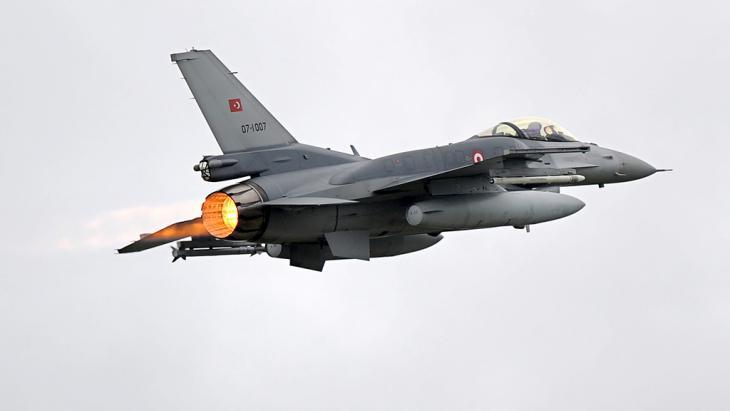 Erdogan and the Kurdish conflict
A battle for votes

For a brief moment, NATO allies thought they were witnessing a major policy turnaround when Turkey finally joined the campaign against Islamic State. But in actual fact, Ankara's first priority appears to be to move against the PKK and the HDP, the pro-Kurdish party that prevented President Erdogan's party from retaining its parliamentary majority. By Markus Bernath

For many Turks, the flashback began on the morning of Friday, 24 July. Anyone switching on the radio or television breakfast news that day would have felt transported back to the 1990s: with news of police raids across the country, footage of fighter jets in the night skies over Diyarbakir, their engines throwing out light blue flames, and reports of dead soldiers honoured as "martyrs".

It only took a few days for Erdogan, with little attempt at hedging, to recommend the arrest of Kurdish members of parliament – just like in 1994, when four prominent politicians from the "Democracy Party" (DEP) were led away from parliament in Ankara by police. Turkey is again waging war against its Kurds.

But there appear to be many differences between the situation now and 25 – 30 years ago when the Turkish army directed itself in a war against the "Kurdistan Workers' Party" (PKK) in the south-east of the country, burning down civilian villages. This time, however, it's all about politics and vote-winning.

"He will set everything in motion to salvage his power," says Erol Ozkoray, referring to the Turkish President Recep Tayyip Erdogan. Ozkoray, a civil rights activist, journalist and former political advisor, had already issued a warning shortly before the 7 June parliamentary poll that the head of state would trigger a war in his own nation and with his neighbours if it served his interests.

"The idea of political change does not exist for Erdogan. He feels as though he has been instated by God," says Ozkoray today. He has been living with his wife Nurten in exile in Sweden since July. Together they wrote a book about the 2013 Gezi protests which contained a list of graffiti slogans criticising Erdogan that were daubed on houses in Istanbul. As a consequence, Erol Ozkoray received a suspended prison sentence of just under one year. 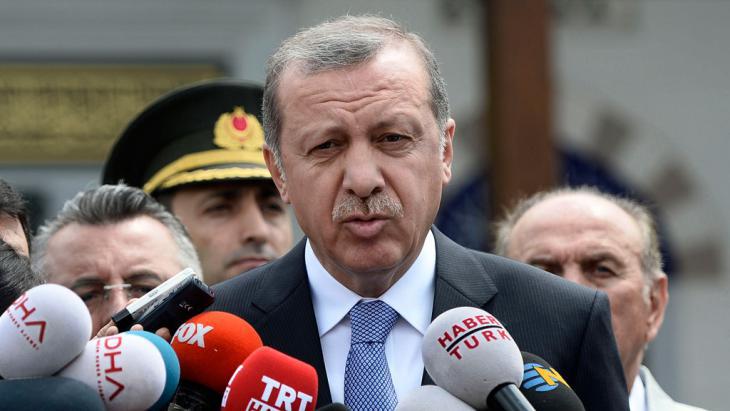 Is IS just a pretext for the fight against the PKK? Ankara had for a long time responded hesitantly to US calls for it to expand its campaign against IS. But this stance changed following deadly attacks on Turkish soil blamed on IS. Turkey has been carrying out air raids ever since, declaring that these are targeted at PKK positions in northern Iraq and IS fighters in Syria. However, observers say that the banned Kurdistan Workers' Party is coming under attack much more frequently than IS. Pictured here: Turkish President Recep Tayyip Erdogan

A tactical move by Ankara

But even commentators in Turkey who express themselves in less polemic terms perceive the newly relaunched campaign against the PKK first and foremost as a tactical move by the political leadership in Ankara.

Cengiz Candar, Murat Yetkin, Semih Idiz, Hayko Bagdat, Murat Belge and other opinion leaders within the country's nonetheless small, politically liberal movement all reach a similar conclusion: they believe that the elections of 7 June and the loss of the absolute majority previously commanded by Erdogan's conservative-Islamic AKP after almost 13 years of single-party rule are the reason for the campaign against the Kurds. The AKP hopes that a new poll in the autumn of this year or in 2016 will usher the Kurdish-dominated, left-liberal HDP out of parliament and reinstate Erdogan's majority.

Kadri Gursel, another respected commentator, lost his job at the daily newspaper "Milliyet" because he expressed doubts over the sincerity of the Turkish military campaign against the IS terror militia, which had been started at the same time as the offensive against the PKK in the early hours of 24 July.

The Kurds are regarded as the real target of the "war on terror" declared by Prime Minister Ahmet Davutoglu. Of the 1,300 people detained in Turkey in the first week after the start of military operations, only around 100 were either alleged supporters or members of Islamic State.

The vast majority of those detained were accused of being members of the PKK or its youth organisation the "Patriotic Revolutionary Youth Movement" (YDG-H). A smaller group is accused of supporting the left-wing extremist terrorist movement the DHKP-C.

Initially hailed as a major security policy turnaround by NATO member states, the battle against IS in Syria close to the border with Turkey turned out to be a sideshow in contrast to the obviously much more important campaign against the Kurdish underground army with its base in northern Iraq, and the predominantly Kurdish parliamentary party in Ankara. The French political scientist and Turkey expert Jean Marcou concludes that Turkish foreign policy has become even more ambiguous and more difficult for Turkey's partners in Europe and the US to understand. 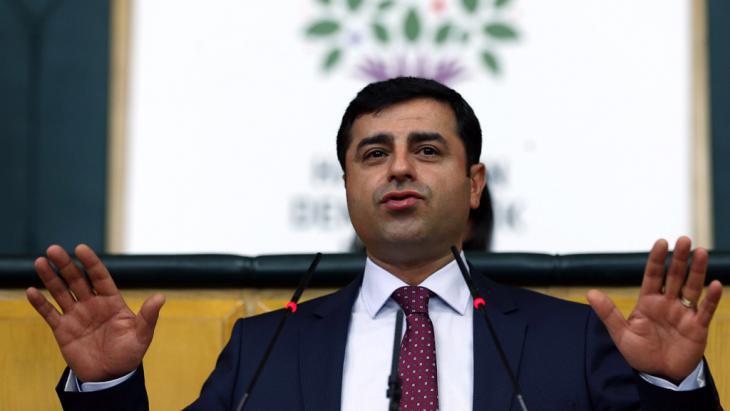 Two months after parliamentary elections in Turkey, the pro-Kurdish opposition party HDP sees little prospect of a government being formed. "Turkey is facing the prospect of a snap election," said HDP co-leader Selahattin Demirtas (pictured here), adding that President Erdogan is currently doing everything within his power to damage the reputation of the HDP with propaganda

Yet it is not just the AKP engaging in domestic policy manoeuvring with the Kurds. The right-wing nationalist opposition MHP, which is currently formulating conditions for temporary support of a minority AKP government until November or spring 2016, is doing the same.

"I find it frightening that the political climate changes as though at the touch of a button," says Cengiz Gunay, a researcher at the Austrian Institute for International Affairs (OIIP) in Vienna. "Turkish politicians are now trying to drum up votes with nationalist, martial rhetoric. These are old, well-rehearsed reflexes. I just hope the voters don't fall for it."

Opinion polls continue to show that Turkish people are not allowing their judgement to be clouded by war, raids and the fear of attacks. At the moment, these polls indicate that a snap election would yield the same results as last June: the HDP would once again clear the 10-per-cent hurdle; the AKP would once again become the strongest parliamentary bloc with just over 40 per cent of the vote, but without a governing majority.

But given that things can change so quickly in politics in Turkey, anything can happen between now and a new poll that may be held in November or early 2016. Above all, the position of the HDP and its co-leader Selahattin Demirtas appears to be increasingly precarious.

Demirtas issued a personal challenge to President Erdogan in the run-up to the June poll. He declared that the HDP would prevent Erdogan from obtaining a large enough majority in parliament, thereby thwarting his plans to rewrite the constitution to expand the powers of the president.

Erdogan's close advisor Yalcin Akdogan, one of Turkey's serving deputy prime ministers, has also since confirmed that Demirtas' attack on Erdogan was a provocation that contributed to the end of the peace process with the Kurds.

"The HDP is in difficulties due to the military escalation," observes Cengiz Gunay. "It is again being pressed into the Kurdish identity mould. And who's to say that the PKK won't ditch Demirtas if he criticises them too openly?"

Home
Print
Newsletter
More on this topic
The Kurdish conflict: Barzani in a tight spotTurkish military operations against IS and the PKK: Erdogan's double strategyKurds in Iraq: When hope turns to fearTurkey after the general election: No balcony speeches for Erdogan
Related Topics
'Islamic State' | IS, Ahmet Davutoglu, Kurdish-Turkish Conflict, Kurds, PKK, Recep Tayyip Erdogan, Selahattin Demirtas
All Topics

Just as the Islamic Revolution fundamentally changed Iran 43 years ago and had an impact far beyond the country's borders, the current wave of protests sweeping the country is set ... END_OF_DOCUMENT_TOKEN_TO_BE_REPLACED

Fariduddin Attar’s "The Conference of the Birds", one of the seminal works of Islamic mysticism, has recently been published in sumptuously illustrated German translation. It ... END_OF_DOCUMENT_TOKEN_TO_BE_REPLACED

Like Christianity, Europe's history is one of migration. Both have strong roots in the Orient and in cultures thousands of years old. Cultural historian Bernhard Braun invites us ... END_OF_DOCUMENT_TOKEN_TO_BE_REPLACED

When she ascended the throne, millions of Muslims still lived under British rule. Later, Elizabeth II appealed for tolerance in a multi-religious society. She was the first ... END_OF_DOCUMENT_TOKEN_TO_BE_REPLACED

Bachtyar Ali sends the hero of his latest novel – "Mein Onkel den der Wind mitnahm" – literally flying. Jamshid is so thin after his years as a political prisoner that a gust of ... END_OF_DOCUMENT_TOKEN_TO_BE_REPLACED
Author:
Markus Bernath
Date:
Mail:
Send via mail

END_OF_DOCUMENT_TOKEN_TO_BE_REPLACED
Social media
and networks
Subscribe to our
newsletter