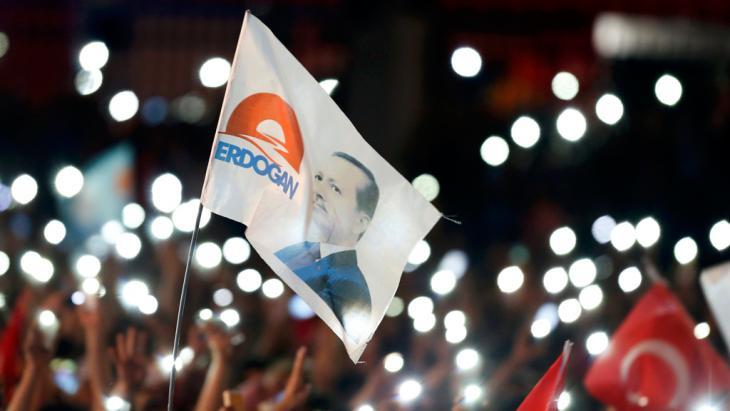 What Erdogan did next

Election results can bring political stability. In the case of Turkey, however, Erdogan's election as president is likely to bring the country the exact opposite: some serious domestic political conflicts are now on the cards. A commentary by Omer Erzeren in Istanbul

Recep Tayyip Erdogan is the new president of Turkey. The strong man who has guided the country's political fortunes as prime minister for over a decade received almost 52% of the vote in a direct presidential election.

According to the constitution, the office of president in Turkey is largely representational. But Erdogan, who will use any means available to rule autocratically, has long since made it clear that these constitutional limitations mean nothing to him. He wants to rule as if in a presidential system of government. He does not tolerate political competition. Turkey's next prime minister is likely to be nothing more than an enforcement officer.

Erdogan's politics in recent years have polarised Turkish society. The secular urban middle classes were not only excluded from political participation but were declared enemies and traitors to their fatherland.

As prime minister, Erdogan liked to rant and rave at editors-in-chief whenever a newspaper article or a TV show did not fit in with his agenda. He recently called a journalist who wrote a piece criticising the government a "malicious woman". Not only did Erdogan manage to get the entire media scene to dance to his tune, he also wielded a powerful propaganda apparatus, which came in very useful during the presidential campaign.

Trying to muzzle independent media: in the spring of 2014, Erdogan's government blocked Twitter and YouTube for publishing accusations of corruption against him. The blocks have since been lifted by Turkey's Constitutional Court

The recently elected president is politically responsible for the deaths in Gezi Park, where young people revolted against the country's cultural totalitarianism. One measure of the extent to which Turkey's political culture has degenerated is how Erdogan allowed the audience at a public rally to boo the mother of a 15-year-old who had died in the protests. Racism and anti-Semitism are part of his repertoire, opportune tools for winning votes.

The rule of law, the separation of powers and parliamentary control are all thorns in Erdogan's side. When the Constitutional Court declared his blocking of Twitter and YouTube unconstitutional, he reacted by vilifying the judges. He then passed laws designed to ensure a compliant judiciary. Only a few months ago, the powers of the secret service were expanded to an extent known only from past dictatorships.

The booming capitalism in Turkey over the last decade buoyed the rise of political Islam and gave Erdogan the political credit he needed to extend his power. But the boom is reaching its limits. Already, the country's economic growth relies heavily on the fragile construction industry, which is fed by fat state contracts and cheap government loans.

Now, however, its funding is on shaky ground. The economic technocrats in the Erdogan administration, who promoted growth and sought to balance the budget, are now in the process of being replaced by notorious yes-men who intend to subordinate the economy to Erdogan's political interests.

The most recent example is the Bank Asya, driven to bankruptcy for political reasons because the owners were closely associated with Erdogan's enemy, the preacher Muhammed Fethullah Gulen. The supervisory authority for banking can go ahead and launch a public outcry; Erdogan doesn't care. He doesn't think much of independent institutions, whether a central bank or a banking authority.

Erdogan's election cannot be attributed to rational political thinking. For the first time in Turkey's history, a politician's supporters are cheering him on with slogans borrowed from football. The "heavy hitter" who shoots the goals has them all fired up. But the celebrated striker can quickly turn into a scapegoat if he fails to score and his team is forced to concede defeat. The final match has yet to be played. 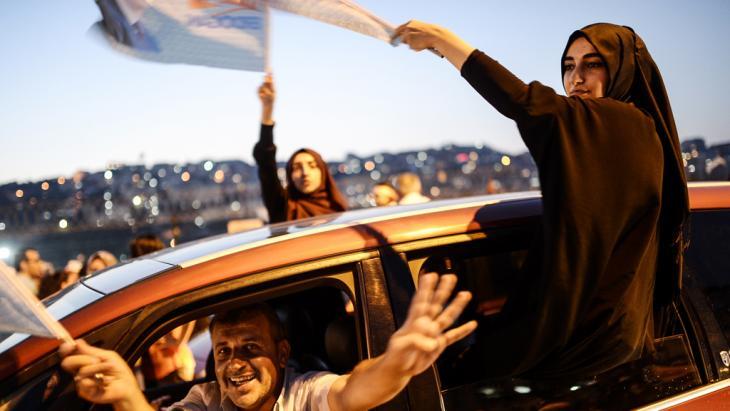 Celebrations on the streets of Istanbul: "The new Turkey Erdogan proposes is an Islamic Turkey. He has long since broken the power of the military. Repression and state-sanctioned violence will from now on be the job of his police state," writes Ömer Erzeren

Erdogan will have to try and establish a presidential system that is largely exempt from parliamentary control. He doesn't have much time. Parliamentary elections are due to take place next year, and it is not certain that Erdogan's party will gain a majority.

It is unlikely that Erdogan will get the majority he needs to amend the constitution. Erdogan will not have it easy: almost half the Turkish population rejects his policies and did not vote for him. What's more, he will also have a difficult time leading his own party "from a distance" as president.

Erdogan promised a new Turkey. Mustafa Kemal Ataturk made the same promise nearly a century ago: a secular, republican nation-state. Repression and state-sanctioned violence were the means he used for modernisation and change: decreed from above, supervised by the military and clad in makeshift parliamentary decisions. Whenever the train threatened to go off the rails, military coups put it back on track.

The new Turkey Erdogan proposes is an Islamic Turkey. He has long since broken the power of the military. Repression and state-sanctioned violence will from now on be the job of his police state. Islamisation is being imposed from above, with little security men standing guard in underground stations to make sure young people don't kiss.

Populism and elections provide the backdrop for plans to reorganise society. But Turkey is not the same country it was one hundred years ago. Chances are that Erdogan's project will fail.

On 15 June, the "Islamkolleg" in Osnabruck officially launched its new training programme for imams in German. The college is intended to prepare Islamic theologians for their ... END_OF_DOCUMENT_TOKEN_TO_BE_REPLACED

Turkey's parliamentary and presidential elections are scheduled for June 2023. But they are already casting a shadow. While the opposition is calling for early elections, ... END_OF_DOCUMENT_TOKEN_TO_BE_REPLACED

By stage-managing his re-election in a poll widely dismissed as a farce, Syria's President Bashar al-Assad has killed two birds with one stone: he has forced his compatriots to ... END_OF_DOCUMENT_TOKEN_TO_BE_REPLACED

Recep Tayyip Erdogan, disappointed by the European Union’s reluctance to integrate Turkey into its ranks, has re-directed his country’s diplomacy toward the Maghreb and Africa to ... END_OF_DOCUMENT_TOKEN_TO_BE_REPLACED

Having taken control of the traditional media, Turkish President Erdogan is now extending his reach to the social networks. A new law has been passed to rein in major digital ... END_OF_DOCUMENT_TOKEN_TO_BE_REPLACED

Although a unity government was formed in Libya in March 2021, tensions and possible crises between the political actors are already emerging. What problems does the country face ... END_OF_DOCUMENT_TOKEN_TO_BE_REPLACED
Author:
Ömer Erzeren
Date:
Mail:
Send via mail

END_OF_DOCUMENT_TOKEN_TO_BE_REPLACED
Social media
and networks
Subscribe to our
newsletter