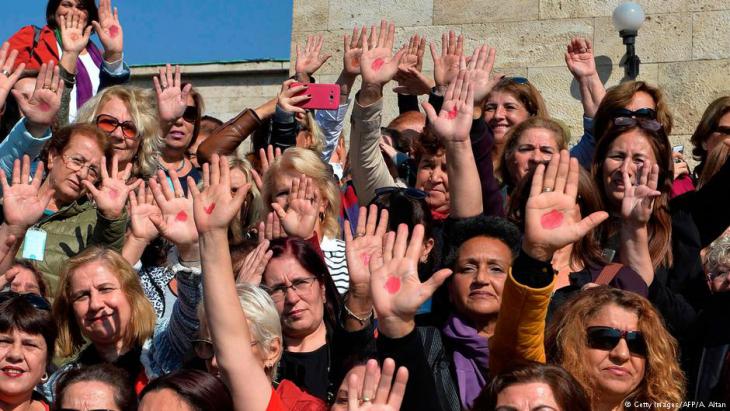 On 18 October, the Turkish parliament approved a controversial bill that in future will allow Islamic muftis to register weddings. Critics fear that this will erode the civil rights of women and expose more girls to the dangers of underage marriage. Ylenia Gostoli reports from Turkey

The shadow of a changing Turkey hangs over recent debates about the ″mufti marriage bill″, an article in draft legislation about civil registration services that was originally submitted to parliament on 25 July. The article, which would allow provincial and local muftis – Islamic legal authorities who are also civil servants – to register weddings alongside municipality registrars, was approved during a vote on the draft on 18 October, amid strong criticism from opposition parties CHP and HDP. They argue that it is against Turkey's constitution and have vowed to continue objecting to it legally.

Women's rights groups who oppose the bill have taken to the streets across the country in recent weeks, with 100 women′s and LGBTI organisations launching a campaign called ″For A Free and Equal Life, These Laws Shall Not Pass″.

Violating the principle of secularism

″Assigning a religious official to handle civil code matters violates the principle of secularism,″ Gulsum Kav, a medic and the chairwoman of the women's rights group We Will Stop Femicide, explains. Her views echo a widespread concern among secularists over religion's growing role in public life in Turkey.

Opponents of the law also believe it will lead to an increase in child marriages due to a lack of oversight over local religious authorities that will be given the power to register marriages.

Kadem (Women and Democracy Association), an organisation aligned with the ruling AK party's agenda, released a statement supported by more than 90 NGOs, in which they condemn the criticism as ″baseless″, and argue that it will help prevent the practice of ″secret″ religious marriages, which leave women with no rights.

″Even if religious marriages are not legal in Turkey, these kind of marriages continue to lead to some abuse, especially of women,″ a spokesperson for the organisation explains. ″To prevent exploitation and abuse, there is a big need for [religious marriages to be legalised] as a requirement of a democratic, secular and constitutional state.″

Fearing an increase in abuse

According to a 2016 survey , 97 percent of couples in Turkey go through both a civil and a religious marriage ceremony. However, the number of purely religious marriages is believed to be under-reported due to the absence of a paper trail.

″There are three main reasons for conducting purely religious marriages,″ Feride Eralp, a 27-year-old translator who campaigned against the law, explains. ″Men are either trying to marry more than one woman, marry underage, or prevent women from asserting their rights that stem from the civil code, such as equal rights to property. We know from research that the great majority of unofficial marriages or underage unofficial marriages are conducted by official imams who are on the state payroll.″

Turkey's parliamentary and presidential elections are scheduled for June 2023. But they are already casting a shadow. While the opposition is calling for early elections, ... END_OF_DOCUMENT_TOKEN_TO_BE_REPLACED

By stage-managing his re-election in a poll widely dismissed as a farce, Syria's President Bashar al-Assad has killed two birds with one stone: he has forced his compatriots to ... END_OF_DOCUMENT_TOKEN_TO_BE_REPLACED

Recep Tayyip Erdogan, disappointed by the European Union’s reluctance to integrate Turkey into its ranks, has re-directed his country’s diplomacy toward the Maghreb and Africa to ... END_OF_DOCUMENT_TOKEN_TO_BE_REPLACED

Having taken control of the traditional media, Turkish President Erdogan is now extending his reach to the social networks. A new law has been passed to rein in major digital ... END_OF_DOCUMENT_TOKEN_TO_BE_REPLACED

Although a unity government was formed in Libya in March 2021, tensions and possible crises between the political actors are already emerging. What problems does the country face ... END_OF_DOCUMENT_TOKEN_TO_BE_REPLACED

END_OF_DOCUMENT_TOKEN_TO_BE_REPLACED
Social media
and networks
Subscribe to our
newsletter