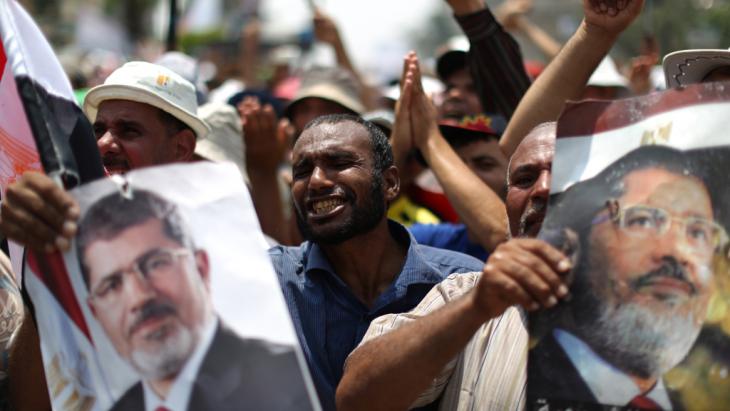 The Problem is Authoritarianism, Not Islam

Is Islam fundamentally incompatible with democracy? Time and again events compel us to ask this question. And yet it is a question that obscures more than it illuminates. An essay by Dani Rodrik

Turkey, Egypt, and Tunisia are very different countries, but one thing that they share are Islamist governments (at least until recently in Egypt's case). To varying degrees, these governments have undermined their democratic credentials by failing to protect civil and human rights and employing heavy-handed tactics against their opponents. Despite repeated assurances, Islamist leaders have shown little interest in democracy beyond winning at the ballot box.

So those who believe that the removal of Egyptian President Mohamed Morsi's government was justified have a point. As the Muslim Brotherhood's rule became increasingly authoritarian, it trampled on the ideals and aspirations of the Tahrir Square revolution that toppled former President Hosni Mubarak in 2011.

Nonetheless, the support that the military coup received from many Egyptian liberals is difficult to fathom. Clever word games cannot hide the essence of what happened: a government that came to power in a fair election was overthrown by the army.

The military as a corrective for derailed Islamism?

Some believe that military interventions can serve as a useful course correction. US Secretary of State John Kerry said that the Egyptian army was "restoring democracy". And the former US ambassador James Jeffrey drew on Turkey's experience, and the 1980 coup in particular, to argue that the military could help in "moderating Islamist movements". 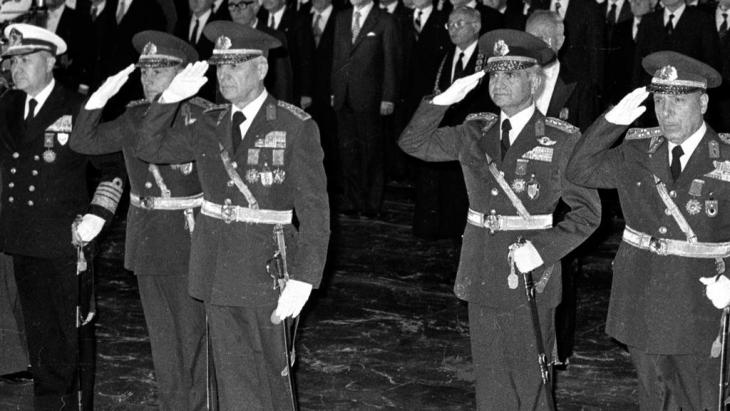 The Turkish military was not interested in governing directly, and handed power back to civilian governments after its coups. "Even so, its repeated interventions greatly harmed the development of a democratic political culture," Dani Rodrik writes. Pictured: The generals of the 1980 coup in Ankara, Turkey

The notion that a politically transcendent impartial arbiter can step in to prevent abuse of power and reinvigorate democracy is an attractive one. But it is belied by Turkey's own history. True, the Turkish military was not interested in governing directly, and handed power back to civilian governments after its coups. Even so, its repeated interventions greatly harmed the development of a democratic political culture.

The norms of proper political behavior

Ultimately, democracy relies on an implicit quid pro quo among contending groups, according to which each agrees to protect the others' rights in exchange for recognition of its entitlement to govern should it win an election. Constitutional provisions alone cannot ensure such an outcome, for those in power can easily override them. Instead, norms of proper political behavior must become embodied in the polity's enduring institutions – its political parties, parliaments, and courts – in order to prevent abuse of power.

What sustains these norms is the knowledge that undermining them will have consequences that are damaging to all. If I do not protect your rights while in power today, you will have little reason to respect mine when you come to power tomorrow.

When an outside force such as the military interrupts this game, either directly or because one of the parties can rely on its intervention, the dynamics of political behavior change irrevocably. The loss of continuity in political parties, parliamentary procedures, and judicial processes encourages short-term calculation and spawns illiberal practices. This is exactly the malady of young democracies. 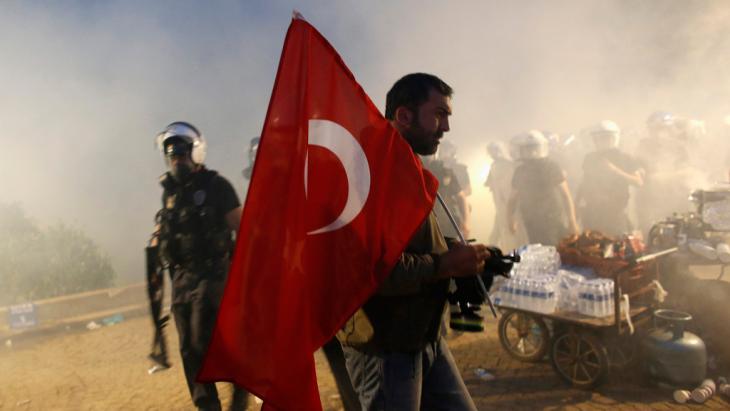 Absence of trust: "If I do not protect your rights while in power today, you will have little reason to respect mine when you come to power tomorrow." - Erdogan's strongman tactics are basically rational and a direct result of Turkey's lack of democratic culture, Rodrik writes

It is also the problem that plagues Turkish democracy, despite its longer track record. When Prime Minister Recep Tayyip Erdoğan's Justice and Development Party (AKP) came to power in 2002, it not only lacked a democratic culture, but also had much to fear about how the secularist-military old guard might react. So it behaved exactly according to its fear, launching a series of show trials targeting senior military officials and other perceived opponents. When Erdoğan's government eventually lost the support of liberals who had initially supported it, it cracked down on the media and freedom of expression.

Given this backdrop of repression and punctuated democracy, the failure of Islamists in Egypt and Turkey tells us less about Islam's compatibility with democracy than we might think. Did Morsi and Erdoğan behave as they did because of their religious ideologies, or would most political leaders seeking to retain power have acted in similar ways in their position? Latin America, where Islam plays no political role, has no shortage of populist strongmen who routinely violate civil liberties and political rights.

None of this is to condone the abuse of power by Islamist leaders. But, just as the Turkish military's repeated interventions against a perceived Islamist threat have impeded democracy, so the Egyptian military's toppling of Morsi will not help to restore it. An entity that is authoritarian and hierarchical in nature cannot be relied on to protect and promote a democratic transition. A case can be made for military intervention when a country finds itself on the edge of civil war, as Turkey was in 1980 (and as Egypt arguably was in July); but one should not confuse restoring order with restoring democracy. 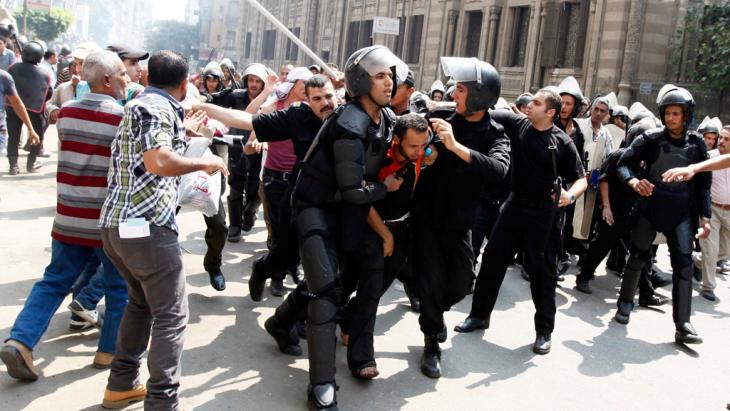 A dictatorial installment of liberal democracy? According to Dani Rodrik, repeated military interventions against a perceived Islamist are an impediment to democracy. Pictured. protests against Morsi's deposition by the military

While the battle for democracy must be won or lost at home, outsiders do have a role to play. International actors such as human-rights organizations can usefully document and publicize rights violations and other abuses of power.

Democratic countries – particularly the United States and members of the European Union – can denounce authoritarian practices with a clear voice and resist the temptation of cozying up to regional bullies for short-term strategic advantage. Given economic globalization and global communications, autocratic rulers derive almost as much strength from their international standing as they do from their control of domestic institutions.

What does not help – and in fact backfires – is for outsiders to view the political crisis of Middle Eastern societies as the result of an Islamist-secularist divide. This perspective plays directly into the hands of authoritarian rulers like Erdoğan, who can leverage the perceived Islamophobia of foreign powers to mobilize their political base. Human-rights abuses and violations of the rule of law should be denounced for what they are – without linking them to culture or religion.

Dani Rodrik is Professor of Social Science at the Institute for Advanced Study, Princeton, New Jersey. He is the author of One Economics, Many Recipes: Globalization, Institutions, and Economic Growth and, most recently, The Globalization Paradox: Democracy and the Future of the World Economy.

The Arab world suffers from a system in which people are intolerant of "the other". This racist environment contributes to the growth of hostility and antagonism towards anyone ... END_OF_DOCUMENT_TOKEN_TO_BE_REPLACED

In the age of corona, Ankara's regional power strategy is twofold: on the one hand, Turkey is engaged in a charm offensive to revamp its political image, which has suffered lately ... END_OF_DOCUMENT_TOKEN_TO_BE_REPLACED

Why do so many people in Arab countries trust the armed forces, even though most armies in the region are highly corrupt? Abdalhadi Alijla has the answers END_OF_DOCUMENT_TOKEN_TO_BE_REPLACED

Given the numerous civil society initiatives that have emerged during coronavirus, Egyptian writer and journalist Khaled al-Khamissi finds his faith in his fellow Egyptians ... END_OF_DOCUMENT_TOKEN_TO_BE_REPLACED

In 2017, Sarah Hegazy was arrested in Cairo for displaying a rainbow flag, the symbol for homosexuality and queerness, at a concert. The activist recently took her own life in ... END_OF_DOCUMENT_TOKEN_TO_BE_REPLACED
Author:
Dani Rodrik
Date:
Mail:
Send via mail

END_OF_DOCUMENT_TOKEN_TO_BE_REPLACED
Social media
and networks
Subscribe to our
newsletter