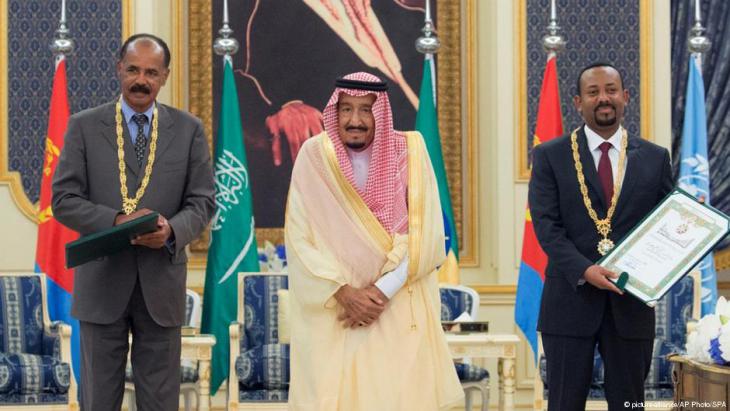 Ethiopia, Eritrea, Saudi Arabia and the UAE
Winds of change in the Gulf

Two refugees detained in Egypt are facing deportation to Eritrea. The expulsion of the Eritreans, who have been incarcerated in Cairo for more than eight years, has been halted ... END_OF_DOCUMENT_TOKEN_TO_BE_REPLACED

Blending East African, Bollywood and Arab music traditions, Groupe RTD's "The Dancing Devils of Djibouti" is not only a stunning album, it is also the first internationally- ... END_OF_DOCUMENT_TOKEN_TO_BE_REPLACED

A team of investigative journalists involving the Deutsche Welle have discovered that German weaponry and tech play a far greater role in the Yemen conflict than previously ... END_OF_DOCUMENT_TOKEN_TO_BE_REPLACED

How do authoritarian regimes respond to EU initiatives to stem migration? A recent publication by the German Institute for International and Security Affairs (SWP – Stiftung ... END_OF_DOCUMENT_TOKEN_TO_BE_REPLACED

The EU claims that the migration pact with Africa is a completely new initiative. Rather than reshaping patterns of migration, however, Europe′s desperate politics of symbolism ... END_OF_DOCUMENT_TOKEN_TO_BE_REPLACED

END_OF_DOCUMENT_TOKEN_TO_BE_REPLACED
Social media
and networks
Subscribe to our
newsletter