While the European Union criticises the lack of far-reaching reforms in Turkey, Ankara warns of EU fatigue among its citizens. The negotiations surrounding the accession of Turkey to the EU are making very little progress. Daniela Schröder sums up the gloomy atmosphere in Brussels and Ankara 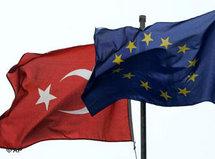 Although Turkish leaders are optimistic that their country will fulfil the conditions for EU membership by 2013, it is not certain when the European Union will be ready to admit Turkey into the fold

​​"We pretend that we are going to let you in some day while you pretend that you are implementing reforms …" is the way one long-serving EU diplomat describes the current state of the EU's accession negotiations with Turkey. There are more signs of stagnation than of progress; neither side is certain what the ultimate goal is.

Even the European Parliament's most recent progress report on Turkey contains no surprises: Europe's list of gripes is well known and Brussels is pushing for an acceleration of political reforms.

Despite the fact that Ankara is still officially working towards accession to the EU, there is no real enthusiasm. During a recent high-level meeting with the EU, the Turkish foreign minister, Ali Babacan, warned that his compatriots' initial enthusiasm for the EU and their willingness to accept reforms is waning as a result of the slow pace of negotiations.

According to Ayhan Kaya, director of the Europe Institute at Istanbul's Bilgi University, this dwindling support is no surprise given the EU's indecisiveness. Says Kaya: "The problem is that the EU does not have a vision for its future, which makes it considerably less attractive for Turkey." 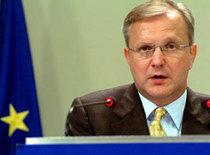 ​​Nevertheless, Olli Rehn, the EU's commissioner for enlargement, will not be deterred from the enlargement process by the current crisis. He is adamant that the EU must keep its promises, not only in general, but more specifically to Turkey.

Brussels has been negotiating with Ankara about accession to the EU since October 2005. Rehn predicts that Turkey could accede to the EU in 10 to 15 years provided it charts a consistent course of reform.

In the European Parliament, however, there is growing scepticism that Ankara will manage this. Elmar Brok, the CDU's expert on foreign affairs, accuses Recep Tayyip Erdogan's government of "having absolutely no intention of adapting its canon of values to European standards." He also believes that the limit to Turkey's ability to reform has been reached.

MEP Klaus Hänsch of the SPD feels that the EU must not be allowed to make any more concessions regarding accession criteria, as it did in the case of Bulgaria and Romania and as it looks likely to do in the case of Croatia.

President Nicolas Sarkozy of France won important votes in last year's presidential election by promising to keep Turkey out of the EU.

Despite the fact that the EU Commission recently put a damper on his plan to set up a "Mediterranean Union" as an alternative to Turkish membership of the EU and the fact that most EU Member States are still in favour of Turkey's accession, Antonio Missiroli of the European Policy Centre in Brussels feels that the tide could yet turn.

Says Missiroli: "If, after the elections in 2009, Germany were to be ruled by a conservative government instead of a grand coalition, there would be a Franco-German alliance against Turkey's membership." 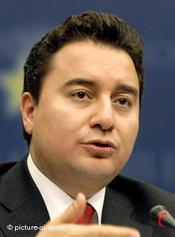 "Whenever the question of whether Turkey belongs to Europe is raised, people in Turkey get the feeling that we are just not wanted," says Turkish Foreign Minister Babacan

​​He went on to say that positions could become even more entrenched if the pro-Turkish UK were to distance itself further from the EU.

The government of the EU's Member States unanimously approved the start of accession negotiations with Ankara. The joint objective of these negotiations is EU membership. That being said, even if Turkey does meet all the EU's stipulated accession criteria, it will not automatically be granted membership.

The European Parliament's latest report on Turkey emphasises that the outcome of the negotiation process is "not a foregone conclusion". The hurdles to be overcome by Turkey are higher than they have ever been for a country seeking membership.

The reason for this is that at the end of negotiations, the EU intends to investigate whether it can cope both economically and politically with Turkish accession.

If Turkey ever wants to join, that is. "The problems within the EU are not going to diminish and the differing opinions on Turkish accession are not going to go away," predicts EU expert Sarah Seeger of the Centre for Applied Policy Research in Munich.

Anti-Ankara alliances in the EU

The anti-Ankara alliance in the EU - which is headed up by France, Austria, and conservatives in Germany - argues that Turkey simply doesn't fit into Europe and that it is much too big, much too poor, and much to different.

Other arguments put forward by those opposed to Turkish accession are that the heavily nationalist climate in the country on the border between Europe and Asia is proof that Turkey would never make a good European.

Conservative MEPs also warn that the attempt to ban Turkey's Islamic/conservative ruling party, the AKP, is the most recent illustration of the instability of Turkish politics.

Seeger considers the regular reports tabled by the Commission in Brussels and the European Parliament to be "counterproductive". She emphasises the money and effort it costs a society to implement reforms. She feels that the EU must take this into consideration and reward Turkey for its efforts.

Necati Lyikan, EU expert at the Akdeniz University in Antalya, is convinced that harping on about human rights abuses and democratic deficits ring hollow when Member States of the EU in Eastern Europe are not making any progress in these areas.

She says: "People in Turkey have the impression that the EU is applying one rule to some, and another rule to others." This and the fact that 2007 was an election year, she explains, is why Turkey's political leaders steered clear of making any of the reforms required by the EU last year.

According to Prime Minister Erdogan, however, 2008 will be the "year of reforms". But progress is sluggish. The pledged amendment to the controversial paragraph 301 on "Turkishness", for example, does not go far enough for the EU.

The European Parliament report points out that what has been done so far is really only the very first step and that Turkey has not made "any progress whatsoever" in terms of moving towards full freedom of speech.

"Turkey must return to the path of reform" says German MEP Cem Özdemir. He considers 2007 to have been "a wasted year" because of the presidential and parliamentary elections. He says: "Ankara now has to put the Turkish train back on the European track. In this case, the journey is just as important as the destination."

EU Positions on Turkey's Membership
Negotiations in the Freezer
Views on Turkey's EU membership bid are still widely divergent in many European countries and in all political parties. Daniela Schröder summarizes the various European positions

END_OF_DOCUMENT_TOKEN_TO_BE_REPLACED
Social media
and networks
Subscribe to our
newsletter