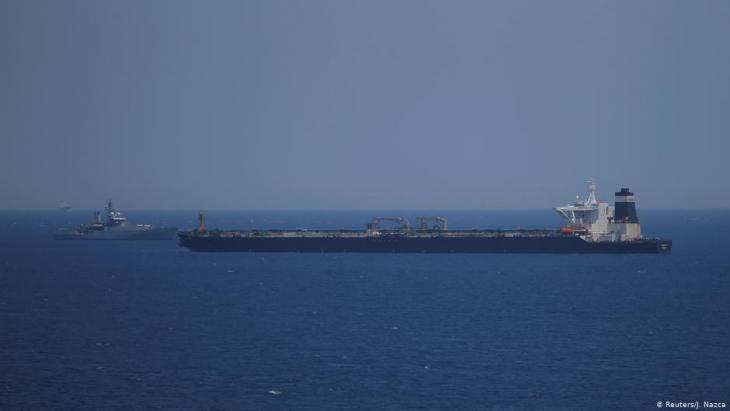 The UK has stopped an Iranian tanker in Gibraltar. Italy and France are supporting opposing parties at war in Libya. Germany has other priorities. Europe is doing almost exactly what it did 100 years ago. An essay by Stefan Buchen

It all seemed to be long past. What happened back then has repercussions for the present, certainly. But those developments were history.

In 2011, the British journalist and historian James Barr published his book "A Line in the Sand". As the reviewer in the London Times so aptly put it, the book tells "the whole shabby story" of the heated competition between France and Britain during the first half of the twentieth century for hegemony in the Middle East, the vast area between the Mediterranean and the West Persian highlands, reaching from the sources of the Euphrates and Tigris to the oases of the Arabian Peninsula.

Barr's book is one of the best and most noteworthy accounts of European colonial history in the Arab-Islamic region. And the story it tells takes one's breath away. Yet the book is virtually unknown in Germany.

It outlines the colonial policies of two European nations that are as self-assured as they are self-satisfied, both regarding themselves as leading world powers. The reader soon realises that the history of the Arab mandates and of Zionism must also be interpreted as a function of the wrangling between France and Britain.

What's most astounding, though, is the accumulation of the most absurd concurrences. While hundreds of thousands of British and French troops were fighting side by side against the Germans and losing their lives in gruelling trench warfare in the First World War, their countries were simultaneously locked in a power struggle in Syria and Palestine, trying to undermine each other using the most devious of means in order to expand their own sphere of influence at the expense of the other.

The "line in the sand" 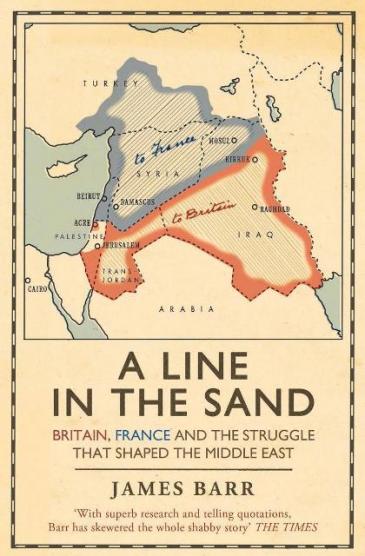 According to Stefan Buchen, "A Line in the Sand" by British journalist and historian James Barr, is "one of the best and most noteworthy accounts of European colonial history in the Arab-Islamic region. And the story it tells takes one's breath away"

Their preferred method for getting the upper hand was to forge temporary, geographically limited alliances with local stakeholders. The adventures of the British spy Lawrence of Arabia, who schemed not only against Germany and the Ottoman Empire but also against France, are only the best known of many such episodes.

The "line in the sand" refers to the secret agreement between Sir Mark Sykes and François Georges-Picot, each representing their respective empire in 1916.

With their treaty, they carved up the Middle East between them, with the area north of the line going to France and the territory to the south promised to Britain. But that didn't settle things for good.

With great persistence, each nation kept secretly trying to better its standing at the expense of the other, just as they were forming a united front against Germany back in Europe.

Druze rebels who rose up against their new French rulers in Damascus in the early 1920s were able to conveniently retreat to the British mandate in Transjordan, where they stocked up on weapons.

Similarly, Palestinian insurgents rebelling against the British could temporarily withdraw to French-controlled Lebanon and arm themselves there.

In the Second World War, the British and French, with American support, paid a high price in human lives to liberate France from German occupation and force Nazi Germany to capitulate from the West.

But all the while, Free French forces under General de Gaulle were training members of the most radical Zionist groups in terrorist methods to use against the British.

James Barr provides evidence in his book that Jewish assassins who carried out deadly attacks on British officials in the Orient had been trained by the French secret service.

A similar story could be told of Italian-British-French rivalries on the Horn of Africa and along the coasts of the Red Sea.

It is no secret that European colonial history continues to have repercussions to this day. The Orient is today divided, not to say riven, by bitter, internecine conflicts. The Israeli-Palestinian conflict is not the only one, but perhaps the most embittered and sustained.

In view of all the dire after-effects, one might have thought that the methods applied in the days of European colonialism and the resulting patterns were a thing of the past. But that would be mistaken. These methods and patterns are now seeing a resurgence, awakening in new and grotesque spasms. We don't even dare hope that these will be the last.

In Libya, the former colonial power Italy is backing the government of Prime Minister Fayez al-Sarraj, which controls most of the capital city, Tripoli, and several surrounding areas. France, on the other hand, has sided instead with the rebel troops under Khalifa Haftar, who formerly had ties to the CIA and is today conducting a campaign from the east to subjugate the oil-rich country by force, with air strikes on the capital.

France and Italy, two founding members of the European Union, which purports to conduct a "common foreign policy", are hence supporting two opposing warring parties right on the continent's doorstep! It is as if the Europeans were vying for colonial influence and world power once again. The only difference is that Italy is now a nearly bankrupt state that is gradually being bought up by China, while not much remains of France's role as a world leader. To get an idea of the current state of affairs in Europe, one has only to consider these new concurrent developments. 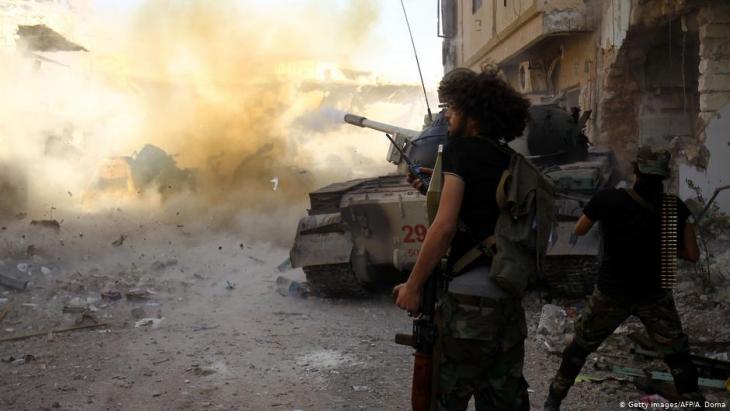 "As if the Europeans were vying for colonial influence and world power once again": In Libya, Italy is backing the government of Prime Minister Fayez al-Sarraj, while France has sided with the rebel troops under Khalifa Haftar

Britain, as the prominent historian Ian Kershaw has observed, has not yet quite completed its descent from its erstwhile rank as a world empire. This descent did not end when its major colonies gained their independence 70 years ago. As Brexit shows, the bottom has not yet been reached.

But Britain still rules over Gibraltar, the rock situated at the strategic strait between Europe and North Africa, known as "Jabal Tariq" in Arabic. And the country is currently proving that Gibraltar is by no means just a bizarre tourist attraction for holidaymakers in Spain who want to watch British soldiers dressed too warmly at their drills, but rather a trump card that they intend to play ruthlessly in the current geopolitical game.

An Iranian oil tanker coming from the Atlantic Ocean and trying to cross the Strait of Gibraltar to allegedly continue on to Syria was stopped by the British Navy. The British arrested the ship's captain and first officer. London accuses them of violating the sanctions against Iran and Syria. Meanwhile, the German Foreign Minister has stressed the importance of adhering to the nuclear agreement with Iran, and both France and Germany are warning of the economic collapse of the country, which has been suffering under "the toughest sanctions in history".

"Bizarre" is probably the best word to describe Britain's "pouncing" on the Iranian tanker at Gibraltar. The historical echoes are only too clear. And Iranian propaganda is of course gleefully pointing them out: the British grab for Persia, the opium wars, the "Anglo Iranian Oil Company" in Abadan in south-western Iran, and naturally Operation Ajax, i.e., the British- and American-engineered overthrow in 1953 of Iranian Prime Minister Mohammad Mosaddegh, who wanted to nationalise the "Oil Company" in Abadan, and so on and so forth.

What is the meaning of this relapse into patterns once thought long past? Late-colonial convulsions have been felt time and again. One need only think of the Suez War in 1956. But in 2019?

In light of past experience, we can be permitted to doubt whether the grabs, jumps and operations by the European states will actually achieve their intended goals. But that doesn't mean they won't still have consequences. The consequences will just be different than the ones intended.

A psychoanalyst would probably get a feeling of unease looking at present-day Europe. It is disintegrating on the inside. Some want to leave the EU, others are pleading for a new authoritarianism. The member states are finding it impossible to reach any agreement, whether on factual or personnel issues. No one wants to take in refugees anymore. In the midst of the crisis, the fallen imperial powers are back to playing their old colonial games. It feels like a grotesque revolt before the final fall into ultimate meaninglessness.

Research project "The Global Qur'an", brainchild of Professor of Islamic Studies Johanna Pink and sponsored by the European Research Council, analyses the history and ... END_OF_DOCUMENT_TOKEN_TO_BE_REPLACED

As the Western world emerges from a holiday season made less festive by COVID-19, millions of children in Afghanistan are starting 2022 facing the prospect of famine, illness, and ... END_OF_DOCUMENT_TOKEN_TO_BE_REPLACED

A wedding extravaganza of bright colours, flowers, feasting and dancing, yet the bride, Nefie Eminkova, who comes from Bulgaria's Pomak – Muslim – minority, can see none of it. ... END_OF_DOCUMENT_TOKEN_TO_BE_REPLACED

Every year in December, the team at Qantara.de takes a look back at the articles that proved most popular with our readers. This year is no different. Here is a run-down of the ... END_OF_DOCUMENT_TOKEN_TO_BE_REPLACED

Jesus – Issa in Arabic – doesn’t merely enjoy the highest place among the prophets in the Koran. He is also revered in Islam’s mystical tradition for his message of love and mercy ... END_OF_DOCUMENT_TOKEN_TO_BE_REPLACED

The military in Sudan has never waged war against a neighbour, but it has already staged 17 coups. Tens of thousands of people are risking their lives to oust the military by ... END_OF_DOCUMENT_TOKEN_TO_BE_REPLACED
Author:
Stefan Buchen
Date:
Mail:
Send via mail

END_OF_DOCUMENT_TOKEN_TO_BE_REPLACED
Social media
and networks
Subscribe to our
newsletter