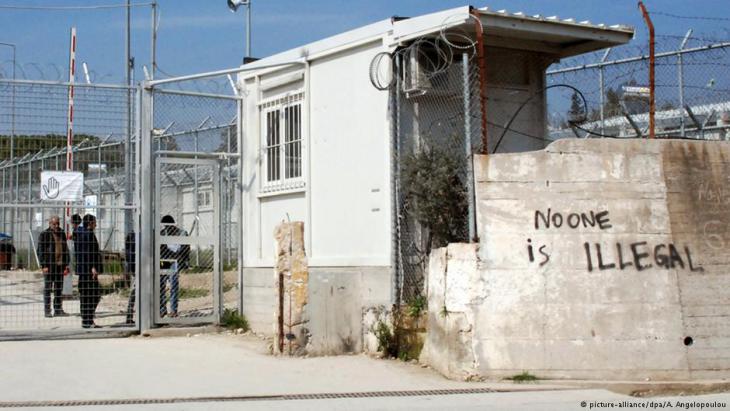 The end of the road

Anything is better than waiting. Even deportation back to Turkey is no longer such a frightening prospect for refugees stranded on Lesbos. But now, Ankara says it is no longer willing to take back rejected asylum seekers. Ulrich von Schwerin reports from Lesbos

On the northern tip of Lesbos, the wind drives the sea up onto the beach. Sometimes the waves reach as far as the road, there are heavy rainclouds over the mountains – in the distance the Turkish coastline, a blur in the mist.

The beach is deserted, tidy, there are no reminders of the dramatic scenes that occurred here at the height of the refugee crisis in October 2015, when an average of 5,000 refugees a day arrived on the Greek Aegean island. Barely any refugees reach the island now.

A year ago, on 18 March 2016, the refugee deal between Turkey and the EU came into force. Timed to coincide with the anniversary, Ankara recently announced it will no longer take back any refugees. Turkish Foreign Minister Mevlut Cavusoglu revealed this policy U-turn in an interview with the television broadcaster "24 TV".

The news does not yet appear to have had any effect on daily life in Lesbos. In the alleyways of the small fishing village of Molivos, little more than 10 kilometres away from the Turkish coastline, there are no traces of any refugees. A Greek coastguard boat is moored on the quay wall. Alongside the port, a tattered inflatable boat lies on the rocks, there are a few lifejackets floating in the water, as well as an outboard motor.

"Since the refugee deal, the routes have shifted, many are again choosing the more dangerous route via Libya," says Achilleas Tzemos from Doctors Without Borders (MSF) speaking in a cafe at the port of Mytilini, the capital of the island. His organisation, which runs a clinic for refugees close by, protested vehemently against the agreement with Turkey. In its view, more stringent controls never stop refugees, but rather force them to choose more risky routes.

But whatever one's view of the EU refugee deal with Turkey, it has undoubtedly led to a stark decline in the number of new arrivals on the Greek Aegean islands. Even if Turkey is no longer taking back those who have had their asylum applications refused – Ankara is still making sure that few boats manage to make it as far as Greece. Living conditions on the islands also play their part in deterring the refugees.

The time when refugees could catch the next ferry to Athens from Lesbos, to travel on from there via the Balkan route to northern and central Europe, has long passed. Since the refugee agreement they have been stranded on the islands, waiting for the Greek authorities to issue a decision on their asylum applications. If they are granted asylum, then they are allowed to travel to the Greek mainland (but not to continue to Germany or another EU country of their choice). According to the terms of the deal, those refused were sent back to Turkey.

Because the asylum application process lasts many months, only a few hundred refugees have been returned to Turkey since the agreement was signed a year ago. In the meantime, they are trapped on Lesbos, where most have to live in the central reception camp at Moria, not far from the island capital of Mytilini. The camp is situated in an idyllic valley among olive groves, but it looks less like a home for refugees and more like a penal colony.

The camp is encircled by four rings of fences crowned by barbed wire. There are strict controls at the entrance, there's a watchtower at each corner and police in combat gear lean against a bus with barred windows in front of the camp. Journalists are not allowed into the camp, but a few improvised cafes have been set up by the entrance, where for a short while at least, refugees can escape the monotony of their tents and containers and drink tea under a tarpaulin.

Mohammed sits here with a friend and plays on his mobile phone. The young Syrian Kurd fled from Afrin in north-eastern Syria in 2013, worked for four years in the textile sector in Istanbul before deciding to attempt the journey via Greece to Germany, where several of his relatives live. But he's been stuck in Moria for five months. Even the news that in 10 days he'll be deported back to Turkey no longer bothers him. Anything is better than all this waiting around, he says.

"The uncertainty is driving people mad," says Tzemos from Doctors Without Borders. "Not knowing how much longer they'll have to wait and what's going to happen to them is very stressful." The asylum cases take a long time to process. Some have been waiting in Moria for eight months for a decision and still don't know what's going to happen. Many refugees don't understand the legal procedures, feel helpless in their dealings with authorities and are also not aware of their rights.

In a bid to at least give the refugees an initial legal consultation, Cord Brugmann set up the project "European Lawyers in Lesbos" (ELIL) last year. The Director of the German Bar Association was himself a volunteer helper on Lesbos at the height of the refugee crisis and thereafter sought a way of deploying his skills as a lawyer. The project brings in lawyers from all over Europe to advise the refugees and make sure they know their rights. The lawyers provide their services on a voluntary basis.

"The initial consultation is essential, because at the start of the asylum application process many points are established that can no longer be revised later," says Brugmann in a conversation at the project office on the harbour of Mytilini. Many refugees are unaware of the key details of the asylum process. Moreover the lawyers remain unable to do anything about either the long waiting times or the more fundamental problem, that is, that the refugees must apply for asylum in a country where the majority do not even want to live.

Home
Print
Newsletter
More on this topic
Deportations to Afghanistan: No safe country of originAn Iraqi artist on Nauru: ″My art is my saviour″Birthing a literature of refuge: A question of mutual interest
Related Topics
European Union (EU), Humanitarian aid, Immigration, Migration, Policy on refugees and migration, Refugees, Turkey and the EU
All Topics

The European Court of Justice has given its backing to companies that don't allow female Muslim staff members to wear headscarves – as long as they don't permit the wearing of ... END_OF_DOCUMENT_TOKEN_TO_BE_REPLACED

The disappearance of Razan Zeitouneh and her colleagues has been one of the greatest mysteries of the Syrian war – until today. DW's investigative unit hunted clues across six ... END_OF_DOCUMENT_TOKEN_TO_BE_REPLACED

Muslims in Europe regularly experience threats, witness attacks and are the target of hate across national borders. Now the Council of Europe, the continent's leading human rights ... END_OF_DOCUMENT_TOKEN_TO_BE_REPLACED

The West is pulling out of Afghanistan after 20 years, but the conflict remains – and the Taliban are stronger than they have been for a long time. And now? The renowned Taliban ... END_OF_DOCUMENT_TOKEN_TO_BE_REPLACED

United States and NATO troops are leaving Afghanistan after 20 years, despite the fact that the Taliban is still advancing. The German Bundeswehr is already out. Sandra Petersmann ... END_OF_DOCUMENT_TOKEN_TO_BE_REPLACED
Author:
Ulrich von Schwerin
Date:
Mail:
Send via mail

END_OF_DOCUMENT_TOKEN_TO_BE_REPLACED
Social media
and networks
Subscribe to our
newsletter