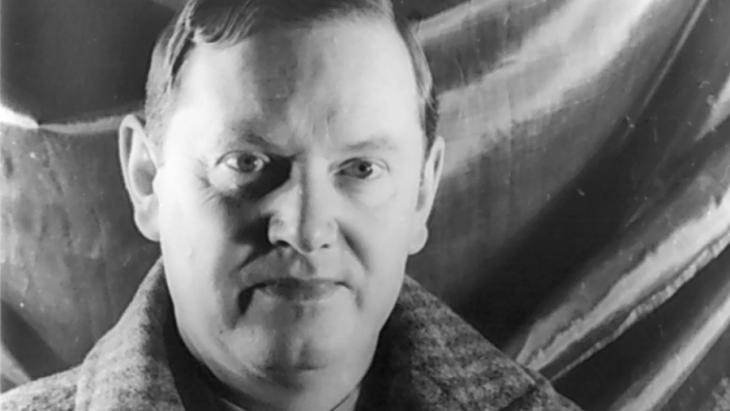 Evelyn Waugh, the English writer most would associate with his best-selling novel ″Brideshead Revisited″, died fifty years ago this month. Yet Waugh was also a passionate traveller and observer of foreign cultures. In this early work, he transports the reader back to early twentieth century Egypt. Sherif Abdel Samad read the book

In 1929 the English satirist Evelyn Waugh travelled to the countries bordering the Mediterranean to write a travelogue. The result was ″Labels: A Mediterranean Journal″ (1930), a book that is frequently overlooked when assessing Waugh′s literary legacy. Yet almost a hundred years after its publication, ″Labels″ still offers a fresh testimony of a world unknown to readers except from the writings of Naguib Mahfouz.

Without indulging in lengthy and descriptive passages, Waugh narrates his impressions of the many cities he visited – Haifa, Crete, Port Said and Cairo – in a fresh light tone. Notorious for his wit and politically incorrect statements, he neither shies away from mocking fellow travellers nor from making racist remarks about the locals.

Written in the first person, Waugh accompanies a fictitious newly-wed couple he encounters on board ship to Egypt; Geoffrey and his wife Juliet, who falls ill before arriving in Port Said. In reality, it was Waugh′s own young wife Evelyn Gardener, niece of the Earl of Carnarvon (of Tutankhamun fame), who – bedridden with a high temperature – caused Waugh to prolong their stay in Egypt.

Although Waugh confided to his writer friend Harold Acton that Port Said is ″an intolerably dull town″, his travel impressions suggest otherwise. Waugh took immense pleasure in depicting the hotels and bars of Port Said, staffed by Sudanese and Berber servants, frequented by English commercial agents and partying Egyptian officials; listing venues where the food was great and the drinks pure, ridiculing Europeans turning up on Saturday evenings for dance festivities, all the while observing that those in British service ranked higher than any Egyptian. The expatriate English community lived an extremely secluded existence, indulging in amateur theatricals and dinner parties. It is hardly surprising, therefore, that Waugh′s endeavours to delve into Egyptian street and night-life met with baffled incredulity. 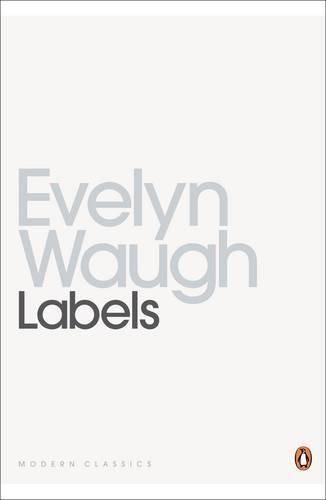 A lively mix of keen observation and throwaway comment: Waugh′s anthropological accounts are interlaced with funny occurrences and bizarre encounters, such as the one involving a random dragoman who accompanied him to a mosque, then sold him hashish – for thirty piastres – that turned out to be amber cigarettes

″Arab Town, at any hour of the day or night, was a fascinating place to us, and it was astonishing to discover how ignorant the English colony were about it, and how uninterested. Many of them had never been there at all…; I was one of those writing johnnies, so of course I had to nose round a bit collecting local colour; jolly interesting too for a chap who was interested in that sort of thing; they would read about it all in my book when that came out.″

Prior to his arrival, Waugh claimed, Port Said was an unsafe haven, notorious for murder and crime. Only since the war had it become a respectable city. From his account, Waugh wandered the streets freely and the only harassment he experienced was from beggars and vendors.

″One cannot sit down for a moment at any café without being beset by tiny Arab urchins, mostly with moist ophthalmic eyes and nasty skin diseases, who attempt to clean your shoes, ″ he wrote. ″The experienced resident then kicks them as hard as he can, and they put out their tongues and go on to the next table.″ Shoe-polishing, he ironically concluded, was a required training for street hassle, as the ″elder pests″ peddled everything that can be sold from European newspapers, amber and ivory cigarette holders to lewd postcards.

Europeans who according to Waugh had a ″superstitious respect for Oriental soothsayers″ found the fortune tellers especially appealing. Waugh′s anthropological accounts are interlaced with funny occurrences and bizarre encounters, such as the one involving a random dragoman who accompanied him to a mosque, then sold him hashish – for thirty piastres – that turned out to be amber cigarettes.

While some observations still ring comically true today, such as ″Every European is assumed to be a spy until it is proved to the contrary″, others are quite random, like the description of the joyous Bajiram festivities that follow Ramadan: children parading the streets with their new clothes, the lively streets illuminated and decorated with white flags. Waugh narrates a visit to the circus in great detail and dedicates several passages to the smuggling of hashish.

For the sake of his readers and due to his own quest for adventure, he also braves the ″red-light district″, thereby discovering the brothels at the end of the town on the shores of Lake Menzaleh. He is simultaneously appalled and fascinated by the licensed ″ugly″ prostitutes, sitting at the open doors of one-room huts sewing and plying their wares. Many had the price written on the door, which was usually less than 25 piastres.

Although Waugh intended to set a novel in Port Said, the project unfortunately never materialised. And after an entire month, he continued his journey with his convalescent wife to Cairo.

Dissatisfied with Egypt′s hotels, Waugh decided to stay at Mena House, which did not live up to his expectations either. As in Port Said, Waugh describes comic and often brutal episodes about how he was forced to defend his luggage with umbrellas and sticks from half a dozen porters, all too eager for baksheesh.

He was particularly impressed by the dragomen who ″infest the tourist quarter of Cairo″, as they all spoke at least one European language and possessed an extensive knowledge of antiquities. He met an Egyptian engineer by chance who gave him a tour and who was extremely concerned that Waugh should not find Cairo too dirty, being at pains to emphasise that Egyptian women are not ugly. As in Port Said, Waugh is led to a brothel where a young girl with dark skin offers to dance for him. 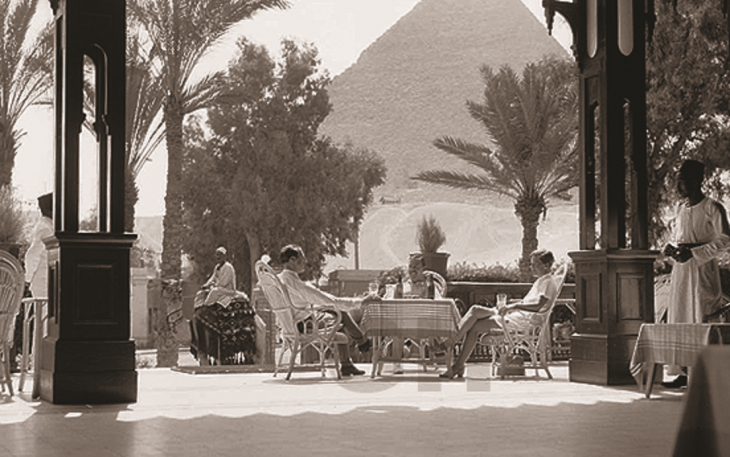 Hard to please: "dissatisfied with Egypt′s hotels, Waugh decided to stay at Mena House, which did not live up to his expectations either. As in Port Said, Waugh describes comic and often brutal episodes about how he was forced to defend his luggage with umbrellas and sticks from half a dozen porters, all too eager for baksheesh," writes Samad

In Cairo, Waugh completed the full tourist programme; he rode in an open carriage, bought scent at the bazaar in the Mouski and visited the Pyramids of Gizeh and the Sphinx. He was left rather disappointed by the latter, as they turned out to be much less impressive up close than when seen from a distance.He includes several rants about Egyptians whom, he claims, are appalling drivers and calls them an ″invading race″, neglectful and destructive of their own history. Indeed, they have yet to produce a first-rate Egyptologist, he points out, leaving it for the French and English to excavate their treasures.

Waugh also displays a racist colonialist approach towards Muslims. ″Living as we are under the collective inferiority complex of the whole West, and humbled as we are by the many excellencies of Chinese, Indians, and even savages, we can still hold our heads in the Mohammedan world with the certainty of superiority. It seems to me that there is no single aspect of Mohammedan art, history, scholarship, or social, religious, or political organisation, to which we, as Christians, cannot look with unshaken pride of race.″

Waugh was undoubtedly a product of his time, raised in a colonial atmosphere of racial and religious superiority. The impressions he gathers in his book fit the Orientalist mindset, without offering any deeper insights and yet, for all its shortcomings, ″Labels″ remains a fascinating read, presenting the vibrant intensity of Egyptian street life.

Home
Print
Newsletter
More on this topic
Agatha Christie and the Orient: When murder came to Mesopotamia An elegant pilgrimage: Baron Heinrich von Maltzan in MeccaPierre Loti: Dreams of the Orient
Related Topics
Arabic literature, Literature, Travel, Travels in the Orient
All Topics

Alaa Abd el-Fattah, arguably Egypt’s most prominent democracy activist, has just been handed another lengthy prison sentence. Despite this, a book of his writing has recently been ... END_OF_DOCUMENT_TOKEN_TO_BE_REPLACED

A prominent rights group in Egypt, the Arabic Network for Human Rights, is ending operations just as the country braces for a controversial NGO law. Is this the beginning of the ... END_OF_DOCUMENT_TOKEN_TO_BE_REPLACED

Moncef Marzouki was Tunisia's first democratically elected president after the fall of dictator Ben Ali. Today he is the most prominent critic of increasingly counter- ... END_OF_DOCUMENT_TOKEN_TO_BE_REPLACED

Asef Bayat, professor of Sociology at the University of Illinois, Urbana-Champaign, has been studying revolutions and how they affect people since 1979. In his recent book, " ... END_OF_DOCUMENT_TOKEN_TO_BE_REPLACED

Every year in December, the team at Qantara.de takes a look back at the articles that proved most popular with our readers. This year is no different. Here is a run-down of the ... END_OF_DOCUMENT_TOKEN_TO_BE_REPLACED

In this new bilingual edition, translated by Humphrey Davies, al-Jawbari, one of the thirteenth century's leading experts in skullduggery reveals all there is to know about the ... END_OF_DOCUMENT_TOKEN_TO_BE_REPLACED
Author:
Sherif Abdel Samad
Date:
Mail:
Send via mail

END_OF_DOCUMENT_TOKEN_TO_BE_REPLACED
Social media
and networks
Subscribe to our
newsletter