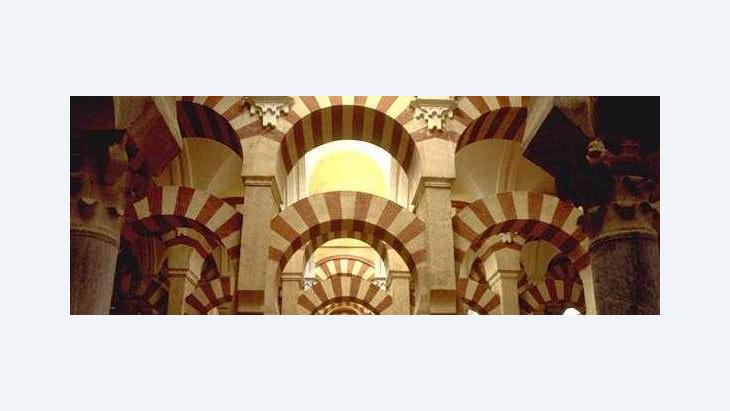 ﻿As a presenter for MTV, Kristiane Backer was an icon of popular culture. In her book Islam as a Way of the Heart she goes to the heart of her religion to demonstrate that a tolerant, open Islam grounded in the Koran and Islamic source materials does indeed exist. Lewis Gropp has this review

When people talk about Islam, it is usually in the context of a discussion about integration policy or combating terrorism. And although Islam is one of main topics in the media these days, it is far too seldom that the religion itself is the subject of discussion. This is a serious drawback. If the public were to hear more about Islam as a religion, rather than as an ideology supposedly inimical to democracy, it would finally come to realize that Islam really is a religion like any other.

This book, written by the convert Kristiane Backer, may help to bring about this realization. Islam as a Way of the Heart is not simply a convert's unreflective prose; it is a conscientious and critical examination of the numerous different traditions and currents of Islam. The author's spiritual path does not end in her submission to orthodox religious dogmas. On the contrary: "For anyone who is looking for answers to the big, essential questions […] and seeking a spiritual practice that is easily accessible, Islam is a wonderful path," writes the author. "It is not, however, the only one." 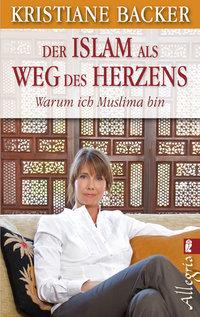 "A lively and sincere attempt to come to terms with the contradictions of faith and life": Kristiane Backer's Islam als Weg des Herzens

​​In her book Backer refers twice to the metaphor according to which religions are no more than ladles with which mankind dips into and draws from the fountain of divine experience. In this context the author also quotes Sura 5:48 of the Koran: "To each among you have we prescribed a law and an open way. If God had so willed, He would have made you a single people; but He thus puts you to the test through the revelations He has given each of you. You shall compete with one another in righteousness."

Kristiane Backer does not simply insist that hers is a religion of peace, in the manner of for instance Islamic officials in Germany pressurized by the high-profile debate. She always supports her remarks with quotations from the Muslim holy book and other Islamic sources. Furthermore, she allows numerous internationally recognized Islamic scholars to have their say, and conscientiously and convincingly presents their readings of Islam as a tolerant and humane religion.

Among others she introduces the reader to the English scholar of Islam Martin Lings, the Grand Mufti of Bosnia-Herzegovina, Mustafa Ceric, and the Kuwaiti-American theologian Khaled Abu Fadl, as well as to Islamic feminists such as Asma Barlas, Leila Ahmed or Amina Wadud.

In the book Backer discusses the interpretation of the word jihad with the British Islamic scholar Gai Eaton (who died last year). In the Western media the term is often understood to mean a call to war against unbelievers. However, reference to the Islamic sources produces a quite different meaning. According to Eaton, Backer writes, "The great jihad is […] the lifelong work on oneself: the endeavour to meet religious obligations, to strengthen and improve one's character. Sincerity, humanity and moral courage are the values that reward the great jihad." 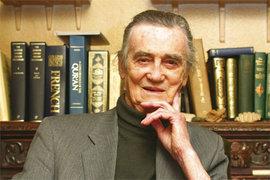 "Sincerity, humanity and moral courage are the values that reward the great jihad." - The late British Muslim scholar Gai Eaton

​​Even Salman Rushdie, one of the most prominent victims of Islamist aggression and a man with a profound knowledge of Islam, has declared that the Koran certainly does not glorify violence any more than the Bible does. In this context Backer quotes the Muslim holy book and proves that the Koran can indeed be interpreted as a message of peace. "It says […] expressly, 'God does not love those who exceed the limits' (Koran, 2:190). Terrorism is based on hatred and revenge, and the Koran warns us against precisely this: 'Do not let your hatred of any people prevent you from being just' (Koran, 5:8)."

A topic that is dealt with in several places in her book is the requiting of evil deeds with good deeds. Here too Backer refers to the Koran, quoting Sura 41:34: "The good deed and the evil deed are not equal. Repel the evil that is done to you with a better deed! Then the one between whom and yourself there was enmity will become a friend." 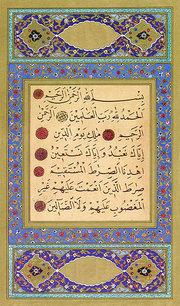 "State of transition": Backer proves that the Koran can indeed be interpreted as a message of peace, writes Gropp

​​Kristiane Backer also makes a critical examination of her religion from her point of view as a woman. She is certainly not prepared to relinquish the right to determine her own life. She is shocked when one of her acquaintances takes for granted that the role of the woman is subordinate to the man's; these are role models she is not prepared to accept. So Backer meets the Islamic feminist Halima Krausen, who was born in Hamburg and now lives and teaches in London, to discuss with her the frequently quoted passages in the Koran that supposedly sanction the man's right to physically chastise his wife.

According to Krausen this is a misinterpretation, because at the time of the emergence of the Koran, and in that context, the meaning of the key word in this sura was in fact "admonish". Furthermore, in the same sura the Koran also calls upon women to "admonish" their husbands in the same way. Krausen also comments that, in Islam, violent behaviour is grounds for divorce.

Halima Krausen is not alone in her views. Over the past ten years many significant reformist impulses in Islam have originated in the sphere of ‘Islamic feminism', particularly in Indonesia, Malaysia, Morocco, Britain and the United States.

An international panorama of Islamic life

As well as being an introduction to the contemporary hermeneutics of Islam, Islam as a Way of the Heart is also an autobiography. Backer describes how she went from working at a small radio station in Hamburg to the music channel MTV in London; she describes her celebrity lifestyle, mixing with stars of the music industry; the intoxicatingly glamorous summer party at Mick Jagger's London residence; her visits to Pakistan, and her admiration for the cheerful, everyday piety of ordinary people which (amid the religious fanaticism) also exists there.

Backer describes how she would discuss the poetry of the Islamic mystic Rumi with friends in the hippie quarter of San Francisco; she depicts sessions with a bizarre group of Sufis in London, her meeting with a successful Saudi Arabian businesswoman, the peculiarities of European Islam in Bosnia-Herzegovina – and, finally, the exertions of her pilgrimage to Mecca. Backer also describes the painful breakdown of her marriage to the Moroccan television journalist Rachid Jaafar, concluding that the cultural differences between them were part of the reason why it proved impossible for them to build a life together.

"An antidote to the overheated debate about Islam": Kristiane Backer's book is a conscientious and critical examination of the numerous different traditions and currents of Islam

​​This book, then, is not simply unreflecting feelgood PR written by a carefree convert who claims to have found salvation in the unworldly realms of spirituality. Instead, it is a lively and sincere attempt to come to terms with the contradictions of faith and life. The mere fact that Backer shows that there are many different variants of Islam counters the widespread prejudice that the avowed goal of this religion is to undermine the liberal Western constitutional order. In this sense the book is effectively an antidote to the overheated debate about Islam.

One should not, of course, make the mistake of minimizing the dangers of radical and militant Islam. Along with far-right populist ideology, which finds sympathizers at all levels of society, militant Islam is one of the greatest challenges to liberal democracy in Europe. It too claims the Koran and the Islamic traditions as its foundation. Islamism, an ideology that interprets the religion politically and rejects liberal democracy, also adopts a position that is incompatible with liberal Western democracies.

However, A Way of the Heart demonstrates that Islam is currently in a state of transition. Changes are brewing as a result of different interpretations of Islam competing with one another. If the West fails to clear a path for the tolerant interpretation that Backer presents so convincingly, there will be no successful integration of Muslims in this country. For this reason, the lessons contained in Backer's book provide a great opportunity for the future of democracy in the West.

Home
Print
Newsletter
More on this topic
Kristiane Backer on Ramadan
Related Topics
Dialogue of Religions, Freedom of religion, Islam and the West, Islam in Europe, Islam in Germany, Koran | Quran, Muslims in the West, Sharia
All Topics

Research project "The Global Qur'an", brainchild of Professor of Islamic Studies Johanna Pink and sponsored by the European Research Council, analyses the history and ... END_OF_DOCUMENT_TOKEN_TO_BE_REPLACED

As the Western world emerges from a holiday season made less festive by COVID-19, millions of children in Afghanistan are starting 2022 facing the prospect of famine, illness, and ... END_OF_DOCUMENT_TOKEN_TO_BE_REPLACED

A wedding extravaganza of bright colours, flowers, feasting and dancing, yet the bride, Nefie Eminkova, who comes from Bulgaria's Pomak – Muslim – minority, can see none of it. ... END_OF_DOCUMENT_TOKEN_TO_BE_REPLACED

Every year in December, the team at Qantara.de takes a look back at the articles that proved most popular with our readers. This year is no different. Here is a run-down of the ... END_OF_DOCUMENT_TOKEN_TO_BE_REPLACED

Jesus – Issa in Arabic – doesn’t merely enjoy the highest place among the prophets in the Koran. He is also revered in Islam’s mystical tradition for his message of love and mercy ... END_OF_DOCUMENT_TOKEN_TO_BE_REPLACED

The military in Sudan has never waged war against a neighbour, but it has already staged 17 coups. Tens of thousands of people are risking their lives to oust the military by ... END_OF_DOCUMENT_TOKEN_TO_BE_REPLACED
Author:
Kristiane Backer
Date:
Mail:
Send via mail

END_OF_DOCUMENT_TOKEN_TO_BE_REPLACED
Social media
and networks
Subscribe to our
newsletter