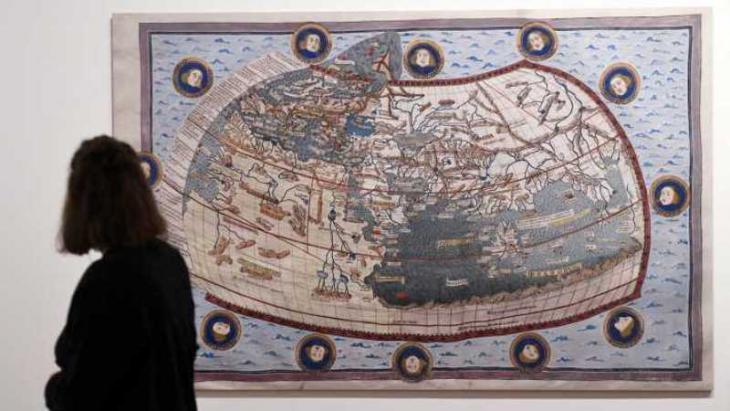 The Berlin exhibition "Jews, Christians and Muslims: Scientific Discourse in the Middle Ages 500–1500" shows the circuitous routes by which knowledge made its way around the medieval world while dismantling the theory of a Judeo-Christian Europe. By Gustav Seibt

In recent years there has been more and more talk of the "Judeo-Christian roots" of the "West" (or the "Occident"), in particular when it comes to differentiating Europe from Islam. This is quite hypocritical because it gives the impression that the 2,000-year co-existence of Jews and Christians in Europe has been one long, harmonious period of brotherhood. It also fails to acknowledge that for many centuries, Jews and their communities could breathe much more easily in Arab and Ottoman realms than they could in pre-modern Christendom.

The true circumstances were far more complex and richer. This can best be seen by tracing the history of knowledge. A not untypical episode in this history might go something like this: in the 9th century, texts on ancient medicine by Hippocrates and Galen were translated from Greek into Arabic at the "House of Wisdom", a translation academy in the Abbasid city of Baghdad. From Baghdad, the texts travelled to Muslim Spain, and from there to Christian kingdoms, in particular Toledo.

In Toledo, these Arabic versions of Greek scientific treatises were translated into Latin in the mid-12th century. In many cases, Jews conversant in Arabic had a hand in the translations, creating (often only oral) intermediate versions in the Roman vernacular, which were then translated into Latin, the Western language of science, by clerical scholars. This made these texts accessible to the rest of Europe and meant they could be used for academic tuition in Paris or Cologne. 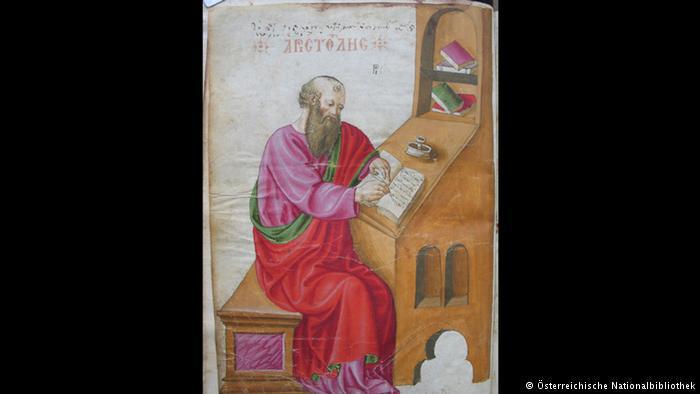 According to Gustav Seibt, translations of the works of "intellectual titans such as Avicenna (Ibn Sina, 980–1037) and Averroes (Ibn Rushd, 1126–1198) were [...] seminal for Western science". Pictured here: Aristotle, whom medieval scholars venerated as the greatest philosopher of them all, in a Roman illustration dating from 1457

A long and circuitous journey

Knowledge transfer thus proceeded in a phenomenal spatial and temporal movement, in a clockwise direction from Mesopotamia via North Africa and Spain to Central Europe, on a journey that might take some four hundred years. Along the way, texts might be translated up to four times and change scripts at least three times.

Naturally, these massive transformations were not restricted solely to medical science. Ancient philosophy, astronomy, mathematics and also their Arab advances were over the course of time also carried from the East and South to the West, by laboriously copying texts, carefully transferring valuable codices and teaching and explaining the contents to generations of learners.

Latinate versions of the writings of intellectual titans such as Avicenna (Ibn Sina, 980–1037) and Averroes (Ibn Rushd, 1126–1198) were thus seminal for Western science. The Moorish philosopher Averroes even made it onto the pages of Dante's "Divine Comedy", where he is simply called "the one who made the great commentary" in reference to his basic work on Aristotle, whom medieval scholars venerated as the greatest philosopher of them all.

Not only were several different languages involved in this history of reception but also the four main classical scripts: Greek, Latin, Hebrew and Arabic. Indeed, this immensely complex story of influences and reception can be told most objectively as a history of manuscripts and copies. The top experts are thus more likely to be found in the manuscript departments of large libraries than in university philosophy departments or in centres devoted to the history of scholarship. 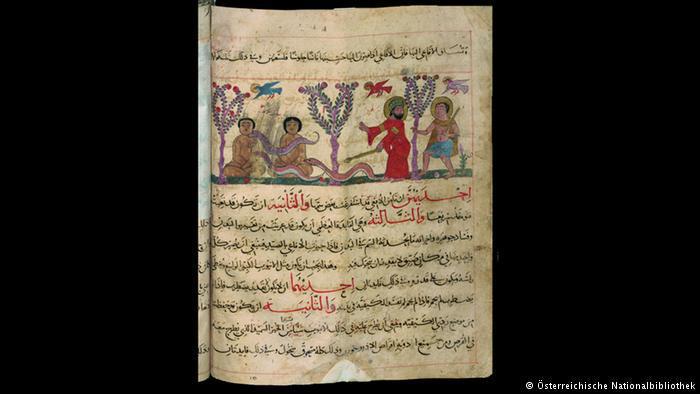 "The illustrations are not only stunning and colourful; they were also meant as helpful aids to understanding," writes Seibt. Pictured here: illustration from an Arabic manuscript from the early 13th century, showing how to distract and catch snakes using stuffed dolls

The lavish exhibition of manuscripts and books from the millennium between 500 and 1500 now running at the Martin-Gropius-Bau in Berlin focuses on the fields of medicine and astronomy (which in the Middle Ages also included astrology). The splendid and incredibly fascinating books and manuscripts come from the Austrian National Library in Vienna, where they were exhibited in a similar thematic compilation a decade ago.

In the meantime, the theme of the exhibition has taken on a political force that could not yet be felt back then. This is because, for anyone with eyes to read and see, it refutes the notion of a strictly demarcated Occident, let alone a Christian West.

Pagan antiquity can be seen to have played a role from the start, indeed it is possibly the most important element of all in the sciences. And there is simply no denying the fact that for centuries, Greek philosophy and science were more at home in the Arab centres of scholarship than in European monasteries or cathedral schools.

Right from the start, the exhibition controverts the theory of a "Judeo-Christian" Europe by presenting the four different writing systems in a series of magnificent manuscripts, but also in textbooks dating from the early days of book printing where the four scripts were printed side by side. Koranic calligraphies can be seen here next to Hebrew Bibles; Byzantine gospels next to Carolingian uncials. 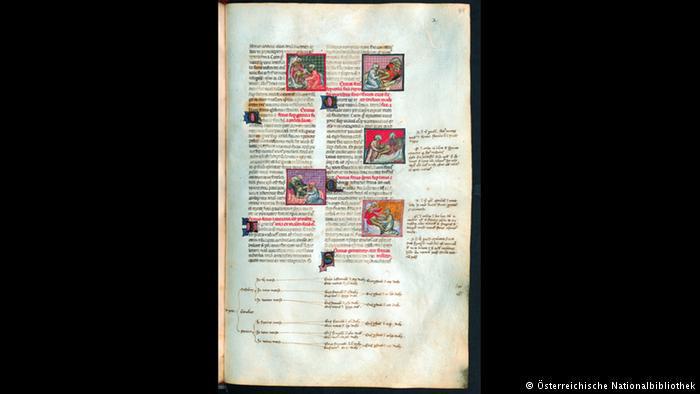 Early guide to obstetrics. The page shown here is taken from a book on obstetrics produced in southern France in the second half of the 14th century

If the exhibition had been confined to philosophy, it would certainly have demonstrated what is still today the intellectually most momentous aspect of the connection between Western and Eastern scripts. However, there would not have been many images to admire. By focusing instead on medicine and astronomy, the exhibition takes visitors on a tour of the great illuminated manuscripts created during this thousand-year-period that directly preceded the invention of the printing press. The illustrations are not only stunning and colourful; they were also meant as helpful aids to understanding.

An Arabic manuscript from the early 13th century, for example, features illustrations showing how to distract and catch snakes using stuffed dolls. A northern Italian codex dating from sometime around 1300 not only provides a Latin translation of the surgical practices of the Andalusian Arab physician Abulcasis (Abu al-Qasim, 936–1013), but also includes illustrations of the instruments required. Books of herbal remedies and panaceas are full of coloured depictions of plants and small animals. Obstetrics compels the scribe to insert drastic gynaecological miniatures amid tiny double columns of flickering Gothic letters.

The texts on astronomy couple colourful illustration with the mathematical precision of astrolabes and the Ptolemaic geocentric concept of the heavens that was accepted doctrine in Europe from late Antiquity all the way up to Copernicus.

The Berlin exhibition includes explanatory wall panels. There is also a catalogue that features in-depth essays on the subjects covered by the exhibition, but no descriptions of the individual objects on display sorted by numbers. This omission demands a great deal of effort on the part of visitors who want more than just to be swept away by the beauty of the manuscripts and images.

Those who would like to delve deeper would do well to listen to Peter Adamson's fabulous podcasts on the history of philosophy, which at the moment offer the most accessible attempt to untangle the intricate historical relationships that are the theme of this exhibition.

Gustav Seibt
© Suddeutsche Zeitung/Qantara.de 2017
Translated from the German by Jennifer Taylor
The exhibition "Jews, Christians and Muslims: Scientific Discourse in the Middle Ages, 500–1500" runs until 4 March 2018 at the Martin-Gropius-Bau in Berlin.

Turkish author and journalist Mustafa Akyol is one of the foremost pioneers of an Islam reconciled with modernity. Musa Bagrac spoke with Akyol for Qantara.de about his new book " ... END_OF_DOCUMENT_TOKEN_TO_BE_REPLACED

A bird's eye view of eight hundred years of history: Brian A. Catlos tells the story of Al-Andalus in the style of a streaming series and deconstructs the myths of the Reconquista ... END_OF_DOCUMENT_TOKEN_TO_BE_REPLACED

Known to Jews, Muslims, and Christians by three different names – Sefarad, al-Andalus, and Hispania, respectively – the Iberian Peninsula has been a centre of fertile intellectual ... END_OF_DOCUMENT_TOKEN_TO_BE_REPLACED

A heated debate is raging in the Islamic world about whether the religious and political spheres in Islam are one and the same. Before this matter can be settled, the terms " ... END_OF_DOCUMENT_TOKEN_TO_BE_REPLACED

On their fourth CD "Irade" (willpower), Masaa has left its piano sound behind, yet continues with its new guitarist to pursue a path that bridges jazz improvisation and Arabic ... END_OF_DOCUMENT_TOKEN_TO_BE_REPLACED

Muhyiddin Ibn Arabi (1165-1240) is one of the most influential Arab philosophers and mystics. James Morris, Professor of Islamic Theology at Boston College, explains why his ... END_OF_DOCUMENT_TOKEN_TO_BE_REPLACED

Comments for this article: Dispelling myths

An objective and important article.The propagation of the Judeo-Christian concept , especially in the US ,is part of the attempts to undermine and isolate any solidarity with or sympathy for the Palestinians.Actually ,many of the downtrodden Palestinians are Christians.This article demonstrates the difference between biased superficial misinformation and well written objective contributions.

END_OF_DOCUMENT_TOKEN_TO_BE_REPLACED
Social media
and networks
Subscribe to our
newsletter