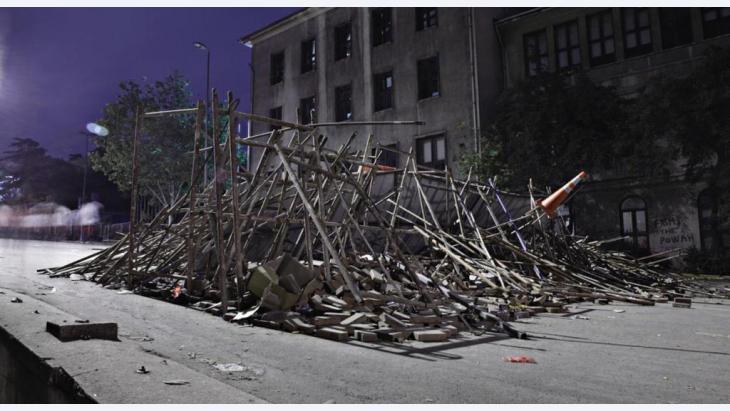 The art of remembering

Protest art from Turkey, covering the period from the 1970s to the present day, is currently on show at the Neue Gesellschaft für bildende Kunst or nGbK (New Society for Visual Arts) in Berlin. But this exhibition is a little bit different in that it does not concern itself only with political resistance in Istanbul, but also with social protest in eastern Turkey. Ceyda Nurtsch took a look at the art on display and talked to the artists and the organisers

CANAN is rather plump. She has shoulder-length hair and a gap between her two front teeth that is revealed when she smiles. On the morning I meet her in the nGbK, she is wearing a light summer dress. In the self-portrait that is hanging just behind her (one of two works she is showing at the exhibition "Political Art and Resistance in Turkey"), she is wearing nothing.

In it, her body is coloured purple and she stands against a paler purple background, heroically holding a flag in the air. "Purple is the colour of feminism," CANAN explains, "and my nakedness stands for independence and freedom." The 46-year-old artist wants her picture to highlight the often dramatic circumstances in which many women in Turkey find themselves.

The Istanbul-based artist describes herself as a feminist activist. The 1970s feminist slogan "the personal is political" sums up her own fundamental approach to art. "I want my art to be provocative, not sensationalist," explains the woman whose work has not only been criticised and censored as pornographic in Turkey, but in some instances in Germany too. "I want my work to make people think, to stimulate discussion." She says that she finds her subject matter in her immediate environment, in her own experiences, and those of people she knows. "I am doing this for myself, for my daughter and for all other women." 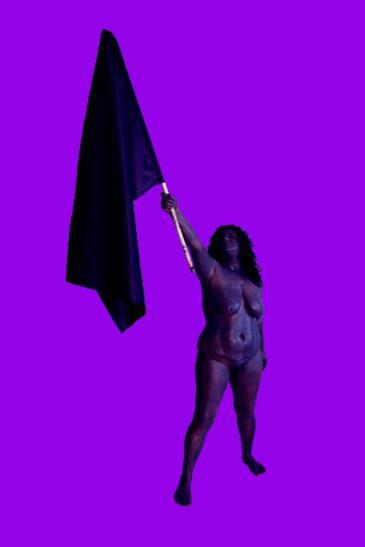 "Purple is the colour of feminism," says 46-year-old artist CANAN, "and my nakedness stands for independence and freedom"

CANAN is one of 20 artists and artists' collectives whose works on the subject of political protest art are currently being exhibited by the nGbK. The exhibition includes works from the period beginning 1 May 1977 – when Labour Day celebrations at Taksim Square in Istanbul were brutally curtailed by police action against trade unionists and demonstrators leaving 30 people dead, many others injured and hundreds arrested – up to the Gezi protests of 2013, the best known example of social resistance to police violence in Turkey.

There are many artistic approaches to the theme of social resistance on display. The "Forced Disappearances" section, for example, displays conceptual works dealing with the tragic phenomenon of those who have "disappeared" as a result of the state. A photographic exhibition features studies of the families whose loved ones have disappeared, for example the so-called Saturday Mothers, the women who carry pictures of their missing sons in a weekly protest against their unexplained disappearances.

Another work on the theme comes from artist Nalan Yirtmac with her graffiti display. Her street art shows sprayed stencil portraits of members of the Armenian opposition, intellectuals and writers, who were abducted from the streets of Istanbul in 1915. Her portraits bring the victims back onto the streets and into public spaces as a way of fighting to keep their memories alive. By doing this, she could be said to be writing them back into the collective memory and at the same time arguing for a rewrite of the official version of history.

For Nalan Yirtmac, the history of the Istanbul Armenians was a natural choice of subject matter. She is appalled by the fact that, even a hundred years after the abduction and murder of Armenians in the Ottoman Empire, the Turkish government is still refusing to acknowledge the genocide. "I don't want my art to be seen as provocative," explains the petite woman with the short hair and soft, clear voice. "I see it as an apology to the victims and a reproach to the government." 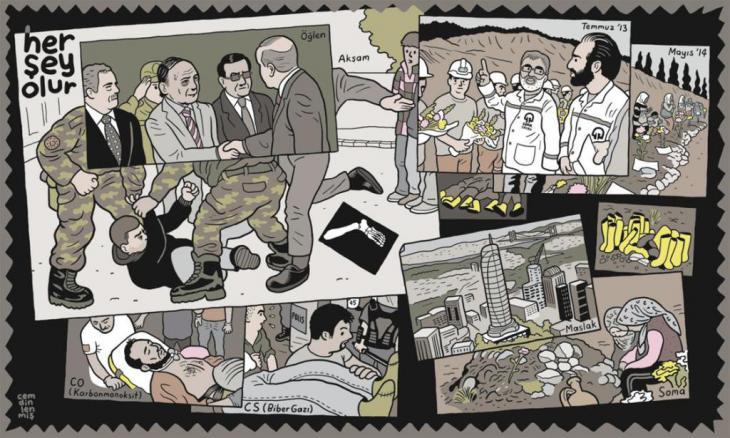 "A comparison of the works reveals how playful and self-ironic the art and self-representation of the Gezi movement is with its many caricatures," writes Ceyda Nurtsch. "By contrast, the Labour Day posters of the DISK trade union from the 1970s appear melodramatic and serious"

One thing the exhibition clearly does is to blur the boundaries between art and documentation. "It is this that creates such an interesting tension," explains Eva Liedtjens, who has been helping supervise the project for the past two years. Works on the theme of "Picture-in-Picture", for example, show photographs of the funeral of the Armenian journalist Hrant Dink, who was shot dead in the street in 2007: the crowd of mourners in the picture also holds aloft pictures of Dink.

A particularly praiseworthy aspect of the exhibition is that it does not limit itself to the already well-known protests in the major city of Istanbul, but also includes the social protests and artistic responses to them in eastern Turkey. An impressive example comes from artist Erkan Ozgen, from the south-eastern city of Mardin, where he was born in 1971. His video installation "Adult Games" shows children in a playground; masked and dressed like guerrilla fighters, they imitate the behaviour of adults, playing out confrontations between activists and police officers.

A comparison of the works reveals how playful and self-ironic the art and self-representation of the Gezi movement is with its many caricatures. By contrast, the Labour Day posters of the DISK trade union from the 1970s appear melodramatic and serious. The independent photographers' collective Nar Photos, which was set up in 2003, has turned them into a collage. There are no artworks from the period around the military coup of 1980, a phenomenon that reminds us of the suppression of oppositional voices and of the self-censorship practised at that time.

A well-researched and informative bilingual catalogue has been put together to accompany this remarkable exhibition. It provides visitors with an expert introduction to the various themes of "Collective Memory", "Art and Resistance" and "Urban Resistance" and provides theoretical background to accompany the exhibits. Discussion sessions on the respective themes have also been organised.

The exhibition "Political Art and Resistance in Turkey" is open to the public at the Neue Gesellschaft für bildende Kunst (nGbK) in Berlin until 30 August 2015.

Home
Print
Newsletter
More on this topic
Introduction to the nGbK exhibition Political Art and Resistance in TurkeyCulture in Turkey before and after Gezi: The end of Cool IstanbulArtists in Turkey: Artists against Erdogan's censorshipTurkish art in Germany: A reading Arab pulls in the crowds
Related Topics
Armenians, Art, Photography, Taksim Square, Turkish opposition, Visual arts, Women in Turkey
All Topics

Germany’s electorate includes some 7.4 million citizens with international roots, while many more millions of residents from abroad aren’t allowed to vote. Both groups are often ... END_OF_DOCUMENT_TOKEN_TO_BE_REPLACED

No other Western poet was arguably so well-versed in the Koran or so fascinated by Islam as Germany's national hero, Goethe. In a new publication that examines all Goethe's ... END_OF_DOCUMENT_TOKEN_TO_BE_REPLACED

Migrants are often maligned as being responsible for Europe's problems. Yet their integration is in Europe's interest. Michael Thaidigsmann believes that a long-term vision is ... END_OF_DOCUMENT_TOKEN_TO_BE_REPLACED

How could the Afghan government and its institutions collapse so quickly? That things were going wrong in Afghanistan had been obvious for a long time, yet the West preferred to ... END_OF_DOCUMENT_TOKEN_TO_BE_REPLACED

Shida Bazyar's new novel is the literary surprise of the year. It tackles the pressing issues of our time, and yet it is timeless. This is a story of friendship, marginalisation ... END_OF_DOCUMENT_TOKEN_TO_BE_REPLACED

The swift fall of Kabul recalls the ignominious fall of Saigon in 1975. Beyond the local consequences – widespread reprisals, harsh repression of women and girls, and massive ... END_OF_DOCUMENT_TOKEN_TO_BE_REPLACED
Author:
Ceyda Nurtsch
Date:
Mail:
Send via mail

END_OF_DOCUMENT_TOKEN_TO_BE_REPLACED
Social media
and networks
Subscribe to our
newsletter