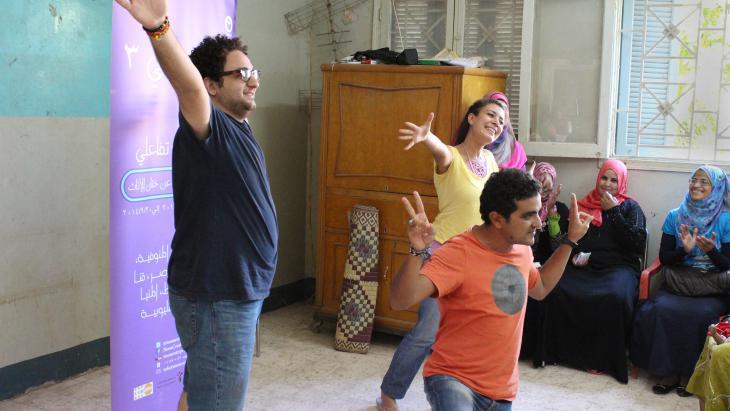 The group "HaraTV" in Egypt uses theatre to try to enlighten people about female genital mutilation. Elisabeth Lehmann attended one of their performances

"You have to circumcise your daughter. Otherwise, she will be led astray; she will look this way and that." Twenty-five-year-old Samy puts on a falsetto voice to imitate the old woman he is playing. The girls in the audience giggle. Samy wears a blue head scarf, which he holds together under his chin with one hand.

With exaggerated gestures, he tries to explain to his "daughter" why she must carry on the tradition of female circumcision. The daughter, however, refuses. A man playing a woman is a source of great amusement for the girls in the small auditorium of the community centre. The subject matter, on the other hand, is no laughing matter.

The theatre troupe "HaraTV" is today performing in Camboha, a small village near the city of Assiut in southern Egypt. "HaraTV" is made up of three actors and the director Nada Sabet. She interrupts the scene. "What have you just seen?" she asks the group of roughly 40 girls in the room. They are wearing colourful head scarves and long skirts. Embarrassed, many stare down at their mobile phones. The girls are of different ages, some perhaps only 13, others 20 or so.

But they all have one thing is common: they are circumcised. They themselves have first-hand experience of what they are watching in the play. According to UNICEF, more than 90 per cent of Egyptian women have had their clitoris and labia removed between the ages of nine and 15, sometimes by a doctor, often by a female circumciser in the village. At first, the girls in the audience are too ashamed to talk about the subject.

"That's why we're here. We want to use our performances to create an opportunity to talk about the difficult topic of female genital mutilation, beyond the confines of religion or medicine, in very practical terms," says Sabet. She wrote the piece and sold it to the United Nations, which is funding another 160 additional performances all over Egypt by the end of the year. Each of them is a balancing act for both actors and audience. 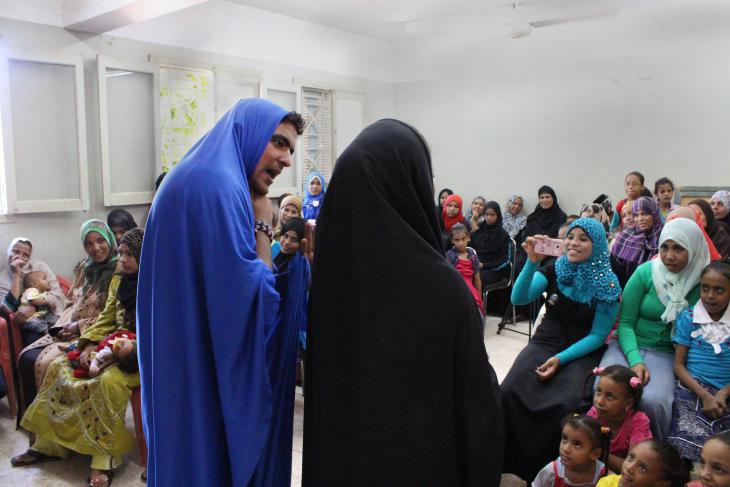 Getting people to think about traditions and who has control over a woman's body: the theatre group "Hara TV" uses simple comedy to daw people's attention to the reasons for and consequences of female genital mutilation. Here, actor Samy puts on a falsetto voice and plays an older woman trying to convince his "daughter" (Sherin) to have her daughter circumcised

Female circumcision can be found in all religions

Genital mutilation is a centuries-old tradition in Egypt that has nothing to do with religion, education or social background. It is a kind of tribal ritual that spread via the trade route that is the Nile River. A similarly high percentage of affected women can therefore be found in Sudan. Female circumcision has been a crime in Egypt since 2008. But tradition is stronger than the law.

Samy has switched roles. Now he is playing a man again. And he can't resist harassing women on the street, as befits any upstanding Egyptian male. He follows his colleague Ahmed around the small room, calling after him "Hey, what's up pussycat?"

Ahmed is wearing a pink dress, inspiring much mirth among the girls in the audience. "HaraTV" uses simple comedy to portray the life of a typical Egyptian woman; a life governed from the start by paternalism and regimentation; a life in which a woman's body, appearance and thinking are dictated by others. "Put something proper on! And keep your legs together, like every good girl should!" Ahmed faces the audience in his pink dress and lets the reprimands coming from those around him rain down on his head.

This scene is also followed by a discussion, and little by little, the girls start opening up. They describe their experiences: that they are not allowed to play in the street like the boys in the village, that they have many duties at home and in the fields. Slowly but surely they also pluck up the courage to speak about the actual topic of the play.

"All of us here are circumcised, of course," says Rada Abd El Sabour. The 18-year-old is dressed all in blue and her eyes are unusually pale for an Egyptian. She has an open, self-confident smile. "Now that I've seen the play, I understand the problems circumcision causes for girls."

Rada speaks in the third person, even though she is actually talking about herself. But it costs her quite an effort to talk at all about such a sensitive subject. Here in the sheltered setting, Rada puts into words what goes through the minds of many young girls: "I will certainly not circumcise my daughters, so that they don't have to suffer like I did."

In particular the younger generation reacts very openly to the piece, says director Nada Sabet during a short break between two performances. The troupe is sitting at a sidewalk café on the Nile embankment, drinking tea and recharging their batteries. They do an average of three performances a day. Every day it is a different village and different people, but always the same theme.

"It is important to us that we don't try to tell people what to do. We don't say that circumcision is good or bad." Nada takes a few pictures of the group and posts them on Facebook. "We listen to everyone's opinions. In the end people have to decide for themselves. We will be back on the road afterwards anyway."

Worlds collide when Nada and her colleagues come to a village. Cairo is very far away for the people out here in the countryside. City people have much more progressive attitudes. During the second performance of the day, the audience roars with laughter again when they hear Samy's falsetto and see Ahmed prancing around the room in his pink dress.

But this time there are also older women in the audience, the kind of women Samy is parodying in the play. Batta Abd El Munaim, for example, watched the play, but it has certainly not changed her mind: "It has to be; circumcision has to be," the 50-year-old repeats persistently. "It helps the girls to remain pure." What exactly she means by this is something Batta prefers not to say.

"I know that we can't change anything through our theatre alone," says Nada, but she still hopes that people will begin to think about whether this tradition makes any sense. And her concept is indeed bearing fruit. One woman in the audience speaks up. She has a 13-year-old daughter, she says. She has been deliberating for a long time whether to have the girl circumcised or not. But now that she's seen the play, she is sure that she won't. This is the kind of small success story that encourages the makers of "HaraTV" to repeat their show over and over again.

"The people aren’t ready for democracy" has been the constitutional basis for Arab tyranny, its favourite slogan and its sacred narrative for more than a century. Yet, asks Khaled ... END_OF_DOCUMENT_TOKEN_TO_BE_REPLACED

A new global database shows a significant gap in reported COVID-related deaths, suggesting the actual worldwide death toll is short by at least 1 million. That's due in part to ... END_OF_DOCUMENT_TOKEN_TO_BE_REPLACED

Two decades after the attacks of 11 September 2001, the West faces the shattered debris of its failure – not only in Afghanistan, but also in Iraq, Syria, Libya and Yemen. What ... END_OF_DOCUMENT_TOKEN_TO_BE_REPLACED

The coronavirus pandemic has turned lives upside down all over the world. In the Middle Ages, however, people lived with epidemics all the time. The best and most famous ... END_OF_DOCUMENT_TOKEN_TO_BE_REPLACED

In Ancient Egypt, the pharaohs had "solar boats" built to take them into the afterlife. One of these boats was discovered in 1954. It has now been moved to the Grand Egyptian ... END_OF_DOCUMENT_TOKEN_TO_BE_REPLACED

Attracting little attention from the world at large, Egypt's military regime has been mercilessly going after dissidents. Now, the first executions of prominent members of the ... END_OF_DOCUMENT_TOKEN_TO_BE_REPLACED
Author:
Elisabeth Lehmann
Date:
Mail:
Send via mail

END_OF_DOCUMENT_TOKEN_TO_BE_REPLACED
Social media
and networks
Subscribe to our
newsletter