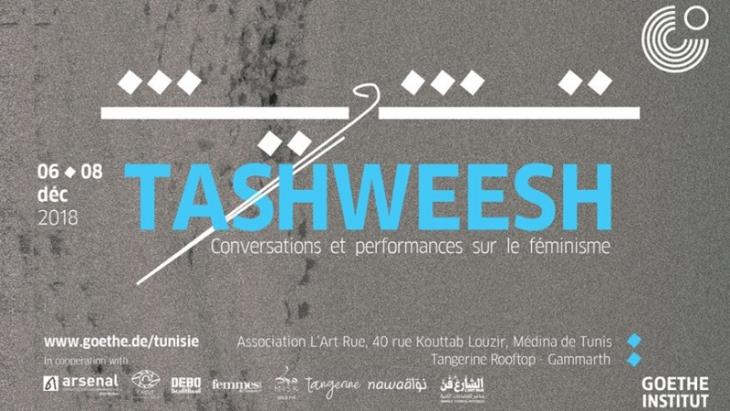 At the Goethe-Institutʹs Tashweesh Festival, artists and intellectuals from North Africa, Europe and the Middle East meet to discuss stereotypical gender images. By Caren Miesenberger

The buzz of voices, traffic noise, chants of the muezzins. Cairo is loud – and tashweesh is omnipresent. The Arabic word refers to the background noise in a telephone conversation or the roar of a crowd.

At the eponymous festival by the Goethe-Institut, feminists come together to exchange ideas and network. Artists, academics and activists from countries where Arabic is the official language and from various European countries attended the second Tashweesh stop in Cairo.

Following the launch in Brussels, the festival held from 6 to 12 November in Africa's largest city made the multitude of feminist voices audible and provided a platform for debate on stereotypical gender images. The festival is scheduled to take place in Tunis from 6 to 8 December. A mammoth project that took two years to prepare, as Johanna Keller, director of the cultural programme at the Goethe-Institut Cairo, explains in her opening speech.

One of the feminists presenting her work is Salma El Tarzi. The award-winning documentary filmmaker is presently working on sexism in commercial Egyptian film. In an installation as well as a lecture, the Cairo native analyses how rape and sexual assault are normalised in cinema and thus simultaneously reflect and manifest social conditions. 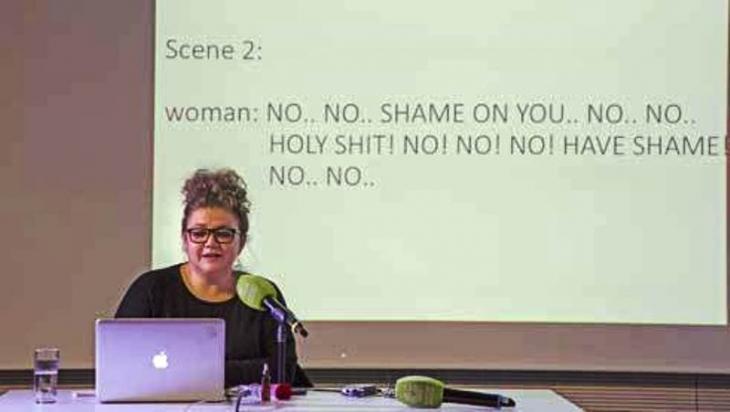 Salma El Tarzi analyses sexism in Egyptian films at the Tashweesh Festival. After Brussels, the mammoth project stopped in Cairo for a week and brought together feminist positions. It is currently running in Tunis

The forty-year-old projects scenes of molestation from popular films on the wall. During the screening, some men in the audience laugh. El Tarzi is visibly angry about that. She then comments, "What weʹre laughing about are physical assaults, rape attempts and trespassing. How can we see something like that and think itʹs funny? Thatʹs totally normalised." The audience applauds: a performative kind of feminist networking.

There is also exchange on the stages of the Tashweesh Festival with performances, round tables, workshops, concerts, readings and DJ sets. Almost all of the event rooms are packed. The Belgian performer Samira Saleh hosts a spoken word event where feminists bring their emancipatory art to the stage. "Thank you for allowing me to perform here and for Cairo greeting me more warmly than Germany has ever done," comments Mona Moon from Berlin.

Conditions reproducing colonialism are disrupted by the involvement of non-white feminists from the global North. The Indian political scientist Nikita Dhawan, who teaches at the University of Innsbruck and is one of the most important post-colonial theorists in German-speaking countries, talks about white feminism in Germany. "The German sociologist Beck argues that we are all in the same boat. I say maybe we are all facing same storm, but we are not in the same boat." She criticises the idea of a supposedly global sisterhood.

The feminists are getting louder

The painter Imane Ibrahim is enthusiastic, saying, "For me as a young Egyptian artist, this festival is a great opportunity. Itʹs very important to get together with other young people from the Arab region and Euro-Arab people." She applied for the Open Call, which was open to artists, activists and academics from all over the Arab world.

"I just met two other Egyptian artists I didnʹt know before. So weʹre not only networking internationally, but also at a local level. Thatʹs great!" continues the 28-year-old. The feminists are getting louder and louder, less tashweesh and more megaphone.

Home
Print
Newsletter
More on this topic
Interview with the Egyptian theatre director Laila Soliman: Revolutions past and presentBook review: Zahra Ali's "Islamic Feminisms": Female emancipation based on the spirit of Sharia Suspended Territories exhibition: Beyond the veil
Related Topics
Art, Dialogue of Cultures | Intercultural Dialogue, Feminism in Islam, Performing arts, Sexism and violence against women, Women in the Islamic world
All Topics

The European Union's top court has deemed kosher and halal slaughter incompatible with animal welfare. This is a grim day for religious freedom in Europe, writes Christoph Strack END_OF_DOCUMENT_TOKEN_TO_BE_REPLACED

One year after the burka ban in the Netherlands, Muslim women are reporting increased discrimination and violence. Adding to the frustration, face masks against coronavirus have ... END_OF_DOCUMENT_TOKEN_TO_BE_REPLACED

Belgium has been fighting religious radicalisation since it became painfully obvious that Islamists were operating in the country. Art and humour have become tools in the battle ... END_OF_DOCUMENT_TOKEN_TO_BE_REPLACED

In contrast to other cities in Belgium, violent Islamists have found next to no adherents in Mechelen. This is primarily due to the efforts of Mayor Bart Somers: he demands that ... END_OF_DOCUMENT_TOKEN_TO_BE_REPLACED

Iranian women′s rights activist Darya Safai fights the stadium ban for Iranian women from her exile in Brussels. An interview on her protest during the Olympic Games in Rio, the ... END_OF_DOCUMENT_TOKEN_TO_BE_REPLACED

Bader has achieved significant acclaim both in Arabic and in translation as an author of philosophical fiction. The Iraqi writer′s twelfth novel, ″Al-Kafira″ (The Infidel Woman), ... END_OF_DOCUMENT_TOKEN_TO_BE_REPLACED
Author:
Caren Miesenberger
Date:
Mail:
Send via mail

END_OF_DOCUMENT_TOKEN_TO_BE_REPLACED
Social media
and networks
Subscribe to our
newsletter