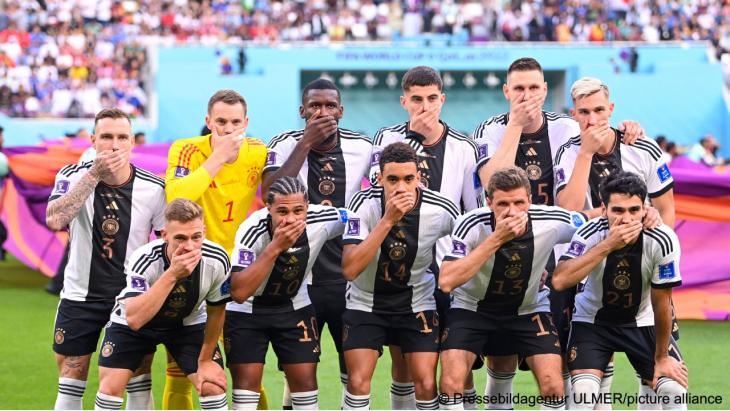 Protests by Western activists at the FIFA World Cup may have backfired and sparked a backlash against gay, lesbian and queer communities in Qatar, critics say. By Cathrin Schaer

Early in December, the US fast food chain Raising Cane's came under attack from conservatives in Kuwait. The fried-chicken specialist from Louisiana has 12 franchises there.

A man filmed the exterior of one of the drive-through restaurants and posted the video on social media, accusing Raising Cane's of promoting same-sex relationships because of its "one love" logo. The same logo was used by the Dutch football team, the man pointed out, referring to the fact that a number of European teams at the Qatar football World Cup wanted their captains to wear armbands from the "One Love" pro-diversity campaign.

The issue was discussed by conservative Kuwaiti politicians and one hard-line Islamist MP, Mohammed Al-Mutairi, later tweeted (see below) that the signs had been removed by municipal authorities. This was even though the restaurant has been using the same logo since the 1990s, when it was founded, and that it refers to the fact their "one love" is fried chicken. This week, a staff member at Raising Cane's who answered DW's call confirmed that the restaurant's "one love" sign had been removed.

This is not the only example of a recent rise in anti-LGBTQ sentiments in the Middle East. Also in Kuwait, there has been a billboard campaign, sponsored by local businesses, opposing same-sex relationships. The writer of an editorial for a local newspaper said the billboards were "a natural response to an unnatural, international campaign" to import "foreign" values to Kuwait.

In Iraq, in early December, the influential cleric Muqtada al-Sadr asked hundreds of his followers to sign a petition to "stand against homosexuality". In an interview with The Associated Press, one of those followers said his pledge was not a direct response to LGBTQ activism in Qatar, but, he added that "at the World Cup there were attempts to promote this issue by Westerners who came to the [games]." 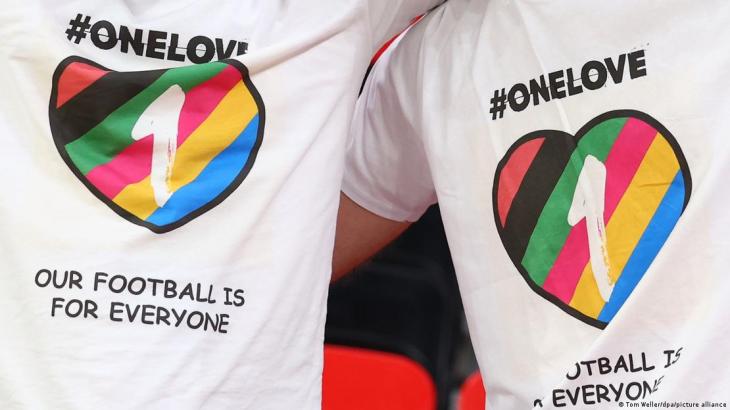 The "OneLove" armbands were originally launched in 2020 as part of an inclusiveness campaign by the Royal Dutch Football Association. Here, Belgian fans wear "OneLove" T-shirts at the Belgium v Canada World Cup tie in Qatar 2022

This is why some are now arguing that actions around LGBTQ rights in Qatar actually backfired. Critics say the protests spotlight a group that prefers to stay in the background in countries where most people still do not accept same-sex relationships.

In terms of law, countries in the Middle East either legislate that same-sex relationships are criminal or immoral and deserve jail time or worse. These policies appear to reflect public sentiment.

Some of the most recent research on attitudes toward same-sex relationships by the Arab Barometer survey found that, in the nine countries surveyed in 2018 and 2019, an average of only 12 per cent of locals were accepting of same-sex relationships. A Pew Research Center survey, also from 2019, came back with similar results.

Local members of the LGBTQ community are only too well aware of all this. So while there may be gay bars in Tunis or private parties in Dubai, they are never advertised as such and always attended with caution.

Acceptance of homosexuality varies but is low or extremely low across the MENA region. In Egypt, 12% of the citizens say homosexuality is acceptable.
Source: Arab Barometer Wav 5 (2018-2019) pic.twitter.com/ArNo0Mamdn

This is why "Western displays of solidarity with LGBTQ+ communities in the Middle East may be well-intentioned, but they are not constructive," Will Todman, a fellow in the Middle East Program at the Washington-based think tank the Center for Strategic & International Studies, wrote in a commentary published in mid-December. "They help build solidarity among activists in Western countries, but they are making the very people they claim to be helping in Middle Eastern countries feel more vulnerable."

Nas Mohammed, an asylum-seeker and doctor who lives in the United States and who is often referred to as the first Qatari to come out as gay in public, also told multiple media outlets that it is members of LGBTQ communities in Qatar who will be harassed and persecuted after Western activists leave.

"I think the Western media played a negative role," Sajjad Sabeeh, a young activist for LGBTQ rights based in the southern Iraqi city of Basra, told DW. "By talking about LGBTQ rights in Qatar so much, it allowed politicians to claim that LGBTQ rights are part of the West's agenda to dominate the region," he said.

"We're going to be suffering from the hangover of [activism at] the World Cup for a while," said Tarek Zeidan, director of one of the region's best known and longest-running LGBTQ rights organizations, Helem, based in Beirut. "It will be a very significant factor in the deterioration of safety, security and dignity of LGBTQ individuals across the region." 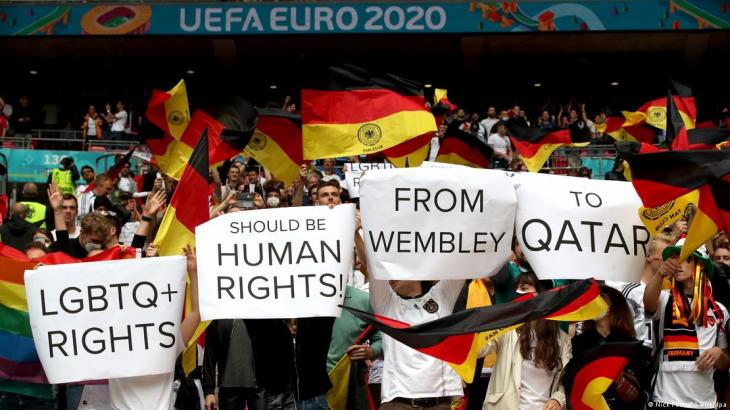 Even before the 2022 World Cup in Qatar, German fans publicly showed their support for the LGBTQ community at football matches, here at the Germany v England match at the European championships, London, 29 June 2021

Other factors besides Qatar

Zeidan thinks there are also other noteworthy factors that have resulted in what he calls a recent, "unprecedented" focus on the LGBTQ community in the Middle East. That includes more freedom of information in formerly closed societies, the globalization of culture and increased use of social media.

Zeidan and other experts also say that authoritarian governments and religious fundamentalists are stoking populist, public sentiment against LGBTQ communities in order to secure their own power and moral authority, and to distract from their failings in governance. It's become a kind of culture war, they say.

The confluence of all these factors both increase the lesbian, gay and queer community's visibility, and the pushback against it, Zeidan explained.

"Depending on who you ask, some activists say it's a good thing [to be more visible]: Queer people are finally on the battlefield, right?" he said. "But others disagree and consider this one of the worst things that could happen because we're not prepared for the onslaught." 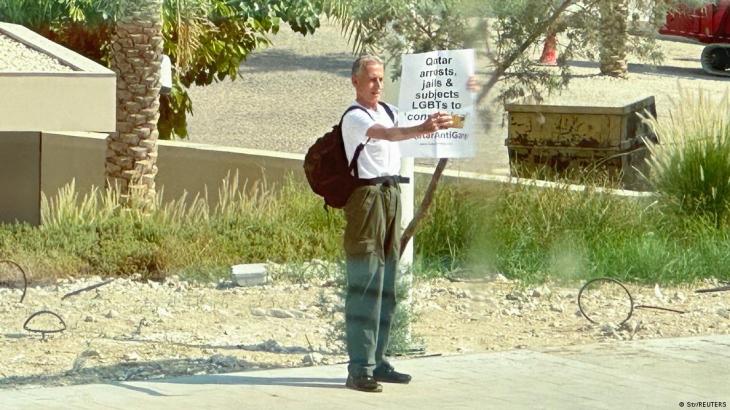 In a statement released after England and other European teams at the World Cup abandoned plans to wear rainbow-themed armbands in support of LGBTQ rights, Veteran British LGBT rights campaigner Peter Tatchell said: "The OneLove armband was the tiniest of gestures. It was a weak campaign, but even that was too much for FIFA, who have bullied the England team to not wear it." He is pictured here protesting in October against Qatar's stance on LGBTQ rights outside the National Museum of Qatar

Learning from their mistakes?

In either case, events during the World Cup in Qatar did absolutely nothing to help, Zeidan argued.

"The otherwise valid criticism concerning Qatar's dismal human rights record was politicized and far from nuanced, which allowed for a massive rally-around-the-flag effect, or against the [rainbow] flag in this case," he said. "It helped to reinforce ideas that queer people are a Western import and a political tool for settling scores."

If anything positive was to come out of the Qatar experience, it could be lessons about what to do next time there's a mega-sports event in the Middle East, something that is increasingly likely.

Different tactics are required, argued James M. Dorsey, an expert on the region at Singapore's Rajaratnam School of International Studies and author of a blog, The Turbulent World of Middle East Soccer. "One potential tactic may be to build on the positions of credible, albeit often controversial, Muslim scholars," he wrote this week. He referred to several who see homosexuality as a sin that will be punished in the afterlife, but who don't believe that earthly authorities should have any say.

"Theirs is a formula that neither legalizes nor legitimizes homosexuality nor removes the stigma," Dorsey said. "But it does avoid criminalization and significantly enhances the lives of members of the LGBT community." LGBT rights in the Middle East can "only be achieved step by step," Dorsey noted.

"Educate yourself. Check your assumptions," advised Helem's Zeidan. "Elevate the voices of Qatari and Gulf activists and don't obscure them with your own. By doing that, you disprove the myth that LGBTQ people are a Western import and that our cause is illegitimate," he concluded.

How is one to convey the history of Islamic images of Muhammad freed from today’s polarised politics? What are the challenges and pinch points of this particular academic ... END_OF_DOCUMENT_TOKEN_TO_BE_REPLACED

The devaluation of the Egyptian pound combined with rising food prices is taking its toll on Egypt. More and more people are slipping into poverty. Karim El-Gawhary reports from ... END_OF_DOCUMENT_TOKEN_TO_BE_REPLACED

Chinese President Xi Jinping's visit to Saudi Arabia in December 2022 may have rattled Washington, but it simply highlighted the Arabs’ desire to diversify their foreign relations ... END_OF_DOCUMENT_TOKEN_TO_BE_REPLACED

Lebanon was long viewed as the Switzerland of the Middle East. Until relatively recently, billions were deposited in its banks. Gulf states were among the foremost investors in ... END_OF_DOCUMENT_TOKEN_TO_BE_REPLACED

According to a recent survey, half of all Iranians say that they have left Islam as a religion, while two-thirds believe Islamic law should be excluded from their legal system. In ... END_OF_DOCUMENT_TOKEN_TO_BE_REPLACED

Since Russia invaded Ukraine, Europe has been trying to find alternatives to Russian gas, inevitably zeroing in on the Arab Gulf states. In his commentary, Yemeni politician ... END_OF_DOCUMENT_TOKEN_TO_BE_REPLACED
Author:
Cathrin Schaer
Date:
Mail:
Send via mail

END_OF_DOCUMENT_TOKEN_TO_BE_REPLACED
Social media
and networks
Subscribe to our
newsletter