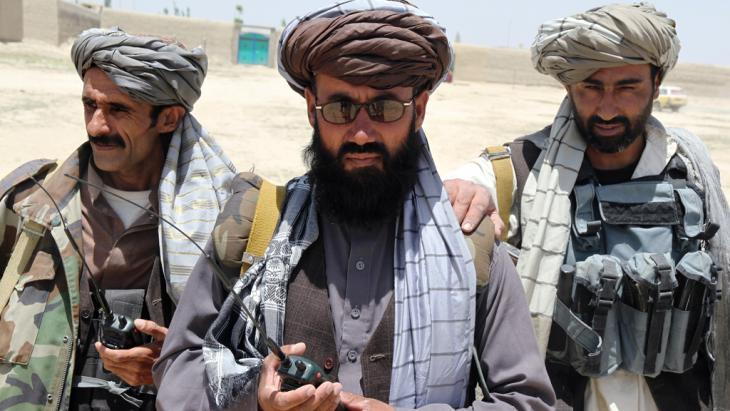 Fighting the Taliban in Afghanistan
Where the warlords still hold sway

The militias of Afghan warlords have always occupied a dubious position in the life of the country. But Kabul relies on them as allies in the battle against the Taliban – a strategy, however, that is having the opposite effect. By Emran Feroz

According to a report by "Human Rights Watch" (HRW) at least four civilians were killed and 20 others injured during an anti-Taliban operation at the end of June in a Pashtun village in northern Afghanistan. The report says that in the operation, which also involved the Afghan army, a leading role was played by the Uzbek Junbish militia commanded by the warlord and current vice president of the nation, Abdul Rashid Dostum.

The HRW report claims that after the withdrawal of Taliban fighters, the Junbish militia raided at least four other villages, this time without government troops. Five civilians were killed during this undertaking and 12 others injured. The HRW report quotes eyewitness reports claiming that the Junbish fighters had been terrorising the village for several months. The witnesses said that the villagers had been attacked because of their ethnic background. They were told, among other things, that they "had no rights in any case", as they were Pashtun.

"Human Rights Watch" criticises the government in Kabul for allowing Dostum's militias to operate freely, instead of reining them in. The organisation emphasises that militias loyal to the government continue to endanger the security situation in Afghanistan.

"The killings in the province of Fariab are just the latest in a whole series of atrocities committed by Dostum's militias," writes Patricia Gossman from HRW. "The fact that neither these forces nor Vice President Dostum have ever been called to account for these is undermining the security situation in northern Afghanistan."

War crimes swept under the carpet

The ongoing power of the militias and warlords, whose rise began in the era of resistance to the Soviet Union and the ensuing civil war, was from the outset a hindrance to the democratic reconstruction of Afghanistan. "All these people play a key role in the overall political system, as it was set up after 2001," explains Thomas Ruttig, co-Director of the "Afghanistan Analysts Network". 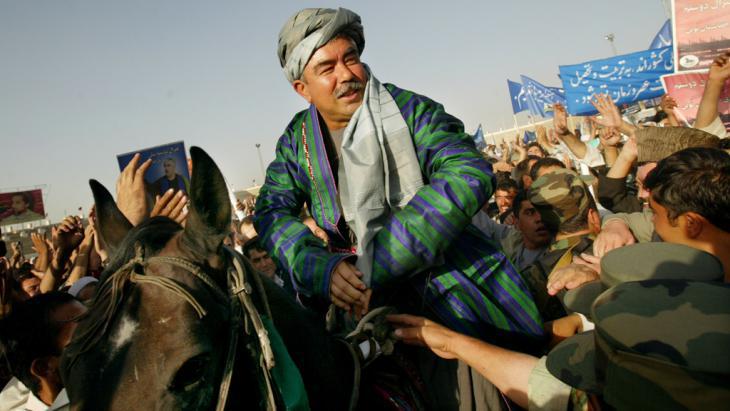 Warlord, militia leader and currently Afghanistan′s vice president: during the Soviet occupation, Abdul Rashid Dostum was a general in the Afghan army. Once the Soviets pulled out, he established his own militia. Dostum and Atta Mohammad Noor, governor of Balkh province, have been enemies for years, despite have entered an alliance against the Taliban in July. In the past there have been bloody encounters between their militias – mostly at the expense of civilians

"Apart from a few, low-ranking exceptions, no one was brought to trial for human rights violations or war crimes that are documented by name. Instead, under US-American leadership, the so-called 'big tent' principle was introduced. This envisaged everyone sitting together under the same political umbrella to prevent disruption from outside. This enabled them to dominate the system from within," says the Afghanistan expert.

As well as Rashid Dostum, these individuals also include names from the Karzai era such as Karim Khalili, Abdul Rab Rasul Sayyaf and the late Mohammad Qasim Fahim, all of whom faced accusations of numerous human rights violations. The same applies to leaders in rural areas. Better-known examples here are the former governor of Herat, Ismail Khan and Atta Mohammad Noor, regarded to this day as the invincible governor of the province of Balkh.

In giving free rein to the frequently brutal militias, observers see a reason for some of the Taliban's successes. For example, in its temporary capture of the provincial capital Kunduz last year. NATO holds deficits in the command structure of the regular Afghan army primarily responsible for this spectacular, if short-lived coup.

On the other hand, political scientist Jason Lyall from Yale University believes that the Taliban conquest of Kunduz could have been predicted. "In the two preceding years the Taliban had slowly but surely expanded its influence in the regions around Kunduz. It also controlled neighbouring districts in the provinces of Baghlan and Takhar," says Jason Lyall. "The Taliban exploits the absence of the weak central government in Kabul as well as the presence of corrupt and violent militias to recruit Afghan civilians and portray itself as the supposedly better political alternative," says Lyall, whose chief research areas include Afghanistan.

For the Kabul political analyst Waheed Mozhdah too, one thing is clear: "The actions of the militias in the absence of any state order is quite frankly driving people into the arms of the Taliban." A theory that is supported by the latest attacks by Dostum's militias, which appear likely to go unpunished.

Since seizing power in mid-2021, the Taliban have continued to restrict the rights of Afghan women and girls. At the end of 2022, they banned women from attending higher education ... END_OF_DOCUMENT_TOKEN_TO_BE_REPLACED

Since returning to power in Afghanistan, the Taliban have steadily eroded the rights and opportunities of women and girls, particularly their access to education. But Afghans are ... END_OF_DOCUMENT_TOKEN_TO_BE_REPLACED

German imams have publicly expressed their solidarity with the women of Afghanistan. In a letter of protest, the clerics say that the Taliban regime's decree barring women from ... END_OF_DOCUMENT_TOKEN_TO_BE_REPLACED

At the end of every year, the team at Qantara.de gives you a run-down of the ten most-read articles on the site over the past 12 months. Here is a quick overview of the stories ... END_OF_DOCUMENT_TOKEN_TO_BE_REPLACED

The "Weiter Schreiben" (Keep Writing) project promotes literature from war-torn and crisis-stricken regions and has, most recently, shone its spotlight on Afghanistan. Afghan ... END_OF_DOCUMENT_TOKEN_TO_BE_REPLACED

The Islamic Republic has been unable to quell the civil unrest that erupted three months ago, after Mahsa Amini died after being detained for violating hijab rules. Now the ... END_OF_DOCUMENT_TOKEN_TO_BE_REPLACED
Author:
Emran Feroz
Date:
Mail:
Send via mail

END_OF_DOCUMENT_TOKEN_TO_BE_REPLACED
Social media
and networks
Subscribe to our
newsletter