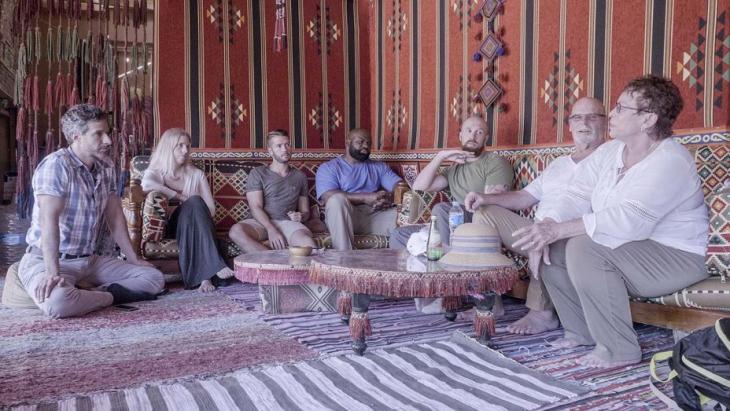 Film review: "Free Trip to Egypt"
Into the great unknown

The idea of taking a group of US citizens from Trump's America on a free cultural exchange trip to Cairo, Egypt, sounds like either a lunatic plan or somebody's idea of a bad practical joke. Yet this is just what Tarek Mounib did. The film "Free Trip To Egypt" documents how he came up with the idea and implemented it. By Richard Marcus

Tarek Mounib had a crazy idea: why not offer Americans a free trip to Egypt for a cultural exchange and see what happens. The film Free Trip To Egypt – co-produced by Mounib, an Arab/Canadian now living and working in Switzerland, and directed by American/Romanian Ingrid Serban – traces the steps he took to find people willing to leave their preconceptions and baggage behind in order to fling themselves into the unknown. More than that, they would have to overcome the decades of misconceptions that they had been fed about the Arab world by their media and politicians.

Not surprisingly, perhaps, the offer of an all-expenses-paid trip to Egypt doesn't seem to enthrall that many people. However, Mounib is nothing if not an optimist and he persists. He's interviewed on radio shows, has rapper Adam Saleh stand on the streets of New York City holding up a sign advertising a "Free Trip To Egypt", and goes into the heartland of the supposed enemy by attending a Trump rally in Louisville, Kentucky, in his attempts to find people willing to make this leap.

Seven set off on an adventure 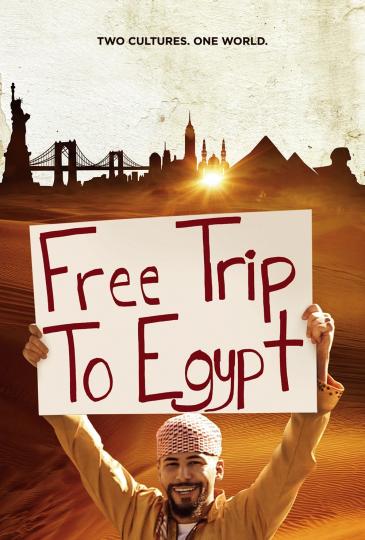 It's at this Trump rally that he finds four of the seven people who eventually join him for the adventure. One of these people is ex-marine corporal Brian Kopilec, who in turn introduces him to friends Jason Reynolds and Jenna Day. The latter two are both born-again Christians; Day is also a former Miss Kentucky.

At the same Trump rally where he met Kopilec, Mounib also meets African American police officer Marc Spalding. He too likes the idea. The final three people who make up the group are husband and wife Ellen and Terry Decker and another ex-Marine, single mother Katie Appledorn.

Ellen Decker describes herself as an ex-radical who protested against the Vietnam war in the 1960s, but after 9/11 became afraid. She was astounded by how racist she has become and is determined to find her way out of that maze. Appledorn is originally from Nebraska – the Bible belt as she calls it ‒ and talks about how her family were scared she'd be beheaded or sold into sex slavery if she went on the trip.

To ensure total immersion in Egyptian culture, each of the American participants is teamed up with hosts in Cairo. These range from modern young people to an orthodox religious family. The Americans spend their days with the hosts and their families, touring museums, going to their homes and exploring the Egyptian capital.

Watching the interactions between them, we see the initial nervousness on both sides start to wear off. Kopilec, who is paired up with modern dancer/choreographer Salma Salem, laughs when he talks about how they have being under fire in common. Salem had been shot at when she participated in the Arab Spring protests. While not all of them have that unique experience in common, they all make connections with their hosts.

It probably won't come as too much of a surprise that the conservative Christian duo of Day and Reynolds bond with their conservative Muslim hosts, the Madkors. While they might not follow the same belief systems, they both believe in a very singular version of their faiths.

A very different view of Egypt

While the film is a bit of a travelogue in that the "tourists" and their hosts are ferried to spots around Cairo, museums and the great pyramids, they also travel to parts of the city tourists don't see. The Americans visit the homes and neighbourhoods of their hosts and their families. These excursions take them down narrow side streets, some of which are probably older than their home country.

Obviously the film focuses on the ability of the Americans and their hosts to find common ground. However, that doesn't mean they gloss over points of conflict. Kopilec attends a party with friends of Salem, and what starts off as a heated argument about American policy in the Middle East is only diffused by the woman he's arguing with saying she's glad Trump was elected because at least with him they know where they stand, whereas Clinton was a devious snake. He laughs and agrees.

Americans who see the film will also see the diversity of the population represented by the host families. While Nevine Madkor wears a full Burka and her daughters both wear hijabs, Harley Davidson-driving Salem and her friends represent a new generation. In fact, most of us would be hard pressed to tell the difference between them and any group of progressive Americans.

How much of an impact did this trip have on the individuals involved? We don't see any follow-up with the Egyptian participants, but for each of the Americans it does appear to open their eyes to the fact the world isn't as black and white as they've been led to believe. These so-called enemies, Muslims and Arabs, have as much in common with them as anybody else.

In fact when Terry Decker suddenly died shortly after they return to the US, his wife, Ellen, asked Mounib to arrange for her and her son to travel to Egypt to scatter his ashes in the desert. For a man whose own son had described him as somewhat xenophobic to travel so far in his ability to accept other people that his wife wanted his ashes scattered in a foreign country is a sign of incredible hope.

While the trip might not have had as dramatic an impact on all its participants, it did open their eyes to other realities and made them realise that the world isn't as cut and dried as they were led to believe by their politicians. Free Trip To Egypt isn't going to suddenly change the world, but that's not what it set out to do anyway. It wants people to start talking to each other, and to really listen to each other's answers.

Free Trip To Egypt is a wonderful film about a brave experiment in overcoming people's pre-conceptions and prejudices to help find common ground. Seven brave people and their hosts reached out in an attempt to bridge a gap that has grown deeper and wider in recent years. Perhaps that's the way to find a way forward – one person at a time talking to another person. A good way to find common ground.

Home
Print
Newsletter
More on this topic
Fighting Western reductionist perceptions: Arab, Muslim – whatʹs the difference?When East meets West: Debunking the "clash of civilisations" myth The Virtual Iftar Project: "It is harder to ignore, vilify or harm those with whom we have broken bread"
Related Topics
9/11, Christianity, Cinema, Dialogue of Cultures | Intercultural Dialogue, Dialogue of Religions, Racism | discrimination
All Topics

The devaluation of the Egyptian pound combined with rising food prices is taking its toll on Egypt. More and more people are slipping into poverty. Karim El-Gawhary reports from ... END_OF_DOCUMENT_TOKEN_TO_BE_REPLACED

Abortions are illegal in Egypt unless they are necessary to save a married woman's life. But that doesn't stop local women from having one. Egyptian society needs to acknowledge ... END_OF_DOCUMENT_TOKEN_TO_BE_REPLACED

Food prices doubled, salaries halved, banks restricting withdrawals: Egyptians now have the same problems as the Lebanese. But if things get worse here, the fallout will be far ... END_OF_DOCUMENT_TOKEN_TO_BE_REPLACED

Giessen, Eichsfeld, Kusel, Berlin – cars bearing old German number plates are the latest trend on the streets of Cairo. Many Egyptians regard the discarded plates as chic. What ... END_OF_DOCUMENT_TOKEN_TO_BE_REPLACED

Egyptian Sufis have been on the defensive against the country's Islamists for decades. Meanwhile, interest in mysticism is growing among the young members of Cairo’s middle and ... END_OF_DOCUMENT_TOKEN_TO_BE_REPLACED

END_OF_DOCUMENT_TOKEN_TO_BE_REPLACED
Social media
and networks
Subscribe to our
newsletter