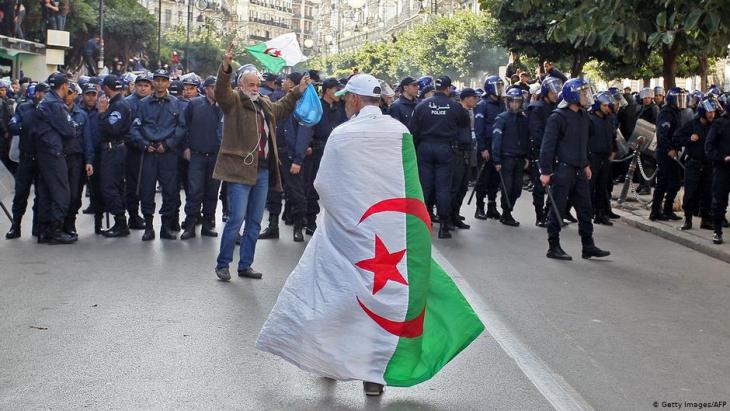 Few would have thought that Algeria's Hirak protest movement would still be mobilising the masses 12 months on from its first peaceful demonstration. According to Isabelle Werenfels and Luca Miehe, the systemic change people hoped for post-Bouteflika has yet to materialise. External players need to brace themselves for ongoing political turbulence

One year after the start of on-going mass protests, the Algerian regime has – contrary to many predictions – neither collapsed nor resorted to serious violence. Nevertheless, the situation in Africa's largest country remains volatile. The controversial election of the new president Abdelmajid Tebboune in December was unable to change this. Tebboune and several members of his cabinet served under former President Bouteflika and there are strong indications that military elites still wield more power than the president.

Meanwhile, every week, tens of thousands of Algerians demonstrate peacefully for a democratic transition and the rule of law. They march against the president – whom they do not see as the country's legitimate leader – and for the resignation of everyone involved in the corrupt networks of the Bouteflika era (1999–2019). In view of the protest movement's lack of leadership and  structure, differences of opinion on strategy and objectives, and the absence of tangible success with regard to system change, it is remarkable that people are still taking to the streets week after week.

Even though the regime has kept things firmly in hand thus far, the stamina and determination of the Hirak protest movement begs the question as to who will be more resilient, the regime or the Hirak? Moreover, it is also not clear on which side the country's "silent majority" will come down.

The government strategy: carrot and stick

Since taking office, President Tebboune has been struggling to be viewed as the country's legitimate leader both at home and abroad. Domestically, the signals he has sent out have oscillated between promises of democratic reform and continuing authoritarian practice, between co-optation and repression. He has taken steps towards constitutional reform, released just under 10,000 prisoners, and announced that he would step up the fight against corruption, streamline the administration, and foster a start-up culture. Several people who are supportive of the Hirak have been appointed to the government.

In addition, after years of paralysis, the country's engagement at international level – especially in the Libya conflict – has been stepped up, partly in order to shore up the president’s legitimacy back home. To this end, Tebboune travelled to the Libya conference in Berlin in January, while numerous heads of state and government, not to mention foreign ministers from several countries, including Turkey, Italy, France and Germany, have paid visits to Algiers in early 2020.

At the same time, however, activists are regularly being imprisoned and prominent members of the opposition are still behind bars. Just like their predecessors, Tebboune and the military’s new chief of staff have been using the exploitation of nationalist feelings, discrimination against Berber symbols, people's fear of destabilisation and the claim that external forces are manipulating the protesters – all to discredit and divide the Hirak. The regime is obviously counting on the protest movement running out of steam. That way, it won't have to soil its hands by getting the security forces to crack down on protests.

Division and ritualisation pose a threat to the Hirak

Yet, this scenanio may not materialise all that easily. One of the key achievements of the Hirak movement is the re-mobilisation and re-politicisation of a society that had been prevented from taking any kind of civilian action for many years by a ban on demonstrations, the actions of the security forces, the trauma of the civil war in the 1990s, and generous distribution of the oil rent. Bouteflika‘s resignation and corruption trials against members of the political and economic elite are viewed by the Hirak as intermediate victories in a long campaign. As long as there is no real democratic transition in sight, it intends to go on protesting.

Chinese President Xi Jinping's visit to Saudi Arabia in December 2022 may have rattled Washington, but it simply highlighted the Arabs’ desire to diversify their foreign relations ... END_OF_DOCUMENT_TOKEN_TO_BE_REPLACED

Nouara may be 65, but she is ready to join thousands of others who burn their ID and pay traffickers for the chance of a new life in Europe. Zineb Bettayeb reports END_OF_DOCUMENT_TOKEN_TO_BE_REPLACED

In Doha, Arabs from Morocco, Tunisia, Egypt and Algeria are gathering to celebrate the first ever FIFA World Cup to be held on Arab soil. The criticism from Europe? Over the top, ... END_OF_DOCUMENT_TOKEN_TO_BE_REPLACED

"Rebel Game: The Power of Football in the Middle East and the Qatar World Cup", an anthology published by Middle East researchers Jan Busse and Rene Wildangel, takes the upcoming ... END_OF_DOCUMENT_TOKEN_TO_BE_REPLACED

After a two-year hiatus, the Arab League re-convened at the beginning of November in Algiers against a backdrop of uncertainty and discord. By Pierre Boussel END_OF_DOCUMENT_TOKEN_TO_BE_REPLACED
Author:
Isabelle Werenfels & Luca Miehe
Date:
Mail:
Send via mail

END_OF_DOCUMENT_TOKEN_TO_BE_REPLACED
Social media
and networks
Subscribe to our
newsletter