Skip to main content
First Mosque for Women in Kabul

"God Isn't Only There for Men"

Over the past few decades, women in Islamic countries have rediscovered going to the mosque. These developments are now gradually being felt in Afghanistan. The first official mosque for women recently opened in Kabul. By Ratbil Shamel

Over the past few decades, women in Islamic countries have become more self-assertive and have also rediscovered going to the mosque. These developments are now gradually being felt in Afghanistan. The first official mosque for women recently opened in Kabul. Ratbil Shamel reports 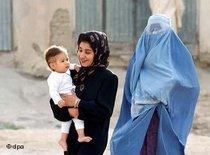 For many Afghan women, attending the women's mosque is the first step towards emancipation

​​The imam calls the faithful to prayer and Muslims all over the world heed this call five times a day - even in Afghanistan. Just as in most other predominantly Islamic countries, the mosques of the Hindu Kush are almost exclusively attended by men.

Things are now about to change – at the request of many women, especially those living in the capital Kabul. In addition, the State Ministry for Religious Affairs has given its expressed permission and support.

God is not only there for men, argues the Afghan Women's Association. Women want to be more visible in public. The mosque as a house of God should no longer remain the exclusive domain of men.

Following a request from the women's association, an existing mosque in the east of Kabul was renovated a few months ago and officially declared a "mosque for men and women." They weren't given the whole of the Imam Ali Mosque. Even so, the second floor of the building is now reserved for women. There is room for 150 persons.

"The opening of the women's mosque has been a historic success for us. It is the first such mosque in the history of our country. And I am certain that we will witness the establishment of other such houses of God throughout the whole of Afghanistan," said Roh Afzah from the Ministry for Religious Affairs enthusiastically.

Outside of Kabul, however, tradition still reigns. For the most part, traditional practices are respected more than state law – and, in effect, even more than religious prescripts. The majority simply ignore the fact that men and women have an equal right to pray in the mosque. Tradition restricts the role of women to the domestic sphere. Public space is set aside for men.

What is possible in Kabul isn't necessarily applicable to other areas of Afghanistan. Nevertheless, many Afghan women's associations have been campaigning for the establishment of women's mosques outside of Kabul. They argue that in the long term, equal treatment in religious matters will also strengthen the role women play in society.

This is why they are not only promoting the setting up of further women's mosques, but also for mullahs to preach there. "We want mullahs who will inform women on their religious rights!" demanded one woman from Kabul.

So far, the Imam Ali Mosque is an experiment with as yet unforeseeable consequences. There has been no opposition to the "women's mosque" in Kabul. Surprisingly, conservative religious and fundamentalist circles have as yet remained reserved in their criticism. Despite this, opposition is expected.

Discussion on issues of faith

The supporters of women's mosques no longer want conservative groups stipulating how they should practice their faith.

They also demand the right to have a say in religious matters. They aren't the only ones making such a demand. For months now, women Islamic scholars have been discussing matters of faith with their male counterparts on private Afghan television and have provided alternative interpretations to religious sources.

The opening of the women's mosque is for many Afghan women a small step towards equal treatment – even when the number of women attending the Imam Ali Mosque remains comparatively quite small. One male frequenter of the mosque, however, hopes that this will gradually change.

"Women are still being forced to do a lot of work at home. Many just can't find the time to attend the mosque. Yet, I think this will change. When women somehow manage to find more time, they too will come here more often."

Amnesty Report Afghanistan
Women's Rights only on Paper
The situation of women in Afghanistan is still appalling, claims the latest report from Amnesty International. Equality, as envisioned in the Afghan constitution, is still decades away. But small advances have been made. Petra Tabeling reports

The Afghan Magazine "Malalai"
The Voice of Afghan Women
Jamila Mujahed is editor of the only women's magazine in Afghanistan. For her work on the magazine "Malalai," which she founded to promote women's rights, she has been awarded the Johann Philipp Palm Prize. Petra Tabeling reports.

The Voice of the Afghan Woman
Gradually Breaking out of Isolation
Since the Taliban regime was toppled in Afghanistan, women have been able to play a greater role in society again. A radio station for women recently hit the airwaves. Ratbil Shamel reports