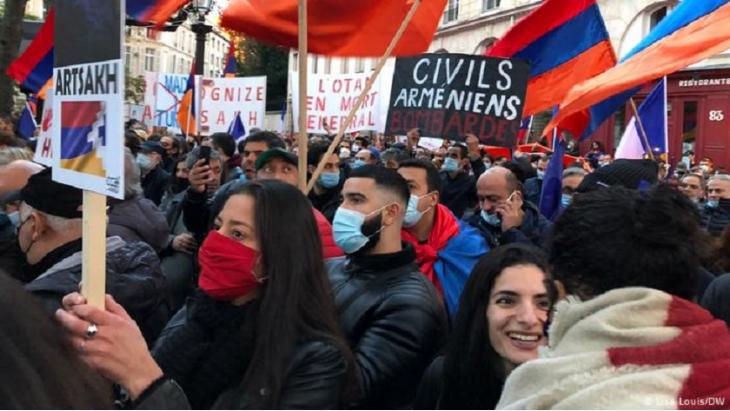 The Armenian diaspora in France – the largest in Western Europe – is urging the country to do more to support Yerevan in the Nagorno-Karabakh conflict. But Paris is, so far, acting with restraint. Lisa Louis reports

Dozens of women and men hurry along a street towards a square behind France's National Assembly in Paris. They are waving Armenia's red, blue and orange flag, or have it draped over their bodies. Some hold up signs that read "Recognise Karabakh", while many chant Hayastan, or Armenia.

The protesters are gathering on a Tuesday afternoon to demand France support Armenia in the conflict with Azerbaijan over the Nagorno-Karabakh region. After all, France harbours Western Europe's biggest Armenian diaspora with up to 600,000 members. But, for now, Paris is showing restraint in its support for the Armenian side – at least when it comes to action.

"This is a cry from the heart," Franck Papazian yells into a microphone, addressing the crowd that has since swelled to several hundred people. He is co-president of the Coordination Committee of Armenian Organisations in France (CCAF), which organised the demonstration in Paris and a dozen others across the country in recent weeks.

"We can't just let this massacre happen – we need peacekeepers in the region!" he pleads. "Please, we are asking you. You won't be able to say afterwards that you didn't know what was happening." 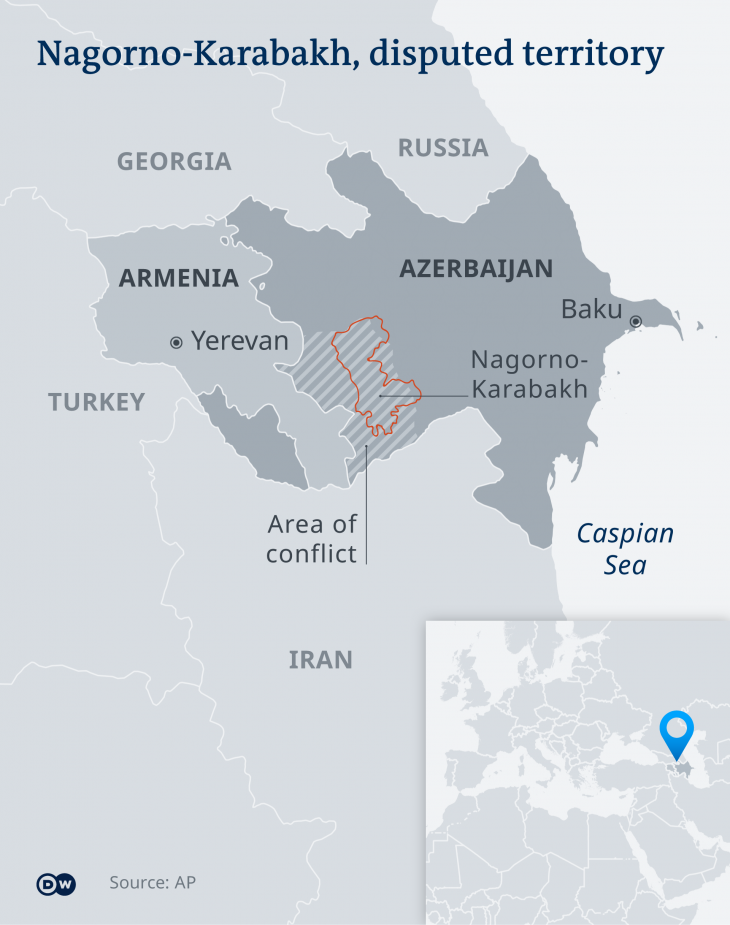 Are comparisons with the Armenian genocide justified? Azerbaijanis slaughtered more than 20,000 Armenians in Baku in Azerbaijan in September 1918 – under the supervision of the Turkish army. "Both Azerbaijani and Turkish identities are based on a hatred of Armenians, who have been their scapegoats for more than a century and whom they consider their arch enemies," says Mikael Nichanian, a French-Armenian historian and curator at the National Library of France

Turkey "has crossed a red line"

The decades-old conflict over the region erupted afresh in late September. The ethnically Armenian region belongs to Azerbaijan, but has been controlled by Armenians since the 1990s. Several hundred people have been killed in the recent fighting, while tens of thousands have been displaced, according to local officials.

French President Emmanuel Macron early in October accused Turkey of sending hundreds of mercenaries and jihadists to help Azerbaijan. "[Turkey] has crossed a red line – that's unacceptable," he said. He added that, as co-president of the OSCE Minsk Group, he has pleaded for an immediate ceasefire in the region.

The organisation was set up in 1992 to mediate in the Nagorno-Karabakh conflict and is also co-chaired by the U.S. and Russia. But two ceasefires, negotiated recently by Russia and the OCSE Minsk Group, were almost immediately breached, with both sides accusing each other of violating them first.

Home
Print
Newsletter
More on this topic
Armenia and Azerbaijan allege breaches as new ceasefire beginsThe Armenian genocide: The search for truth and the historical contextRelations between Armenia and Turkey: Uncertainty until the end
Related Topics
Armenians, Christians in the Islamic world, Emmanuel Macron, History of the Near and Middle East, Minorities in the Muslim world, Nagorno-Karabakh conflict, Recep Tayyip Erdogan, Vladimir Putin
All Topics

The balance of power on Europe's eastern borders is shifting. Georgian historian Beka Kobakhidze speaks from Tbilisi about rivalry and emerging alliances in the region, an ... END_OF_DOCUMENT_TOKEN_TO_BE_REPLACED

After more than a month of war, there is a new ceasefire between Armenia and Azerbaijan. But whether it will last remains questionable. The conflict in Nagorno-Karabakh sees ... END_OF_DOCUMENT_TOKEN_TO_BE_REPLACED

Sensitive to the threat of wider confrontation, Russia and Turkey are for now limiting involvement in the Nagorno-Karabakh conflict to providing humanitarian assistance and some ... END_OF_DOCUMENT_TOKEN_TO_BE_REPLACED

Azerbaijan and Armenia have been at war again over the Nagorno-Karabakh region in the South Caucasus for over a month. Three ceasefires have failed. The conflict is taking its ... END_OF_DOCUMENT_TOKEN_TO_BE_REPLACED

Fraught with disagreement, relations between the EU and Turkey under Erdogan have rarely been easy. Bearing in mind recent developments, the Union needs to present a clear and ... END_OF_DOCUMENT_TOKEN_TO_BE_REPLACED

The outpouring of solidarity worldwide following the violent death of George Floyd should prompt us to step back and fundamentally question racist structures and privileges based ... END_OF_DOCUMENT_TOKEN_TO_BE_REPLACED
Author:
Lisa Louis
Date:
Mail:
Send via mail

END_OF_DOCUMENT_TOKEN_TO_BE_REPLACED
Social media
and networks
Subscribe to our
newsletter