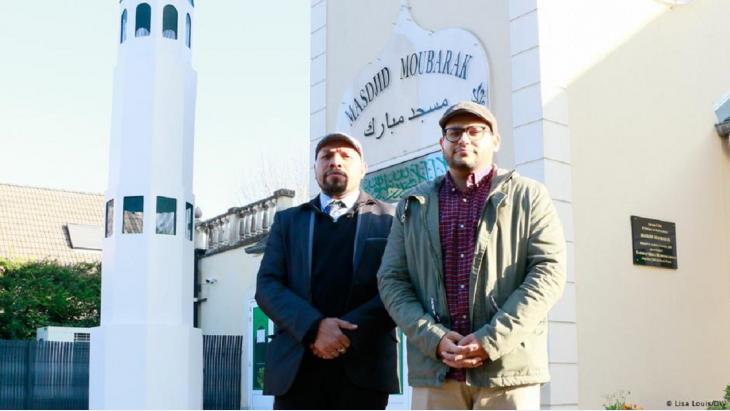 Critics of France's draft law to combat "radical Islamism" say the proposed measures are inefficient and will further stigmatise Muslims. They assert that involving Muslims in the process of addressing radicalisation is essential. Lisa Louis reports

Irfan Thakar and Omar Ahamad feel misunderstood as Muslims in France. They are members of the Ahmadiyya Muslim Community in Saint-Prix, a northern suburb of Paris. As the imam, the 30-year-old Thakar regularly leads the prayer at the Moubarak mosque, which features a green-and-white carpet and large windows that let in lots of light.

"I am French," declared Thakar, sitting in a room adjacent to the prayer room and sipping a glass of multivitamin juice. "And, yet, I have to explain that over and over again to non-Muslims," he said. "Many people think Islam is incompatible with France – but that's simply not true."

Ahamad, sitting in an armchair next to him, nodded his approval. "We are being treated as if we belonged to a different nation, a different race," he said. "That's also due to the fact that the media only talks about Islam when there has been another terror attack."

They mention the speech President Emmanuel Macron gave in the suburb of Les Mureaux, just 30 kilometres west of Saint-Prix, in early October. "Macron talked about 'Islamist separatism' and said that Islam was in crisis," Thakar said. "How can he say something like that? That's highly stigmatising."

The alienation Thakar and Ahamad have felt is likely to increase should a series of new measures proposed by France's government pass. 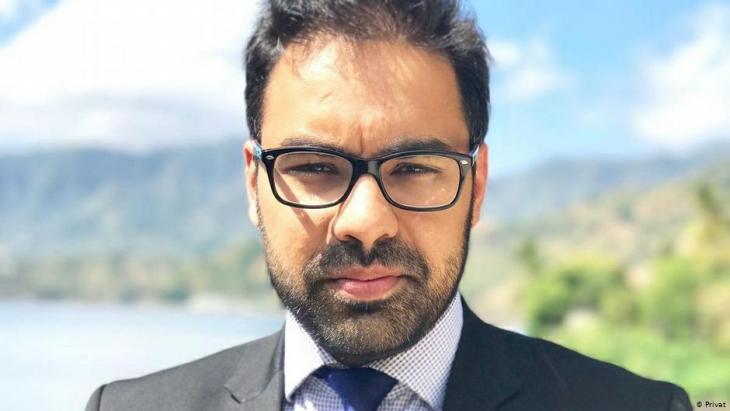 Asif Arif accuses the Macron administration of double standards: "The government is banning the Collective Against Islamophobia, which fights against the discrimination of Muslims. But it hasn't disbanded the far-right group Generation Identitaire, which clearly carries out illegal actions, such as checking migrants' papers on the Franco-Italian border two years ago"

You may also like: France, terrorism and identity politics – Emmanuel Macron's determination to pick the wrong battle

The proposed measures follow three recent terror attacks in France in which assailants killed a total of four people and severely injured two people in and around Paris and the southern city of Nice. The government has increased surveillance of about 50 Muslim associations and 75 mosques. France also intends to expel more than 200 non-citizens suspected of having been radicalised.

A bill that will be put before the French cabinet on Wednesday would increase surveillance of all mosques in France, as well as their financing, with the government also aiming to add more oversight to the training of imams. The draft law would also limit home-schooling, create new rules against online hate campaigns and permit imprisonment for intimidating public servants on religious grounds. The bill could reach Parliament in early 2021 and come into force a few months later.

Thakar and Ahamad are not opposed to surveillance of mosques and imams suspected of engaging in extremism. "It's in our interest to do something against these radical fanatics who have nothing to do with our vision of Islam," Ahamad said. "We also need to protect our own families against them."

No other Western poet was arguably so well-versed in the Koran or so fascinated by Islam as Germany's national hero, Goethe. In a new publication that examines all Goethe's ... END_OF_DOCUMENT_TOKEN_TO_BE_REPLACED

The disappearance of Razan Zeitouneh and her colleagues has been one of the greatest mysteries of the Syrian war – until today. DW's investigative unit hunted clues across six ... END_OF_DOCUMENT_TOKEN_TO_BE_REPLACED

Who’s financing, planning and commissioning terror attacks in Europe? This investigative documentary follows a trail that leads to Pakistan’s intelligence service, the ISI, which ... END_OF_DOCUMENT_TOKEN_TO_BE_REPLACED

The Libya Conference will be held in Berlin on 23 June. Much has been achieved since the last Libya Conference in Berlin in January 2020. The ceasefire is holding, there is a ... END_OF_DOCUMENT_TOKEN_TO_BE_REPLACED
Author:
Lisa Louis
Date:
Mail:
Send via mail

END_OF_DOCUMENT_TOKEN_TO_BE_REPLACED
Social media
and networks
Subscribe to our
newsletter