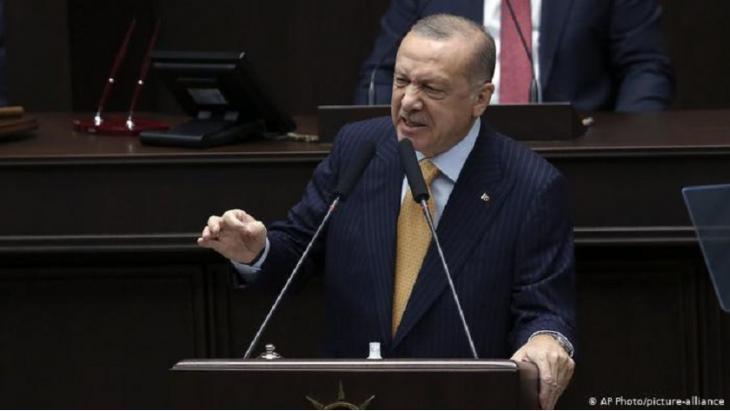 Turkey hits at 'Crusades' against Islam in cartoons row

Turkey’s president said on Wednesday that Western countries mocking Islam wanted to "relaunch the Crusades", heightening a confrontation with France over cartoons of the Prophet Muhammad that have stirred anger in Muslim-majority countries. Tuvan Gumrukcu and Ece Toksabay report

In a speech to lawmakers of his AK Party in parliament, President Tayyip Erdogan said that standing against attacks on the Prophet was "an issue of honour for us", suggesting Ankara may be digging in for a prolonged standoff.

The row with France flared after a French teacher who showed pupils cartoons of the Prophet published in the French satirical weekly Charlie Hebdo was beheaded in France this month. The caricatures are considered blasphemous by Muslims.

In a sign of spreading anger at France’s defence of the right to publish the cartoons, demonstrators denounced France in street protests in several Muslim-majority countries.

"France down, it insulted our Prophet," protesters shouted in the Somali capital Mogadishu.

Furthering Turkish anger, Charlie Hebdo published a cartoon on its cover showing Erdogan sitting in a white t-shirt and underpants, holding a canned drink and lifting the skirt of a woman wearing an Islamic hijab to reveal her naked bottom.

Turkish officials said Ankara would take legal and diplomatic steps in response to the caricature, calling it a "disgusting effort" to "spread its cultural racism and hatred".

The Turkish foreign ministry summoned the charge d’affaires at the French embassy over the magazine cover.

Erdogan said he had not seen the caricature "because I consider it wrong to even look at these immoral publications" and that his anger was over disrespect towards the Prophet rather than the "disgusting attack directed at me".

The West was "once again headed to a period of barbarity", he said, describing colonial powers as "murderers" for their record in Africa and the Middle East.

"They literally want to relaunch the Crusades. Since the Crusades, the seeds of evil and hatred have started falling on these (Muslim) lands and that’s when peace was disrupted."

The French government, backed by many citizens, saw the October 16 knife attack - in which a man of Chechen origin beheaded Samuel Paty, a teacher who had shown pupils cartoons of the Prophet in a civics lesson - as an attack on freedom of speech.

Turkish state media said Turkish prosecutors had launched an investigation into Charlie Hebdo’s executives. Turkey’s Communications Directorate said the battle against "these rude, ill-intentioned and insulting steps" would continue to the end.

Protests widen to Somalia and Mali

Erdogan sharply criticised Macron at the weekend, saying the French leader needed a mental health check, prompting France to recall its ambassador from Ankara. On Monday, Erdogan urged a boycott of French products.

France’s foreign ministry on Tuesday issued safety advice to French citizens in Indonesia, Turkey, Bangladesh, Iraq and Mauritania, advising them to exercise caution. They were told to stay away from any protests over the cartoons and avoid any public gatherings.

In Cairo, Egyptian President Abdul-Fattah al-Sisi said freedom of expression should stop if it offended more than 1.5 billion people.

The Grand Imam of Egypt’s al-Azhar university, one of the world’s most eminent seats of Sunni Muslim learning, urged the international community to criminalise "anti-Muslim" actions.

In the Somali capital Mogadishu, hundreds of mostly youthful demonstrators gathered at a busy junction leading to the airport, chanting anti-French slogans and burning French flags. They were responding to calls by clerics to come out and condemn France and boycott French products.

"We are going to use our muscles to defend Islam," a middle-aged man, Mohamed Ahmed, who was at the demonstration, told Reuters when asked why he was participating. "We ask people to burn every product of France they come across."

Dozens of Iranians gathered in protest in front of the French embassy in Tehran, state media reported. Some held up placards with red crosses plastered on images of French goods.

In Dhaka, hundreds of Bangladeshi Muslims took to the streets of the capital for a third consecutive day, chanting slogans such as "Boycott French products" and burning effigies of Macron, whom they described as an enemy of Islam.

At a much larger protest on Tuesday in Dhaka, thousands had turned out for a protest carrying banners such as "Stop Islamophobia", "Boycott France" and "Lay siege to the French Embassy in Dhaka".

Using a graphic novel to address a contentious issue like the Algerian war of independence may seem an odd choice, but new release "Algeriennes", translated into English by Ivanka ... END_OF_DOCUMENT_TOKEN_TO_BE_REPLACED

Although a unity government was formed in Libya in March 2021, tensions and possible crises between the political actors are already emerging. What problems does the country face ... END_OF_DOCUMENT_TOKEN_TO_BE_REPLACED

India hits record numbers of COVID-19 infections worldwide for the sixth day running, as health systems buckle under the pressure, and shortages of medical oxygen and hospital ... END_OF_DOCUMENT_TOKEN_TO_BE_REPLACED

On 7 March, Switzerland became the latest European country to vote in favour of a so-called "burka" ban. It was yet another feather in the cap of the right-wing populist Swiss ... END_OF_DOCUMENT_TOKEN_TO_BE_REPLACED

German Middle East analyst Guido Steinberg and television journalist Ulrich Tilgner have both published new books on the conflicts in the Middle East. Their analyses and their ... END_OF_DOCUMENT_TOKEN_TO_BE_REPLACED

In Grenoble, France, two professors have been pilloried in a dispute over the use – or otherwise – of the term Islamophobia. Is freedom of speech in jeopardy? By Stefan Dege and ... END_OF_DOCUMENT_TOKEN_TO_BE_REPLACED
Author:
Tuvan Gumrukcu & Ece Toksabay
Date:
Mail:
Send via mail

END_OF_DOCUMENT_TOKEN_TO_BE_REPLACED
Social media
and networks
Subscribe to our
newsletter