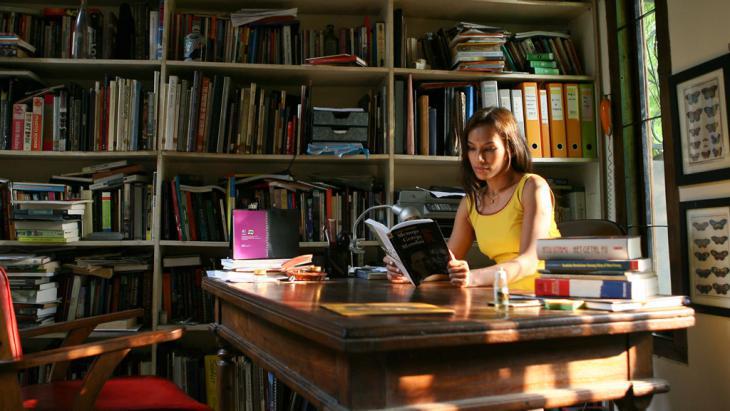 Indonesia is the guest country at the Frankfurt Book Fair this autumn. Just under 70 Indonesian authors will be in Frankfurt to give public readings. Qantara.de introduces seven of them. By Monika Griebeler

"I certainly don't live the way society expects," admits Ayu Utami, star of the Indonesian literary scene. She breaks with norms and expectations, both privately and in her books. Her first novel, "Saman", published in 1998, was a bestseller. More than 100,000 copies were sold in the space of a few months – in a country where even the major publishing houses seldom print more than 3,000 copies of a first edition.

In "Saman", Utami wrote openly about sex and resisting the ruling classes – an affront to some; a literary sensation to others. Three years later, she published the sequel, "Larung". This book was also a success. Since then, she has written more novels, screenplays and essays.

Utami, like many Indonesian authors, is actually a journalist. During the Suharto dictatorship, however, she was banned from working. Her books still deal with Indonesia's political history. "Everything about me is political: my writing, my work at Komunitas Salihara and my private life."

What Ayu Utami is to prose, Dorothea Rosa Herliany is to poetry: her poems are about the female body, sexuality and violence against women. In her writing, men often have to subordinate themselves to dominant women. A collection of her poems published in German is called "Schenk mir alles, was die Manner nicht besitzen" ("Give me everything that men don't own"). Her agenda, however, is not a feminist one. As she says, it's more about lending a voice to those who usually go unheard.

Indonesia has a long tradition of poetry and a lot of well-known poets, including Agus R. Sarjono, who among other things has translated seminal works by Bertolt Brecht, Johann Wolfgang von Goethe and Rainer Maria Rilke into Indonesian. Toeti Heraty is another poet who, like Herliany, takes a perceptive and intimate look at the role of women. The 81-year-old is one of Indonesia's original campaigners for women's rights.

Hers was a prominent voice in Indonesia's debate on the death penalty for drug dealers. "We Indonesians should be far too familiar with death to support a policy of execution," Laksmi Pamuntjak, the writer and poet, declared in "The Guardian". Following a military coup by General Suharto in 1965, the purge of (alleged) communists began. An estimated one million people died in the space of just a few months.

Pamuntjak's novel "The Question of Red" deals with the legacy of this era. While writing it, she realised that it was her duty to influence people's thinking about the massacre through her words. "I don't live in the assumption that a book can change the world. But it can reach individual people." 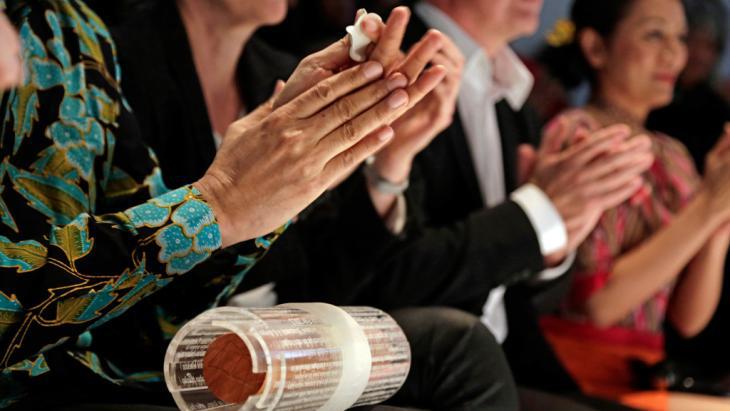 Out of the shadows and into the light: until now, Indonesia's authors have enjoyed limited global exposure. Nevertheless, this year's guest of honour at the Frankfurt Book Fair has much to offer in the way of literature. Indonesia's authors address numerous social taboos and are critical in their portrayal of the country's past

The massacre of communists is also one of Leila Chudori's themes. In 1965, Chudori was just three years old. As a journalist and author, she is still critical of how this chapter in the country's history is presented. "The government still hasn't really accepted what went on," she says. "It persists in denying or concealing what happened."

Her novel "Pulang" ("Home"), the Indonesian word for "homecoming", is intended to shake people up, highlighting what took place and tracing the consequences through to the present day. Chudori also works as a journalist for the news magazine "Tempo", as well as writing short stories and screenplays for TV and film.

Another woman – and a brave one at that. Long after her male colleagues had pulled out, Christanty was still engaged in research in Aceh, the Indonesian province where Sharia has been imposed. She writes about and against Islamists in a country where Islamisation is making creeping but persistent advances.

In the process she has produced, among other things, a volume of essays and reportage entitled "Don't write us down as terrorists". For her book, Christanty interviewed representatives of various religious, political and social groups, each of whom legitimised injustice and despotism in his or her own way.

Her first book was self-published – a present to herself on her 25th birthday. She subsequently publicised it in a Jakarta shopping mall. Some 40 days later, all 3,000 copies had been sold. These days, her Supernova books are more or less a permanent fixture on Indonesia's bestseller list. Lestari's novels are particularly popular with younger readers.

Five books in the planned eight-book series have been published so far. As well as writing several novels and short stories, the 39-year-old has risen to fame as a singer, releasing a solo album and film versions of her books. She is a well-known face at the Frankfurt Book Fair, having accepted the guest of honour invitation on behalf of Indonesia in 2014.

The first man on the list – and one of the most successful. His autobiographical novels "The Rainbow Troops" and "The Dreamer" have met with international acclaim. They are modern Indonesian fairy tales, at least in terms of the plot: a boy from a poor background makes it to university through hard work and a bit of luck. This may be a little lightweight for some critics, but readers love it.

Six women and one man; almost all of them journalists. Leave out the authors of "Islamic" novels with a pronouncedly Muslim religious flavour and this is typical of the modern Indonesian literary scene. Critical writers like the authors mentioned here are not a new phenomenon in Indonesia. Three earlier writers, all since deceased, had a particular impact. 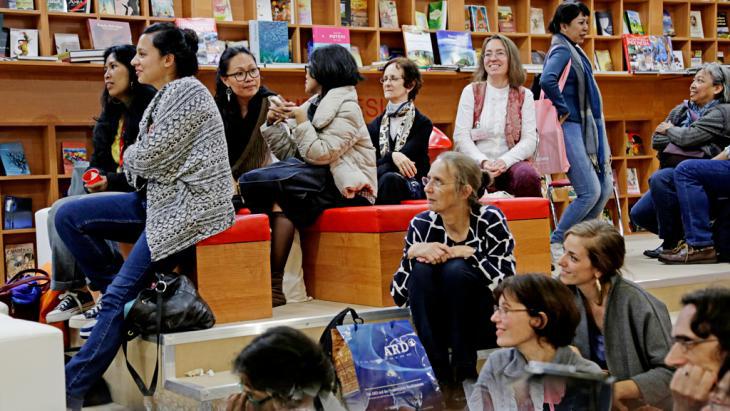 Were the Nobel Prize for Literature ever to have been awarded to an Indonesian, it would most likely have gone to him: though nominated for the prize several times, Pramoedya Ananta Toer never won it. Nevertheless, his works, which were translated into 37 languages, took the world by storm.

His was a turbulent existence, his life a constant battle. Imprisoned by the Dutch occupiers for "anti-colonial thought" and arrested by Sukarno over a book, Pramoedya was first imprisoned without trial by Suharto in 1965 for his links with the Communist Party and then banished to the notorious prison island of Buru.

It was there he penned his major work, the Buru Quartet: "This Earth of Mankind", "Child of All Nations", "Footsteps" and "House of Glass". The four books centre on a Javanese nobleman and journalist fighting against the Dutch colonial rulers. Pramoedya, too, consistently used his work to question state authority. As he commented shortly before his death, "I saw it as a kind of sport; they never brought me down."

In 1963, his book "Twilight in Jakarta" became the first Indonesian book to be translated into English. In his own country, however, publication only came later, as versions began to appear in other languages. These days, it is one of the great works of Indonesian literature. Lubis' life bears all the hallmarks of an Indonesian writer's biography: a journalist, he was incarcerated several times, only to fight on for his convictions as an author.

W.S. Rendra was the Renaissance man of the creative scene: poet, performer, playwright, actor and director. Critical of society, his works drew on Greek antiquity, Shakespeare and the German author Bertolt Brecht for inspiration. Seen as too controversial and too critical, they were frequently banned. Wherever Rendra's plays were performed, however, thousands came to see them. Though repeatedly jailed for his activities, he managed to breathe new life into Indonesian theatre.

Indeed, his dramas and poetry brought him international acclaim: like Pramoedya, Rendra was nominated for the Nobel Prize for Literature several times. He toured the world, meeting literary greats from other countries, such as the German Gunter Grass. His home during his last years, however, could not have been more Indonesian: a farm south of Jakarta. Here he created the "Bengkel" theatre collective, which continues to inspire many actors and artists to this day.

Water buffalo and oxen have been part of the work in Indonesian fields for centuries. But the draught animals are no strangers to sport either, as can be seen in two traditional ... END_OF_DOCUMENT_TOKEN_TO_BE_REPLACED

According to the latest Reuters tally, more than 2.54 million people are now reported to have been infected by the novel coronavirus globally and 177,004 have died. As Muslims ... END_OF_DOCUMENT_TOKEN_TO_BE_REPLACED

Around the Islamic world, lockdowns and curfews are being extended and religious ceremonies are being cancelled outright in the hope of slowing the spread of COVID-19. Here’s the ... END_OF_DOCUMENT_TOKEN_TO_BE_REPLACED

While some are beginning to protest the lockdown, others are unable to bury their loved ones in accordance with Islam. Here’s the latest from across the region END_OF_DOCUMENT_TOKEN_TO_BE_REPLACED

Coronavirus continues unabated. Iran remains a hub of infection, war-torn Syria has recorded its first case and Yemen is bracing itself for the worst. Here’s the latest from ... END_OF_DOCUMENT_TOKEN_TO_BE_REPLACED

As COVID-19 sweeps across the globe, it is forcing religions to adapt and take action to prevent infection. But experts warn against using the crisis to fuel conspiracy theories. ... END_OF_DOCUMENT_TOKEN_TO_BE_REPLACED

Comments for this article: Seven must-know authors from Indonesia

END_OF_DOCUMENT_TOKEN_TO_BE_REPLACED
Social media
and networks
Subscribe to our
newsletter