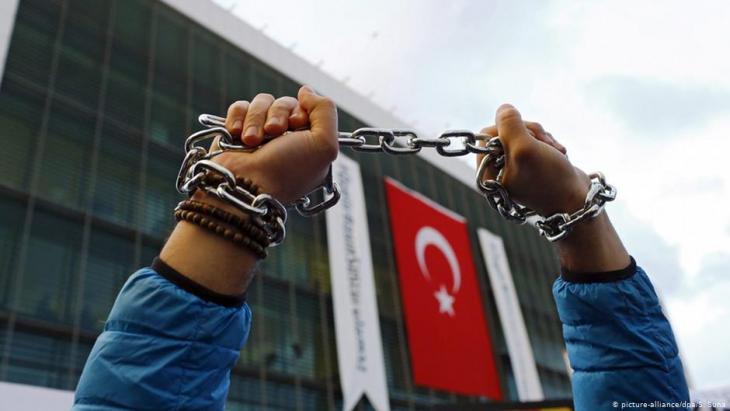 It was one of those moments that once again showed Turkish President Recep Tayyip Erdogan's seemingly limitless power. Two weeks ago, he was on a return flight from a state visit to Azerbaijan, accompanied representatives of the pro-government press, who asked him sympathetic questions.

One journalist criticised that OdaTV had not yet been charged, saying the media portal was after all one of the key initiators of the "coup attempt". What was meant were the Gezi protests in 2013, in which large parts of civil society demonstrated against the government. OdaTV is said to have described the actions of the state and the police relating to the unrest as "murderous".

Erdogan thanked the journalist for his assessment and said he would take care of it. "The ball is now in the court of justice," he said. A week later, the Turkish judiciary initiated investigations into OdaTV employees. Police arrested Editor-in-Chief Baris Pehlivan, news chief Baris Terkoglu and editor Hulya Kilinc. Access to the website was blocked.

The media outlet was charged with having reported about a Turkish intelligence officer who died in the war in Libya, and of having "revealed information and documents related to intelligence activities". This information, however, had previously been released by a member of the opposition Iyi party at a press conference in parliament. The Constitutional Court had ruled in a landmark decision in 2016 that information is not subject to secrecy if it was previously known to the public. 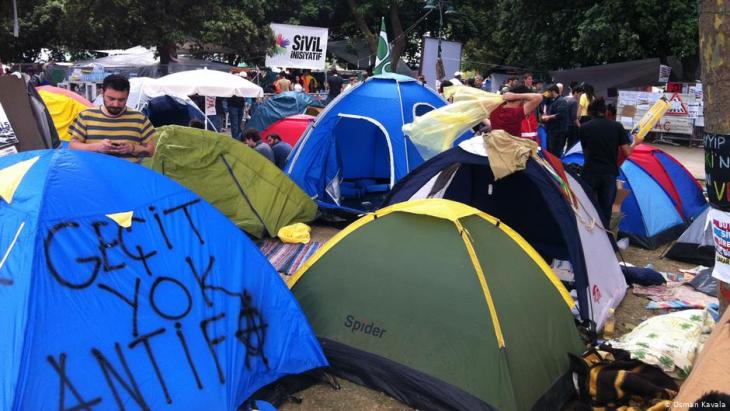 Denounced by pro-system media: one journalist criticised that OdaTV had not yet been charged, saying the media portal was after all one of the key initiators of the "coup attempt". What was meant were the Gezi protests in 2013, in which large parts of civil society demonstrated against the government

For many observers and social media users, this speedy move was further proof that a secret group close to Erdogan has infiltrated the judiciary. Suspicions have been growing for years that a faction known as the Pelican group is gaining increasing influence in Turkey and effectively operating as a state within the state. The name refers to "The Pelican Brief", a 1992 legal thriller novel by John Grisham that was later turned into a Hollywood blockbuster starring Denzel Washington and Julia Roberts.

The USA and NATO plan to withdraw from Afghanistan by September. The operation is risky, the outcome uncertain. Many Afghans fear civil war. The quake on the Hindu Kush will also ... END_OF_DOCUMENT_TOKEN_TO_BE_REPLACED

The neo-Ottomanism propagated by Erdogan has long been more than rhetoric and symbolic politics. This can be seen from recent developments in parts of northern Syria, where Turkey ... END_OF_DOCUMENT_TOKEN_TO_BE_REPLACED

Televised Turkish dramas are all the rage in the Middle East. A young Ottoman TV Empire has been expanding its soft power by harnessing regional dialects, Arabic names and viewers ... END_OF_DOCUMENT_TOKEN_TO_BE_REPLACED

Researchers agree that climate change alone cannot be blamed for the outbreak of war in Syria in 2011. However, neither can it be ignored as a reason this once blossoming country ... END_OF_DOCUMENT_TOKEN_TO_BE_REPLACED

The Sufi Trail is a long-distance hiking route from Istanbul to Konya that seeks to revive the ancient tracks used by foot pilgrims on their way to Mecca. Marian Brehmer spoke to ... END_OF_DOCUMENT_TOKEN_TO_BE_REPLACED
Author:
Hülya Schenk & Daniel Derya Bellut
Date:
Mail:
Send via mail

END_OF_DOCUMENT_TOKEN_TO_BE_REPLACED
Social media
and networks
Subscribe to our
newsletter