The Shadow of a Colonial Heritage

An Algerian plan to pass a law which would make it possible to bring French crimes from the colonial period before the courts has led to new tension in the already difficult relationship between France and Algeria. By Bernhard Schmid 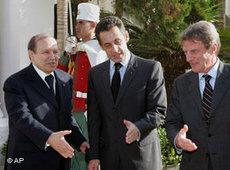 Strategic relations between France and Algeria are cooling: Abdelaziz Bouteflika insists that France must take responsibility for the crimes it committed during the colonial period before he's prepared to sign a friendship treaty

​​ One could see just how complicated relations between France and its former colony Algeria are during the regional elections in France which were held on March 14th and 21st.

The far-right Front National had adapted the "Stop" poster which had been used in Switzerland to whip up support for a vote in a referendum against the construction of minarets.

As in the Swiss original, the poster showed a veiled woman and a minaret shaped like a missile, but the French version also featured a silhouette of the French territory entirely covered with the colours of the Algerian flag and its star and crescent symbols.

All this was designed to support the view of the far right that immigration, especially from North Africa, is a kind of "invasion".

Several anti-racist organisations tried to stop the poster in the courts. And they were successful: one day before the polling stations opened, the poster was banned.

The row in France had an international dimension. The Algerian government lodged an official protest at the abuse of its national symbols. And the French foreign ministry felt the need to make a statement condemning this "unworthy" use of the Algerian flag.

The Front National leadership responded in its turn with energetic verbal attacks on this "foreign intervention" in French internal affairs. 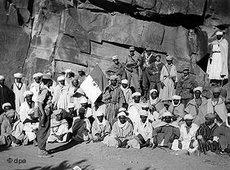 The war left a bloody legacy: decades after its independence, Algeria is still waiting for an official recognition of French guilt over the crimes of the colonial period

​​ The process of decolonisation was particularly difficult and conflict-laden in Algeria: the war of independence lasted from 1954 until 1962, and former European settlers in Algeria – the so-called "pieds noirs" or "blackfoots" – made up a powerful political lobby in France. All this has meant that racism against Algerians falls upon particularly fruitful ground.

The Algerians, for their part, are now threatening to bring French citizens who committed crimes during the colonial period before the courts.

At least, that's what Moussa Abdi, a member of parliament for the former Algerian state party, the FLN, would like to see. He introduced a bill to the National People's Assembly on January 13th to "criminalise colonialism." It's now supported by 125 of the 389 members of the assembly.

If such a law should be passed, special courts would be set up to pass judgement on those who held political or military responsibility on the side of the French colonial power.

Abdi is also trying to find allies in other former French colonies. A few months ago, Algerian deputies visited Vietnam, part of former French Indo-China, to win support there.

But why is Algeria trying so hard to gain acceptance right now for a policy of criminalising former French colonial crimes? One reason is certainly that Algeria feels badly treated.

For example, Algeria is still unhappy about a statement by the French interior minister, Brice Hortefeux, following the failed suicide bombing attempt by a 23-year-old Nigerian on a flight bound for Detroit last year.

Hortefeux revealed that, since April 2009, nationals from seven "risk countries" had been subject to stricter controls and searches at French airports. Among the countries, together with Afghanistan, Mali and Pakistan, was Algeria.

Algeria felt insulted, especially since Islamist terrorist activity in Algeria is now only at a fraction of the level it was at fifteen years ago.

Even if there are still occasional spectacular incidents in Algeria, radical Islamists lost the fight against the Algerian state in the course of a bloody civil war in the country between 1992 and 1999. 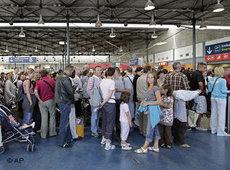 Under suspicion: Following the example of the US, France has put Algeria on a blacklist of countries linked to terrorism. Since then, Algerians travelling to France are subject to particularly tough controls

​​ The relationship between France and Algeria had already been strained by a French law on French colonial history, passed in February 2005. Article 4 required teachers and academics to emphasise "the positive role of the French presence abroad and especially in North Africa."

In early 2006, President Jacques Chirac had the law declared unconstitutional on the grounds that the state had no right to dictate the contents of the school curriculum. But the law had already caused considerable ill feeling in former French colonies in the Caribbean.

The law has not been forgotten in Algeria, where, according to various estimates, between 300,000 and one million people died in colonial wars. The bill currently going through the Algerian parliament can be seen as a belated response.

In addition, the fact that the right-wing government in Italy has moved farther than the French government, and has recognised its colonial crimes in Libya, is likely to be another reason for the Algerian move – even if Berlusconi only did so out of economic motives. The Italian prime minister, Silvio Berlusconi, officially recognised the crimes of his country in Libya during the colonial period in August 2008, and he repeated the declaration in June 2009.

The current tension between Algeria and France may also have something to do with the difficult economic relations between them. France continues to be the main supplier of consumer goods to Algeria, but it ceased to be Algeria's biggest export customer as long ago as 1990. France has thus given up its long-standing economic leadership in the country.

One reason is that France sees Algeria primarily as a source for raw materials and a market for its products – and not as a place for long-term investment. So now for Algeria, it's a post-colonial tit for tat.

Italian-Libyan Relations
Reconciliation with Ulterior Motives
Muammar al-Gaddafi has made an art out of embarrassing his European hosts in public, and he was certainly on form during his recent state visit to Italy, where he unsubtly reminded Italy of its colonial past as he stepped off the plane. Bernhard Schmid reports

END_OF_DOCUMENT_TOKEN_TO_BE_REPLACED
Social media
and networks
Subscribe to our
newsletter