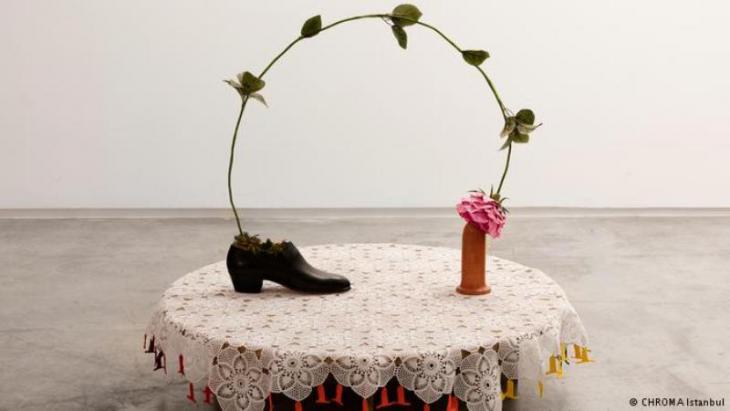 While heightened political tensions between Turkey and Europe grab the world's attention, an exhibition at Berlin's Schwules Museum refreshingly highlights the gay community's links to Istanbul. Report by Jan Tomes

Displaying 12 artists' works exploring the gay dialogue between Turkey and Germany, the exhibition "ğ – the soft g," on show at Berlin's Schwules Museum (Gay Museum) doesn't shy away from politics.

Regardless of the limited space – the museum dedicated one large room to the show – the exhibition provides insight into an otherwise hidden part of the Turkish cultural legacy.

"We used the letter ğ to describe the show because it's a hybrid letter that appeared in the Turkish alphabet in 1928, after the transition from the Perso-Arabic to the Latin alphabet," Emre Busse, co-curator of the exhibition, explains. "It's a metaphor for how Germans and people from other nations usually don't know how to articulate the sound, so they mispronounce our names. We see a gay possibility in this act that gives us a new identity," he adds.

Like Emre Busse, most of the participating artists were born in Turkey but later settled in Germany. Born in Istanbul, Busse graduated from Bauhaus University in Weimar two years ago. He then moved to Berlin, where he started working as a filmmaker and curator.

The exhibition also presents artworks by a Kurdish, a Singaporean and a Dutch artist.

The large hazel eyes of the famous drag character Fatma Souad, framed with fake lashes and arched, sharply defined eyebrows, steal the attention as she smiles from her portrait by artist Cihangir Gumusturkmen, posing stiffly in a campy ensemble of a red dress and a golden necklace. 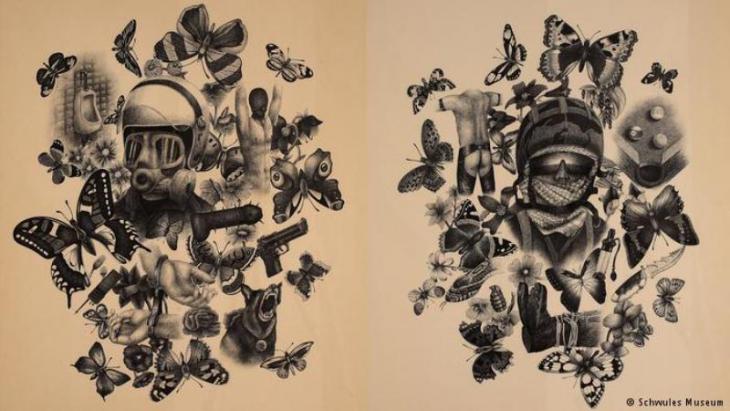 Not so sweet memories: despite general opinion, Erinc Seymen sees many similarities between sadomasochist practices and state oppression. The evolving patterns of his drawings stage a landscape where pain becomes pleasure (and vice versa) and where viewers experience both the arousing atmosphere of the clubs near Berlin's Nollendorfplatz and the shocking display of resistance against the state

While the exhibition focuses in large part on sexuality and eroticism, there are also pieces of a private, intimate nature, such as Ming Wong's sound installation about his music teacher's personal story.

As Busse admitted, it wouldn't be easy for him to stage an exhibition where a leather sling stands next to abstract photos of sweaty floors in Turkey right now.

"There is no official policy against the LBGT community, but the pride parade was cancelled last year. The authorities said the date overlapped with Ramadan, that it wasn't appropriate to show sexuality during the holy months. I wonder what will happen in years to come," Busse said. "These days, many of my gay friends are leaving Turkey. State abuse is getting harsher, but at least it's finally visible," he said, hinting that any apparent departure from heteronormativity is still punished in his home country.

Questioned about Turkish politicians coming to Europe to campaign in the run-up to Turkey's referendum, Busse remarks: "Freedom of speech is one thing, but I believe there is a certain rise of fascism that needs to stop. We can see that democracy isn't working in Turkey anymore, which is why I have lost hope in the elections," he said. "What's happening right now – not only in Turkey, but also in Germany and other countries, is that right-wing extremism is rising every day."

"This chaotic atmosphere doesn't allow people – gay or not – to concentrate on their lives. You have to survive first, but if this strategy becomes your life, living becomes quite exhausting."

Even in times of war and pandemic, refugees are still being deported to Afghanistan. Several deportation flights have taken place in recent weeks alone. Since those affected often ... END_OF_DOCUMENT_TOKEN_TO_BE_REPLACED

The USA and NATO plan to withdraw from Afghanistan by September. The operation is risky, the outcome uncertain. Many Afghans fear civil war. The quake on the Hindu Kush will also ... END_OF_DOCUMENT_TOKEN_TO_BE_REPLACED

German Middle East analyst Guido Steinberg and television journalist Ulrich Tilgner have both published new books on the conflicts in the Middle East. Their analyses and their ... END_OF_DOCUMENT_TOKEN_TO_BE_REPLACED

On 7 March, Switzerland became the latest European country to vote in favour of a so-called "burka" ban. It was yet another feather in the cap of the right-wing populist Swiss ... END_OF_DOCUMENT_TOKEN_TO_BE_REPLACED

Syrian-born Rafik Schami is a gifted storyteller and one of the most successful authors writing in German today. In his 50 years in exile in Germany, he has introduced the Arab ... END_OF_DOCUMENT_TOKEN_TO_BE_REPLACED
Author:
Jan Tomes
Date:
Mail:
Send via mail

END_OF_DOCUMENT_TOKEN_TO_BE_REPLACED
Social media
and networks
Subscribe to our
newsletter