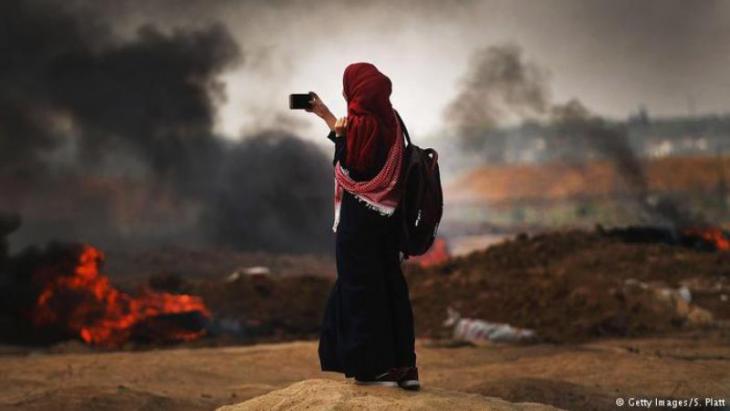 For several days, major rioting at the ongoing campaign of protests by Palestinians overshadowed celebratory events in Israel marking the 70th anniversary of the state's foundation. As a result of the deadly clashes, there have been increasingly vociferous calls around the world for an independent inquiry. By Inge Günther

It was the eighth time that tens of thousands of Palestinians attempted to storm border barricades patrolled by Israeli snipers as part of a mass mobilisation called the Great March of Return. On each and every occasion thus far, demonstrators have paid for this desperate attempt to breach the security fence with human life. But this particular day, 14 May – the eve of the Palestinian Nakba commemoration, the "catastrophe" of flight and displacement – ended in a tragedy dubbed "Bloody Monday" by the media with more than 60 dead and more than 1,500 others injured. It is a horrendous tally that gives rise to critical questions for both Israel and the Hamas government in Gaza.

The protests began as a Palestinian civil society initiative. A 25-year-old Palestinian living in the Rafah refugee camp first had the idea of conducting peaceful protests along the security fence between Gaza and Israel. The idea quickly caught on among the populace, with equivalent levels of support across almost all political factions.

But the Hamas leadership in Gaza immediately wrested control of the organisation of the protests, setting up assembly points – which it called "return camps" – and issuing directives. On the Monday in question, it closed schools across Gaza in a bid to boost levels of participation. The aim was to counter the celebratory mood in Israel at the opening of the US Embassy in Jerusalem with the full force of pent-up Palestinian rage at this provocation. 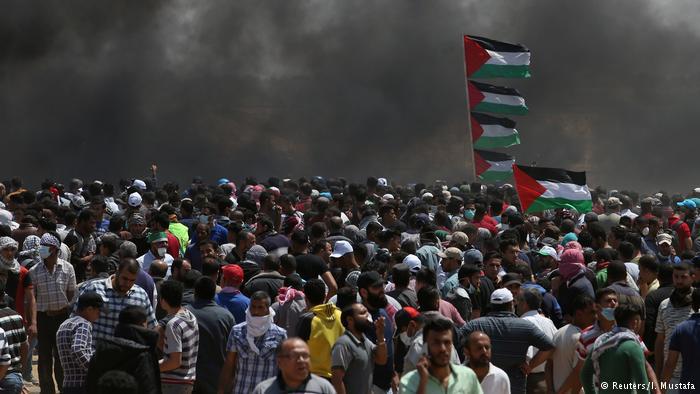 One event that triggered the escalation in violence at the Gaza–Israel border was the opening on Monday, 14 May of the US Embassy in Jerusalem on the day of the 70th anniversary of the founding of the state of Israel. Palestinians also protested against over ten year's of coastal blockades by Israel and Egypt. According to the Israeli Defence Force, about 40,000 people took part in the demonstrations

Not that young people of Gaza were forced to follow the call to mass protests. They are members of a "no future" generation, trapped inside the sealed-off Gaza Strip, frequently referred to as the world's largest open-air prison. Their urge to break out is correspondingly high. But to urge them to storm a border fence patrolled by rows of snipers behind raised walls of sand, while armed with nothing but slingshots and homemade Molotov cocktails is a cynical move.

Even in Gaza, where any criticism of Hamas is usually uttered in hushed tones, there was outrage. A courageous Palestinian journalist there confronted one member of its leadership team, Salah Bardawil, asking whether Hamas wasn't actually pursuing its own goals to the detriment of the people. Bardawil's response was that of the 60 casualties, 50 had been Hamas activists.

Israeli Prime Minister Benjamin Netanyahu quickly pounced on this statement, claiming this was proof that the dead were members of a terrorist organisation. According to Netanyahu, some had also been carrying knives "to slaughter Jews". He continued: "We are defending our families."

But there is little to suggest that Israeli soldiers faced any real threat to their lives during the protests. The army documented one case in which an armed Palestinian fired on a border post on 14 May. But according to eyewitness reports from Gaza, many demonstrators were hit by live ammunition far away from the security fence. An Israeli military spokesman countered with the accusation that Hamas had actively sought the highest number of casualties possible. 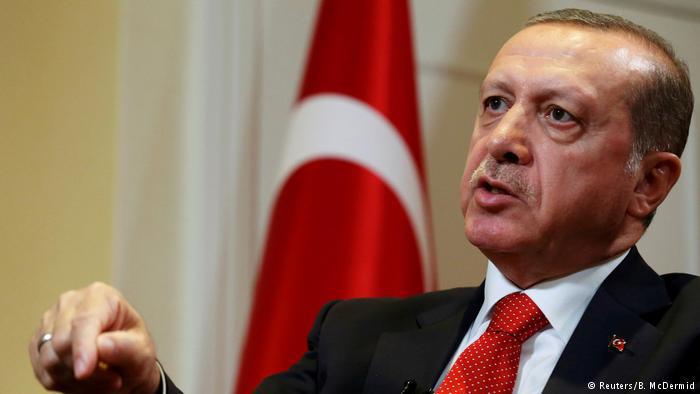 Fierce criticism from Ankara: addressing a group of Turkish students in London after the deadly clashes, Turkish President Recep Tayip Erdogan called Israel a "terrorist state" and accused Israel of "genocide", adding "I condemn this humanitarian drama, the genocide, from whichever side it comes, Israel or America." He declared three days of mourning for the Palestinians killed and recalled Turkey's ambassadors from Israel and the US

Calls for an independent inquiry

If these mutual recriminations can be cleared up at all, then only by an independent inquiry sought by the international community. Israel has rejected such an inquiry. Nevertheless, it felt diplomatic pressure in other forms. Outraged at the massive deployment of snipers, South Africa and Turkey recalled their ambassadors from Tel Aviv. Prime Minister Netanyahu responded by saying he didn't need to receive lectures on morality from Recep Tayyip Erdogan, whom he described as the "biggest supporter of Hamas". The EU also issued warnings to the government in Jerusalem to respect the principle of proportionality.

Resorting to live ammunition to repel a mass storming of the security fence also triggered febrile debate in Israel. In such a case, said one commentator, giving the order to just aim at the feet or legs almost inevitably means hazarding deaths. Haaretz journalist Amos Harel placed the blame squarely on politicians who "did virtually nothing" to prevent the predicted escalation. After all, he wrote, there have for a long time been warnings that the "Gaza powder keg" – afflicted by joblessness and a lack of prospects – would at some point explode.

Following "Black Monday", Hamas did dismantle the half a dozen protest camps set up several hundred metres from the Israeli security fence. It was urged to do so first and foremost by Egypt, which played a key role in brokering the now failed reconciliation agreement between the Islamists in Gaza and rival Fatah in the West Bank. Cairo, which maintains close relations with Israel over security matters, is again assuming a decisive role in attempts to gain control of the situation. 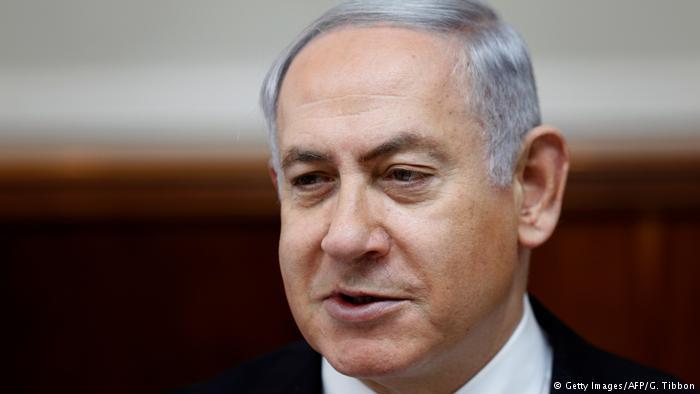 Speaking on 14 May, Israeli PM Benjamin Netanyahu defended Israeli security forces for their actions during clashes along the border with the Gaza Strip: "Every country has the obligation to protect its borders," Netanyahu said. "The Hamas terrorist organisation declares its intentions to destroy Israel and sends thousands to break through the border fence for that purpose. We will continue to act with determination to defend our sovereignty and our citizens."

In this endeavour, Egypt last week opened the largely-closed border-crossing between Gaza and Egypt and raised the prospect of opening it for a period of ten days every month. Israel too allowed a considerable volume of goods to pass through to Gaza via the border post Kerem Shalom, which was demolished in the unrest.

While that certainly relieves some of the pressure, it is not in itself enough to give Gaza any meaningful prospects for the future. There is great scepticism whether the incentive of economic alleviations will induce Hamas to successively disarm its military wing.

Israel is in any case convinced that the only way to deal with Hamas is with military force. In a message conveyed by Egypt, it informed the Hamas government that its senior members would be placed on the hit-list if they did not make efforts to deescalate the situation.

The protests in the Gaza border area have since subsided from their peak level on 14 May. But it being the fasting month of Ramadan, they could very well flare up again. The organisers have in any case announced plans to continue at least until Naksa Day on 5 June, which commemorates the Six-Day War of 1967 and the start of the occupation of Palestinian-populated areas.

German Middle East analyst Guido Steinberg and television journalist Ulrich Tilgner have both published new books on the conflicts in the Middle East. Their analyses and their ... END_OF_DOCUMENT_TOKEN_TO_BE_REPLACED

In his latest documentary, "The First 54 Years", Israeli director Avi Mograbi demonstrates how catastrophic and traumatising the occupation has been, not only for Palestinians, ... END_OF_DOCUMENT_TOKEN_TO_BE_REPLACED

"The Memory Monster" was a success for Israeli author Yishai Sarid. His latest book hasn't been published in English yet, but given his reach among Anglophone readers, it won't be ... END_OF_DOCUMENT_TOKEN_TO_BE_REPLACED

FIT TLV is the latest initiative by Tel Aviv’s youth to keep on partying during the coronavirus crisis. FIT describe themselves as "Free. Individuals. Together" – cycling, ... END_OF_DOCUMENT_TOKEN_TO_BE_REPLACED

In 2012, fed up with people expressing clear-cut opinions on the rights and wrongs of the Middle East conflict, Canadian conflict researcher and long-time Israeli resident Corey ... END_OF_DOCUMENT_TOKEN_TO_BE_REPLACED

The Islamic Republic of Iran has been subject to sanctions ever since its creation in 1979. The more the regime has entrenched itself and expanded its power in the region, the ... END_OF_DOCUMENT_TOKEN_TO_BE_REPLACED
Author:
Inge Günther
Date:
Mail:
Send via mail

END_OF_DOCUMENT_TOKEN_TO_BE_REPLACED
Social media
and networks
Subscribe to our
newsletter