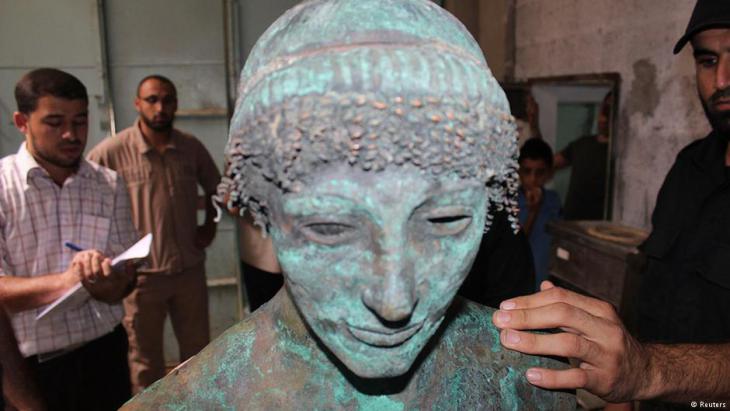 As well as giving the nod to the reckless redevelopment of ancient historical sites, Hamas and its de-facto government have also been fingered in the disappearance of countless archaeological finds. Gazan activists, archaeologists and historians are now fighting to protect what remains of their Palestinian heritage. By Abdalhadi Alijla

On a summerʹs day, when I started secondary school in Gaza, my father told me a story. The story goes, when Israel occupied Egyptian Sinai, they brought a huge drill with hundreds of stones that had ancient Hebrew calligraphy on them. They dag and buried them secretly in the desert. "They did that so the next generations will find them and say that this land belongs to Israel," he explained.

Being a teenager, I barely listened. Even though I could not verify my dad's story, I do have oral evidence from security officers in Gaza who worked in this field from 1994 until 2007. They claim that Israel, in collaboration with Palestinians, used to seize and steal Gaza's antiquities.

I have seen the Taliban destroying Bamiyan Buddhas, I have witnessed the time when IS destroyed Palmyra, I have seen the looting and destruction of Iraqi antiquities and cried in front of Ishtar's gate in Berlin, but never did I expect to witness the elimination of one of the most ancient Canaanite cities at the hands of Palestinians.

The first documented human settlements in the Gaza Strip date back to 6000 years ago. This part of the world has been part of the Iron, Bronze, Stone, Roman, Byzantine, Islamic, Ottoman and Modern ages, it has been under endless attacks that have targeted its antiquities and tangible heritage.

These attacks were not limited to the Israeli occupation, which established a systematic campaign to strip Gaza of its heritage. For instance, as head of the Israeli army, Moshe Dayan stole hundreds of antiquities from the Gaza Strip and Sinai. Archaeologists denounced Dayan's unethical and criminal behaviour, which ultimately led to a diplomatic crisis between Egypt and Israel.

In 2015, after much work, the Saada foundation in Lebanon was able to buy (and restore to the Middle East) dozens of Palestinian antiquities that Moshe Dayan had sent as gifts to his friends in Europe and North America.

However, the Israeli authorities are not the only ones who have been involved in the destruction, smuggling and embezzlement of the Palestinian heritage.

Hamas continues where the Israelis left off

Most recently, the Hamas de-facto government and its members destroyed Tal al-Sakan, a 4,500 year-old site. Tal al-Sakan is just one of the many examples of endangered Palestinian archaeological sites.

In 2015 and as a result of Hamas' financial crisis, the de facto government decided to allocate land as a reward for its employees. The land in question was publicly owned. In other words, they provided loyal members with shares of land in a move that confirms malfeasance and nepotism on the part of the rulers of the Gaza Strip.

High-ranking employees preferred land located in a south Gazan suburb considered an extension of Gaza city, or in ʹnew Gazaʹ, where four main universities have built new campuses. In this area land prices are high.

The land granted was Tal Al Sakan, one of the most ancient sites in Gaza. Palestinian, French and Swedish archaeologists discovered the site in 1998 and believed it to be a rare 4,500 year-old Bronze Age settlement and later a Canaanite city that would explain the links between ancient Egypt and the Levantine region.

Home
Print
Newsletter
More on this topic
Trump's Jerusalem decision: Unleashing a new wave of radicalisation?Palestine and its Arabic neighbours: Gaza – a city no one wantsPalestinian territories: From self-determination to dictatorship - With a rod of ironMohammad Sabaaneh′s "White and Black: Political Cartoons from Palestine" : Punching through the glass
Related Topics
Antiquities and historical monuments, Fatah, Hamas, History of the Near and Middle East, Israeli-Palestinian conflict, Mahmoud Abbas, Middle East peace process, Palestinian Authority, U.S. policy in the Middle East
All Topics

Hamas in Gaza, the Palestinian Authority in the West Bank, and Israel: Palestinians have fewer and fewer rights, says Khaled Elgindy. The Middle East could escalate at any time. ... END_OF_DOCUMENT_TOKEN_TO_BE_REPLACED

Joe Biden promised to make democracy and human rights central to US foreign policy. But that means not insisting on Israel's right to defend itself without mentioning its ... END_OF_DOCUMENT_TOKEN_TO_BE_REPLACED

As the Biden administration attempts to promote democracy and human rights in the Middle East, it will confront the deep-seated belief among Arabs that U.S. policies are unfair to ... END_OF_DOCUMENT_TOKEN_TO_BE_REPLACED

Ben Aylon’s debut international album sees him elevate the traditional music and instruments of Senegal and Mali into a fresh contemporary setting. Seven years in the making, " ... END_OF_DOCUMENT_TOKEN_TO_BE_REPLACED

Years ago, the International Holocaust Remembrance Alliance formulated how hatred of Jews can be recognised. Now a new definition is causing controversy. By Sarah Judith Hofmann END_OF_DOCUMENT_TOKEN_TO_BE_REPLACED

When it comes to talent, Palestine may well be able to compete with other football teams in the region, but growth and development are hampered by the situation in the Palestinian ... END_OF_DOCUMENT_TOKEN_TO_BE_REPLACED
Author:
Abdalhadi Alijla
Date:
Mail:
Send via mail

END_OF_DOCUMENT_TOKEN_TO_BE_REPLACED
Social media
and networks
Subscribe to our
newsletter