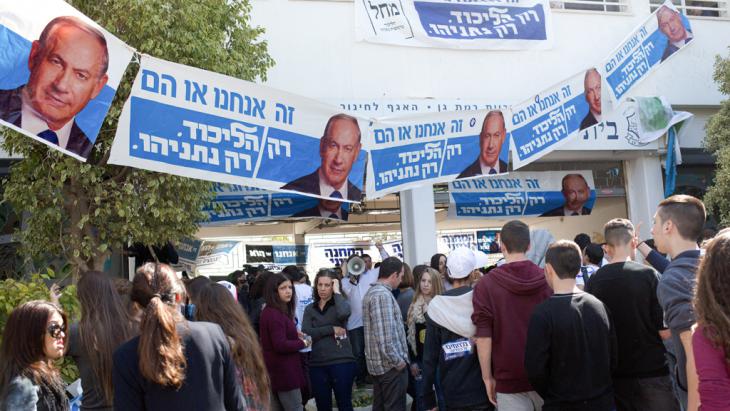 General election in Israel
Elections for nothing

Never before in the history of Israel have there been such empty and unnecessary elections. The elections of 2015 are about nothing; no real issues are being discussed. Most of the parties are not even bothering to present an agenda, and very few Israelis understand why they have to go to the polls on 17 March, two years after they last did so. By Gideon Levy

Nobody knows what brought the Israeli prime minister, Benjamin Netanyahu, to fire some of his colleagues in the coalition government and to declare new elections a few months ago. Nobody understood it then and nobody understands it now. The real motive for this enigmatic step remains unknown.

Some would say that Netanyahu did so after he failed to disqualify a bill that aimed to damage and limit the scope of a private newspaper, "Israel Hayom", which is owned by Netanyahu's biggest patron, the American billionaire and casino magnate Sheldon Adelson. Nobody has offered a better explanation, but the very thought that Israel is holding elections because of a free newspaper is strange, to say the least.

But the elections are now a fait accompli; they will take place in a matter of days, and the campaign of all the participating parties is now at its peak. Any foreigner coming to Israel will find it hard to understand what it is all about, and even harder to believe it. The question of what happened to the money for the recycled bottles, which the prime minister's wife, Mrs Sara Netanyahu, collected at the official residence and unlawfully put in her own pocket, is by far a bigger issue in this campaign than the continuation of the occupation, the possibility of finding alternative solutions to the conflict with the Palestinians, or even last summer's war in Gaza.

Half a year ago, Israel launched another bloody military operation against Gaza. Over 2,000 Palestinians were killed, 150,000 are still homeless, and Israel achieved nothing in terms of strategic goals. The military operation cost Israel 9 billion shekels; the damage to its economy was evaluated at 10–12 billion shekels. The reconstruction of Gaza, which has barely started, will take another 100 years according to Oxfam, if it proceeds at the present speed.  There is no discussion about the price of this unnecessary war, no debate about crimes of war, and the price that Israel will pay one day for its actions, and no talk about how to prevent the next war in Gaza, which is surely not far away. 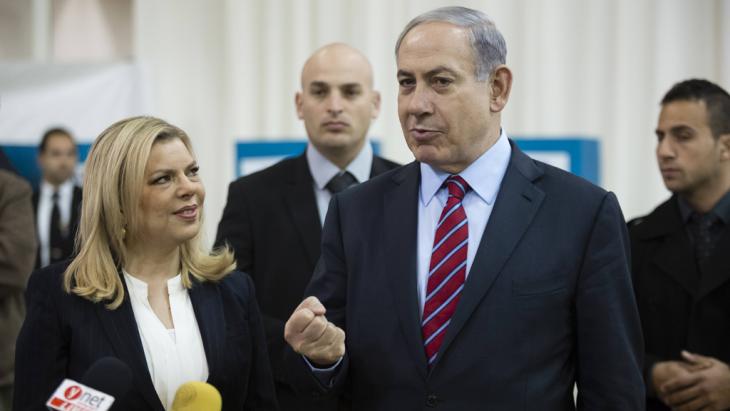 According to Gideon Levy, the personality and behaviour of Benjamin Netanyahu and his wife are attracting more attention and are being discussed in more detail in this election campaign than any of the major issues affecting not only Israel but the Middle East, such as "the continuation of the occupation, the possibility of finding alternative solutions to the conflict with the Palestinians, or even last summer's war in Gaza"

Occupation: the elephant in the room

But the absence of the traumatic war from the political agenda in Israel should not surprise anyone. The Israeli discourse excludes many major fatal issues, not only in times of elections. A state without definite and recognised borders, which has never dealt with some of the main issues that will shape its future; a society that still doesn't know where is it heading and what character it will have in the future is living in denial and is hardly dealing with the core issues. Questions like the future borders of Israel in case of a settlement with the Palestinians, a two-state solution or a one-state solution, the relation between religion and the state, or the future of the Palestinian minority within Israel, all these and many other issues are hardly being discussed in this campaign.

The major issue that is being discussed is the personality and the behaviour of Benjamin Netanyahu, mainly in his private life, and some very few economic and social questions, such as housing prices and the cost of living in general.  These issues are presented as if they are totally disconnected from the major issues, like the monstrous military budget of Israel, the endless subsidies for the settlement project, and the price that Israel is starting to pay abroad for its insistence on continuing the occupation, in terms of boycott, sanctions and diplomatic isolation. In other words, even if some economic and social questions are being discussed in this campaign, the wider context is absent, which makes the whole discourse an artificial and false one.

There is a big elephant in the room and nobody talks about it. Everybody pretends it isn't there. The elephant is obviously the occupation, the key factor for almost any aspect in Israeli life, but in the eyes of most Israelis, if you don't talk about this elephant, then it doesn't exist. This unbelievable phenomenon of a society which lives in such a denial, even in times of great emotion like on the eve of the coming elections, is the outcome of years of living in denial and of systematic brainwashing, mainly in the Israeli media, which has succeeded in making these issues disappear in the consciousness of most Israelis. 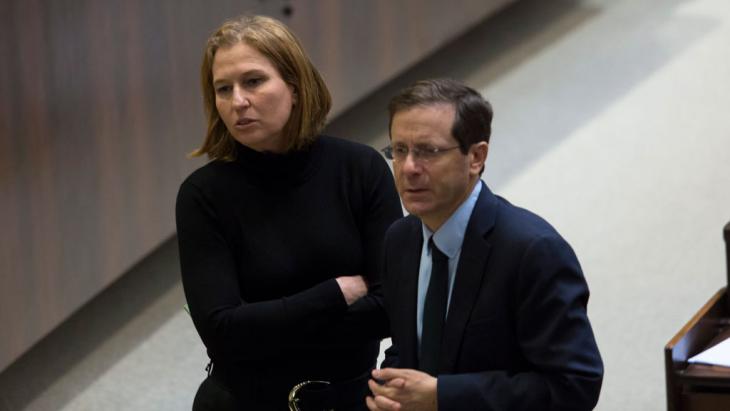 Labor party leader Isaac Herzog (right) and Tzipi Livni. "Herzog and Livni have not suggested any kind of courageous plan, only to continue the negotiations [...]. Herzog says he will need another five years of talks with the Palestinians, which is just another way of saying that he, like Netanyahu, has no real intention of taking any kind of significant steps," writes Gideon Levy

Two weeks before the elections and the outcome is not very clear. Likud under Netanyahu and the Zionist Camp under Isaac Herzog and Tzipi Livni are almost at a tie in the polls. Neither of them will get a decisive majority, which means that whoever will be the candidate for prime minister will have to create a majority coalition made up of many medium-sized and small parties. This guarantees instability but above all raises the question as to whether there is really a major difference between the main candidates for prime minister, when it comes to the main issue of putting an end to the Israeli occupation of the West Bank and Gaza.

Herzog and Livni have not suggested any kind of courageous plan, only to continue the negotiations – what may be the longest peace process in history. Herzog says he will need another five years of talks with the Palestinians, which is just another way of saying that he, like Netanyahu, has no real intention of taking any kind of significant steps.

Most of the world is waiting for Netanyahu to step down and will applaud when Herzog enters the prime minister's office, but this will not necessarily be a positive development for those who genuinely want to see justice in the Middle East. As it seems now, the main intention of Israel, whether it will be led by Netanyahu or by Herzog after these elections, is to maintain the status quo, and the status quo means continuing the unacceptable reality in which one people governs another in a very brutal way, the way it has been for nearly fifty years, without any intentions of putting an end to it. The twentieth Knesset will be elected in the coming days, a new government will be formed a few weeks later, but no new message will come out of Israel.

Home
Print
Newsletter
More on this topic
Investigations into the 2014 Israel–Gaza conflict: What prospects for accountability in Gaza?Arabs and Jews in Israel: You can't tear us apartThe Knesset member Haneen Zoabi: Loathed, reviled ... and excluded from parliamentInterview with Yehuda Shaul: "The treatment of the Palestinians is the biggest threat to Israel"
Related Topics
Israeli-Palestinian conflict, Israeli-Palestinian dialogue, Middle East peace process, U.S. policy in the Middle East
All Topics

In Nathan Englander's novel "kaddish.com", a Jewish man is plagued by feelings of guilt and regret for disregarding the rules of the Kaddish (prayer for the dead) for his deceased ... END_OF_DOCUMENT_TOKEN_TO_BE_REPLACED

Russia is leaving no stone unturned in its attempts to make the Islamic Republic an ally in the war against Ukraine. Fortunately for Vladimir Putin, the mullahs in Tehran are ... END_OF_DOCUMENT_TOKEN_TO_BE_REPLACED

It is possible to write about the Holocaust and the crimes of colonial powers without downplaying anything. In her latest book, Charlotte Wiedemann focuses on the numerous blind ... END_OF_DOCUMENT_TOKEN_TO_BE_REPLACED

The Palestinian militant organisation Hamas, with Hezbollah's help, is building up a military presence in Lebanon, the ultimate consequences of which could be devastating, writes ... END_OF_DOCUMENT_TOKEN_TO_BE_REPLACED

With his fist bump greeting for a man he previously called a pariah, US President Biden has paved the way for Saudi Crown Prince Mohammed bin Salman's return to the international ... END_OF_DOCUMENT_TOKEN_TO_BE_REPLACED

Asked about the Shoah, Palestinians often bring up the Nakba, the displacement of Palestinians associated with the founding of the state of Israel. An Israeli Holocaust researcher ... END_OF_DOCUMENT_TOKEN_TO_BE_REPLACED
Author:
Gideon Levy
Date:
Mail:
Send via mail

END_OF_DOCUMENT_TOKEN_TO_BE_REPLACED
Social media
and networks
Subscribe to our
newsletter