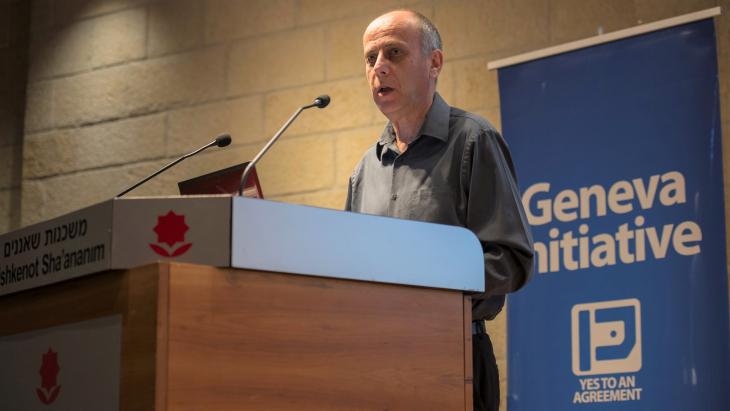 A two-state solution to the Israeli-Palestinian conflict has practically disappeared from the international agenda. Israel’s unity government has decided against negotiations and Palestinian politics are stuck in deep stagnation. Yet some are working tirelessly to change that. Noam Yatsiv talks to Gadi Baltiansky of the Geneva Initiative

In 2003, a detailed draft for a two-state solution (2SS) agreement between Israel and the PLO was presented by senior negotiators in Geneva. Today, the Tel-Aviv-based Geneva Initiative (GI) and Ramallah-based Palestinian Peace Coalition still work to influence policy towards a deal along those lines. One can safely assume that both NGOs never intended to exist this long. Several rounds of talks have failed since their founding and negotiations are at an eight-year impasse with no end in sight.

Realities on the ground, however, have been anything but static. In 2005, Israel unilaterally evacuated its settlers from the Gaza Strip. Two years later, Hamas took over the territory from the PA, with this political schism still in place. Settlements keep mushrooming across the West Bank and settler associations have gained a foothold in several East Jerusalem neighbourhoods. On Jerusalem's Temple Mount, radicals are slowly chipping away at the fragile status quo.

A decade ago, GI director Gadi Baltiansky described settlements as a "removable obstacle" and stated that "the only way to predict the future is to shape it". While the 2SS is still warmly endorsed by all major actors in the international community, growing scepticism over its feasibility leads many activists and thinkers to suggest alternative visions.

Mr Baltiansky, ten years on, the number of West Bank settlers has grown from 325,000 to nearly 500,000. It seems like your camp is failing to shape the future. Are settlements still "removable"?

Gadi Baltiansky: Any plausible agreement based on the 1967 lines will include 1:1 land swaps that will annex at least 80% of the settlers into Israel. Evacuating the rest won’t be simple, but is doable. Bigger historical precedents exist. For hardline ideological settlers, the soil’s sanctity is indeed more important than the state’s existence, but their actual power is much smaller than perceived. At the end of the day, for a huge majority of Israelis, the Gaza withdrawal wasn’t a national trauma, period. Today practically nobody, even on the right, talks about a return to Gaza. 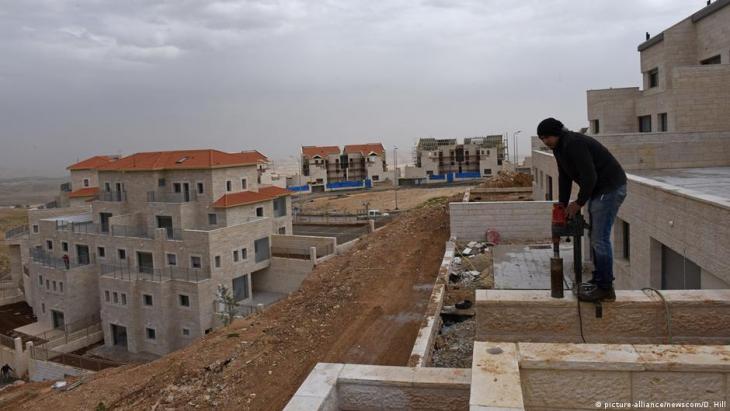 Settlements a removable obstacle? "Any plausible agreement based on the 1967 lines will include 1:1 land swaps that will annex at least 80% of the settlers into Israel. Evacuating the rest won’t be simple, but is doable," says Geneva Initiative Director Gadi Baltiansky. "For hardline ideological settlers, the soil’s sanctity is indeed more important than the state’s existence, but their actual power is much smaller than perceived. Ultimately, the number of settlers who would violently resist is minor. Should 9 million Israelis let some 10,000 dictate their future?"

But these are vastly different figures. We’re talking about a number about 20 times higher than the 9,000 Israelis who were pulled out in 2005.

Baltiansky: That’s true. But ultimately, the number of settlers who would violently resist is minor. Let’s assume there are 10,000 violent extremists – that’s a generous assessment. Should 9 million Israelis let these 10,000 dictate their future? That doesn’t make sense to me.

The bigger obstacle to peace is the risk that leaders must take confronting rejectionists. It’s a national and political risk, but also a personal one. We all know what happened to Rabin and to Saadat.

A 2SS is still doable with courageous leadership. If reached, it would take several years to fully implement, leaving the hardest parts to its final stages. It won’t take a week like evacuating Gaza did. A large majority of to-be relocated settlers are employed within Israel anyway, so their absorption shouldn’t be that difficult. Once a process with Palestinian and global co-operation takes off relatively smoothly, the minority who still plan to resist eviction would have far less public support. They would be seen as struggling against a success story for Israel – a peace agreement. Those who struggled against the Gaza withdrawal were doing so against a unilateral move, not a peace agreement. That’s a major difference. Additionally, the possibility of a few settlers remaining and becoming residents of Palestine could be examined. It's an idea that has come up in previous talks.

Is there a "point of no return", such as construction in the E1 area? What do you say to the growing circles of people who do deem the 2SS dead?

Baltiansky: I don’t believe in a point of no return, simply because there is no other solution. Partition is a means, not the goal. Many Palestinians, especially young ones, would prefer equal rights in a single state rather than two states. For Israeli Jews, that negates the basic tenet of Zionism, which is for them to "hold the keys" to the gate. The bottom line is that there’s one land that will either end up divided or become a single entity. The only ones who can kill the 2SS are those who believe in it. As long as we don’t give up, it is there. 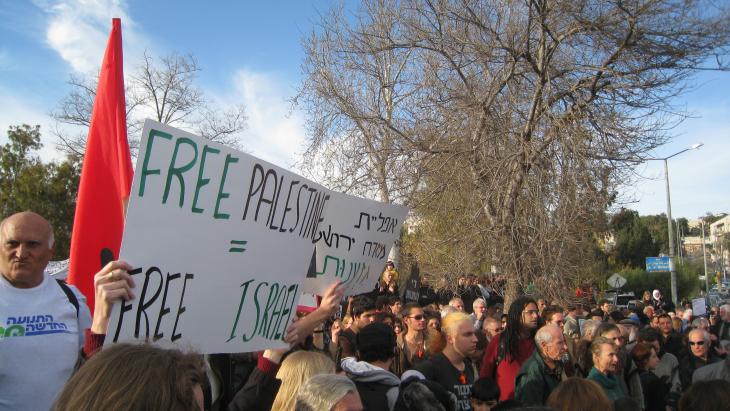 There is no point of no return: "Partition is a means, not the goal," maintains Baltiansky. "Many Palestinians, especially young ones, would prefer equal rights in a single state rather than two states. For Israeli Jews, that negates the basic tenet of Zionism, which is for them to "hold the keys" to the gate. The bottom line is that there’s one land that will either end up divided or become a single entity. The only ones who can kill the 2SS are those who believe in it. As long as we don’t give up, it is there"

What do you make of confederative initiatives such as A Land For All? Is there any dialogue between GI and those formulating alternative visions?

Baltiansky: I believe one of the models could indeed be a two-state confederation, as long as it is between two sovereign states with clear borders. And yes, there is dialogue. But my impression is that they don’t mind if that idea transitions towards one state. We at the GI, however, oppose a single-state outcome, because we believe it is a recipe for ongoing violence and we want to preserve a democratic Israel that is home to the Jewish people.

In hindsight, was the 2003 approach of emphasising separation rather than reconciliation misguided?

Baltiansky: I agree that for too long, we spoke too much of "divorcing" the Palestinians. Focusing on animosity and on the idea of a zero-sum game, rather than on a win-win situation and co-operation between both sides, was a nod to the centre-right. The top imperative remains to demarcate borders, but yes, our proposal was too technical and overlooked issues of narrative. We have reflected on this over the years. Today our seminars and workshops touch upon that as well.

How does the civil society alliance between Israelis and Palestinians currently look?

Baltiansky: We work day in, day out in partnership with the PPC. Thousands participate in our joint activities every year. Participation numbers are increasing, despite anti-normalisation efforts on the Palestinian side and a growing tendency in Israel to view delegations to Ramallah as bordering "treason". The publicity of our activity, however, is in sharp decline. Most Palestinian participants are very cautious and ask us not to publish images online.

How do you see the current role of international powers? Specifically, should anything change in the way the EU engages with the parties?

Baltiansky: The U.S. seems less engaged with our region, but would support any step forward. I think the EU has more leverage today than it realises. It prevented Khan El Ahmar’s eviction and construction in E1, for example. I know that there are Israeli ministers waiting for a third-party initiative to be put on the table for discussion, even if they won’t say it. FM Lapid is very EU-oriented, and unlike our previous governments, this one is seeking warmer relations with Europe. Israelis shouldn’t limit their thinking to security versus economy. It’s time for the EU to challenge us, not only over settlements or Sheikh Jarrah. We need diplomacy, otherwise the world will keep stepping in only as a "firefighter" when things explode. A political horizon must be presented to change that, perhaps as interim steps towards preserving a solution. This role can be played by the EU.

The Abraham Accords are shifting dynamics in the region. Do you see a possibility of Gulf states engaging in a peace process?

Baltiansky: I hope so. As of now, they aren’t showing signs of that, but we are still at the initial stages of bilateral relations. I am in favour of these accords, of course, and hope that these relationships will be a "carrot" that could also become a "stick" that will influence developments on the Israeli-Palestinian track.

Peace NGOs have faced increasing criticism by Palestinians for failing to change reality. Some go as far as calling them an "industry that rubber-stamps the occupation".

Baltiansky: There is inherent tension between fighting the occupation’s everyday implications and fighting to end it. Improving living conditions and reporting on human rights violations can change lives, and that’s a big deal. But for this to end, you also need to fight a political front to bring about an agreement. That’s why we have a diversity of NGOs. Some work on human rights and others, such as GI, on how to end the conflict. We have indeed failed every day, for thousands of days in a row. We will only have one day of success. But without all of those failed days, that day will never come about. We are not willing to give up on the chance for peace, and hope that as long as we don’t, the international community won’t give up on us.

Despite what heads of state may claim, the Russian attack on Ukraine is not a wake-up call for a self-confident Europe that defends its values. The war is accelerating the decline ... END_OF_DOCUMENT_TOKEN_TO_BE_REPLACED

At the EU's outer borders, the right of migrants to a fair asylum procedure continues to be systematically disregarded. Take Greece, for example: in the worst case scenario, those ... END_OF_DOCUMENT_TOKEN_TO_BE_REPLACED

Madrid's about-face on the Western Sahara conflict has enraged Algeria. Trade relations have been frozen unilaterally and a cut in gas supplies to Europe could be in the pipeline ... END_OF_DOCUMENT_TOKEN_TO_BE_REPLACED

Mourad al-Marouai was just nine when a landmine killed him on a beach in war-torn Yemen, a tragedy that will haunt his family forever. After a swim, the little boy "suddenly ... END_OF_DOCUMENT_TOKEN_TO_BE_REPLACED

A ceasefire has been in effect in Libya for the past year and a half. Yet after Russia's attack on Ukraine, another proxy war looms in Africa's most oil-rich country. Mirco ... END_OF_DOCUMENT_TOKEN_TO_BE_REPLACED

The Ukraine war has seen energy prices spike with oil producers in the Middle East making more money than ever. But will it put the brakes on long-planned reforms to diversify oil ... END_OF_DOCUMENT_TOKEN_TO_BE_REPLACED
Author:
Noam Yatsiv
Date:
Mail:
Send via mail

END_OF_DOCUMENT_TOKEN_TO_BE_REPLACED
Social media
and networks
Subscribe to our
newsletter