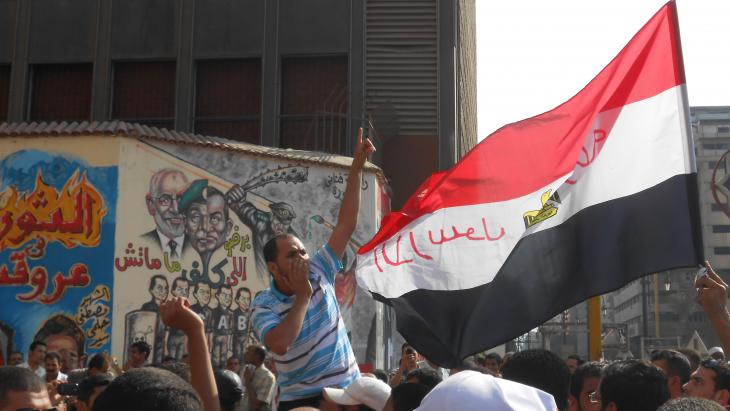 The "Reclaiming Downtown" campaign launched by the Egyptian government is no ordinary measure designed to advance the gentrification of the Cairo city centre. It is instead a politically motivated drive against any form of opposition and civilian autonomy. The "backyard of the revolution" is to be refurbished and its revolutionary history wiped out. By Sofian Philip Naceur

Downtown Cairo in the summer of 2012. After 18 months of political instability and military rule, and just a few weeks after the election of Mohammed Morsi from the Muslim Brotherhood as President, the troubled waters have now calmed down a bit – at least for the time being. The country is enjoying a political spring that will turn out to be more short-lived than many had hoped.

During that summer, the anti-Islamist opposition begins to gradually undermine Morsi and his government. Strikes, protests and rallies are the order of the day. Downtown Cairo in particular is the epicentre of a social free-for-all where political pluralism and diversity reign.

Bars and cafes are bursting at the seams. Activists, journalists, human rights defenders and cultural figures cavort through downtown Cairo, discussing strategies and planning their next steps. Heated debates are held loudly in public. It's not rare to find Communists, Islamists and economic liberals seated at the same table and hashing things out. Freedom of assembly and expression are thriving in the country, and hardly anyone is afraid to take a political stand.

The invisible power of the state

Graffiti artists go wild on the dreary grey walls of slowly crumbling old buildings, undisturbed by the police, while the streets fill with thousands of vendors peddling their wares in every corner of the district. The state authorities are invisible.

Today, five years after the start of the uprising against the regime of ex-dictator Hosni Mubarak, these are all but pale memories. The restored regime under President Abdul Fattah al-Sisi has done a thorough job of cleaning things up. Every trace of the revolution of 2011 has been dismantled or gradually eradicated. No wonder, because the downtown area served as the backyard of the revolution, says city planner Omar Nagati. It has thus become a symbol of the uprising against the ruling class. 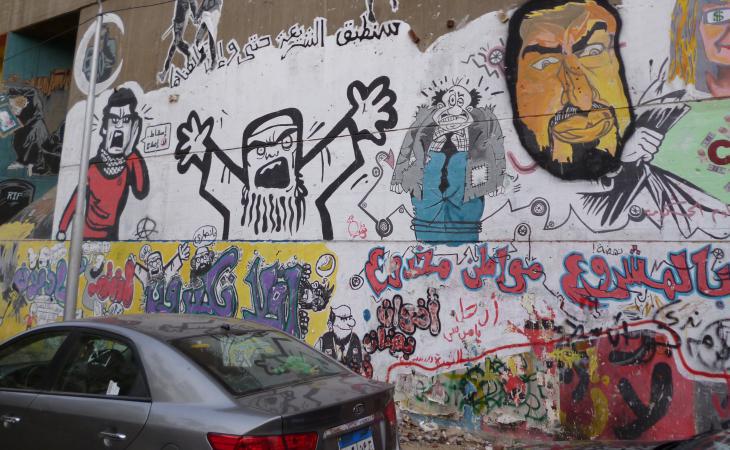 Downtown Cairo as symbol of revolution against the ruling classes: Mohamed Mahmoud Street was one of the centres for young street artists, where they vented their discontent about Egypt′s political and social inequalities in countless murals and graffiti

Ever since the coup against Morsi, protests by Islamist and left-wing liberal groups in downtown Cairo have been consistently put down, with more and more violence. The army brings in tanks and the Interior Ministry has restored its grip on the district. Every section of the every street is again filled with informers. Regime criticism is expressed only in whispers, for fear that plain-clothes officers might be listening.

Raids against everyone and everything that does not completely toe the regime's line have again become commonplace. Even cultural institutions have recently been targeted by the government. Just last December, the Townhouse Gallery, a popular cultural centre with a concert hall and exhibition spaces, was officially searched and then closed down. Shortly thereafter, the left-wing Merit publishing house was targeted in a raid.

Just before the anniversary of the revolution on 25 January, the regime is evidently getting nervous and resorting once again to open persecution of members of the opposition as well as everyday citizens. The message is clear: anyone who dares to challenge the government narrative or to publicly rebel and commemorate the events of January 2011 will be made to feel the full force of the regime.

Meanwhile, the government has been setting its sights since late 2013 on an initially symbolic, but now all-embracing gentrification of downtown Cairo. Building facades are being painted, emblematic Tahrir Square refurbished, parks laid out, traffic lights and video cameras installed. The police are omnipresent, regulating traffic and checking papers. Government facilities are being renovated. The headquarters of Mubarak's now-dissolved National Democratic Party, which burned down during the revolution and rose over Tahrir Square like a memorial, has now been razed. The days of the famous graffiti wall on Mohamed Mahmoud Street are numbered.

The English-language edition of "Al-Ahram", the country's most widely read state-published newspaper, writes that Tahrir Square is no longer a place of political dissent. Now only rallies cheering for the regime are tolerated.

Even the street vendors have disappeared. In mid-2014, the police and army began to violently expel them. Step by step and street by street. The problem was not the relocation of the vendors itself, but the way it was done, says Ahmed Al-Attar, who runs several cultural institutions downtown and organises D-Caf, the city's biggest cultural festival. "It was impossible to live here with all the merchants on the streets," he says. 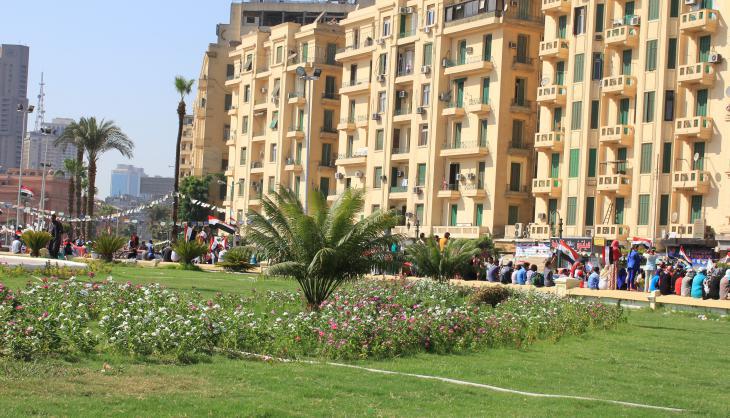 No sign of a revolution: since 2013, the government has been setting its sights on an initially symbolic, but now all-embracing gentrification of downtown Cairo. Building facades are being painted, the emblematic Tahrir Square refurbished, parks laid out

But to find long-term solutions, it is necessary to talk with people and involve them in the decision-making process. In the 1990s, attempts to upgrade the district already failed because the population was not integrated in the plans. And they will fail again. Because solutions imposed from above are not long-term solutions, stresses Al-Attar.

The most problematic aspect of the campaign in downtown Cairo is the political motivation behind it. Gentrification processes are actually quite normal, says Al-Attar. "Artists settle in certain quarters because the rents are cheap. They live and work there for a time and then they move on when real estate agents start taking an active interest in the area." But the ongoing gentrification of downtown Cairo is of a political nature. The government does not want the district to become a focal point for political movements, Al-Attar says.

"In recent years there have been systematic efforts to restore public order and state authority, which also meant winning back control of the public space. Downtown Cairo was the pilot project," says Omar Nagati. The project is however no longer limited to urban-development and aesthetic measures such as the expulsion of street vendors and the painting of building fronts, but now also includes security measures such as erecting barriers, restricting permission to assemble and reducing the freedoms of civil society, explains the city planner.

Today, the coffee houses and bars are poorly frequented and many have shut down or have been closed by the authorities. Guests are annoyed by new rules such as the prohibition against playing backgammon at sidewalk tables. The clientele is moving on, in part due to such restrictions. Concerts, theatre projects and political events used to take place here all year round. Today, there is a yawning silence.

All the while, the government continues to pursue its gentrification campaign disguised as modernisation and has now extended its scope to the informal central district of Maspero. Observers fear that much more radical steps will be taken here than in downtown, because there are no heritage buildings like those in the city centre but only informal structures. Thousands of people could lose their homes.

In this unusually beautiful book of images and text, published in German and Arabic, artist Marianne Manda presents her own unique take on the megacity of Cairo. In over fifty ... END_OF_DOCUMENT_TOKEN_TO_BE_REPLACED

A stage, lights, a mesmerised audience: it looks like an Egyptian folkloric concert, but Umm Sameh is singing to heal the sick by driving out the demons that possess them END_OF_DOCUMENT_TOKEN_TO_BE_REPLACED

Russia's ranking on the World Press Freedom Index has fallen again over the Kremlin's wartime censorship of the Ukraine conflict. From Myanmar to Mexico, journalists continue to ... END_OF_DOCUMENT_TOKEN_TO_BE_REPLACED

From the Euphrates to the Mekong, dams that ensure one country's water supply risk leaving others parched. But shared water resources can be a source of peace as well as conflict ... END_OF_DOCUMENT_TOKEN_TO_BE_REPLACED

END_OF_DOCUMENT_TOKEN_TO_BE_REPLACED
Social media
and networks
Subscribe to our
newsletter