Skip to main content
German Jews in Exile in Turkey

"Haymatloz" in Istanbul and Ankara

When the Nazis took power in 1933, hundreds of thousands of German Jews fled the country. Some of them ended up in Turkey, which was a neutral state and safe haven up until the end of World War II. Ursula Trüper recounts their story and that of the Ruben family 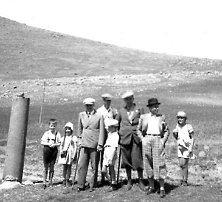 Between 1933 and 1945 round about 1,000 refugees came from Germany to Turkey. They helped modernising the country according to Attatürk

​​Gerhard Ruben will never forget his first day at school in Ankara. "It was a total disaster," he laughs. "I understood absolutely nothing." Nevertheless, this early educational setback does not seem to have caused any lasting damage. Gerhard Ruben went on to become a scientist and worked as an astronomer at the Berliner Akademie der Wissenschaften (Berlin Academy of Science) until 1992.

Ruben was eight years old when his parents decided to emigrate with bag and baggage to Turkey. The year is 1935. Ruben's father, Walter Ruben, who works as a private lecturer at the University of Frankfurt/Main, is considered a half-Jew. The only reason he is allowed to continue working at the university is because he is classified as a "front-line soldier."

Ruben Sr. is vehemently opposed to the Nazis. He does not want to wait around to find out what the new regime will do next and starts looking for an alternative. An acquaintance recommends Turkey to him. Soon after, Walter Ruben accepts an appointment at the recently founded University of Ankara, where he builds up the Department of Indology.

At the time, large groups of Germans who oppose the Nazis or were persecuted by them begin to form in Istanbul and Ankara in particular. These groups include well-known politicians and artists. Among their number is Ernst Reuter, who later became Lord Mayor of West Berlin.

Others like Bauhaus architects Bruno Taut, Martin Wagner, and Margarethe Schütte-Lihotzky, the sculptor Rudolf Belling, the musicians Paul Hindemith and Eduard Zuckmayer (the latter being a brother of the author Carl Zuckmayer), to name but a few, find refuge from the Nazis in Turkey for shorter and longer periods.

Approximately 1,000 people emigrated from Germany to Turkey around this time because they felt threatened by racist or political persecution. "They thought it would last two, maybe three, years," recalls Ruben. But this soon turned out to be illusory. Most refugees stayed in Turkey for between 6 and 15 years; some remained for more than two decades.

Above all, the German emigrants had Turkish President Kemal Atatürk to thank for the fact that they were able to live and work in Turkey. After the collapse of the Ottoman Empire in 1923, Atatürk proclaimed the Republic of Turkey and launched a stringent programme of modernisation. For this he needed foreign expertise. In view of the fact that relations between Turkey and Germany had been good since the days of the Empire, it made sense to also invite German experts to Turkey.

The Turkish government was only too aware of the difficult situation in which these Germans found themselves. The Turkish Minister for Education, Reshid Galip, made a point of emphasising that anyone who accepted an appointment in Turkey, "whether free, in prison, or in a concentration camp, will be considered a civil servant of the Turkish Republic and will enjoy the protection of the Turkish state." Gradually, however, Turkey began to impose stricter immigration and residence regulations on foreigners, as was the case in most countries to which people emigrated in order to flee the Nazis.

Evidence of their Aryan origin

After 1938 – a year in which the number of refugees from Germany increased following the annexation of Austria and the increasing threat of war – immigrants were obliged to provide evidence of their Aryan origin before being allowed to enter Turkey.

In the early days of the Second World War, Turkey tried to keep out of the hostilities. It maintained economic relations with both Germany and the Allies. However, by 1941 at the latest, all of its neighbouring countries were at war. "That was quite a strain," recalls Ruben. "We felt that it was really only a matter of time until the Wehrmacht marched through Turkey and into the Caucasus. They would have met with very little resistance."

Any emigrants who refused to return to Germany were denaturalised by the German Reich. The Rubens were also denaturalised. The Turkish authorities wrote "Haymatloz" (the Turkish spelling of the German word for stateless, "Heimatlos") in the emigrants' temporary papers. In 1944, Turkey entered the war on the Allied side. All Germans, whether Nazis or their opponents, were now suddenly considered enemy aliens. Many of them were interned. The Rubens were no exception.

"We were on holidays in a little summer house near Ankara when we were told that a bus was leaving in 24 hours and we had to be on it. We were only allowed to take the bare minimum with us." Internees were not, however, locked into camps, but were sent into exile in Anatolia.

After the war, those who were denationalised by the Nazi regime and applied to the recently founded Federal Republic for a new passport had to wait quite some time. All denaturalised Germans in Turkey had to wait until 1951 to get a German passport before they were finally able to return.

Jews in Turkey
A Varied History
Up until the attacks on two Istanbul synagogues on Nov. 15th, Turkish Jews were well accepted into Turkish society. Baha Güngör sketches the history and present situation of the approx. 20,000-strong Jewish minority in Turkey

Jews in Turkey
A Quiet yet Fragile Happiness
More Jews live in Turkey than in any other Muslim country in the world. They are struggling to regain the normality they lost in the bomb attacks of 2003 and hope that their native country will accede to the EU. Tobias Asmuth reports from Istanbul

Jewish-Turkish Dialogue in Germany
A Rabbi and a Turkish Diplomat as Figureheads
In the wake of the recent Lebanon crisis, Muslim-Jewish relations have further deteriorated. In Germany, however, the Jewish-Turkish Ülkümen-Sarfati Society, is actively encouraging better relations between the two communities. Abdul-Ahmad Rashid reports

END_OF_DOCUMENT_TOKEN_TO_BE_REPLACED
Social media
and networks
Subscribe to our
newsletter