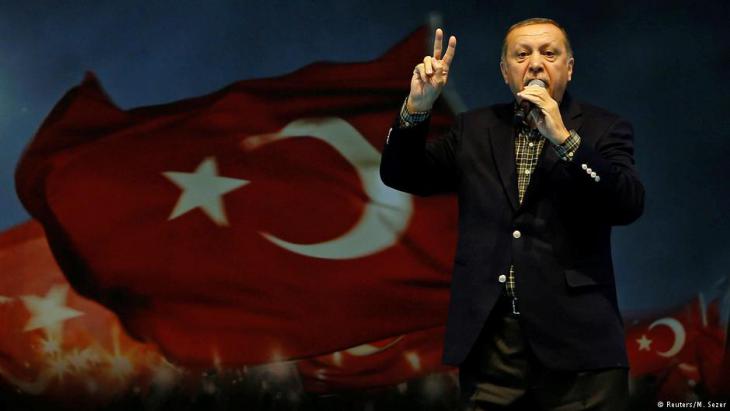 Repeated demands for Germany to take a firm line with Erdogan and to end the refugee deal with Turkey have become a favourite mantra of many among the German opposition parties. A hardening of the rhetoric alone, however, is hardly likely to induce Erdogan to change his tack. By Ulrich von Schwerin

According to her political opponents, Angela Merkel does not dare to say what she should say to Turkey because her refugee deal with the "Sultan of the Bosphorus" has made her too dependent on him. They argue that Merkel is choosing to remain silent on the persecution of journalists, the erosion of democracy and the repressive measures against the Kurds, because she is fearful of a repetition of the refugee crisis if she does not – and she is in the middle of an election year after all. The time has come, they say, for the Chancellor to make her position abundantly clear to Erdogan by abandoning the refugee deal. Though persuasive at first glance, this demand does not, however, hold water upon closer examination.

Let's suppose, for the sake of argument, that no deal had ever happened and that the whole refugee question did not exist. Would Merkel now be pursuing very different policies in her dealings with President Recep Tayyip Erdogan? Would she really be strongly denouncing civil rights violations in Turkey? And what difference would that make? Would it persuade Erdogan to release imprisoned journalists, to give up his plans for the introduction of a presidential system and to make peace with the Kurds?

The calls for harsher words are perfectly understandable, but we need to ask what good they would do. The Turkish leadership doesn't take kindly to criticism, but it is not going to change its policies because of it. If Germany really wanted to do something effectual, then the gloves would have to come off. Of course there are ways of putting pressure on Turkey – after all the economic and political dependence is mutual.

It would be possible, for example, to suspend the expansion of the EU customs union currently being prepared in Belgium. There could also be a stop to EU accession talks, something that some members of the opposition have been demanding for quite some time. Entry bans and account blocking for leading Turkish politicians, like those applied by the Europeans to Russian politicians in the wake of Moscow's annexation of the Crimean peninsula would also be conceivable. 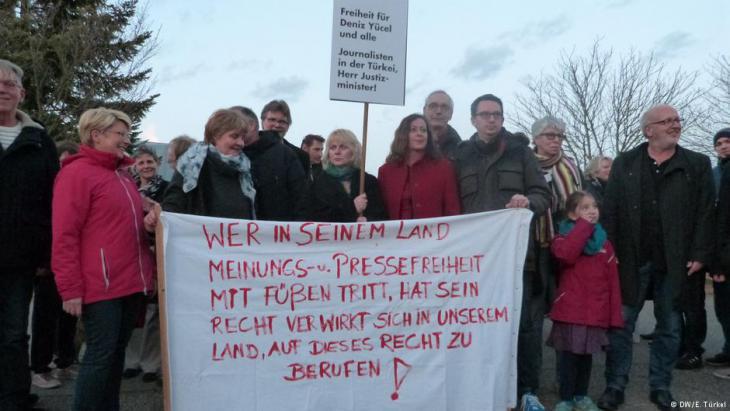 Anti-Erdogan protests in Gaggenau, Baden-Wurttemberg - ′He who shows no respect for freedom of speech in his country, cannot expect to assert his own freedom of speech here′: Turkish Justice Minister Bekir Bozdag was prevented from speaking at a public engagement there by the local authorities. His countryman Zeybekci received similar treatment in Cologne. The Turkish President Recep Tayyip Erdogan responded by accusing the German authorities of Nazi behaviour. Germany′s federal government dismissed his comparison of its modern democracy with National Socialism as "absurd and inappropriate"

One prerequisite, however, would be acceptance by the EU countries of a common policy, a display of unity that proved difficult enough to achieve when it came to the Crimea. The Europeans – especially the Germans – would also have to be prepared for the consequences of such a course of action. Were the EU countries to go ahead and impose real sanctions on Turkey, the current political turbulence would be nothing compared to the storm that would then be unleashed.

The cancellation of several events at which Turkish politicians were to appear in Germany, cooked up indignation to boiling point in Ankara and culminated in Erdogan's taunting reproach about Germany reverting to old "Nazi practices". Of course, this raises the question of whether Erdogan's angry outbursts are actually doing more harm than good to Turkey itself. It remains to be seen whether the self-inflicted damage caused by such furious reactions can be made good again.

The episode clearly reveals that for Erdogan historical friendships and economic interests are of little consequence if he feels he has been unjustly treated – and if he senses that there may be some advantage to be gained from anti-German rabble-rousing. There is no doubt that behind any genuine indignation, there is also political self-interest at play. The backing of his supporters in the referendum on the introduction of a presidential system of government is something his political survival depends upon.

In this respect it is highly unlikely that a tough approach would bring about any change in policy. There is also the concern that Erdogan might even benefit from conflict with Germany. The AKP politician has always relied upon the polarisation of politics and society to mobilise his followers in times of crisis. Both internal and external enemies can be made use of when he needs to get the electorate behind him.

Despite the fierceness of the current verbal attacks on Germany, any mention of the refugee deal has been conspicuously absent. In contrast to what it was saying last autumn, this time Ankara has not threatened any withdrawal from the deal. Evidently Turkey has understood that a termination would not be in its own best interests. Despite all the accusations of heel dragging on payment of the agreed EU aid, the billions allocated by Brussels is crucial for the provisioning of the Syrian refugees. 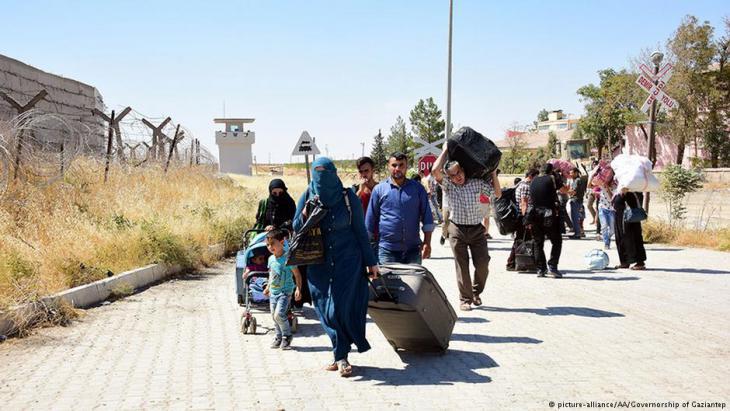 "When the Greens and those on the left demand termination of the deal, they are also expressing their sense of helplessness. For, as disconcerting and unsatisfactory as it is, there is no getting round the fact that neither Germany, nor Europe as a whole, now has much influence on Turkish policies," writes Ulrich von Schwerin

Added to this is the fact that the threat of ending the refugee deal is becoming ever less significant. Since the closing of the Turkish-Syrian border, very few refugees have been entering the country. The Balkan countries too have closed their borders, so that there is almost no chance of getting through to central and northern Europe anymore. Those few refugees who do manage to make it from the Turkish coast to Greece tend to end up on the Aegean Islands, where they often face inhumane conditions.

So only relatively few of the refugees in Turkey today are prepared to face the dangers that such an attempt entails. Many of those who wanted to go and could afford it, have already left. Even if Turkey was to terminate the deal, there would be no new refugee crisis. The refugee deal is no longer as important as it was last year and its significance for German-Turkish relations is overrated.

When the Greens and those on the left demand termination of the deal, they are also expressing their sense of helplessness. For, as disconcerting and unsatisfactory as it is, there is no getting round the fact that neither Germany, nor Europe as a whole, now has much influence on Turkish policies. With or without a refugee deal, the German government would be well advised to avoid any escalation of the situation. It would not benefit anyone and can only make matters worse.

Home
Print
Newsletter
More on this topic
The achievements of Erdogan: With me or against meErdogan and Turkish foreign policy: Neo-Ottoman rumblingsTurkey′s media crackdown: No freedom. No press.
Related Topics
European Union (EU), Justice and Development party (Turkey), Policy on refugees and migration, Recep Tayyip Erdogan, Refugees, Turkey and the EU
All Topics

EU parliamentarian Dietmar Koester criticises the Union's failure to speak up when faced with human rights abuses committed by its Middle Eastern allies, while pointing out that ... END_OF_DOCUMENT_TOKEN_TO_BE_REPLACED

U.S. President Biden has announced he will be excluding Saudi Crown Prince Mohammed bin Salman from future talks between Washington and Saudi Arabia. Is this just lip service that ... END_OF_DOCUMENT_TOKEN_TO_BE_REPLACED

The foreign policy direction favoured by Washington's new incumbent is putting a strain on relations with Turkey. The two nations look set to clash over a whole host of issues, ... END_OF_DOCUMENT_TOKEN_TO_BE_REPLACED

How can we truly appreciate the richness of cultures not our own? In her recent book "What is Islamic art? Between religion and perception", art historian Wendy Shaw explains the ... END_OF_DOCUMENT_TOKEN_TO_BE_REPLACED

In his controversial book published in 2020, French author Pascal Bruckner describes anti-Muslim sentiment as a fiction, claiming that the term "Islamophobia" is being used to ... END_OF_DOCUMENT_TOKEN_TO_BE_REPLACED

Several media reports in recent weeks have focused on the potential threat presented by Islamist groups in Germany. The discourse is fraught with generalisations, both sides ... END_OF_DOCUMENT_TOKEN_TO_BE_REPLACED
Author:
Ulrich von Schwerin
Date:
Mail:
Send via mail

END_OF_DOCUMENT_TOKEN_TO_BE_REPLACED
Social media
and networks
Subscribe to our
newsletter