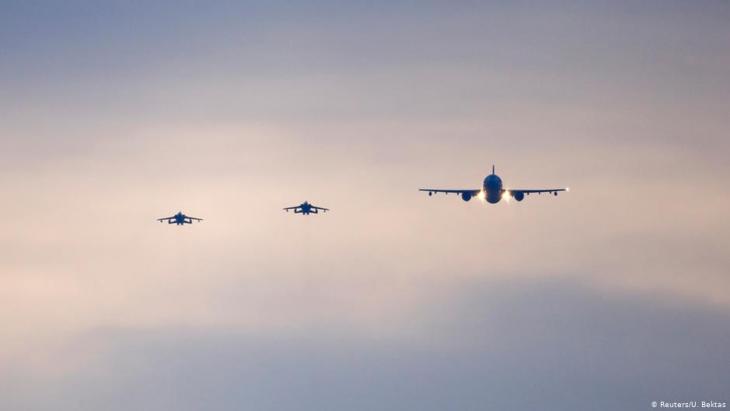 Despite internal wrangling, Germanyʹs ruling coalition partners have decided – subject to parliamentary approval – to prolong its military deployment in the fight against Islamic State. Individual parts of the mandate may be extended by varying degrees, but the deployment of German Tornados should only last five months. By Seda Serdar

Germany’s "anti-IS mandate", which was set to expire on October 31, is an ongoing bone of contention among the coalition partners in Chancellor Angela Merkel’s government. The mandate, which started in 2015, aims to help eliminate the so-called Islamic State (IS) in Iraq and Syria, as a part of the Coalition of the Willing. The United States recently said that IS has been significantly weakened but is not fully eliminated – and wants Germany to keep up its anti-IS efforts.

Merkel’s Christian Democrats (CDU) are clear in wanting the mission to continue. Juergen Hardt, foreign policy spokesman for the CDU parliamentary party, is convinced that "all components of the current mandate are useful and necessary." However, Merkel’s junior coalition partner, the Social Democrats (SPD) appear less convinced.

You may also like: The war in Syria is not over

SPD parliamentarian Siemtje Moller was among the delegation accompanying German Defence Minister Annegret Kramp-Karrenbauer (CDU) on a recent visit to Iraq and Jordan, where the minister championed the extension of the mission. Moller remarked that even though she saw that tactical aerial reconnaissance "made a meaningful contribution," she also pointed out that "a promise had been made to the parliament by the previous defence minister" to terminate the anti-IS mandate. 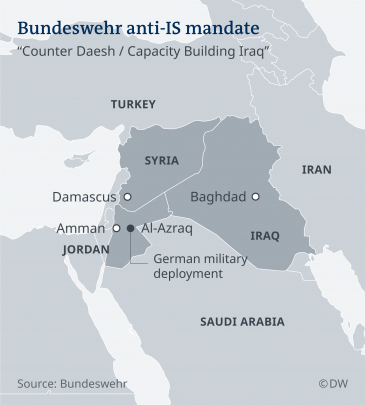 "Just another military in an already quite militarised Middle East": the German military contributes reconnaissance jets that can deliver detailed images of events on the ground, in-flight refuelling, aerial surveillance, exchange of position information with other international actors within the coalition. Germany also runs training programmes for Iraqi forces

Jurgen Trittin of the opposition Green party considers IS a serious threat, especially due to the fact that some 1,000 German citizens have fled to Syria and surrounding territories to fight for IS.

Still, Trittin rejects the mission on principle: "it is not being done according to international law. This is the 'coalition of the willing' operating over the sovereign territory of another country without a mandate from the UN Security Council," Trittin said.

Where do the real needs lie?

Currently, the German military contributes reconnaissance jets that can deliver detailed images of events on the ground, in-flight refuelling, aerial surveillance, exchange of position information with other international actors within the coalition. Germany also runs training programmes for Iraqi forces.

SPD’s Moller revealed that many requests coming from the Iraqi side focussed on "help in reconstructing schools, hospitals and the need for bridges and streets and less military support."

Since all German military missions have to be approved by the country’s parliament, the Bundestag, Moller emphasised that it will therefore be necessary to have a discussion about all components of the mission, including whether military capacity building "is still necessary or how much and for how long."The Bundeswehr mandate that will keep politicians busy in the coming months is not limited to Iraqi territory; surveillance flights and air refuelling over Syria are also a part of the mission.

According to the German news weekly Der Spiegel, the U.S. asked Germany to prolong the mission a few months ago. Washington has also reportedly asked for German boots on the ground in Syria, as the administration of U.S. President Donald Trump plans to move its own troops out of the country.

Germany was quick to reject this request, yet apparently is nevertheless prepared to go ahead with extending its anti-IS mission. Andre Bank, acting director of the GIGA Institute of Middle East Studies in Hamburg, believes if the extension does go through "it is more a gesture towards the Americans" and "it’s just another military in an already quite militarised Middle East." 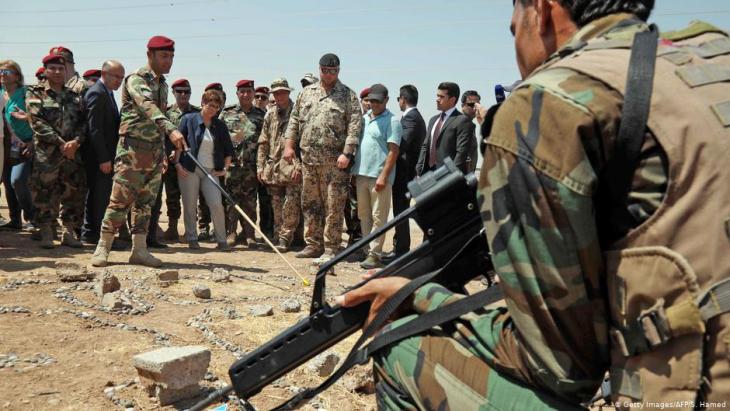 Suddeutsche Zeitung editorial: "Four Bundeswehr Tornados and a training mission won't be enough to permanently defeat Islamic State. As is always the case with terrorism, a clever long-term strategy that involves the rule of law, prosecutions, and humanitarian aid is required. Not just bombs. If the German parliament is to discuss the mission's extension in autumn, it should not make it too easy. The debate should be about what needs to be done to permanently keep IS down. And if Germany is prepared to do enough and do the right thing"

When it comes to policy on Syria, Germany also faces a difficult situation domestically. Bank says that its ties to Syria are "much stronger" than those of other European countries. This is not only due to the high number of Syrian refugees living in Germany, but also due to the Turkish and Kurdish communities in Germany. "So whenever the German government takes a very strong, one-sided position, it will also have domestic implications," says Bank, who sees this as one of the reasons for Germany’s "less confrontational approach."

The SPD’s Moller said that she would like to see Germany as a mediator in the Syria conflict. Even though this doesn’t seem likely since the regional and international actors engaged in the conflict are calling the shots, Middle East expert Andre Bank believes Germany can play "an important facilitating role" in stabilising Syria.

Bank argues that since Germany doesn’t have a strong colonial tradition in the region and also because it "has not called for an outright militarisation of the opposition", it is still considered by the Syrian government and its allies Russia and Iran "as an actor with whom one can talk and come to some kind of a conclusion."

Although Bank sees a "very limited sphere of influence" for Germany, he believes it can still play a role via bilateral meetings with Russia and through other formats with Turkey.

The coming months are likely to keep German lawmakers busy with discussions on the anti-IS mandate. Even though German politicians currently can’t agree on Germany’s military role in the region, they do agree that measures to stabilise Syria should go through the United Nations.

However, they also agree that this currently doesn’t seem plausible. The CDU’s foreign policy spokesman Hardt describes the situation as "frustrating" and says that "without Russia’s goodwill, we won’t make any progress."

Iranian author Fariba Vafi is adept at describing everyday scenes and concealing within them something ambiguous, in parts strange and grotesque. She writes novels – which have ... END_OF_DOCUMENT_TOKEN_TO_BE_REPLACED

Her grandparents are Jews – born in Tunisia and Algeria. Director Cleo Cohen has now broken the silence about this with a very personal debut. By Nadine Wojcik END_OF_DOCUMENT_TOKEN_TO_BE_REPLACED

Life imprisonment for crimes against humanity: that was the sentence handed down to Anwar Raslan in the world's first trial of a member of the Syrian torture system. Matthias von ... END_OF_DOCUMENT_TOKEN_TO_BE_REPLACED

Every year in December, the team at Qantara.de takes a look back at the articles that proved most popular with our readers. This year is no different. Here is a run-down of the ... END_OF_DOCUMENT_TOKEN_TO_BE_REPLACED

With his new album, "A Voice Keeps Calling Me", the Persian santur player Kioomars Musayyebi is building bridges from Iran across the Arab world to European early music. By Stefan ... END_OF_DOCUMENT_TOKEN_TO_BE_REPLACED

Former lawyer Said Haider has invented a chatbot for those seeking advice on anti-discrimination issues – Meta is the first chatbot of its kind in the world. In conversation with ... END_OF_DOCUMENT_TOKEN_TO_BE_REPLACED
Author:
Seda Serdar
Date:
Mail:
Send via mail

END_OF_DOCUMENT_TOKEN_TO_BE_REPLACED
Social media
and networks
Subscribe to our
newsletter