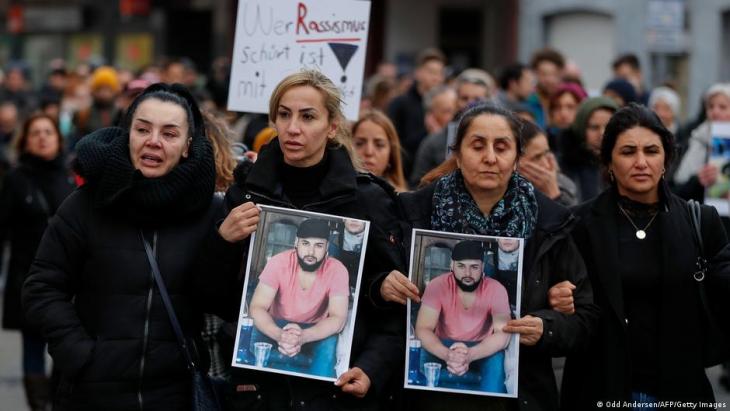 Violent and racist crimes are on the up in Germany, according to official statistics on politically motivated crimes. Crimes by right-wing extremists hit their highest levels since records began in 2001.

The minister expressed concerns over increasing incidences of politically motivated crimes, especially those carried out by right-wing extremists, such as the murder of 11 young people with immigrant heritage in the city of Hanau in February 2020.

"Politically motivated crimes are increasing significantly," Seehofer said, adding that 8.5% more cases were recorded in 2020 over the previous year. The data is very "concerning" because it represents a dangerous trend, despite only representing around 1% of all crimes, he added.

The interior minister was joined by the president of the Federal Criminal Office, Helger Munch. 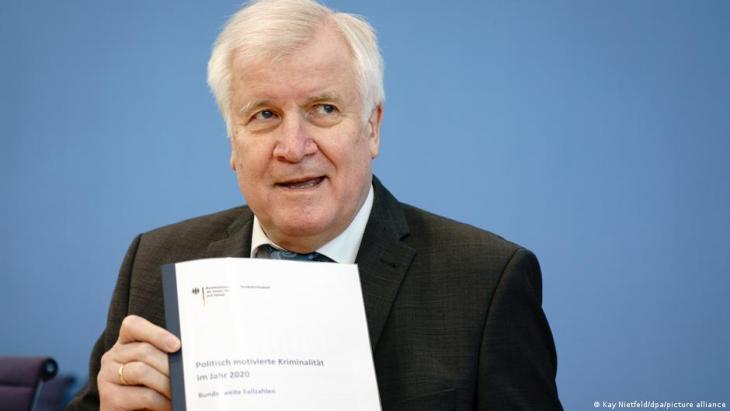 The majority of violent crimes classified as politically-motivated were perpetrated by right-wing extremists, with 13 victims of attempted violent crimes on top of the 11 who were killed in Hanau. "The increase in violent crimes by 18.8%, to a total of 3,365 incidents, is particularly bad," the interior minister said

The number of incidents recorded as being motivated by right-wing extremism increased to its highest point since the German police began to keep records of politically-motivated crimes in 2001. Some 23,064 crimes were counted as right-wing extremist, an increase of 5.7% over the previous year.

The majority of violent crimes classified as politically-motivated were perpetrated by right-wing extremists, with 13 victims of attempted violent crimes on top of the 11 who were killed in Hanau. "The increase in violent crimes by 18.8%, to a total of 3,365 incidents, is particularly bad," the interior minister said.

"This shows what I've been saying since the beginning of my time in office, that right-wing extremism is the biggest threat for security in our country, since the majority of racist crimes are committed by people from within this spectrum," he added.

Out of the criminal incidents that were classified as "crimes of expression" – including hate speech and propaganda – the vast majority, 65%, were considered to come from right-wing extremist perpetrators.

Antisemitic hate speech was also on the rise with an increase of 15.7% in incidents, many of which were carried out online, Seehofer said. "Antisemitic hate is a core component of right-wing extremist ideology. This development in Germany is not just concerning but, in the context of our history, deeply shameful," he added.

Attacks on journalists by COVID-19 deniers

Seehofer also brought up the protests against COVID-19 restrictions by the the so-called "Querdenker" movement, which loosely translates as "lateral thinkers."

The minister said that these people were exercising their rights of expression in a democracy, but the police had found problems in distinguishing between civil protesters and extremists among their ranks.

Seehofer also noted an increase of 11% for crimes coming out of the extreme left-wing scene, noting in particular a 45% increase in uses of violence.

Seehofer also pointed to the high level of "confrontational crimes" which he said were often perpetrated by left-wing extremists, such as taking part in counter-demonstrations to so-called Querdenker marches.

Despite the focus on right-wing extremism among the crime data and the threat it posed, Seehofer said the ministry would keep its eye on left-wing extremism – just as with Islamist extremism.

″Angst ums Abendland″ by Daniel Bax: The apocalyptics of the West

Fresh dispute over Islam: Why the German media are courting the anti-Islam movement

Islam and the West: What Islamisation?

Home
Print
Newsletter
More on this topic
Islamisation, a racist conspiracy theory: The hatred of Hanau and its enablersRight-wing extremism: Halle, Christchurch… a network of "lone wolves"Interview with Kay Sokolowsky: Racism dressed up as criticism of Islam
Related Topics
AfD | Alternative for Germany, Anti-Semitism, Islam in Germany, Islamophobia, Right-wing populism
All Topics

The memory of experienced injustice plays a central role in the transformation of societies towards democracy. In the Arab world, the critical study of memory is only just ... END_OF_DOCUMENT_TOKEN_TO_BE_REPLACED

The streaming festival "Female Voice of Afghanistan" by the Zeitgenössische Oper Berlin gives Afghan female musicians a global platform – at a time when their situation has ... END_OF_DOCUMENT_TOKEN_TO_BE_REPLACED

Western states have fought against terrorism not only in Afghanistan, but also in Syria and Iraq – leaving behind people who were once their partners in fear and poverty. Hisham A ... END_OF_DOCUMENT_TOKEN_TO_BE_REPLACED

Newly discovered aerial photographs taken by the German Luftwaffe show what a keen interest the Germans took in British-controlled Palestine during the Second World War. Not only ... END_OF_DOCUMENT_TOKEN_TO_BE_REPLACED

Religions are often a source of conflict. But the worldwide Religions for Peace movement seeks to change that by galvanising interreligious dialogue. Delegates from 90 countries ... END_OF_DOCUMENT_TOKEN_TO_BE_REPLACED

END_OF_DOCUMENT_TOKEN_TO_BE_REPLACED
Social media
and networks
Subscribe to our
newsletter