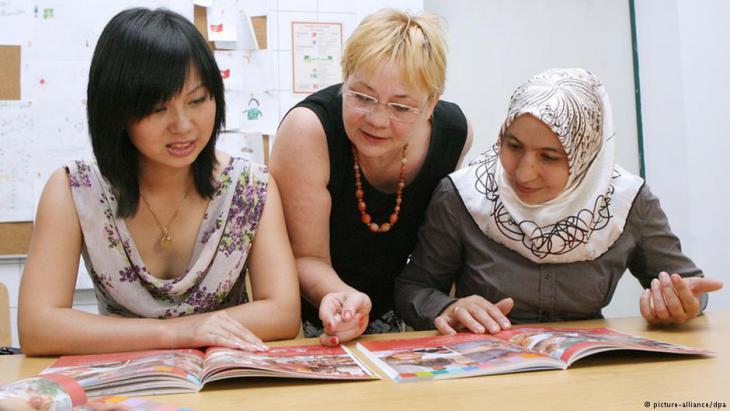 Piling on the pressure

What exactly does integration mean? And just how much allegiance may a society demand of its migrants? Such questions are currently the topic of vigorous debate – especially following the recent referendum result in Turkey. Expecting that migrants should do all the adapting in order to conform to the majority society will, however, only stir up conflict, warns Claudia Mende

2015 saw more than a million migrants arrive in Germany. They came seeking protection and the chance to build a new life for themselves and their families. There is no doubt that this new wave of immigration is going to change Germany. But with many of the practical difficulties, such as providing housing and language courses, now largely under control, the focus has shifted to the question of how best to integrate the new arrivals.

Last Sunday, 51 percent of those entitled to vote in Turkey′s referendum on the introduction of a presidential system voted ″Yes″. Of the Turkish diaspora in Germany, 63 percent voted in favour of President Recep Tayyip Erdogan′s agenda to consolidate his power. This has resulted in some hefty political debate.

While the Green Party regards the voting outcome as an indication of Germany′s failure over decades to implement an effective integration policy, the union of CDU and CSU is now vigorously debating the idea of abolishing dual citizenship. Gerda Hasselfeldt, head of the CDU sub-caucus said she had hoped that those Turks living in Germany would give democracy and the rule of law their clear endorsement.

Following the refugee crisis and taking into account the referendum voting behaviour of diaspora Turks living in Germany, it is hardly surprising that a debate is once more raging about what exactly integration means – and what Germany should require of its migrants.

Opinions on this run the gamut, from the belief that those seeking refuge in Germany must be prepared to adapt themselves to the customs and traditions of the country, to outright demands from right-wing populists that matters of central importance to Muslim identity, such as the building of mosques, should simply not be countenanced. Voices demanding assimilation, expecting migrants to adapt completely to "our values", are become increasingly loud.

The idea of a German leitkultur (leading or core culture) to which incomers should adapt – originally introduced into the discussion by the German-Syrian political scientist Bassam Tibi and given new impetus by CDU politician Norbert Lammert – has resurfaced in the political debate. The problem with the idea of a leitkultur is that it suggests that adhering to the laws of the country is not sufficient. New immigrants are also expected to observe the unwritten laws and share the country's cultural roots – whatever that might mean. The trouble with this is that it turns their own cultural identity and emotional attachment to their home countries into an impediment. 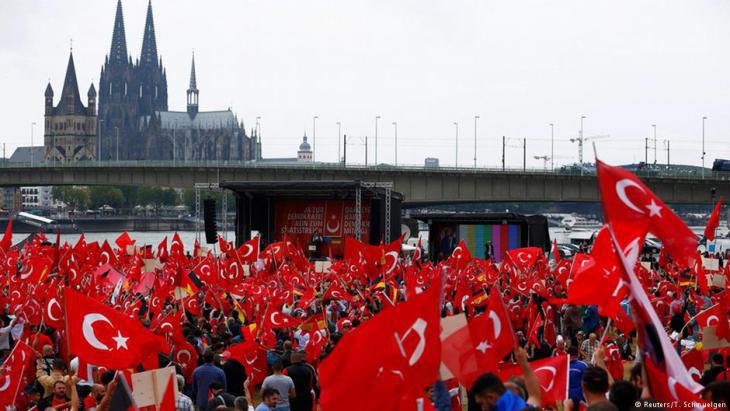 Divided loyalties? Following the Turkish referendum, Turks living in Germany have come under fire from union politicians and conservative representatives of the German media for supporting the autocratic policies of Erdogan: their ″Yes″ vote has been interpreted as a failure to identify with the democratic constitutional state of the Federal Republic of Germany

The Bavarian Integration Act, in force since 1 January 2017, already marks a step in this direction. Its aim is to help preserve the leitkultur as the "identity-defining and fundamental consensus" in the country. A similar intent is also detectable in the proposal by CDU politicians Jens Spahn and Julia Klockner for an Islam law that would impose legal conditions on mosque communities and a ban on funding from abroad. The intention behind it being to ensure not only that the imams in the mosque communities abide by the law, but also that they help in the dissemination of "German" moral values. More than fifteen years of debate on leitkultur, however, have so far failed to clarify what that actually means.

The difficulty is neatly encapsulated by migration expert Jochen Oltmer of Osnabruck University when he asks "who is it that migrants are expected to emulate – the punk or the educated member of the middle class? The experience of recent decades has shown that "integration is about more than just assimilation," Oltmer stresses. Germany is far too heterogeneous: the idea that there can ever be a uniform society is simply wrong. The sheer complexity and variety of lifestyles and cultural identities that exist today are in a greater state of flux than we often realise. Attribution of clear ethnic categories is becoming ever more difficult, ambiguity increasing. In some parts of cities such as Hamburg, Munich, Cologne or Berlin nowadays, the majority of the inhabitants have very diverse ethnic, cultural and religious backgrounds.

Lack of equal opportunities for migrants

For Oltmer, integration is more about equal opportunities on the job market, or having access to things such as education and health care. Of course, this is not just about migrants, it is about the participation of everyone and about society adapting to the needs of an altered situation. We are still falling someway short of equality of access and participation, however – something that also holds true for those with migrant backgrounds, people who were born in Germany and grew up here. 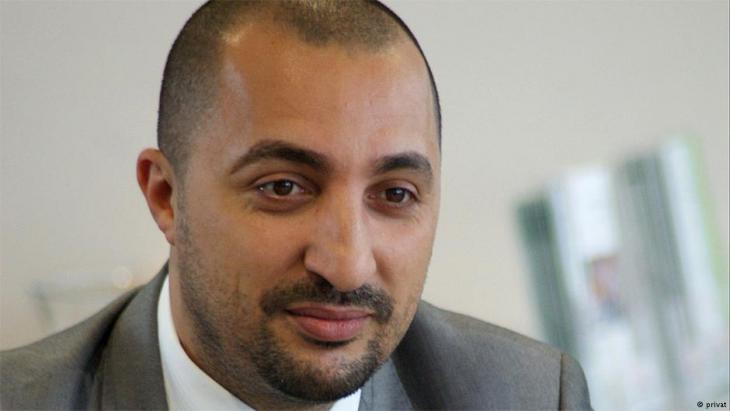 "Our progress is too slow," says social worker Samy Charchira from the group "Aktion Gemeinwesen und Beratung" (Community Action and Counselling) in Dusseldorf. He detects problems with "structural integration", in the form of barriers that prevent entry to training and employment and put obstacles in the way of finding accommodation, thus creating a situation where, increasingly, new migrants obtain housing only in undesirable areas

"Our progress is too slow," says social worker Samy Charchira from the group "Aktion Gemeinwesen und Beratung" (Community Action and Counselling) in Dusseldorf. He detects problems with "structural integration", in the form of barriers that prevent entry to training and employment and put obstacles in the way of finding accommodation, thus creating a situation where, increasingly, new migrants obtain housing only in undesirable areas.

Studies have shown that discrimination in the job market is all too real. School leavers with Turkish names are significantly less likely to be invited to a job interview than their German counterparts, for instance (one such study was carried out by the Expert Council of German Foundations on Integration and Migration in 2014). The housing market in the cities presents a similar picture. "If people are made to feel excluded, they are going to revert to old identities and seek their own alternative solutions," Charchira warns.

Migration researchers such as Ruud Koopmans of the Institute of Social Sciences at the Humboldt University in Berlin, on the other hand, as well as some sections of the general public, see the religion and culture of the migrants as an obstacle to integration. It is true, for example, that Syrian refugees come to Germany with very different ideas about gender roles, the family, or how to bring up children. But it is also true that those who turn "Islam" or "Arab culture" into impediments to integration overlook the fact that cultural identities are by no means set in stone.

On the contrary, they are in as constant a state of flux in Germany as elsewhere. The acceptance of same-sex love, for example, is also a recent phenomenon in Germany. Those who argue that migrants are fundamentally incompatible with liberal society because of their religious beliefs are demanding everything from the migrants and nothing from the society into which they come. That makes it even more difficult, for young migrants especially, to feel at home here.

Charchira regards "emotional integration", the difficulty young migrants face in discovering who they are, creating an identity of their own, as a very common problem. This, he says, is not only a problem for the refugees. Other young people, too, such as those from a Turkish background, who have grown up in Germany, are also susceptible. If we really want to encourage inclusion rather than create barriers for the sake of our own reassurance, then we must be prepared to promote modern values such as equality and tolerance, to support free and open discussion and acceptance of different sexual orientations, showing that these values are both attractive and that they pertain to all of us.

The question is, how best to achieve this? Clearly defamation of the new citizens is not the way.

In an article published in the Swiss newspaper, Neue Zurcher Zeitung, on 20th February, 2017, Peter Strasser, philosophy professor from the University of Graz in Austria called for greater consideration to be given to migrants' self-esteem. He complained of what he calls the "exclusion hysteria" of modern societies, which, under the "guise of rationality" brands people of different religions and origins as "other". Those wishing for exclusion can then claim that it is the "damaged self-esteem" of migrants that leads to disintegration.

This does not mean that there are no problems. Integration is a long-term process and conflict is normal. Andreas Fisch, lecturer in economic ethics at the Social Institute of the Archdiocese of Paderborn, has looked into the question of how a common sense of identity develops in a society.

He believes that problems need to be clearly identified but that this must be done without any disparagement of migrants. He argues for greater composure and for more confidence in the appeal of Western values. For him, it is fairness that is the crucial factor in the debate. Migrants must be granted the rights to which they are entitled and without reservation. Teachers should be permitted to teach in headscarves and schoolchildren allowed to wear a burkini in swimming lessons. Having to "put up with" a burkini is consistent with the liberal values of our society, Fisch maintains, "just as, by the same token, a priest may have to put up with a swinger club in the neighbourhood of his church, or owner of the swinger club put up with the pealing of church bells on a Sunday."

Only when different hopes and expectations are given room for fulfilment is the will to compromise increased. And this alone can bring about long-term and peaceful coexistence in an open society.

The New Patrons seek to sponsor art projects initiated by citizens in order to better dovetail art and life. Anyone can become their client. In Berlin, the impressive comic " ... END_OF_DOCUMENT_TOKEN_TO_BE_REPLACED

Since 2015 there has been a surge of interest in Syrian writing in German translation. In this series of interviews, writers, poets, publishers, and artists in Berlin talk about ... END_OF_DOCUMENT_TOKEN_TO_BE_REPLACED

Tents, mud and cold: refugees contend with miserable conditions in Bosnia & Herzegovina. With the European Union demanding that Bosnia accommodate the asylum-seekers, its ... END_OF_DOCUMENT_TOKEN_TO_BE_REPLACED

Last year was one of a kind. 2020 saw the rapid spread of the coronavirus pandemic, putting a stop to the hajj. Though peace in the Middle East remains a pipedream, there was ... END_OF_DOCUMENT_TOKEN_TO_BE_REPLACED

When news broke that a vaccine against COVID-19 developed by a Turkish-born couple in Germany had promising results, many media reports placed the ethnic background of these ... END_OF_DOCUMENT_TOKEN_TO_BE_REPLACED

A German IT company has started an academy to train Palestinians in software development. Despite the pandemic's challenges, it has managed to run its first boot camp in Ramallah ... END_OF_DOCUMENT_TOKEN_TO_BE_REPLACED
Author:
Claudia Mende
Date:
Mail:
Send via mail

END_OF_DOCUMENT_TOKEN_TO_BE_REPLACED
Social media
and networks
Subscribe to our
newsletter