Skip to main content
Germany's Role in the Gulf Region

Building Bridges between Europe and the Gulf States

German foreign policy should seek to consolidate the country's long-term strategic co-operation with partners in the Gulf region. After all, without a more active foreign policy, Germany risks sliding into a position of political insignificance in the Gulf. Eberhard Sandschneider reports 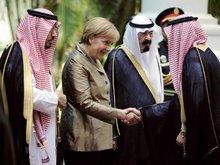 New impetus for trade with the Arab states in the Gulf: on her most recent trip to the region, Chancellor Merkel met high-ranking representatives of the world of politics and business in Jeddah, Saudi Arabia

​​It would appear that Germany's Middle Eastern policy is changing; thankfully not only with regard to the on-going issues of the conflict between Israel and Palestine or Iran's nuclear strategy. Angela Merkel's visit to four Gulf states was intended to be more than just a straightforward visit to the region by a German chancellor.

The strategic importance of the Gulf region has long – far too long – played a subordinate role in the spectrum of Germany's foreign policy interests. It is time to change this.

Germany needs a strategic outlook for the Gulf region that is not just restricted to economic interests. There are a number of very good reasons for this.

Willingness to enter into economic co-operation

First of all, Germany's economic and political reputation in the region remains high and the interest in co-operation that goes far beyond the economic sector is particularly great. As it is, economic co-operation is already good and in these economically challenging times, German companies in the Gulf region are finding a growing number of partners that are willing to co-operate.

About 750 German companies are already operating in the United Arab Emirates. The intention is that this number will increase in the future. In economic hubs like Dubai in particular, contacts emphasise time and again the high expectations in the region regarding Germany as a motor of co-operation with Europe. But it doesn't end there: Germany is also expected to assume a greater foreign policy role.

"The strategic importance of the Gulf region has long – far too long – played a subordinate role in the spectrum of Germany's foreign policy interests. It is time to change this," says Eberhard Sandschneider of the research institute of the German Council on Foreign Relations

​​Moreover, the time has come to stop seeing the United Arab Emirates in particular as nothing more than a producer of crude oil. The country's quantitative growth, which was based on its wealth of natural resources, has long since developed into qualitative growth.

Dubai provides ample evidence that it is not just the construction industry that is booming, but that improved transportation planning, traffic infrastructure, waste disposal and water treatment are increasingly the focus of major politically driven projects.

Naturally, international financial centres are emerging too. These centres are not only working consistently on the improvement of their infrastructure, but have also long since become the nerve centres for financial capital and platforms for strategic positioning.

Impressive investment flow growth rates between the Gulf states and the newly industrialised countries of Asia and Latin America are evidence of the political elite's growing willingness to play a more active role in international politics.

Naturally, one can protest that the political structures in the United Arab Emirates do not meet European expectations. However, it is also true to say that the UAE is one of the most liberal countries in the region: 22.5 percent of MPs are women. By way of comparison, the average in other Arab countries is only 9.75 percent. 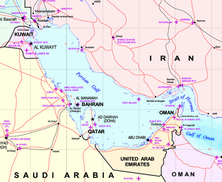 A breath of fresh air for German-Arabic trade relations in the Gulf? Chancellor Merkel would like German companies to be more involved than they have been to date in the up-and-coming Gulf region

​​Instead of preaching or acting like a senior partner, Germany would be well advised to focus its foreign policy on supporting the many little signs of liberalisation and openness by enhancing co-operation.

We will have to learn that the days in which the Europeans were the stronger partner and could dictate the rules of co-operation are over.

Despite their growing strengths, there will soon be very few regions that approach Germany and Europe as openly as the UAE.

In other words, it is not enough to be amazed that skyscrapers are sprouting up out of the desert sands in Dubai or to be pleasantly surprised by Sheikh Muhammad bin Raschid's liberal-mindedness and ambition.

Dubai is developing into a new and unusually high-performance global trade hub that can help safeguard German and European interests (political and otherwise) in the region and beyond.

German observers note that French, British, and American investors and institutions are already involved in a large number of strategic infrastructure projects in the region. There is a noticeable lack of similar German initiatives.

Such initiatives require the backing and support of an active foreign policy that is willing to flag up German interests without abandoning the country's securely anchored position in Europe or its transatlantic alliance.

In other words, the purpose of Merkel's most recent trip to the Middle East was not only to bolster the economy. The intention was also to consolidate long-term strategic co-operation with partners like Abu Dhabi and Dubai, which constitute a bridge between the Islamic and the Western worlds.

German foreign policy will need such partners in order to ensure that we don't wake up at the end of this global economic crisis to discover that Europe is no longer a pole in this multipolar world.

This might seem like a doomsday prophecy to some. However, the political elite in the Gulf region will be keeping a very close eye on how Germany acts not only as an economic partner, but also as a political partner.

Eberhard Sandschneider is director of the research institute of the German Council on Foreign Relations (DGAP).

Qantara.de The Gulf Region as a Foreign Policy ChallengeFragile Epicentre of GlobalisationThe Konrad Adenauer Foundation recently hosted an international conference attended by renowned experts to discuss the foreign and security policy challenges in the geostrategic important Gulf region – and the realistic opportunities for a stronger European commitment. Loay Mudhoon reports from Berlin The Geopolitical Significance of the Gulf RegionThe World's Gas StationIn geopolitical terms, the Gulf region has increased in importance over the last few years. The decisive factor in that process has been the presence of large oil and gas reserves in the area as well as its ambivalent relationship with Iran. Christian Koch looks at the rise of the six monarchies which make up the Gulf Cooperation Council Geostrategy in the GulfEurope Should Stop Treating the Region as US BackyardIn the face of the discredited US strategy for the Gulf region, Europe ought to step in and get involved, argues Christian Koch. According to the political analyst, Europe is able to offer concrete solutions to the region's problems

END_OF_DOCUMENT_TOKEN_TO_BE_REPLACED
Social media
and networks
Subscribe to our
newsletter