Ghada Abdel Aal and her Book "I Want to Get Married!"
From Anonymous Blogger to Bestselling Author

To begin with it was only a blog – but what a blog! The young Egyptian Ghada Abdel Aal started off writing "I Want to Get Married!" anonymously on the internet. But the overwhelming response to her writing made a major Egyptian publishing house prick up its ears. And so the blog became a book – and a bestseller at that. Susanne Schanda met the writer in Zurich 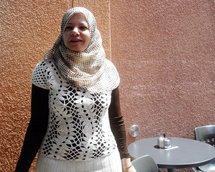 "Men are scared of women with brains": Ghada Abdel Aal in Zurich, Switzerland

​​ Her beige and brown polka-dot silk scarf slung tightly around her head and neck, she smiles happily at the camera. Ghada Abdel Aal is not a retiring wallflower. She's a woman with power. That doesn't just have advantages, though. "It's a fatal mistake for a woman to contradict an Egyptian man, and I do it very often. I just can't keep my mouth shut, I always say what I think. That has a very negative effect on my marriage prospects," says 31-year-old Abdel Aal at our interview in Zurich.

Born in the small town of Mahalla al-Kubra to the north of Cairo, she was just an ordinary young Egyptian woman until a few years ago. Like most girls, she fixed her eyes on the ground when a man was present, speaking only quietly in a gentle voice. She tended to keep her thoughts to herself, having noticed at an early age: "Men are scared of women with brains." She studied pharmacy and went on to work as a hospital pharmacist in her hometown. When her mother died, her aunts began looking for potential marriage candidates for her.

"Most of them were terrible," she recalls. Abdel Aal rejected every one of them. And to share her experiences, she started her blog "wanna-b-a-bride.blogspot.com" in 2006. With huge success, as the many readers' comments proved. She had hit a nerve in Egyptian society. 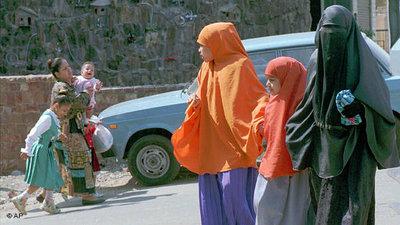 "I am not a cow": Ghada Abdel Aal introduces herself on her blog as "a representative of 15 million females from 25 to 35 years who are pressured by the society everyday to get married even though this matter is out of their hands"

​​ Dripping with sarcasm, she described the problems of husband-hunting in Egypt. Customs decree that a decent girl doesn't go out with boys – either on dates, for a trip to the movies or a cup of coffee – so the only way to meet men is through special appointments with prospective husbands arranged by the family. Candidates usually bring their mothers along to meet the would-be bride and her family. By watching and asking questions, both parties hope to find out whether the young people would make a good couple. A demeaning procedure, says Ghada Abdel Aal: "I'm not a cow."

The blog was an ideal means of communication, she tells me in excellent English: "I wrote anonymously. Only a handful of friends and neighbours knew about it, and encouraged me to carry on." And also her father, an unusually liberal man by Egyptian standards. Despite earning her own living for years, she still lives under his roof, running the household for him and her brother. Without her father's permission, she could never have come on this reading tour to Europe.

Success turns life on its head

The blog helped Ghada Abdel Aal to discover her writing talent. She would never have thought her jottings were good enough for a book, especially as she writes in Egyptian dialect. 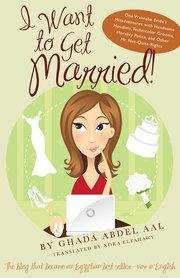 "It's a fatal mistake for a woman to contradict an Egyptian man, and I do it very often." Cover of Abdel Aal's "I Want to Get Married!"

​​But the people at Dar al-Shurouk, Egypt's largest literary publishing house, took a different view, publishing the blog as a book in 2007. The printed version revolves around ten visits from potential husbands. Between them, Abdel Aal has inserted glosses on subjects such as "well brought-up girls", "how to catch a bridegroom", "why do I actually wanna be a bride?" and "old maids". The book hit the bestseller lists immediately, and has since been translated into German, English, Italian and Dutch. It's now being adapted for a TV series, for which Abdel Aal wrote the screenplay. The series is scheduled to air at prime time this coming Ramadan.

The young writer has given countless interviews and writes a weekly column in an independent newspaper. "My life has changed completely," says Abdel Aal. "I go to Cairo two or three times a week for readings, book signings or my work on another screenplay. Lots of people are waiting for my next book." She still wants to marry, as she'd like to have children, she tells me, but finding a husband is no longer her highest priority.

Egypt has an active blogosphere. Alongside the many political blogs, Abdel Aal's site was the first to focus on society and the first to take an open and direct look at arranged marriages. And that provoked a hearty response. The blog reaped both enthusiastic support and aggressive comments: "One man told me to shut my mouth and suggested someone ought to marry me so I'd finally quieten down."

Despite her sassy, direct approach to the subject, the writer is not a revolutionary aiming to change society. Ghada Abdel Aal covers her hair with an elegant silk scarf and accepts the conservative customs she grew up with. Marriage is a sacred institution for her. 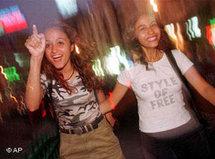 Emotional emancipation: "We are looking for a real partner, someone to share our lives, our feelings, dreams and ideas with," explains Abdel Aal on behalf of Egyptian women

​​ "I just wanted to show the other side of the coin. The fact that we Egyptian women do want to marry, and not just a man with money – we're looking for a real partner, someone to share our lives, our feelings, dreams and ideas with," she explains. That takes time, she says, but women aren't given that time if they're seen as too old to marry at the age of 30, labelled "old maids" at a relatively young age.

For Ghada Abdel Aal, the book was a step out of the shadows of anonymity – she has become famous, which makes her chances on the marriage market even slimmer. "Nobody dares to get close to me now and men are scared they might find themselves in my next book," she says. But she's not giving up: "One day I'll find Mr. Right. Perhaps."

The book in English: "I Want To Get Married! One Wannabe Bride's Misadventures with Handsome Houdinis, Technicolor Grooms, Morality Police, and Other Mr. Not Quite Rights", translated from Egyptian Arabic by Nora Eltahawy, Center for Middle Eastern Studies, University of Texas at Austin, 2010

Motalakat Radio in Egypt
The Voice of Divorced Women
Mahasin Saber wants her "Radio for divorced women" to put the spotlight on the serious deficits in the male-dominated Egyptian society, and to make people aware of the discrimination suffered by women. So far, she's succeeding. Nelly Youssef visited her in Cairo

END_OF_DOCUMENT_TOKEN_TO_BE_REPLACED
Social media
and networks
Subscribe to our
newsletter