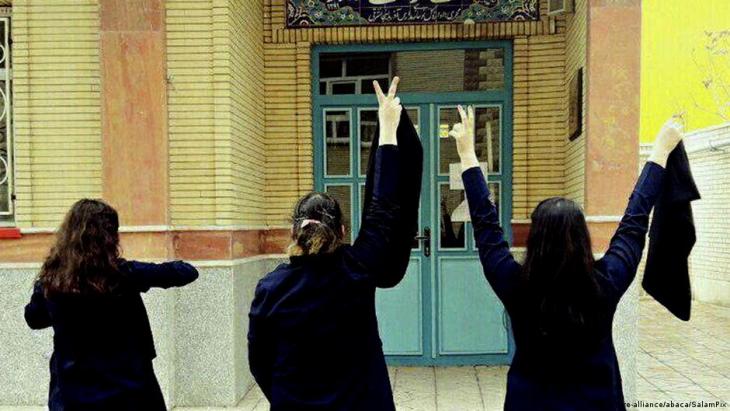 In "Iran. Die Freiheit ist weiblich", journalist Golineh Atai describes the dogged resistance of courageous Iranian women against the Islamic Republic and the mullahs who have ruled Iran for more than 40 years. Claudia Mende read the book for Qantara.de

Golineh Atai was five years old when she was forced to leave Iran with her family in 1980. Yet for this television journalist and current head of the ZDF studio in Cairo, the fate of the country is obviously a subject close to her heart.

From the outset, Atai emphasises that the worst thing about Iran is not even the reality: that is, that people have been threatened with torture, imprisonment and death for more than four decades for trivial reasons. The worst thing is that "the Western public gets to hear little or nothing about what goes on in Iran on a daily basis". This gap between the force of events and the lack of headlines weighs heavily on the Iranian people, especially the women. They feel isolated in the tragedy of their situation.

Her interview partners frequently assert that the lives of Iranians must be worth nothing. How else to explain the Western public's lack of interest? With her book Iran. Die Freiheit ist weiblich – literally 'freedom is female' – Atai seeks to lend a voice to the unsung heroines of Iran.

From autumn 2020 to summer 2021, she conducted interviews with women, some of whom live in the country, others in exile, in Turkey, Belgium, Slovenia, Canada or the USA, and who have all become role models owing to their own particular struggles. These are incredibly courageous women who have paid a high price for taking a stand, and you are unlikely ever to have heard of them. 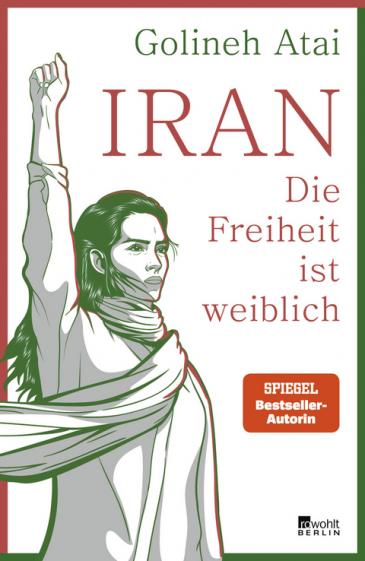 A voice for Iran’s unsung heroines: the worst thing is that "the Western public gets to hear little or nothing about what goes on in Iran on a daily basis". This gap between the force of events and the lack of headlines weighs heavily on the Iranian people, especially the women. They feel isolated in the tragedy of their situation. Her interview partners frequently assert that the lives of Iranians must be worth nothing. How else to explain the Western public's lack of interest? Atai seeks to lend these heroines a voice

A voice for the invisible heroines of Iran

Enmity against women is a cornerstone of the political system in Iran. Apparently, those in power are more afraid of women than of their ideological opponents, writes Atai.

After Ayatollah Khomeini arrived in Tehran from his exile in Paris in 1979, it took him just 15 days to abolish the progressive legislation on marriage and divorce that had been reformed under the Shah.

Men regained the right to marry four women and, unlike women, to divorce at will. Education Minister Farrochru Parsa, the first woman to hold a government position was executed for being a representative of the Shah's regime.

Atai's mother was among the women who demonstrated in vain against the restrictions imposed by the new rulers. It was a last stand against the establishment of the Islamic Republic.

But the resistance against this oppression continues and it takes vastly different forms.  It is Atai's personal accounts and the biographies of the women featured that make the book so special and set it apart from other "Inside Iran" stories.

Only her biography and her long-standing contacts made this selection possible at all.

These are stories of indomitable resistance and the search for dignity. Atai is remarkably close to the experiences of her interviewees, she shares their pain about the fact that change within the framework of the system of the Islamic Republic is apparently not possible.

They have all experienced this over the course of their lives, but they don't all draw the same conclusions.

Dedicated to women whose voices have never been heard

There is Shiva Nazar Ahari, for example, who in 2005, during the final term of President Khatami, helped launch the One Million Signatures Campaign, an initiative to educate the general public about the legal status of women and to use signatures to launch a petition to change anti-women laws.

Shiva was imprisoned twice for her activism and then went into exile in Slovenia, demoralised. Or Atena Daemi, who campaigned against the death penalty. After China, Iran is the country with the most executions worldwide.

During the 2009 protests, she helped the families of those imprisoned and killed, took part in a campaign by activists against the death penalty, protested outside prisons until she too was arrested and sentenced to 5 years in prison after refusing to show "remorse". In prison, she went on hunger strike because of the terrible prison conditions.

Or the journalist Sahra Rusta, who works on the border with Pakistan and Afghanistan and documents the lives of people in one of Iran's most underdeveloped regions. The province of Sistan Balochistan is being hit particularly hard by climate change. Drought, water shortage and poverty characterise this region, where the Sunni Baloch people are in the minority. 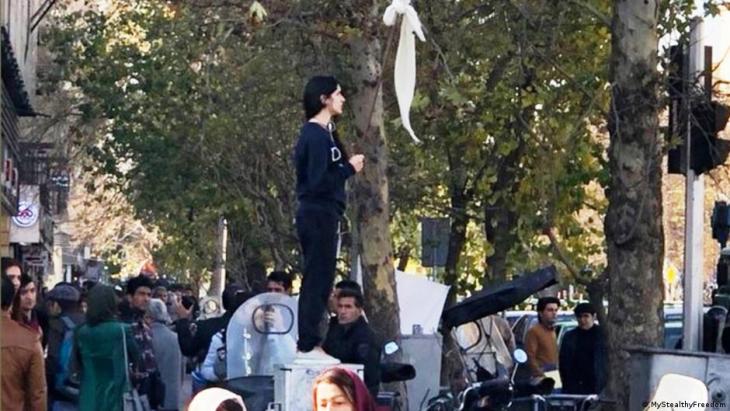 In December 2017, a young woman named Vida Movahed (pictured here) climbed onto a junction box on Revolution Street in central Tehran, took off her headscarf, tied it to a stick and waved it in the air. She was arrested on the spot. The police announced shortly afterwards that she had psychological problems and that other women were not expected to follow her example. Wearing a headscarf has been compulsory in Iran since the 1979 Islamic Revolution. Girls and women must also wear a long, loose coat in public to cover their hair and body contours. Moral guardians everywhere make sure that women abide by this rule

The journalist has been put under pressure by the Revolutionary Guards to retract her reports on the discrimination of minorities who do not have valid papers as "emotional" and influenced by "feminine feelings". Rusta signed her retraction, deciding she wanted to stay in Iran, for now, at least.

Another heroine is office worker Asam Jangrawi, who climbed onto a junction box on Revolution Street in Tehran and let her hair down for 40 minutes. She became a role model for many Iranian women. Asam paid for this pivotal moment in her life with abuse and endless interrogations, losing the custody of her daughter. Shortly before the girl was to be handed over to her ex-husband, however, Jangrawi managed to flee to Turkey. With her child.

The question of whether it makes sense to stay or whether it is better to leave resonates in all the reports. Atai does not judge the women's different decisions, she meets her characters with a lot of empathy and respects their unique circumstances.

Reading the book, you can't help but wonder why those in power are so afraid of women. "Islam" is certainly not the cause, because it is open to wide range of interpretations, as Atai points out. One of the interviewees, Fatemeh Sepehri, the daughter of a cleric, who fought tirelessly for her right to an education and has gone on to become an internationally acclaimed women's rights activist, gives a single answer: women are stronger than men.

She says those in power are well aware of this, which is why they oppress them. More than 500 women's rights activists are currently in prison. Thus, the struggle for a better system is inseparable from the fight by Iranian women for equal rights. 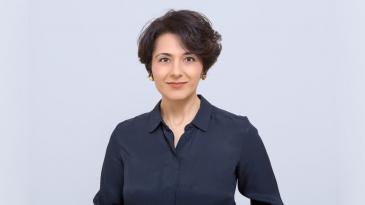 Golineh Atai has been head of the ZDF studio in Cairo since 2022. The Tehran-born journalist and author was a correspondent in Cairo for ARD from 2006 to 2008 and a correspondent in Moscow from 2013 to 2018, after which she worked for WDR in Cologne. She has been the recipient of a number of German awards, including "Journalist of the Year 2014", the Peter Scholl Latour Prize and the Hanns Joachim Friedrichs Prize

In the West, however, people don't want to know much about her fate. Only little is reported about the human rights violations against Iranians. Even if what ultimately happens to them makes it into the news at all, articles remain scanty, revealing little of the people involved.

One reason for this is not wanting to provide those circles that pursue a hard line against Iran – such as the Republicans in the USA – with further justification for their policies.

For Atai, remaining silent about these human rights violations out of political expediency is not the answer. Moreover, she repeatedly calls attention to one of the West's preferred delusions. Those who put their faith in the so-called reformers in Iran are hoping in vain for fundamental change.

The reformers have long since lost all credibility among the population. They are "leftists carved from the ribs of the Islamic Republic", Atai quotes an Iranian journalist in exile, but they are not really an alternative to the regime.

Golineh Atai’s Freedom is Female is a personal and haunting book that provides a rare insight into Iranian society and the defiance of its women.

Nouara may be 65, but she is ready to join thousands of others who burn their ID and pay traffickers for the chance of a new life in Europe. Zineb Bettayeb reports END_OF_DOCUMENT_TOKEN_TO_BE_REPLACED

Education for girls and women is still possible in Afghanistan, says Reinhard Eroes of the Kinderhilfe Afghanistan initiative. In interview with Elisa Rheinheimer, he talks about ... END_OF_DOCUMENT_TOKEN_TO_BE_REPLACED

Locals in the Middle East have said European critics are showing bias and hypocrisy when they condemn Qatar. Observers agree that Qatar has had to deal with more criticism than ... END_OF_DOCUMENT_TOKEN_TO_BE_REPLACED

In Doha, Arabs from Morocco, Tunisia, Egypt and Algeria are gathering to celebrate the first ever FIFA World Cup to be held on Arab soil. The criticism from Europe? Over the top, ... END_OF_DOCUMENT_TOKEN_TO_BE_REPLACED

Canan Topcu came from Turkey to Germany as a child. In her essay, she describes how bothered she was by the racism she encountered in her country of origin when she travelled ... END_OF_DOCUMENT_TOKEN_TO_BE_REPLACED
Author:
Claudia Mende
Date:
Mail:
Send via mail

END_OF_DOCUMENT_TOKEN_TO_BE_REPLACED
Social media
and networks
Subscribe to our
newsletter