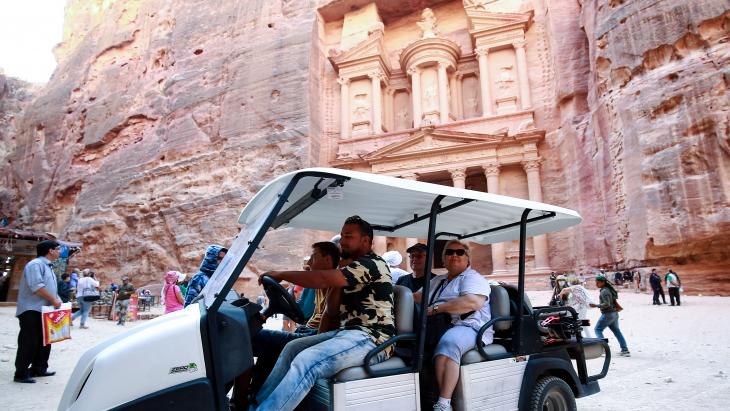 Horses and mules have long drawn tourist carriages through Jordan's ancient city of Petra, but animal rights concerns are driving a project to start replacing them with electric vehicles.

A small fleet of 10 rechargeable e-carts now take visitors through the rose-coloured Siq or gorge leading to the famed capital of the Nabateans in Jordan, which dates back to the first century BC. "There is no pollution or smoke" and the change has "reduced the cases of animal mistreatment," said Suleiman Farajat, head of the Petra Development and Tourism Regional Authority.

The golf buggy-style vehicles have less impact because "sometimes the carriage wheels hit the sides of the Siq ... the horse dung caused a bad smell in the place, and cleaning it was not easy. "It was an unpleasant experience for the tourists, the horses and us," said Farajat.

Animal rights group PETA, which had criticised the use of the often scrawny and overworked draft animals, has described the project as a "major first step to protect working animals". The group hailed the "game-changing vehicles" and added that it hopes to work with officials "toward the day when there will be only animal-free transportation at Petra".

For now the Petra authority says it will keep some of the horses "to preserve the character of the place, as it is a world heritage site".

The change has however also been hailed for another reason - helping to make the UNESCO World Heritage Site far more accessible to elderly and disabled visitors. Austrian tourist Rudy, 43, who uses a wheelchair, said he had repeatedly postponed a visit because of the COVID-19 pandemic, and was now "very happy" to have made the trip.

"Disabled people but also people who have difficulty walking for a long distance ... now have a chance to see this amazing place." 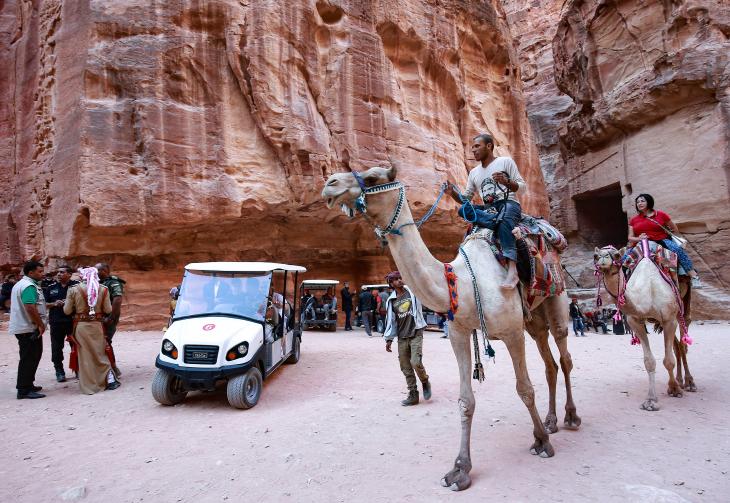 Ten electric carts have replaced 12 of the more traditional animal-powered carriages that transported tourists to the landmark site, in an effort by the authorities to address criticism over animal abuse, among other things

A U.S. tourist named Angie, 60, agreed: "It seems a little bit out of character to have these in a beautiful place like this. But at our age, it was nice to come back in an electric cart."

Jordan's tourism industry is recovering from the blow of COVID-19, having previously relied on it for more than 10 percent of its GDP. The pandemic slashed revenues from $5.8 billion in 2019 to $1 billion last year.

Petra, Jordan's most famous tourism site, provides a living for hundreds of families. The move to replace 12 horse-drawn carriages with 10 e-carts was agreed with the horse owners' association.

Foreign tourists pay 25 dinars ($35) and Jordanians 15 dinars for the round trip from the visitor centre to the archaeological site. The association receives 75 percent of the income, while 25 percent goes to the authority, said Farajat.

The head of the association, Mohammad Amarat, said those operating the electric carts earn more than 300 Jordanian dinars (about $423) per month. One benefit is that the carts can carry five passengers, compared to just two in the horse-drawn carriages.

He prefers the new vehicles because previously the horses "were tired, their income was less, and the journey time was longer".

Home
Print
Newsletter
More on this topic
Eco-tourism in Jordan: Guests of the BedouinQantara photo essay: The treasures of JordanAlternative tourism in Tunisia: Off the beaten tourist track
Related Topics
Animals in Islam, Antiquities and historical monuments, Arab world, Climate change, Ecology, Economy, History of the Near and Middle East
All Topics

Despite Syria's lengthy civil war, dictator Bashar al-Assad is now being courted by many governments in the Middle East as if nothing ever happened. The reasons for this vary. By ... END_OF_DOCUMENT_TOKEN_TO_BE_REPLACED

Jordanian writer Jalal Barjas' novel "Notebooks of the Bookseller", which won this year's Booker International Prize for Arabic Fiction, was celebrated at a symposium during the ... END_OF_DOCUMENT_TOKEN_TO_BE_REPLACED

Winner of the Student Oscar: a little girl in a bombed-out flat in Syria. The television is her only window to the world – but even this is taken away from her. Nikolas Fischer ... END_OF_DOCUMENT_TOKEN_TO_BE_REPLACED

While Bashar al-Assad is still shunned by the West, which blames him for a decade of brutal war in Syria, a shift is under way in the Middle East, where Arab allies of the United ... END_OF_DOCUMENT_TOKEN_TO_BE_REPLACED

Berlin's annual Human Rights Film Festival closed at the weekend. One entry to the festival was the documentary "Captains of Zaatari". Its Egyptian director Ali El Arabi focuses ... END_OF_DOCUMENT_TOKEN_TO_BE_REPLACED

Germany's foreign policy is explicitly values-based. But what happens, Ralf Bosen asks, when democracy, the rule of law and human rights collide with the logic of trade and ... END_OF_DOCUMENT_TOKEN_TO_BE_REPLACED
Date:
Mail:
Send via mail

END_OF_DOCUMENT_TOKEN_TO_BE_REPLACED
Social media
and networks
Subscribe to our
newsletter