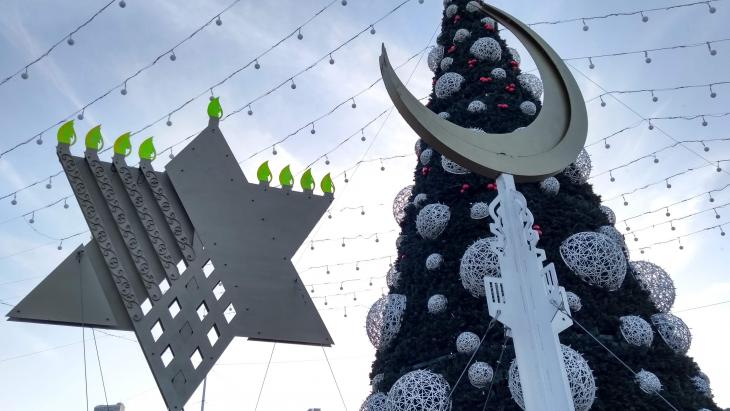 Haifa's Holiday of Holidays
The festival where everyone is welcome

Haifa is known for being Israel’s exemplary model of relative harmony between Jewish and Palestinian citizens. Its unique "Holiday of Holidays" is a joyous, multicultural event that has become a major player in domestic tourism. After a two-year break due to the pandemic, Noam Yatsiv writes from this year's festival

Ever since 1993, December has witnessed the staging of a most unusual holiday in Israel’s northern port city of Haifa, the community's very own "Holiday of Holidays". The timing is clever, as December usually brings Christmas and Hanukkah very close together – the former observed by about half of the city’s Palestinian-Arab population and the latter celebrated by its Jewish majority. Sometimes the month of Ramadan even coincides with December as well, although the last time that happened was nineteen years ago.

The celebration is the flagship of Beit Hagefen’s year-round activity – Israel's only cultural centre specifically dedicated to joint Jewish-Arab dialogue. According to the organisers, the festival aims "to promote and foster tolerance and mutual respect through culture and art". The initial “Holiday” was a relatively modest event, correlating with the optimism of the Oslo Accords era.

Over the years it has become a major event, supported and promoted by the city. After last year’s “Holiday” consisted entirely of online events due to COVID-related restrictions, local authorities expect this year’s event to draw a similar quantity of visitors as 2019’s record figure of 150,000 per weekend. 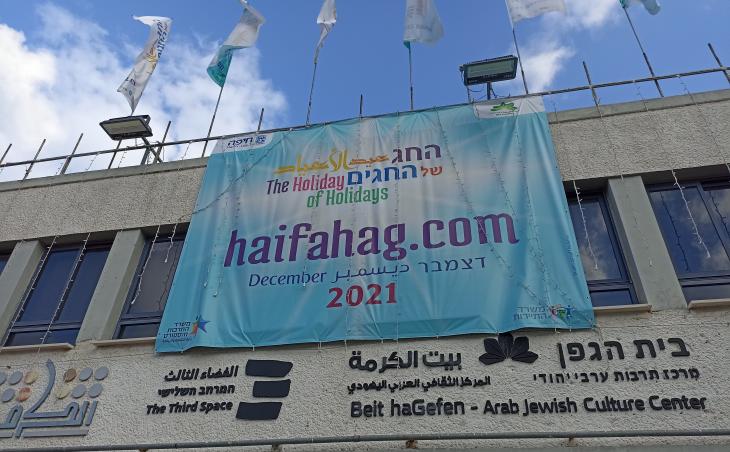 Haifa's Holiday of Holidays: the flagship of Beit Hagefen’s year-round activity – Israel's only cultural centre specifically dedicated to joint Jewish-Arab dialogue. According to the organisers, the festival aims "to promote and foster tolerance and mutual respect through culture and art"

Most visitors flocking to the city over the weekends are looking for the closest thing to a Western Christmas market they can find without boarding a plane. Families come to grab a bite at the countless food stalls and perhaps to catch a marching band parading. Teenagers take endless selfies in front of neat, neon-lit trees. And although the decor does include Menorahs and Hilals, the prevailing atmosphere is that of a consumeristic Christmas party. Like most people in today’s globalised world, Israeli Jews and Arabs apparently find snowflakes, red stockings and reindeer to be very attractive.

There’s some irony in this, considering that the festival takes place in the actual – Middle Eastern – cradle of Christianity: the land where Christ was born. Over here, the thought of a sledding Santa flying in from the North Pole requires a much stronger imagination than in, say, Chicago or Stockholm.

Nevertheless, those who do seek a broader cultural programme will have a hard time choosing: from theatre plays to Palestinian embroidery workshops, political art exhibitions to walking tours, dance performances, liturgical music and plenty of performances for children.

Ranin Tabarani mentors a group of youngsters who meet on a weekly basis at Beit Hagefen’s Jewish-Arab youth club. This year, her group will prepare decorations for the event together with families of children from a local bilingual school.

"Every year," she says, "kids from the theatre group have new ideas for promoting our club among festivalgoers. Last time, they walked the streets dressed up as astronauts, communicating with the crowd using pantomime only. After drawing attention and evoking enough curiosity, they occasionally stepped out-of-character and told people about the youth club. Reactions were fantastic."

The Christian educator also teaches art in a Jewish suburb of Haifa, and many of her peers are Holiday fans. "A Jewish co-worker said, 'It’s just like Europe!'... I realise that she meant it as a compliment, but to me it’s unfortunate that this is what she takes from it. I hope that people who come from out of town will get a taste of Haifa’s unique quality of shared living." 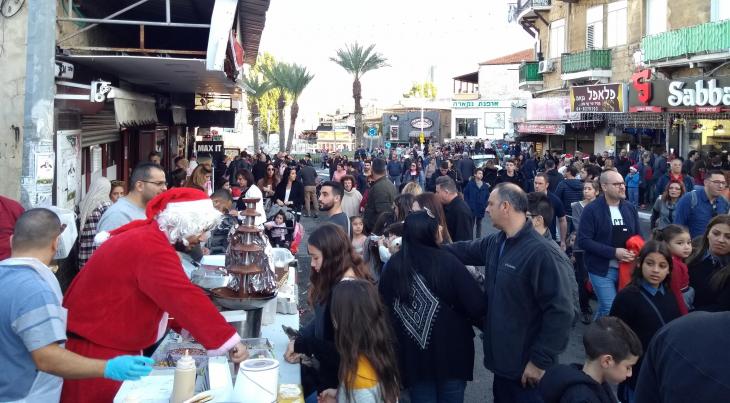 Hillel Kita, a local Jewish 8th-grader, sums up the spirit of the festival: "The Holiday reflects Haifa’s true spirit. Especially because of the awful things that happened this year, it just feels right to be celebrating together downtown – Christians, Jews, Muslims, Druze, religious people, secular people – even if we’re mostly just eating stuff. Sometimes that’s what people need. A colourful place with less talking, good music, where everyone is welcomed"

Tabarani lives in the historic German Colony district, where the largest street fair takes place, and she’s not too happy with the hustle and bustle which grows more hectic by the year: "It’s like being under siege every weekend for a whole month. The traffic is unbearable, we can’t go anywhere, not to mention the noise… At least our church is within walking distance."

What about the Palestinian identity?

Israel’s Christian Palestinians are often perceived by the Jewish majority as more "Israelised" than their Muslim compatriots. This minority within a minority, which makes up about 10% of Israel’s nearly 2 million Arab citizens, is statistically the most successful segment of Israeli society in terms of higher education and median income.

Politically, the community is very diverse, ranging from radical Palestinian figures such as former MK Basel Ghattas to hard-line Israeli patriots such as social media star Yoseph Haddad, with most people naturally being somewhere in the middle. The ultra-patriotic types, however, are those typically garnering more attention as Christians by Israeli mass media.

In light of that, the festival’s "Christmassy" nature in a Jewish-majority city could potentially carry political undertones. Riham Saraya is a local criminologist who attends the event annually. A Muslim herself, this year she took her family to a bilingual children’s play about Christmas and Hanukkah.

When asked whether she feels that the Holiday of Holidays dedicates enough of its platform to their identity, she said, "My kids are too young to notice any of that. We enjoyed the play a lot, and I’m glad we went because it’s important for me to expose them to other cultures. But as a youth, I do remember noticing that the cultural events included so few Islamic elements. My friends and I used to go out there every weekend as teenagers, and I did feel a lot of local pride in the event. But at the same time, I often wondered why my background wasn’t quite as celebrated."

While Saraya still overall views the festival favourably, others view it rather critically. Anthropologist Rolly Rosen and Shahira Shalabi, a Palestinian activist who currently serves as Haifa’s vice-mayor, question the event’s nature in a joint essay. 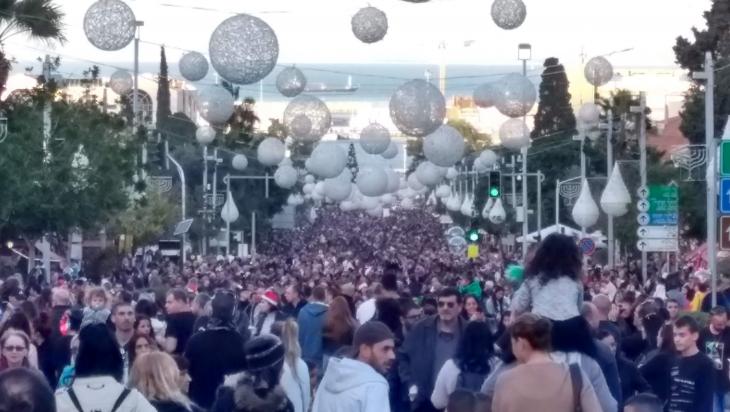 Clever timing for a commercial edge: December usually brings Christmas and Hanukkah very close together – the former observed by about half of the city’s Palestinian-Arab population and the latter celebrated by its Jewish majority. Sometimes the month of Ramadan even coincides as well

The branding of Haifa's diversity

They see the Holiday of Holidays above all as an economic endeavour, branding Haifa’s diversity as an ongoing touristic resource rather than as an effective platform for dialogue between Jewish and Palestinian citizens. They further argue that the emphasis on the city’s diverse religious identities blurs the more contentious national tensions simmering below the surface.

The broader picture, however, involves matters far more concerning than traffic jams or questions of cultural representation. This year’s festival is being held only months after a burst of ethnic violence on Israel’s streets. As Hamas and the IDF exchanged fire during May, Haifa was shaken by unprecedented night-time marches of thugs chanting "death to the Arabs" and hurling rocks at Arab homes. Thirteen kilometres away, in Acre’s old city, businesses owned or co-owned by Jews were looted and torched, leading to the death of a hotel guest.

Surprisingly, when asking attendees about the festival, it was a thoughtful teenager who brought that up: Hillel Kita, a local Jewish 8th-grader, has been attending the festival every year since he can remember. Expressing optimism about the event’s deeper value, he said, "The holiday reflects Haifa’s true spirit. Especially because of the awful things that happened this year, it just feels right to be celebrating together downtown – Christians, Jews, Muslims, Druze, religious people, secular people – even if we’re mostly just eating stuff. Sometimes that’s what people need. A colourful place with less talking, good music, where everyone is welcomed".

Asmaa al-Atawna's debut novel "Missing Picture" has been published in German translation (Keine Luft zum Atmen – Mein Weg in die Freiheit). In it, she describes life in Gaza from ... END_OF_DOCUMENT_TOKEN_TO_BE_REPLACED

At the end of every year, the team at Qantara.de gives you a run-down of the ten most-read articles on the site over the past 12 months. Here is a quick overview of the stories ... END_OF_DOCUMENT_TOKEN_TO_BE_REPLACED

Palestinian Christians are an integral part of the Palestinian national movement. This is the conclusion reached by the Chilean-born Palestinian political scientist Xavier Abu Eid ... END_OF_DOCUMENT_TOKEN_TO_BE_REPLACED

Jesus – Issa in Arabic – doesn’t merely enjoy the highest place among the prophets in the Koran. He is also revered in Islam’s mystical tradition for his message of love and mercy ... END_OF_DOCUMENT_TOKEN_TO_BE_REPLACED

With reported hostilities against Israeli journalists and the flag of the Palestinian territories flying on the streets and in the stadiums, it is clear the World Cup in Qatar is ... END_OF_DOCUMENT_TOKEN_TO_BE_REPLACED
Author:
Noam Yatsiv
Date:
Mail:
Send via mail

END_OF_DOCUMENT_TOKEN_TO_BE_REPLACED
Social media
and networks
Subscribe to our
newsletter