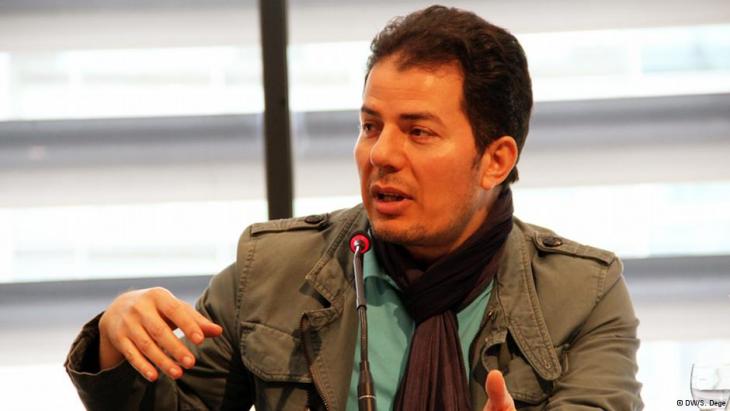 Hamed Abdel-Samad's book "Der islamische Faschismus" (Islamic Fascism) is not a serious analysis, but a platitude-laden polemic against political Islam. Ironically, the book shows that its author has more in common with the people he is criticising than he realises. By Daniel Bax

Being threatened by Islamists can be dangerous. The West has been aware of this since British author Salman Rushdie had to go into hiding for years when the ageing Supreme Leader of Iran, Ayatollah Khomeini, issued a fatwa against him in May 1989. Since then, the word "fatwa", which is actually the Islamic term for a religious legal opinion, has had distinctly murderous overtones.

But not all threats are equal. And these days, some people use the fact that they have at some point been threatened by one Islamist or another as a kind of seal of approval or badge of honour – comparable with brash rappers who emblazon their CD covers with the proud tag: Caution: Explicit Content!

Seen in this light, the German-Egyptian writer Hamed Abdel-Samad is the brash rapper among critics of Islam: there is much about him that appears somewhat overblown, pretentious and dubious. But in his case, many German journalists graciously turn a blind eye to the obvious contradictions and inconsistencies; they enjoy being dazzled or allow mitigating circumstances to prevail as if they were thinking: well, that's what people are like in the Middle East; they have a tendency to exaggerate. This can be the only explanation for the fact that the writer is billed by the German media as an Islam expert, although the only thing that seems to qualify him for this title is his Egyptian background.

In November 2013 it became clear that the "death fatwa" issued against him obviously wasn't all it was cracked up to be. After all, the 42-year-old travelled to Egypt despite the alleged danger to his life. When he was abducted, many assumed that Islamists were to blame. In the end, it turned out to have been nothing more than a banal argument over money.

The incident threw up many questions: why does someone choose to travel to a country where his life is supposedly under threat? And why does he deliberately leave his bodyguards behind to go and meet strangers in a busy downtown location, even omitting to tell his closest relatives about it? Let's just say this: Salman Rushdie wouldn't have behaved like that. 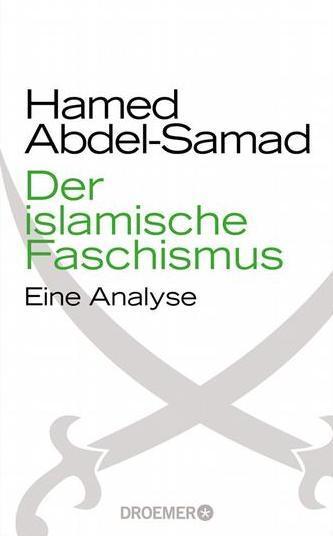 According to Daniel Bax, "'Der islamische Faschismus' is a scrappily pasted-together book that contains a haphazard blend of Wikipedia knowledge, personal anecdotes and commentaries by the author."

To this day, Hamed Abdel-Samad has not yet supplied a convincing explanation for his behaviour. By the same token, no one has actually asked him to. What he is doing, however, is giving interviews on his new book. It is entitled "Der islamische Faschismus" (Islamic Fascism), and the cover is of course graced with the claim that the book's author has been slapped with a "death fatwa" for its provocative contents.

It is indeed the case that Abdel-Samad presented his central theory – that fascism had already been established in the early days of Islam, and that the conquest of Mecca by supporters of the Prophet Muhammad planted the initial seed – during a talk given to a small gathering in Cairo back in June 2013.

Once a video of the event appeared on the Internet, Islamists in Egypt launched a hate campaign against him. This was all the more remarkable given that up until that point in time, Abdel-Samad was largely unknown in Egypt. But since the military ousted Egyptian President Mohammed Morsi in July 2013, the climate has changed. For example the hate preacher Assem Abdel Magad, who threatened Abdel-Samad and many others including prominent politicians, actors and Christians via an Islamist broadcaster, has fled abroad. He is thought to be in Qatar, from where Egyptian police are seeking his extradition.

Abdel-Samad has expanded his basic theory a little in his book, drawing a line from Abraham right through to the modern Islamism of today. In doing so, he does not make much of a distinction between the Egyptian Muslim Brotherhood, Salafists, the Mullah regime in Iran and the Wahabbis in Saudi Arabia – they're all religious fascists in one way or another.

The author chooses to ignore such fine details as the fact that Shia and Sunni Muslims are fighting each other tooth and nail in Iraq and Syria, and that Saudi Arabia sponsored the Egyptian military coup against the Muslim Brotherhood, because it fears the movement represents democratic competition. After all, they don't fit into his crude black-and-white view of the world.

"Der islamische Faschismus" is a scrappily pasted-together book that contains a haphazard blend of Wikipedia knowledge, personal anecdotes and commentaries by the author. It also studiously ignores the current status of research, for example on the subject of anti-Semitism in Arab nations.

What the author refers to as an "analysis" is in reality an outdated, platitudinous polemic. Equating Islamism and fascism is nothing new. US President George W. Bush claimed that his country was fighting what he referred to as "Islamofascism" in order to justify his invasion of Iraq and the passing of stringent anti-terror laws. Israel picked up the fascism charge to justify its wars against Hezbollah in Lebanon in 2006, Hamas in the Gaza Strip in 2009 and its threats to attack Iran. For the most part, the comparison serves bellicose or at least undemocratic purposes.

Abdel-Samad is now linking the catchphrase "Islamic fascism" with the theory of the potential for violence, which he claims is inherent in all monotheistic religions. Ten years ago, the very same theory was expounded by the cultural scholar Jan Assmann, who was, even then, not in a position to explain why, if this is indeed the case, there have also been – and still are – robust fascist movements among Hindus in India, or in Japan. 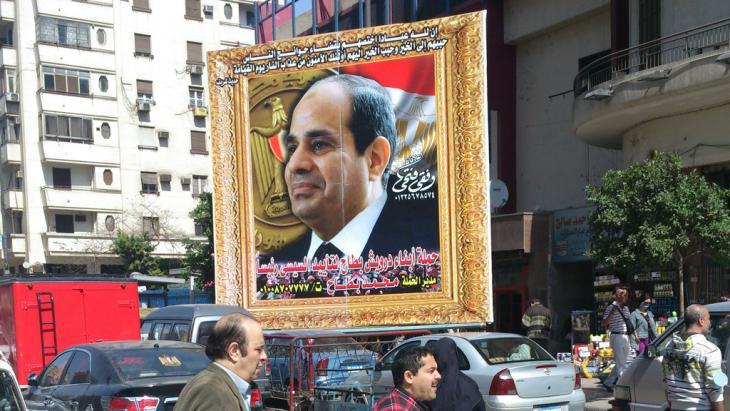 Iconography of a ruler in waiting, General Abdul Fattah al-Sisi. Ironically, the very things that Hamed Abdel-Samad criticises in Islamists are the very characteristics that describe Egypt's military rulers: a pronounced friend-foe rhetoric, the dehumanisation of the opponent, recourse to conspiracy theories and a bizarre leadership cult

Moreover, the European example shows that even monotheistic religions allow themselves to be pacified. Why then should this not be possible in the Middle East too? Incidentally here too, most of the violence occurring in the twentieth century was not born of religion, but was caused by overblown nationalism and authoritarian regimes. And as pleasant as his plea for secularism may sound to western ears, there has never been a real separation of state and religion in Egypt or in any other nation in the region – and there won't be one under Egypt's new strongman, General al-Sisi, a man with no fewer Koran verses in his repertoire than his opponent.

If anyone needs to fear for their lives in Egypt at present, then it is above all the supporters of the Muslim Brotherhood, currently languishing in their hundreds in the nation's jails. But Abdel-Samad has no sympathy with them. On the contrary, writing in the German daily tabloid "Bild" in July 2013, he even hailed the coup against Morsi – the first civilian in the history of Egypt to be elected president – as a "victory of hope". Since then, he has been very busy on his Facebook page acting as the Egyptian army's unofficial spokesman. His cynical comment following the army's massacre of hundreds of members of the Muslim Brotherhood who had been demonstrating for the reinstatement of their President read: "It took more than politics to vanquish fascism".

A short time later, he wrote that the arrest of the brotherhood's senior leadership was "not a violation of human rights", but simply terror prevention. And even after the scandalous fast-track death sentences handed down to 500 members of the brotherhood in late March 2014, he could not bring himself to issue a clear moral condemnation of the punishments, criticising them only as "inappropriate means". "This is not the way to deter terrorists" was his terse judgement, issued during an interview. After all, regardless of what happens, Abdel-Samad is sticking to his story: the members of the Muslim Brotherhood are "not victims", but would themselves profit "the most" from the death sentences, which would make them martyrs. This is how victims are turned into perpetrators.

In all of this, the irony that his own definition of fascism is much more applicable to the current military regime in Egypt than to the Muslim Brotherhood is lost on Abdel-Samad. A pronounced friend-foe rhetoric, the dehumanisation of the opponent, recourse to conspiracy theories and a bizarre leadership cult – these are all features of contemporary Egypt under its new strongman, General Abdul Fattah al-Sisi. Nevertheless, to this day, Abdel-Samad has not yet said anything that is truly critical of Egypt's new rulers.

That is no surprise. After all, just like them, Hamed Abdel-Samad is convinced that political Islam must be vanquished by military means – just like European fascism was in the twentieth century. That, however, is a recipe for disaster.

Almost all authoritarian rulers in the region have at one time or another put their faith in this solution and failed. But that does not bother Abdel-Samad in the slightest. We are on the brink "of a battle of apocalyptic dimensions", he recently warned in an interview, with the ice-cold causticity of an extremist. For as soft as his voice may be, his language and his message are hard and belligerent. His example shows that some detractors of political Islam have much more in common with the fundamentalists they criticise than they realise.

Germany's foreign policy is explicitly values-based. But what happens, Ralf Bosen asks, when democracy, the rule of law and human rights collide with the logic of trade and ... END_OF_DOCUMENT_TOKEN_TO_BE_REPLACED

"The people aren’t ready for democracy" has been the constitutional basis for Arab tyranny, its favourite slogan and its sacred narrative for more than a century. Yet, asks Khaled ... END_OF_DOCUMENT_TOKEN_TO_BE_REPLACED

A new global database shows a significant gap in reported COVID-related deaths, suggesting the actual worldwide death toll is short by at least 1 million. That's due in part to ... END_OF_DOCUMENT_TOKEN_TO_BE_REPLACED

Two decades after the attacks of 11 September 2001, the West faces the shattered debris of its failure – not only in Afghanistan, but also in Iraq, Syria, Libya and Yemen. What ... END_OF_DOCUMENT_TOKEN_TO_BE_REPLACED

The coronavirus pandemic has turned lives upside down all over the world. In the Middle Ages, however, people lived with epidemics all the time. The best and most famous ... END_OF_DOCUMENT_TOKEN_TO_BE_REPLACED

In Ancient Egypt, the pharaohs had "solar boats" built to take them into the afterlife. One of these boats was discovered in 1954. It has now been moved to the Grand Egyptian ... END_OF_DOCUMENT_TOKEN_TO_BE_REPLACED

A highly daring review. The

A highly daring review. The book is well researched, based on facts and well founded. To deny the facts on which this book was written implies the negation of historic and scientific analysis on which Abdel-Samad's book has a firm stand. Well worth the read, and respect to Abdel-Samad for a necessary work of clarification for anyone who does not believe in unproven interpretations but is searching for truth based on solid facts.

END_OF_DOCUMENT_TOKEN_TO_BE_REPLACED
Social media
and networks
Subscribe to our
newsletter