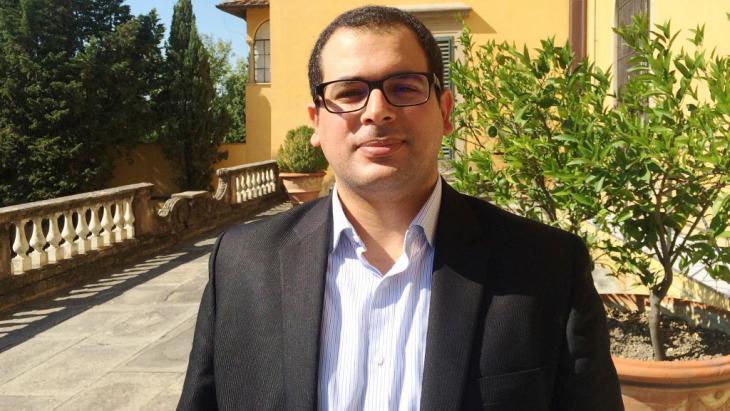 Hamza Meddeb on the "No Future" generation

Political scientist Hamza Meddeb is critical of the Tunisian authorities, which prefer to focus exclusively on security aspects in the war against terror, rather than launching efforts to genuinely address the causes of youth radicalisation. Interview by Sarah Mersch

Anis Amri, the Berlin attacker, was a small-time criminal from Tunisia who was evidently only radicalised once he arrived in Europe. Is this a typical scenario?

Hamza Meddeb: Cases such as that of Anis Amri or Mohamed Lahouiej Bouhlel, the Nice attacker, are very illuminating, because these individuals had no links to terrorists in Tunisia. They were radicalised in Europe. This development forces us to regard violent radicalisation in its overall complexity. These are not just people who were radicalised in Tunisia and whose crimes in Europe are a continuation of this radicalisation, they are people with very different life stories, who initially had nothing to do with terrorism, but who have slipped into jihadism.

Several cities in Europe play a decisive role in this process, for example Milan, which has been home to key Tunisian jihadist networks since the 1990s. Anis Amri also lived there and returned there following the attack. There are also long-established networks in Belgium and France. The globalised life stories of the attackers show us that such radicalisation is a global phenomenon.

Although this is a global phenomenon, the number of Tunisians in these networks is striking. How do you explain this?

Meddeb: To understand the phenomenon, we have to look back at the early years of this century, the final decade of Ben Ali. Two crucial developments were taking place at the time. Firstly, a series of events that politicised Tunisian youth: the second intifada in 2002, the war between Israel and Hezbollah in 2006, the Gaza War of 2008 – with all the significance that Palestine has for anti-imperialism in the region. The invasion of Iraq was also an important moment, because several hundred Tunisian jihadists went to Iraq at this time, despite the repression and the robust police presence of the Ben Ali regime.

This first dynamic was flanked by a second, which should not be forgotten: this was a decade of immense social crisis with high unemployment, primarily among university graduates. It was a decade of social protests that extended beyond the classic political opposition, because the regime was not in a position to offer young people prospects, a future. 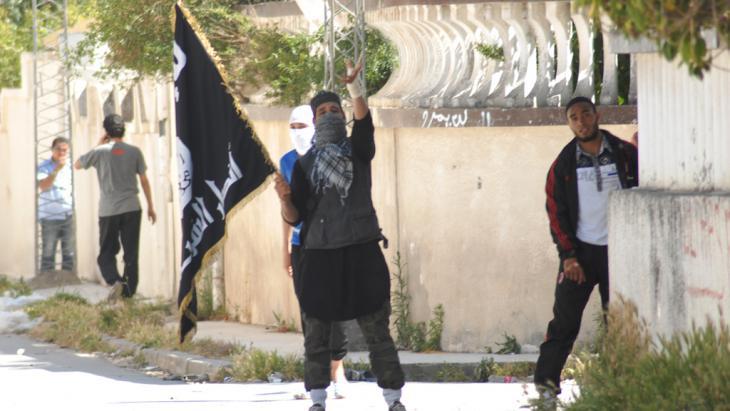 No answers to the younger generation′s crisis of purpose: according to Tunisian political scientist Hamza Meddeb, a "No Future" generation has arisen. "And this 'No Future' generation has opted for what Olivier Roy described as 'No Future' violence, it is descending into nihilism, into violence against society and the state"

So this was a decade of great social crisis. And the regime responded to this crisis with repression. Burgeoning Salafism among young people was countered with the anti-terror law of 2003: at least 2,000 people were sentenced and thrown in jail. And the prisons became hothouses for radicalisation. This was where new jihadists were recruited and others radicalised still further. In this way, prisons became a meeting point for different generations with no previous contact, people whose paths would not otherwise have crossed. Following the 2011 Revolution, thousands of jihadists were freed in a general amnesty. And at the same time, the conflicts began in Libya and Syria. Also, it should not be forgotten that through the 2010/2011 uprising, the state lost its legitimacy and control over the mosques.

So the state is not in a position to provide an answer to the crisis of identity currently felt by Tunisian youth. The social advancement process no longer functions. People go to university, only to join the ranks of the unemployed. They are unemployed because they are not capable of working, because there is an absolute incompatibility between the labour market and the university. There's no longer anything there to mobilise young people and give them hope. According to a recent World Bank report, 33 per cent of young people (between 15 and 29 years old) are unoccupied, that is to say they are not in education, in employment, or in training (known as NEET). This has given rise to a "No Future" generation. And this "No Future" generation has opted for what Olivier Roy described as "No Future" violence, it is descending into nihilism, into violence against society and the state.

In other words, religion is actually just a vehicle to give some sense to this crisis?

Meddeb: Exactly, the radicalisation is not generally the result of long-term religious practice. People are turned within just a few months. They don't have a profound appreciation of the religion, one that could explain how they could arrive at such a violent religious practice. It is frequently small-time criminals who lose their way and Jihad is just an attempt to find an honourable way out of a criminal career. This becomes quasi the classic process and it is therefore very important to understand this crisis within Tunisian youth. 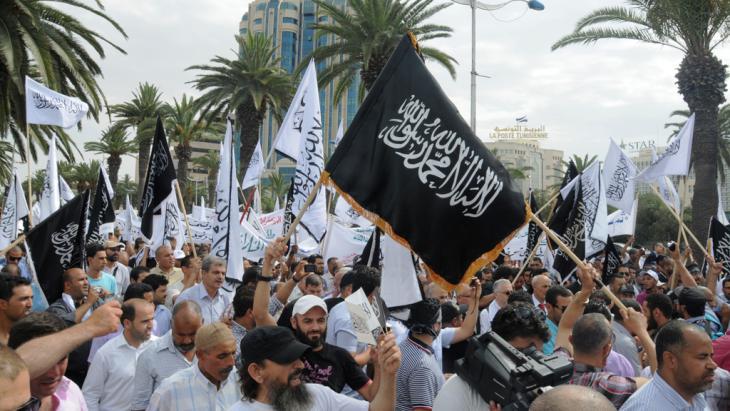 Loss of state control: since the revolution and the toppling of long-time ruler Zine El Abidine Ben Ali in the spring of 2011, Tunisia has experienced an upsurge in Islamism. The chaos that followed the revolution, not to mention the country's economic and social insecurity, laid the foundations for this situation. Since the Arab Spring, more than one hundred soldiers and police officers, some 20 civilians and 59 foreign tourists have been killed

Eighty per cent of those sentenced in Tunisia for terrorist crimes are aged between 18 and 34. Members of the young generation have not been able to achieve social advancement as their parents did. The dictatorship of Ben Ali was a police dictatorship, there was nothing to fill the spiritual vacuum. This facilitated the spread of the jihadist doctrine. We are therefore dealing with an extremely violent interpretation of Islam, which is not being appreciated for what it is, but for what it allows people to do, because it legitimises violence and makes its victim status sacred.

If the Tunisian government is now saying it will deal ruthlessly with returnees and threatens long prison sentences, is it not just repeating past errors?

Meddeb: This is precisely Tunisia's problem. You get the impression that those in government have learned nothing. Prison can only be part of a global solution. Anyone who has committed a crime and who was involved in acts of violence must of course be sentenced. But that can't be all. It is high time that those in government understand that young people need decisions: a sound plan to create jobs, prospects, and reforms, genuine youth and cultural centres. Religious reforms are also urgently needed. Most Tunisian imams are over 60 years old. Just 10 per cent of them have a theology degree and are able to offer some kind of counter-argument to a radical discourse.

What would be a sensible way for Tunisia to deal with the returnees?

Meddeb: There are those who have committed crimes or occupied senior positions within extremist groups. These people must be identified and called to account. In the case of those who are expelled from Europe, judicial co-operation must be improved. What do we do with dual nationals? Where are they being deported? All this needs to be discussed. 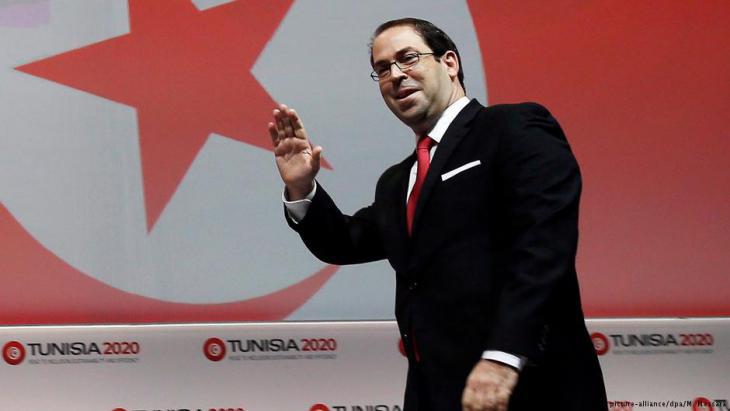 Shirking their political responsibilities: "You can't forbid the jihadists from returning home. Both the constitution and international agreements prohibit withdrawal of citizenship. Tunisian politicians should put a stop to their populism and demagoguery and finally step up to their responsibilities," says Meddeb

How do you explain the impassioned debate currently being conducted in Tunisia on the subject of returnees?

Meddeb: There's no consensus over how to tackle the problem. As soon as the discourse touches on the role of political Islam, society is polarised. And the debate is always focused on security aspects. Returnees are criminals and terrorists and should therefore stay away. People look for an easy solution. But a complex, global problem such as this requires an interstate solution. Also, you can't just take small-time criminals back without surveillance. They will either cause problems here or try to return to Europe. Global problems also need global solutions and international co-operation must be consolidated. Otherwise, before long we'll be dealing with human time bombs that explode either here or somewhere else.

You can't forbid the jihadists from returning home. Both the constitution and international agreements prohibit withdrawal of citizenship. Tunisian politicians should put a stop to their populism and demagoguery and finally step up to their responsibilities.

Do you get the sense that voices such as yours are still being heard within this agitated discourse?

Meddeb: Unfortunately not. The debate is far too polarised for that. We now have the seventh prime minister since the Revolution and the average shelf-life of a government is less than a year. Violent extremism will not be solved by leaving society to confront its own demons. Those in power are simply managing the status quo. This makes the situation all the more fragile, because we're just perpetually going around in circles.

Liberal Islam: everything revolves around the Koran. In the search for a liberal interpretation, peculiar constructs occasionally emerge. By Alexander Flores END_OF_DOCUMENT_TOKEN_TO_BE_REPLACED

EU parliamentarian Dietmar Koester criticises the Union's failure to speak up when faced with human rights abuses committed by its Middle Eastern allies, while pointing out that ... END_OF_DOCUMENT_TOKEN_TO_BE_REPLACED

In her third and most recent novel, Paris-based Algerian author Kaouther Adimi writes almost prophetically about a rebellion by a handful of children against the rigid and ... END_OF_DOCUMENT_TOKEN_TO_BE_REPLACED

Mass protests began in Egypt on 25 January 2011. They triggered the overthrow of long-time ruler Mubarak. Ten years later, many human rights activists and journalists are in ... END_OF_DOCUMENT_TOKEN_TO_BE_REPLACED

Mass protests began in Egypt on 25 January 2011. They triggered the overthrow of long-time ruler Mubarak. Ten years later, many human rights activists and journalists are in ... END_OF_DOCUMENT_TOKEN_TO_BE_REPLACED

As the photo of Fairouz talking to French President Emmanuel Macron spread around the world, many asked if Arabs today had any contemporary stars of Fairouz's standing. In this ... END_OF_DOCUMENT_TOKEN_TO_BE_REPLACED
Author:
Sarah Mersch
Date:
Mail:
Send via mail

END_OF_DOCUMENT_TOKEN_TO_BE_REPLACED
Social media
and networks
Subscribe to our
newsletter