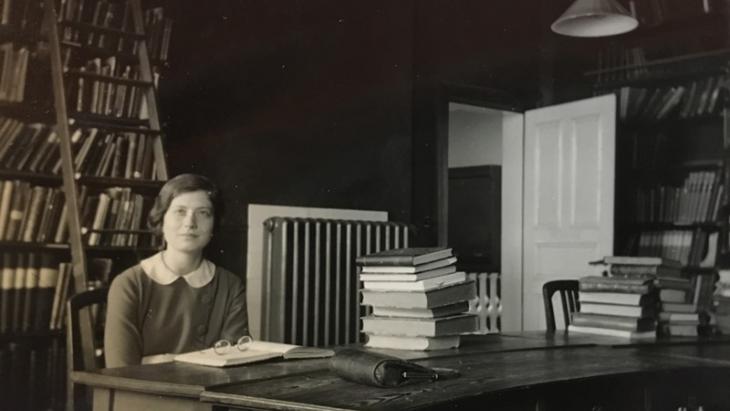 During the Nazi period, Hedwig Klein worked on a dictionary intended to help with the translation of Hitler's diatribe "Mein Kampf" into Arabic. But it didn't help the Arabist: she was murdered in Auschwitz in 1942. The dictionary, however, remains a bestseller – with no mention of Klein’s fate. By Stefan Buchen

"Allah will help me." Hedwig Klein, a 27-year-old native of Hamburg, is feeling confident. She is an Islamic studies scholar who had been planning to make a career for herself at Hamburg University. But there is an insurmountable obstacle in her way: Hedwig Klein is Jewish. On board the steamer Rauenfels, she writes a postcard to the man in Hamburg who helped her escape, Carl August Rathjens.

"I feel very comfortable on board in this good weather and at the moment am not worrying about the future." The postcard is dated 21 August 1939. The ship had left Hamburg two days previously, heading for Bombay in India. Rathjens, an economic geographer with contacts in many different countries, had managed to get the persecuted Jewish woman a visa for the British colony.

Salvation seemed so close, but it was to remain elusive. Hedwig Klein’s attempt to emigrate failed. The last hope of the Hamburg Jew would ultimately hinge on helping spread anti-Semitism in the Arab world. She ended up working on a dictionary that was intended to serve as the basis for the translation of "Mein Kampf" into Arabic.

Born in 1911, Hedwig Klein was the second daughter of the oil wholesaler Abraham Wolf Klein and his wife Recha. She lost her father before she had even turned five – he was killed in early summer 1916, fighting on the eastern front in the First World War.

A race against time

The semi-orphaned Hedwig Klein attended school in Hamburg, took her leaving exams in 1931 and applied to the university to take Islamic studies, Semitic studies and English philology. Her student card still exists. Under career ambition, she wrote "academic librarian".

After the National Socialists came to power in 1933 and began excluding Jews from society, Klein’s university career became a race against time. 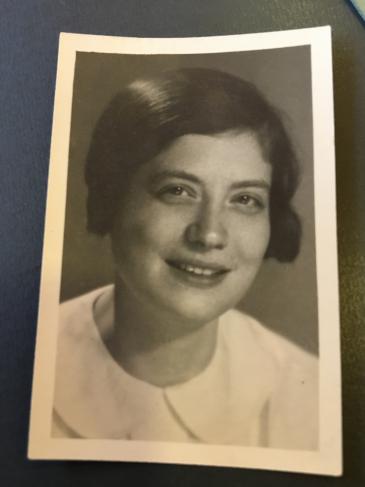 Hedwig Klein was born in 1911, the second daughter of the oil wholesaler Abraham Wolf Klein and his wife Recha. She lost her father before she had even turned five. Attending school in Hamburg, Hedwig took her leaving exams in 1931 and applied to the university to take Islamic studies, Semitic studies and English philology

She finished her doctoral thesis in spring 1937: the critical edition of an Arabic manuscript on early Islamic history. Hedwig Klein applied to sit the necessary exams. In the philosophy faculty office she was informed that, owing to a decree issued by the Minister for Education and National Culture on 15.4.1937, Jews could no longer be entered for doctoral examinations.

Hedwig Klein fights. On 3.5.1937 she sends a letter to the deacon, beginning with the words: "I, Hedwig Klein, a Jew with German citizenship…" She explains how much work she has put into her thesis. And she mentions that her father was killed in action, fighting for the German Reich.

The request ends with the sentence: "Since being excluded from taking my doctoral exam would represent a great hardship to me, I ask once again to be admitted for the reasons mentioned above." And in fact, she manages to convince the university authorities: on the list of candidates, Hedwig Klein’s name is followed by the note: "Jew, admitted as an exception."

The two examiners pass her thesis with the top mark: "outstanding". She achieves the same mark in her viva on 18.12.1937. Her supervisor Arthur Schaade attests that the young academic has a "measure of diligence and acuity that one might wish of some older Arabists."

Her thesis is due to be printed in 1938. The PhD certificate has already been drafted. And then the deacon of the philosophy faculty withdraws his "imprimatur". He has made inquiries with a "senior government advisor" in Hamburg and with the ministry on whether it is still possible to confer a doctorate on a Jew. After all, "the Jewish problem in Germany has entered a new phase."

On Kristallnacht – 9.11.1938 – Nazis lay waste to the synagogue next door to Hamburg University. A handwritten note is made on the cover sheet of Hedwig Klein’s doctoral exam file: "No doctoral certificate issued: Jew."

Fariduddin Attar’s "The Conference of the Birds", one of the seminal works of Islamic mysticism, has recently been published in sumptuously illustrated German translation. It ... END_OF_DOCUMENT_TOKEN_TO_BE_REPLACED

Egyptian authorities have Mada Masr in their sights once again after critical reporting. But the editor of the country's last independent news source is adamant they will continue ... END_OF_DOCUMENT_TOKEN_TO_BE_REPLACED

Like Christianity, Europe's history is one of migration. Both have strong roots in the Orient and in cultures thousands of years old. Cultural historian Bernhard Braun invites us ... END_OF_DOCUMENT_TOKEN_TO_BE_REPLACED

Mohamed Abla is the first visual artist from Egypt to be awarded the Goethe-Institut’s Goethe Medal, Germany’s highest honour in the area of foreign cultural policy. Stefan ... END_OF_DOCUMENT_TOKEN_TO_BE_REPLACED

Bachtyar Ali sends the hero of his latest novel – "Mein Onkel den der Wind mitnahm" – literally flying. Jamshid is so thin after his years as a political prisoner that a gust of ... END_OF_DOCUMENT_TOKEN_TO_BE_REPLACED
Author:
Stefan Buchen
Date:
Mail:
Send via mail

END_OF_DOCUMENT_TOKEN_TO_BE_REPLACED
Social media
and networks
Subscribe to our
newsletter