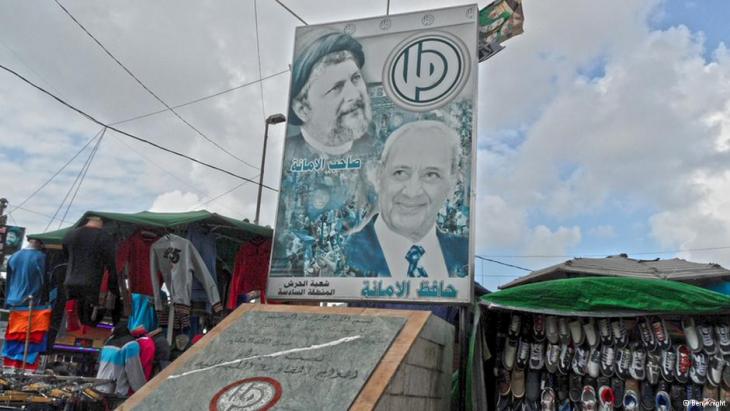 Hezbollah in Lebanon
How Hezbollah is paralysing Lebanese politics

There are few countries in the world where domestic affairs are as affected by regional calamities as Lebanon. With Hezbollah still fighting across the border in Syria and the country's two biggest political alliances at loggerheads about the situation, the government in Beirut is in deadlock. By Ben Knight

Evidence of Lebanon's bewildering political landscape is visible everywhere on the streets of Beirut. The flags and graffiti of the country's 100-or-so political parties decorate virtually every scrap of spare space across the city. The green and yellow flags of the Shia-dominated Hezbollah and Amal parties are strapped to bridge railings with yards of sticky tape, and the slightly disturbing, swirled swastika-like insignia of the Syrian Social Nationalist Party hangs from several lampposts.

At present, there are 21 parties in the 128-seat Lebanese parliament, with a correspondingly diverse set of political agendas and sectarian interests. Most of these parties – as well as many others that are not represented in parliament – are organised into two main groupings: the March 8 and the March 14 alliances. For almost a year, the political fallout from the Syrian war (raging barely 50 miles from Beirut) has left the two in deadlock: the broadly pro-Assad March 8 (which includes Hezbollah) and the broadly anti-Assad March 14 alliances have been unable to agree over Hezbollah's military activity in Syria – an open secret that became less and less secret early last year, until it was officially acknowledged in May, and then became a badge of honour in Beirut.

The deadlock was partially removed last week when a new cabinet was formed under independent Prime Minister Tammam Salam. This cabinet includes ministers from both sides. It was a stopgap solution formed out of necessity, for Lebanon has a number of practical problems to deal with, such as regular power cuts and potential water shortages.

Despite these pressing domestic crises, some March 14 parties refused to take part in any cabinet until Hezbollah had withdrawn from Syria. Says Elie Khoury, international affairs advisor to the Lebanese Forces Party (the second largest Christian party in parliament): "We wanted to have a neutral government, excluding Hezbollah, and excluding us as a party – apolitical, with no politicians, only technocrats."

Other parties agreed to join the cabinet but made the same demands. "We think that Hezbollah should pull out of Syria," says Future Movement MP Jean Oghassapian. "It's not something to discuss." 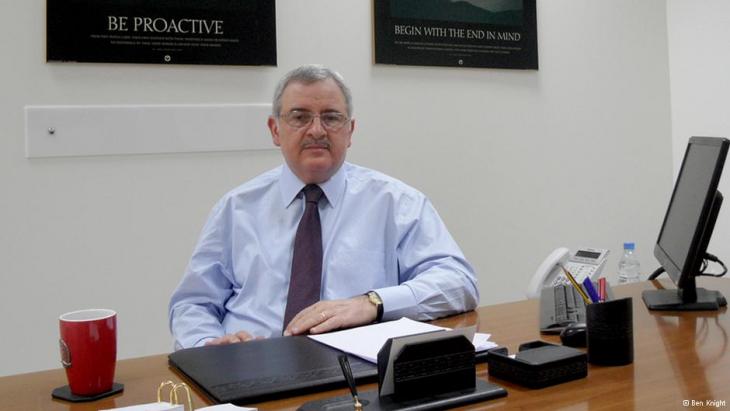 Jean Oghassapian of the March 14 alliance believes that Lebanese politics in not likely to make progress any time soon because one parliamentary grouping will always oppose Hezbollah's involvement in Syria and the other will always serve the Iranian strategy. "We can never have an independent solution in Lebanon that is separate from a solution over all the Middle East"

But even though this government is meant to be short-lived (it is set to end with the presidential election in May), the Syria deadlock has left the government wrangling its way through seven cabinet sessions in the past week as it tries to draft a new policy statement.

There are two main sticking points: the first is the status of the Baabda Declaration, signed by all sides in 2012, which is meant to guarantee Lebanese neutrality in regional conflicts, including therefore Hezbollah's non-intervention in Syria.

President Michel Sleiman last Friday insisted that Baabda was "an invariable principle" of Lebanon's national charter, and Lebanese media reported that Hezbollah was prepared to accept it. Although whether they will respect it is another matter. The second, much more fundamental problem is the so-called "Army, people, and resistance" clause, which guarantees Hezbollah's right to carry weapons and fight independently of the Lebanese army. This has been part of Lebanon's constitutional structure since Hariri's tenure, and is seen as fundamental by Hezbollah not only for its own protection, but for the defence of Lebanon's borders.

But Hezbollah's power is being undermined by increasing violence on three different fronts. Beirut has seen an average of one suicide car-bombing a week since the start of the year – sent by al-Qaida-linked groups from inside Syria against Hezbollah-controlled areas on the border as well as Shia neighbourhoods in southern Beirut – the very heart of Hezbollah's power.

The Syrian conflict has also spread into Tripoli, a city on the coast north of Beirut, where tit-for-tat shootings between Alawite and Sunni communities have occasionally escalated into all-out gun-fights, with the Lebanese army struggling to keep the two sides apart. That is becoming difficult, says Oghassapian, because "the two sides are armed, and the Alawites are supported by Syria and Hezbollah."

What is Hezbollah doing in Syria?

This violence is, of course, having an impact on Lebanon's already fragile economy, but perhaps more crucially, it is also threatening the loyalty of Hezbollah's core constituents in the Shia communities of Lebanon. One of the main reasons that many Lebanese people vote for Hezbollah is that the party makes them feel safe – safer than the Lebanese army can. If that sense of security is under threat, so too are Hezbollah's votes.

Rami Ollaik, a former member of Hezbollah who has written two critical books on his experiences in the party, believes there is a growing concern that Hezbollah cannot hold onto its core voters. "The Shia community is a dynamic community, and they have a lot of reservations and grievances right now," he said. "There are a lot of voices inside Hezbollah questioning the fighting in Syria and assessing the losses, saying 'it's causing us more losses than gains.' But in the end it's a strict organisation." 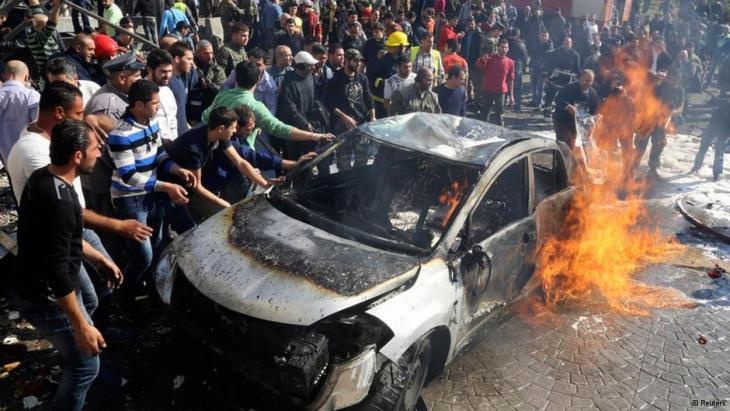 Car bomb attack in Beirut: on 19 February 2014, several bombs exploded close to the Iranian Cultural Centre in a southern district of the city. These attacks are escalating the already tense situation in Lebanon

On the other hand, what is preventing these concerns from surfacing at the moment, according to Ollaik, is the Shia's deep, historical fear of al-Qaida and Salafist extremists. While the March 14 alliance is convinced that the spillover violence inside Lebanon would end – or at least be reduced – if Hezbollah withdrew from Syria, Shia communities have a very different perspective, says Ollaik: "They say 'it's not about Lebanon or Syria; this a threat to our existence', especially because this has been going on throughout their history."

This is borne out by the statements from Hezbollah leader Hassan Nasrallah, who insists that Hezbollah's main concern in Syria is protecting the Shia communities and defending Lebanon's borders. March 14 MP Oghassapian sees this as a flimsy excuse: "Hezbollah said they are in Syria to fight extremists and protect Lebanon, which is not true, because when they started to fight in Syria, the bomb attacks began in Lebanon," he said.

The elephant in the confined space of Lebanese politics is Iran, whose sponsorship of Hezbollah influences all debates in Lebanese politics. Newspaper commentator Michael Young of the Lebanese "Daily Star", wrote recently that Hezbollah's military wing "has been shown to be no better than an auxiliary force regionally for both the Iranian and Syrian regimes."

Khoury, of the Lebanese Forces Party, even questions Hezbollah's loyalty to Lebanon as a nation: "It's part of the military and political structure of Iran." Even though Hezbollah members are Lebanese people, "their soul, their heart, and their mind is somewhere else."

"Just look at the pay-cheques," adds Ollaik. "Everybody, from the secretary-general of Hezbollah to the smallest recruit, they are completely, 100 per cent, on the payroll of the Iranians."

Oghassapian, meanwhile, thinks that even when the current deadlock in the Lebanese government is resolved, Lebanese politics will remain tied to the fate of the whole region. "It won't change anything," he said. "We will always oppose Hezbollah's fighting inside Syria, and they will always continue to serve the Iranian strategy. We can never have an independent solution in Lebanon that is separate from a solution over all the Middle East. It's tied to the Palestinian peace process, to the nuclear arms of Iran, to the conflict between Iran and Sunni countries. And all these are ultimately related to the strategic interests of the United States, Europe, Russia and China."

In Iran, two famous actresses, Hengameh Ghaziani and Katayoun Riahi, were arrested recently. These days anyone who shows solidarity with the protesters is a target to be silenced ... END_OF_DOCUMENT_TOKEN_TO_BE_REPLACED

November 2022 sees the Arab world firmly in the spotlight with the COP27 in Egypt and the FIFA World Cup in Qatar. Public trust in MENA governments is weak, thanks to their ... END_OF_DOCUMENT_TOKEN_TO_BE_REPLACED

With the current leadership of Iran quick to lay the blame for the Iran protests on Israel, the chances of harmonious relations between the two countries still seems remote. Yet, ... END_OF_DOCUMENT_TOKEN_TO_BE_REPLACED

Lamya Kaddor, MP for Germany’s Green Party, visited Qatar with a group of parliamentarians. In interview with Claudia Mende, she advocates a differentiated picture and urges that ... END_OF_DOCUMENT_TOKEN_TO_BE_REPLACED 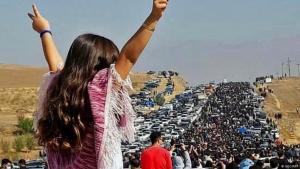 For seven weeks, Iran has been rocked by protests not seen since the Islamic Republic’s inception. This interview with sociologist Asef Bayat, originally conducted in Persian, ... END_OF_DOCUMENT_TOKEN_TO_BE_REPLACED

END_OF_DOCUMENT_TOKEN_TO_BE_REPLACED
Social media
and networks
Subscribe to our
newsletter