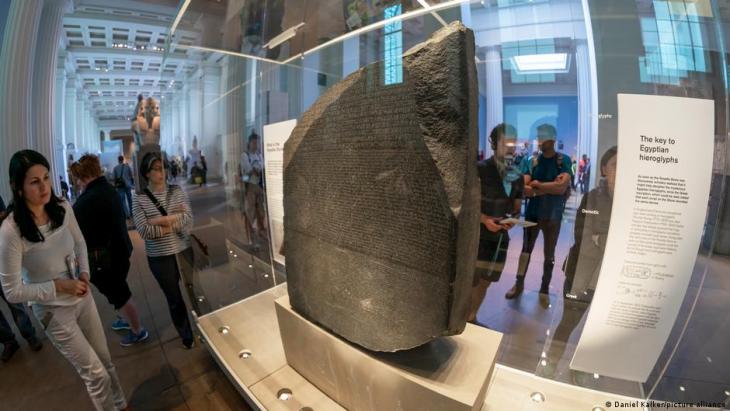 Hieroglyphs exhibition at the British Museum
Museums with guilt complexes

To celebrate the bicentenary of the deciphering of the Rosetta Stone, the British Museum is running an exhibition entitled "Hieroglyphs: unlocking ancient Egypt" until February 2023. While Shady Lewis Botros welcomes the museum's effort to broaden the Eurocentric focus of the exhibition, he says that it "lays bare a critical approach and a potential for revisionism" and remains largely decorative

The great event – the bicentenary of the deciphering of the Rosetta Stone – which both London and Paris are vying to celebrate, opened the door to a competition between the Louvre and the British Museum. The former has already held its own exhibition, which focussed on Jean-François Champollion, the man credited with deciphering the Egyptian hieroglyphs, and his historical role in this groundbreaking discovery.

The British Museum boasts the cachet of actually having the Rosetta Stone in its collection. It views the stone as its most significant historical object for the purposes of tourist promotion. But this exhibition has other concerns beyond mere self-congratulation. 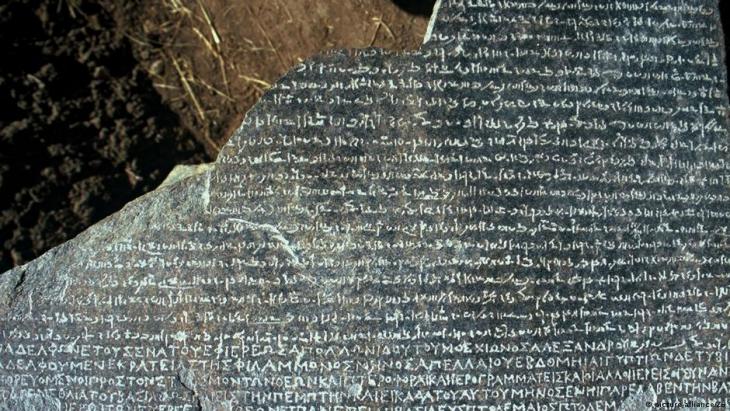 Spoil of war: according to Shady Lewis Botros, the Rosetta Stone is "booty from a double plunder". The French stole the stone from the ruins of a Mamluk castle in the city of Rashid (or Rosetta) during the Napoleonic campaign in Egypt, and the British later seized it from the French

The Rosetta Stone: stolen not once, but twice

The renowned stone remains a spoil of war, in the true sense of the word. Indeed, it is booty from a double plunder. The French stole it from the ruins of a Mamluk castle in the city of Rashid (or Rosetta) during Napoleon's campaign against Egypt. The British fleet stationed off the shores of Alexandria then seized it after a decisive naval battle and protracted negotiations, during which the French threatened to burn or smash the stone.

Sorting, indexing, classifying and preserving were the tools used in the flood of violence and subjugation as Western supremacy took root. The pursuit of knowledge accorded the pretext for subsequent entitlements. Anthropology found easy salvation, reviewing and re-writing its literature to root out racism, framing its future within the boundaries of cultural relativism, and enlarging its fields of study to include Western societies as well. Thus, anthropology came to see everyone equally.

For museums, however, their hopes to atone for past sins faced obstacles. The acquisitions – or booty – in the galleries of museums are as much evidence of the initial crime as they are an indication of on-going violations. To give them up and send them back from where they came would mean the closure of museums. 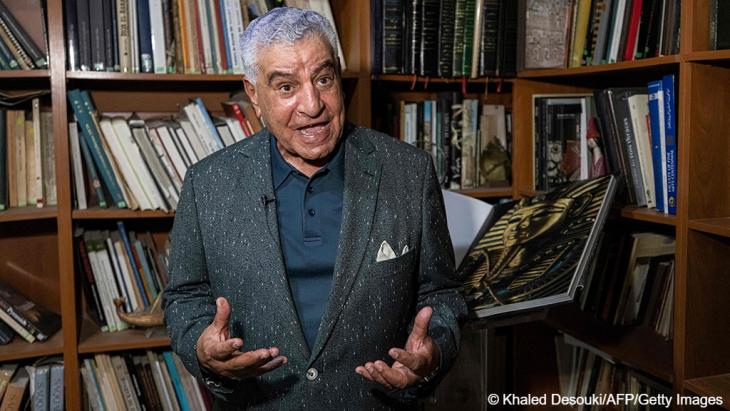 Egypt's former Antiquities Minister Zahi Hawass has called on Egyptians to sign a petition calling for the return of the Rosetta Stone to Egypt. Were this to happen and were other such important artefacts to be returned to the countries from which they were taken, it would have a profound effect on the museums. "The acquisitions – or booty – in the galleries of museums are as much evidence of the initial crime as they are an indication of on-going violations," writes Shady Lewis Botros. "To give them up and send them back from where they came would mean the closure of museums"

Dealing with the colonial guilt complex

The current British exhibition on hieroglyphs deals with this guilt complex by deploying a number of strategies. Firstly, by acknowledgement, which is why one corner of the museum is devoted to acknowledging the act of seizure as the basis for ownership of the stone. The military context of the discovery is chronicled, including details of the object's passage from hand to hand, under fire.

At the same time, the curators are at odds with the enlightened individualistic narrative, which attributes the great discovery to the genius of one person; this narrative explains things away as being based on reason and liberation from traditions and superstitions in favour of modern means of knowledge.

While acknowledging the central role of Champollion in decoding the ancient Egyptian language, the exhibition presents a more complex history. It is not one-directional, but rather encompasses dozens of names and secondary dates in the effort to decipher the hieroglyphs, including Muslim writers, merchants, travellers, forgers, thieves, sorcerers and European soldiers from the Middle Ages, the Renaissance and beyond. They all played a major role in laying the foundations for this breakthrough, alongside a number of researchers from among Champollion's contemporaries and his predecessors.

The voices of the "indigenous" people

Since none of the above is enough to atone for colonial guilt, the curators infuse the exhibition with local elements and the voices of the "indigenous" people. For example, the first gallery presents a brief overview of Rashid (Rosetta), to which the stone is attributed, with contemporary pictures of the town and its inhabitants. The inscriptions beside the objects in the collection are interspersed with quotations by professors of archaeology and Egyptology at Egyptian universities.

Among the objects on display are ancient Arabic books that include tables of the pharaonic alphabet, as well as drafts of the first hieroglyphic-Arabic dictionary, compiled by the first Egyptian to manage the Antiquities Authority.

In the last section of the exhibition, recordings of Coptic hymns from the Orthodox liturgy can be heard in the background. The inscription contains the name of the cantor and a description of the role of the Coptic language and clergy in the success of Champollion's mission. 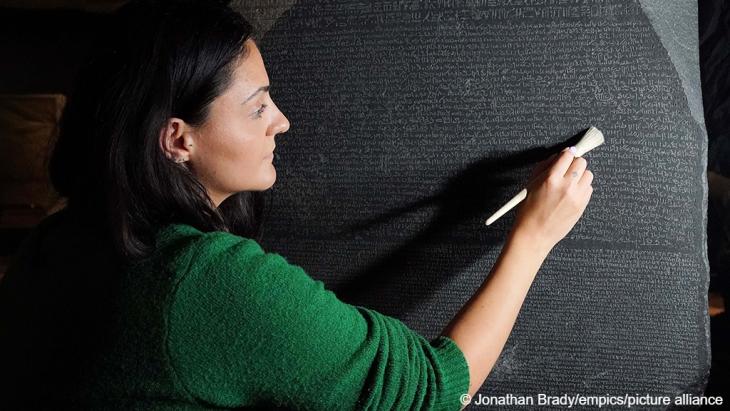 The Rosetta Stone was discovered in Rosetta (Rashid) in the Nile Delta by French officer Pierre- François Bouchard in 1799. It has been on display at the British Museum since 1802. "Marking 200 years since the decipherment of Egyptian hieroglyphs, this major exhibition takes you through the trials and hard work that preceded, and the revelations that followed, this ground-breaking moment," says the British Museum

An attempt to broaden the Eurocentric focus

The most perplexing aspect of the exhibition comes in the form of cards that are set out next to the exhibits. They contain pictures of children from schools in Rashid, with their answers to questions about the meaning of certain ancient Egyptian symbols: "This looks like a helicopter", "This is festive cake or the sun" and "This is a beetle."

While this effort to broaden the Eurocentric focus lays bare a critical approach and a potential for revisionism, it remains largely decorative. For example, quotes by Egyptian university professors add little, as they are only the briefest of comments or footnotes about Champollion. No doubt they were lifted from Western sources.

The pictures of smiling school children and their light-hearted comments add a lighter tone to the exhibition, and they are used effectively to provide a break from the deluge of information that accompanies each item in the collection. Alas, they inadvertently end up – alongside many of the exhibits – underlining the position of the "locals" in the hierarchy of knowledge and value, exactly as it used to be in past times.

The devaluation of the Egyptian pound combined with rising food prices is taking its toll on Egypt. More and more people are slipping into poverty. Karim El-Gawhary reports from ... END_OF_DOCUMENT_TOKEN_TO_BE_REPLACED

Egyptian Sufis have been on the defensive against the country's Islamists for decades. Meanwhile, interest in mysticism is growing among the young members of Cairo’s middle and ... END_OF_DOCUMENT_TOKEN_TO_BE_REPLACED

Abortions are illegal in Egypt unless they are necessary to save a married woman's life. But that doesn't stop local women from having one. Egyptian society needs to acknowledge ... END_OF_DOCUMENT_TOKEN_TO_BE_REPLACED

Food prices doubled, salaries halved, banks restricting withdrawals: Egyptians now have the same problems as the Lebanese. But if things get worse here, the fallout will be far ... END_OF_DOCUMENT_TOKEN_TO_BE_REPLACED

Giessen, Eichsfeld, Kusel, Berlin – cars bearing old German number plates are the latest trend on the streets of Cairo. Many Egyptians regard the discarded plates as chic. What ... END_OF_DOCUMENT_TOKEN_TO_BE_REPLACED

END_OF_DOCUMENT_TOKEN_TO_BE_REPLACED
Social media
and networks
Subscribe to our
newsletter