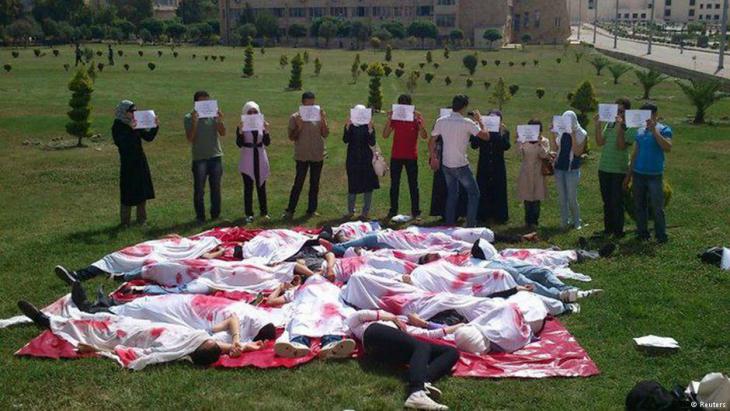 The impact of the war on under-funded Syrian universities has been manifold. Yet German education authorities remain unperturbed by the current proliferation of forged Syrian certificates. By Joseph Croitoru

One devastating consequence of the war in Syria is the alarming state of the country's universities. But even before the conflict, which has driven some five million Syrian citizens into exile, among them countless lecturers, students and potential students, these institutions were not without their problems.

Despite the fact that in the Arab world, Syria is regarded as having the most comprehensive school and university education, even years after the foundation of the nation in 1946, it still only had one university – the University of Damascus, which dates back to 1923. It was 1958 before Aleppo University was founded; then, as part of the consolidation of the Baath regime under Hafiz al Assad, two further universities were established in Latakia and Homs in the 1970s.

Under the government of his son Bashar, not only have three more state universities opened, but also 20 private universities. The new private sector institutions were only partially able to relieve the pressure on state educational establishments – pressure that continued to grow as a result of laws guaranteeing a study placement to all. One of the reasons for this was that while the state universities only levied symbolic tuition fees, private university fees were well above what most students could afford.

Even before the Arab Spring, this situation resulted in massively crowded lecture theatres. Thus in 2012 most of the remarkable 33 percent of young Syrians who were attending university were registered at a state institution. 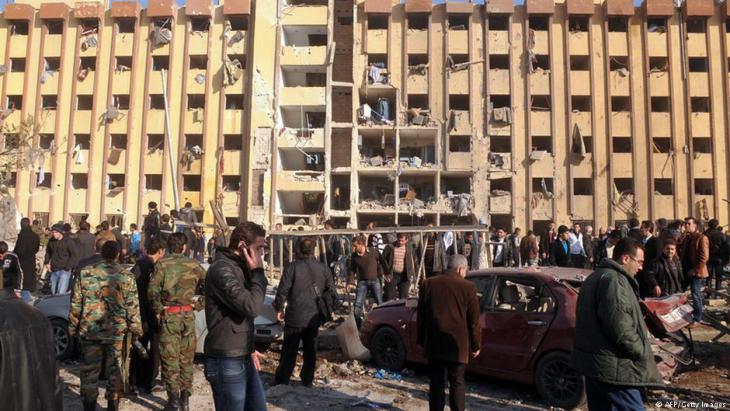 University communities bear the brunt of Bashar al-Assadʹs wrath: according to the Syrian Network for Human Rights, 1,629 students were killed in attacks and raids by government troops during the first two years of the civil war. The same period saw the imprisonment of a further 35,000 students; of these nearly 100 died as a result of torture in detention

Back then, the system was already being criticised for its outdated curricula and tuition methods that prioritised memorising passages from text books. A rigidly traditional teaching style was the rule; free and intensive exchange with lecturers was rarely possible. One of the reasons for this was that the latter were so badly paid they were often working in two jobs, leaving them little time for student supervision. Criticism of the Assad regime was not tolerated. From 2011 onwards, any students or university lecturers who dared lobby for greater freedoms rapidly became the victims of brutal repression – as did school pupils.

During the civil war, a number of universities were caught in the crossfire and occasionally even came under direct fire themselves. In addition to the university in the embattled city of Aleppo, the state Al-Furat University in the eastern Syrian city of Deir al-Zour was also affected, when battles broke out there between government troops and the rebel Free Syrian Army. Later, the campus was also regularly bombed by the "Islamic State" terror militia, which invaded the area and attacked government positions.

It was a similar picture at other universities. By the year 2013, the Syrian Network for Human Rights issued a shocking assessment of the repression suffered by members of university communities during the first two years of the civil war at the hands of the regime alone. During this period, 1,629 students were killed in attacks and raids by government troops. 35,000 students were imprisoned; of those nearly 100 died as a result of torture in detention.

Thousands and thousands of students who took part in the rallies against the regime – the protesters frequently beaten and maltreated by Assad's henchmen – were expelled from their universities. Some of the raids were also accompanied by punitive actions such as shelling and the destruction of university equipment. 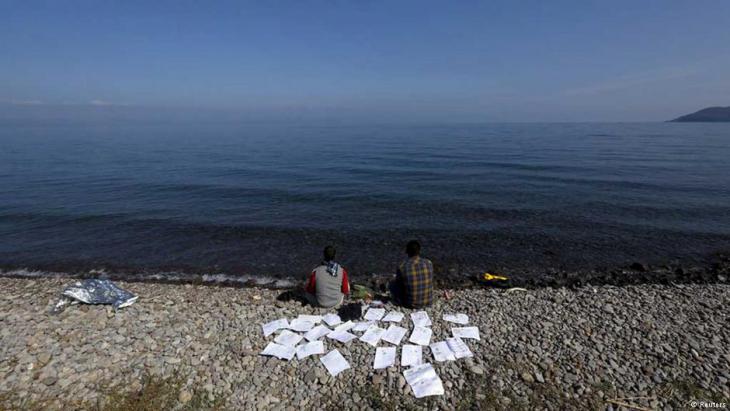 On the way to a new life: two Syrian refugee students dry their documents on a beach on the Greek island of Lesbos in October 2015. With teaching suspended in Syria and university funding at an all-time low, an increasing number are either already studying or preparing to study in Germany. In recent years the figure has increased five-fold, from just over 2,000 to an estimated 11,000

University buildings were sometimes commandeered by the army as military posts. Students were obliged to help in the setting up and securing of these army bases and were even forcibly recruited to take part in "support marches" for Assad.

Overall, the war years have resulted in a large-scale dilution of Syria's university landscape. According to domestic media reports, student numbers have slumped, with a fifth of lecturers thought to have left the country. It appears the war is only partially to blame for this. Another reason is the successive reduction in state funding to university education.

While still at almost three-quarters-of-a-million U.S. dollars in 2010, by 2017 the sum had sunk to a record low of just under 175,000 dollars. Because teaching had to be suspended for longer periods of time at those universities especially hard hit by the conflict, students began streaming into the capital, overloading the state University of Damascus as a result.

It appears to be difficult to come up with a simple solution to this crisis, which both Syrian and foreign observers believe is likely to persist for years to come. For several years now, fraudsters have known how to exploit the students' misery for their own gains, peddling forged school-leaving certificates and academic references. The phenomenon seems to have exploded recently and is currently making headlines not just in Syria, but also in neighbouring nations.

Yet there are different readings of the situation according to political standpoint.

For example, official Syrian government media recently reported on forger gangs from Turkey, who are now not only offering their services to Syrian migrants, but also to people still waiting to leave Syria.

Coverage of the story also appeared in Arab media critical of the Assad regime. But they also included reports about senior members of the governing Syrian Baath Party who have had to resign after it was revealed that they had acquired their doctorates illegally.

All of which gives rise to the question of how far this problem pertains to Syrians studying, or preparing to study, in Germany. Their number has increased five-fold in recent years, from just over 2,000 to an estimated 11,000. Moreover, this figure looks set to rise still further.

The German authorities responsible perceive the problem of forged Syrian certificates as negligible. At the assembly of German state education ministers, the Central Office for Foreign Education would only reveal that "it was of course fully aware of the issue of forging educational qualifications, a problem that can occur wherever you are in the world". This national competence centre for the German states refused to be drawn on the question of recognising foreign education certificates with specific reference to Syria. 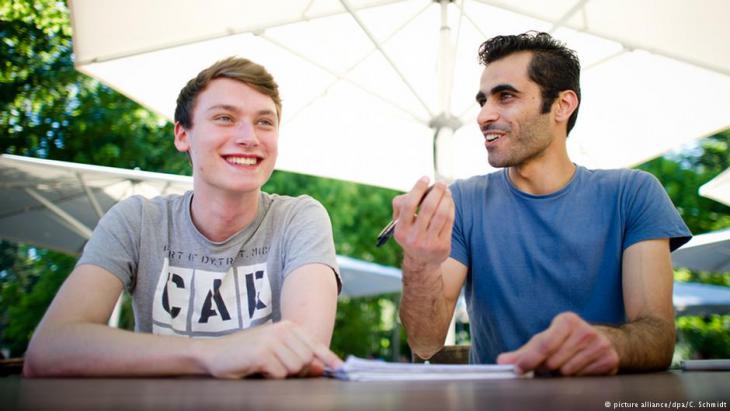 Playing down the problem: Germanyʹs Central Office for Foreign Education remains relaxed in the face of fake documentation rumours, saying that "it is of course fully aware of the issue of forging educational qualifications – that can occur wherever you are in the world". Concerned Syrian students argue, however, that either their qualifications are not being recognised by the German authorities, or that the recognition process is taking an extremely long time

The forged certificate problem is overstated

According to information from the German Academic Exchange Service (DAAD), the verification of Syrian scholarship holders is carried out by the universities with the help of a thorough authentication procedure that hampers attempts at forgery. The DAAD said it is aware of only a handful of pertinent cases that, in view of the huge number of Syrian students, could almost be considered negligible.

The DAAD added that there have also been no reports of any such issues from the national body in place to support foreign students in their application to German universities (uni-assist). Christian Hulshorster, DAAD regional director for scholarship programmes in the south of the country, told Qantara.de that the phenomenon of forged certificates is overstated.

Those who have read the Arab media reports and also European portals such as "Infomigrants", which addresses the concerns of migrants, may be tempted to take such assurances with a pinch of salt. Syrians who have either already graduated from university in their home country, are studying or are preparing to pursue a degree course in Germany, have complained on Infomigrants that their qualifications are not being recognised, or that this recognition process is taking a very long time.

A claim is also circulating that in 2016, the German government appealed to the Syrian education ministry in order that they might join forces to tackle the problem of forged certificates. When enquiries were made however, the German Foreign Ministry said it had no knowledge of any such exchange with the Syrian side on the issue of forged educational qualifications.

The disappearance of Razan Zeitouneh and her colleagues has been one of the greatest mysteries of the Syrian war – until today. DW's investigative unit hunted clues across six ... END_OF_DOCUMENT_TOKEN_TO_BE_REPLACED

Muslims in Europe regularly experience threats, witness attacks and are the target of hate across national borders. Now the Council of Europe, the continent's leading human rights ... END_OF_DOCUMENT_TOKEN_TO_BE_REPLACED

The West is pulling out of Afghanistan after 20 years, but the conflict remains – and the Taliban are stronger than they have been for a long time. And now? The renowned Taliban ... END_OF_DOCUMENT_TOKEN_TO_BE_REPLACED

United States and NATO troops are leaving Afghanistan after 20 years, despite the fact that the Taliban is still advancing. The German Bundeswehr is already out. Sandra Petersmann ... END_OF_DOCUMENT_TOKEN_TO_BE_REPLACED

END_OF_DOCUMENT_TOKEN_TO_BE_REPLACED
Social media
and networks
Subscribe to our
newsletter