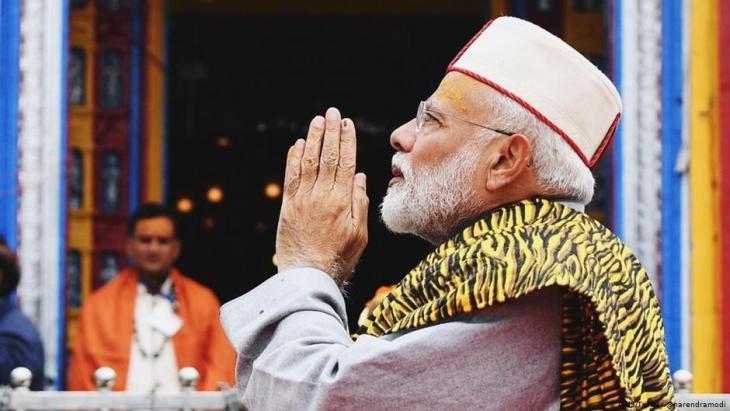 India is following an international trend: with the victory of the Indian Peopleʹs Party or BJP, we are again witnessing the success of a party that can clearly be located on the extreme right of the political spectrum and that is at the same time courted by international companies and economic heavyweights. By Dominik Muller

It is members of the nationʹs ethnic minorities who will pay the price for this success. Already during the last legislative period under Prime Minister Narendra Modi (BJP), we saw a clear increase in the number of lynchings carried out against Muslims and Dalits (previously referred to as "untouchables"). Many of these killings go unpunished, in many cases the perpetrators were even hailed as heroes by BJP politicians.

News that the BJP under Narendra Modi would yet again secure the majority in the Lok Sabha, the Indian lower house of parliament, prompted the immediate gain of bonds and the Indian rupee. The 2014 elections had already marked a turning point: For 30 years, no party in India had succeeded in securing an absolute majority. Now, the BJP has consolidated that majority by a further 21 parliamentary seats: from 282 to 303 seats.

This despite the fact that during the last legislative period, the Modi government did not even come close to fulfilling its declared election promise under the slogan "Ache Dhin", or "The Good Days Are Coming": the devaluation of a large amount of Indian cash, mandated and carried out effectively overnight in late 2016, plunged first and foremost the poorest members of society into even greater poverty.

Whatever happened to the promised Indian job miracle?

The introduction of sales tax and VAT put particular pressure on street trading – after farming the populationʹs most important source of income. The farmersʹ debt burden continued to increase and is viewed as the key driver in the perpetual rise in the number of suicides in India. 600 million of the 1.3 billion Indians are under 25 – but the job miracle they were promised has failed to materialise.

Even the mobilisation of large-scale protests against government policies clearly did little to influence the poll: the major farmersʹ protests last December and the two-day general strike in January, in which around 180 million Indians took part.

So despite all this, how did the BJP succeed in winning the elections – although in December it lost regional polls in three states thought to be a shoe-in? 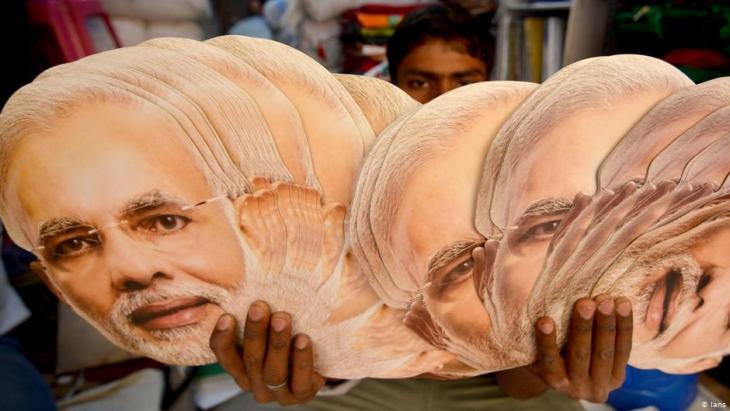 Modi is everywhere: Narendra Modi is omnipresent in the public sphere and social media: the BJP is better than any other party at harnessing the power of Twitter, Facebook and Whatsapp for its own ends. The same goes for private electronic media and its huge Indian audience: first and foremost "Network 18" with its television programmes, magazines and Internet pages, which became the de facto propaganda machine for the BJP

Firstly, through a strongly personalised election campaign customised to Modi. Over recent months he made around 200 appearances in which he made no mention of his bad performance and instead of "development" and "Ache Dhin", switched to the keyword "security". The rhetorically skillful Prime Minister has always preferred to appear in public in this manner, while not even allowing interviews with critical journalists and not facing questions from opposition politicians in parliament.

In doing so, Modi presents himself as supreme “guardian”; together with his associates he stylised the Hindu majority as the victim of Islamist conspiracies and terrorist attacks controlled from Pakistan.

Secondly, the first-past-the-post voting system and the weak opposition contributed to the BJP success. Most of the 80 percent of Indians assigned to the Hindu religion are not supporters of the BJP: of the 604 million people who cast their ballot, a third voted for the Hindu nationalists. In view of the fragmented and weak opposition this was enough to attain an absolute majority.  The Congress Party was able to capture a larger share of the vote in comparison to 2014, but its performance was a far cry from the successes of the past.

India's ruling political party Bharatiya Janata Party (BJP) is inspired by the ideology of Rashtriya Swayamsevak Sangh (RSS). Its core philosophy revolves around the idea of a ... END_OF_DOCUMENT_TOKEN_TO_BE_REPLACED

Hindu fundamentalist Ashok Sharma has devoted his life to championing the deeds of an Indian "patriot": not revered independence hero Mahatma Gandhi, but the man who shot him dead END_OF_DOCUMENT_TOKEN_TO_BE_REPLACED

At the end of every year, the team at Qantara.de gives you a run-down of the ten most-read articles on the site over the past 12 months. Here is a quick overview of the stories ... END_OF_DOCUMENT_TOKEN_TO_BE_REPLACED

COP27 in Sharm el-Sheikh is turning into a PR disaster for Egypt’s military regime. Instead of praise for the host, the news is full of solidarity for imprisoned activist Alaa ... END_OF_DOCUMENT_TOKEN_TO_BE_REPLACED
Author:
Dominik Müller
Date:
Mail:
Send via mail

END_OF_DOCUMENT_TOKEN_TO_BE_REPLACED
Social media
and networks
Subscribe to our
newsletter