A Circus for Deniers

The "Holocaust Conference" in Teheran was less a meeting of minds and more of a "traveling circus" of Holocaust deniers who are not taken seriously anywhere, says Peter Philipp 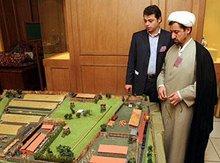 Those in Iran interested in history are well aware that Ahmadinejad's doubts about the Holocaust are a completely unsubstantiated provocation, Peter Philipp says

​​In the past few days, Iranian authorities have once again launched an attack on the Internet, blocking access to sites critical of the regime, those discussing movies and books and even to the free encyclopedia
"Wikipedia."

In stark, albeit macabre contrast to those actions are the official explanations given for holding a "Holocaust Conference": The government in Teheran wanted to offer scientists from around the world the opportunity to say things about the Holocaust which they are not permitted to say in their home countries.

The people who gathered in Teheran for the conference were hardly "scientists," and instead more like the normal traveling circus of Holocaust deniers who are not taken seriously anywhere.

They are also those for whom one is only doing a favor when one approves laws banning the notion of the "Auschwitz lie." Without the law suits which ensue, these people could not keep defining themselves anew and would be reduced to accepting what they actually are: sad lunatics.

Iranian President Mahmoud Ahmadinejad must be in a pretty poor position if he is forced to rally support from that league to further his political goals. Those in Iran interested in history are well aware that Ahmadinejad's doubts about the Holocaust are a completely unsubstantiated provocation.

He is not interested in revealing historical truth, but rather, in exposing Israel as an unjustified product of what he considers a genocide fallacy in order to strengthen his demands of abolishing Israel.

How grateful the president must have been that a handful of ultra-orthodox Jews were present in the conference hall in Teheran. He did not notice, however, that it was precisely these participants who exposed the dismal strategy of the conference organizers.

They did not deny the Holocaust, but they did stress that they reject Israel as a nation. Orthodox Jews believe that the Jewish State may only evolve following the coming of the Messiah.

A hero only to scatterbrains

Contrary to his portrayals of himself: Mahmoud Ahmadinejad is no Messiah. His agenda is damaging to Iran, he forces level-headed Iranians into desperation and he intimates people abroad who speak up for the legitimate interests of Iran.

He will not, however, abolish Israel as he proceeds in this vein, and will not solve the Israeli-Palestinian conflict. And only scatterbrains among Palestinians and others in the Arab world will consider Ahmadinejad a hero.

Most of these people have long been realistic enough to accept facts – such as Israel and the Holocaust – and to demand a historical compromise for the Palestinian people so that Palestinians and Jews can finally live in peace and harmony.

Peter Philipp is Deutsche Welle's chief correspondent and an expert on the Middle East.

National Socialism
Are Arabs Turning a Blind Eye to History?
A recently published study conducted by the Centre for Modern Oriental Studies in Berlin illustrates the complexity of the relations between Arabs and National Socialism. Lennart Lehmann read the study for Qantara.de.